Hello from Divine Mercy Hills in El Salvador City on Mindanao Island! Brother James Cervantes, MIC, and I are currently in the Philippines for our summer ministry. Last year, with three Polish priests serving in two different locations, the Marians of the Immaculate Conception opened a new mission helping to spread Divine Mercy and devotion to Mary Immaculate in this island nation. The first location is at the Archdiocesan Shrine of The Divine Mercy in Mandaluyong City in Metro Manila. The second location is at Divine Mercy Hills on Mindanao Island. Father Mariusz Jarzabek, MIC, is assigned in Mandaluyong City, and Fr. Jan Migacz, MIC, and Fr. Walerian Pozniak, MIC, are assigned here in Mindanao.

Brother James and I arrived in Manila on June 5 and visited briefly with Fr. Mariusz in Mandaluyong. We traveled from Manila to Cagayan de Oro, Mindanao on June 6. We will spend five weeks in Mindanao and then three weeks in Manila before going back to Washington, D.C., on Aug. 1. While we are here in the Philippines, Br. James and I will be giving talks to the local schools to help promote vocations to the Marians. The schools here just resumed classes this past week.

We have been here in Mindanao for two weeks now.

I must admit that the first week here was a little difficult in terms of trying to adjust to the warm and tropical climate (the humidity is like a coat that covers you), the cold showers (if that doesn’t wake you up in the morning, nothing will), the bugs (especially those darn mosquitoes), the gecko lizards (who speak with an Australian accent and keep trying to sell me auto insurance — OK, not really) and the roosters (no need for an alarm clock here), among other things.

However, the people have been kind and generous and welcoming to Br. James and me. At first, they questioned whether we actually were Filipino. Indeed, we are. But we must seem quite Americanized to them. Also, it doesn’t help that neither of us speaks or understands the local dialect here, which is Visayan. As for Tagalog, the national language in the Philippines, we cannot speak it fluently, either. However, many Filipinos can speak and understand English fairly well. But I still feel bad that I can’t talk fluently in the native languages.

Within the Heart of Jesus

Divine Mercy Hills here in Mindanao is home to a 50-foot-high statue of Jesus as The Divine Mercy. It’s currently the tallest statue of The Divine Mercy in the world. The statue is quite impressive in person, and it directly faces the ocean. The red and pale rays are actually staircases that lead up to the heart of Jesus. In the heart is a tiny Eucharistic chapel where the Blessed Sacrament can be reserved. I had the chance to visit it for the first time on June 19, the Feast of the Sacred Heart of Jesus. Spiritually, I felt like I was nestled within the Heart of Jesus as I looked out into the ocean of His mercy. As I stood there, I could not even begin to comprehend the depths of His loving mercy towards us — especially to weak and little souls.

On weekday afternoons, the Rosary is prayed at 2:30 p.m.; the Chaplet of The Divine Mercy is prayed at 3 p.m.; there is exposition of the Blessed Sacrament and Benediction; the Holy Mass is celebrated at 3:30 p.m. and is followed by vespers (evening prayer). On Saturday, there are two Masses, at 8 a.m. and 4 p.m., along with the prayer devotions in the afternoon. Following the 8 a.m. Mass there is a Rosary procession with a statue of Our Lady of Fatima. On Sunday, there are three masses at 7:30 a.m., 10 a.m., and 3 p.m., along with the prayer devotions in the afternoon. After each Sunday Mass there is the veneration of the image of The Divine Mercy. Religious articles are also blessed by the priests at the end of each Mass, and confession is heard daily. On Saturdays, a prayer intercessory group meets, and orientation meetings are held for pilgrims.

The Masses are celebrated in Visayan and English in an outdoor hut that serves as a chapel. (There are plans to build a permanent church building by next year.) Father Jan recently went to Davao to learn the Visayan language, and he can now speak the language fairly well. He has even delivered some of his homilies in the language. Before the beginning of each Mass, people’s prayer intentions are read aloud. The Filipino people are very fervent in their faith, and they actively participate in the Mass. Plus, the singing at the Masses is heavenly.

A Blessing in the Hills

The Marian priests are currently renting a house here on the property of Divine Mercy Hills. It is a modest home with three small bedrooms and a small chapel where the Blessed Sacrament is reserved. There is a living room, a kitchen, and a bathroom. The house overlooks El Salvador City and nearby Cagayan de Oro and the ocean. Being close to the ocean helps, especially when it’s hot and humid and a cool ocean breeze comes in. It’s a blessing. In addition to the house, there is also a guest cottage with two small bedrooms and a bathroom. The immediate plan is to build a large Marian House of Formation for the priests and seminarians.

There are a lot of stray dogs that roam the property, and recently the priests ended up adopting one as a pet. Her name is “Dog” (or “Dawg”), and we’re not sure what kind of dog she is. (Many of the dogs here are mutts.) Right now, Dog is nursing two puppies that she recently gave birth to. Father Jan affectionately looks after the puppies and gave them a bath when he discovered that they had fleas.

Our lunches and dinners are provided by a local restaurant. The meals are simple and often consist of rice, fish, and vegetables (and meat, sometimes). For dessert we usually have plenty of fruit (mangoes, avocadoes, bananas, pineapples, guavas, papayas, watermelons, coconuts). When we have leftover rice, Br. James and I will sometimes make fried rice with it.

We currently have one Marian postulant here in the Philippines — Bart Lapus. He entered the postulancy here in El Salvador in December of last year and will go on to the novitiate in Washington, D.C., in August. Bart was still here in Mindanao until recently. Last week, he went to Manila to go on vacation. He will be traveling with Br. James and me when we go back to Washington, D.C.

On the Vigil of the Feast of St. Anthony of Padua, we went into Cagayan de Oro and attended a Mass at St. Anthony of Padua Church. Afterwards, there was a big feast complete with “baboy lechon” (whole roasted pig). You should have seen how everyone just ravaged the buffet table (“eat and destroy”). When it comes to food, Filipinos are not shy.

As we traveled to the church, we got to see some of Cagayan de Oro. The people are poor here, and they live very simply. Getting around on the roads can be quite an adventure with each vehicle fighting to get ahead of the traffic. Public transportation includes the jeepneys (long jeeps brightly painted with sacred or secular artwork), taxis, buses, motorbikes, and bicycles. The trick is to see how many people can fit into one vehicle. I’ve seen motorbikes with five to six people riding on them at once. It is quite a sight to see.

You may be asking what a typical day is like for Br. James and me here at the shrine. On the weekdays, we begin with morning prayers and meditation at 6:15 a.m. I am usually up by sunrise at around 5:30 a.m. (By then, all the roosters are busily crowing.) The sunrises here are absolutely beautiful, and I’ve gone outside quite a few times to see them. After I get up, I take my cold shower, and then I’m ready for prayers. At 7:30 a.m. after prayers and meditation, we have breakfast. The mornings are open. Sometimes Fr. Jan or Fr. Walerian will give Br. James and me a project to work on. Other times we may do some spiritual reading.

At 11:45 a.m., we have mid-day prayers and an examination of conscience, which are then followed by lunch. At around 2:25 p.m, we walk from the house with our umbrellas to the chapel for the afternoon prayer devotions, Holy Mass, and vespers (evening prayer). By the way, Filipinos don’t just use umbrellas for the rain. They also use them as protection from the sun. After all, Filipinos are already naturally tan. Filipinos use umbrellas more for the sun than they do sunglasses around here.

When we get back to the house, we do night prayers at 5:45 p.m., which is then followed by dinner. The rest of the evening is free, and we sometimes spend it just talking around the table. It’s a real blessing that there is no television in the house. It’s one less distraction to worry about. I’m usually in bed by 9 or 9:30 p.m. Believe me, the heat and the humidity can be draining sometimes. Anyway, many of the people here go to bed once it’s dark and then are up by dawn. It’s a totally different lifestyle. The weekends vary with the different Mass schedules, but we basically keep the same prayer and meal schedule in the house. It’s during the weekends when the priests are the busiest with all the pilgrims who come for the Masses and for confession.

Polish Priests Among the People

I admire Fr. Jan and Fr. Walerian for their perseverance in running the Marian mission here in Mindanao. It has not been easy for either one of them, and they went through many trials in their first year here. However, the Filipino people have a great love and respect for them and all that they do for the pilgrims. It is a Filipino custom of getting a blessing from a priest any time they meet them. They will take their right hand and bring it up to the priest’s forehead for a blessing. (Because I wear clerics, some of them have thought I was already a priest and would try to get my blessing as well.)

It is quite a sight to see Fr. Jan and Fr. Walerian among the Filipino people. Father Jan is shorter and is Filipino size. Father Walerian is quite tall (about 6 feet, 6 inches tall) and he is a giant among the Filipinos here. He is lovingly referred to as “Father Palm Tree.” It’s fun watching how the little children will just stare at him when they see him for the first time. They don’t know what to make of him.

Part of my trip to the Philippines this summer is also to discern whether God may be calling me to serve here after I am ordained a priest. And so I ask you to please keep this intention in your prayers, as well as ask for your prayers for Br. James and me during our stay here in the Philippines and for the mission. 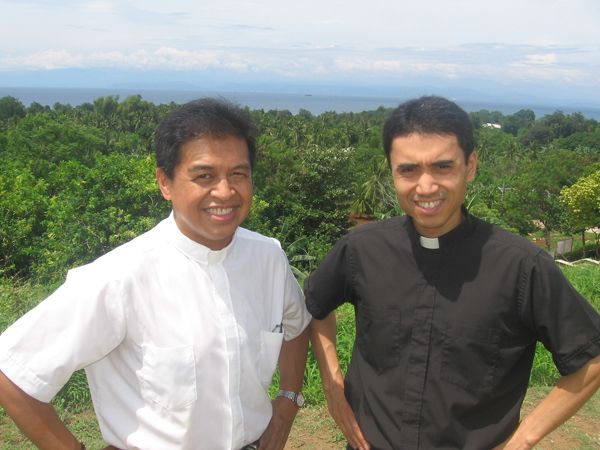 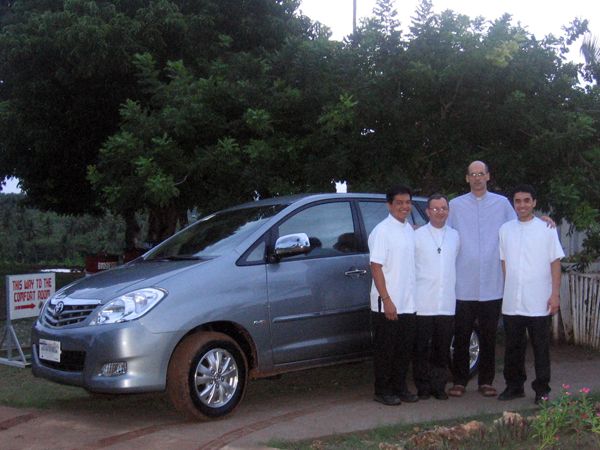 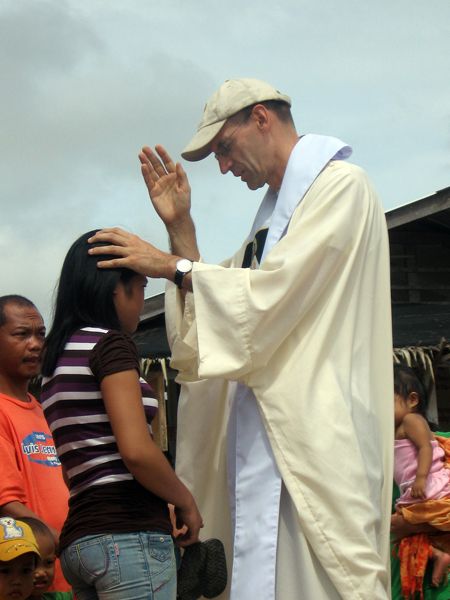 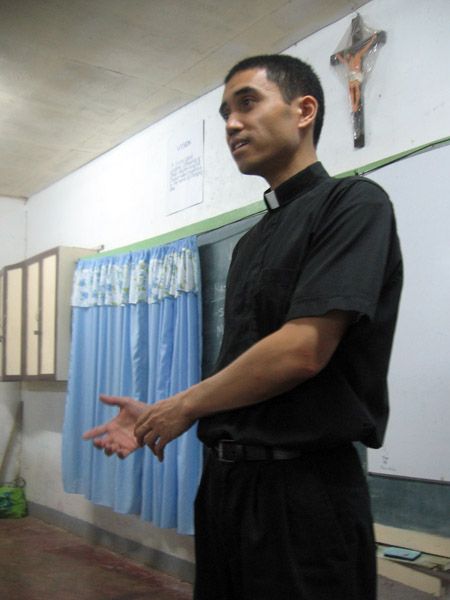 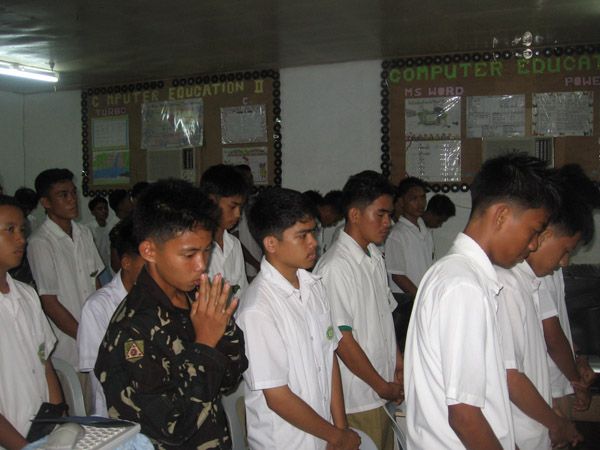 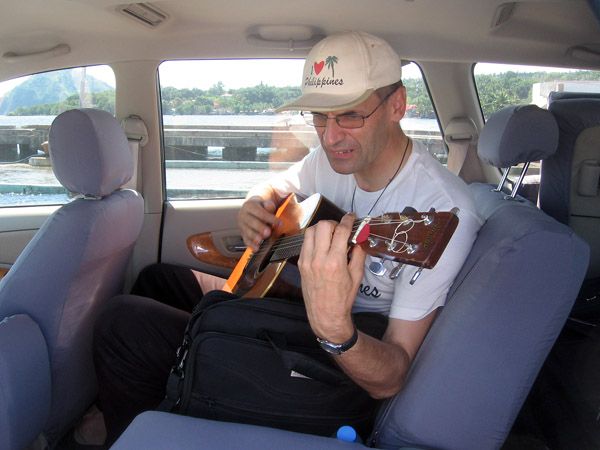 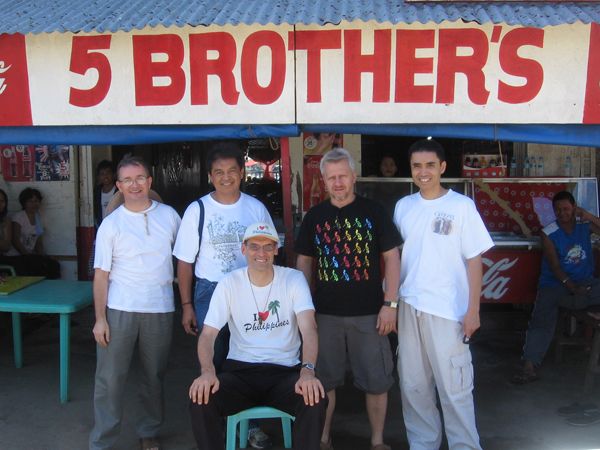 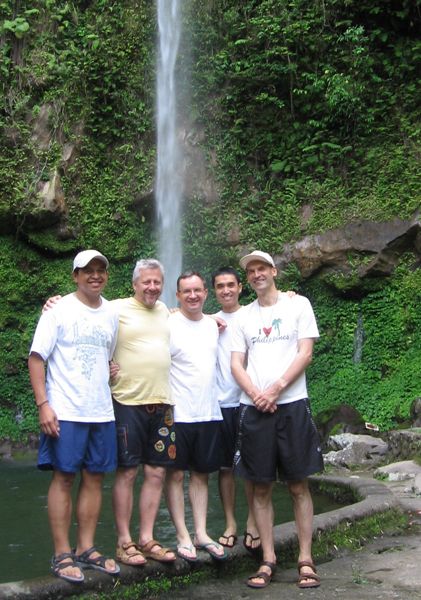 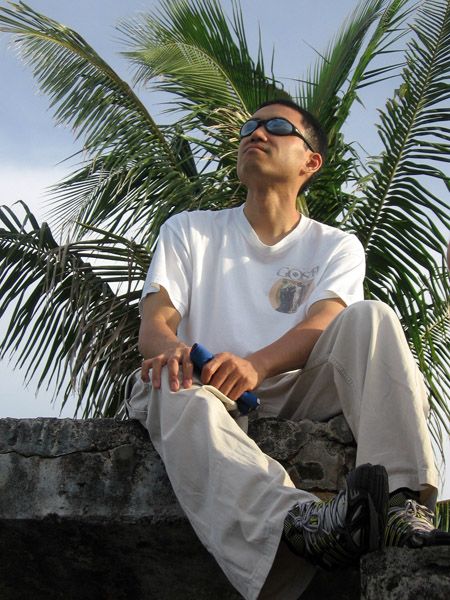 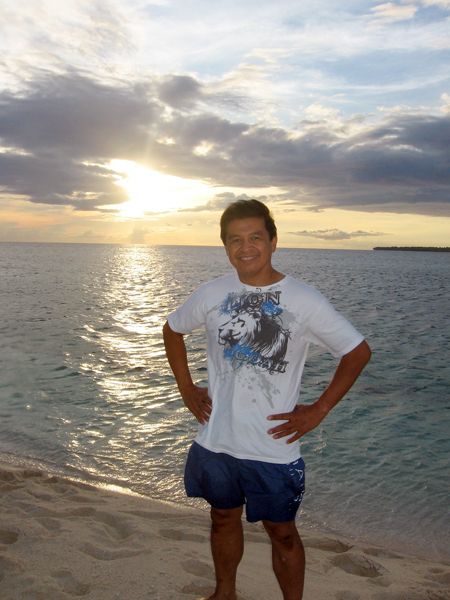 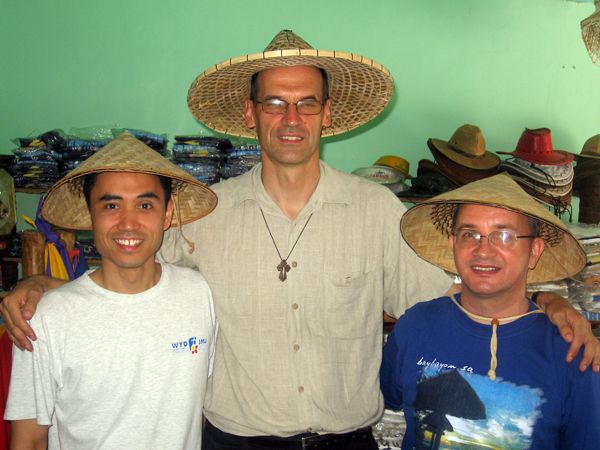 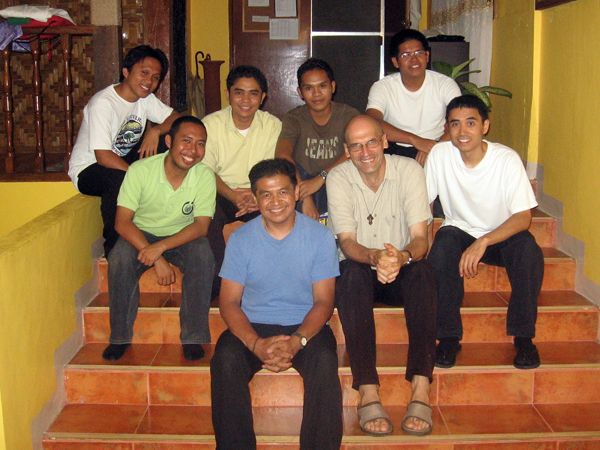 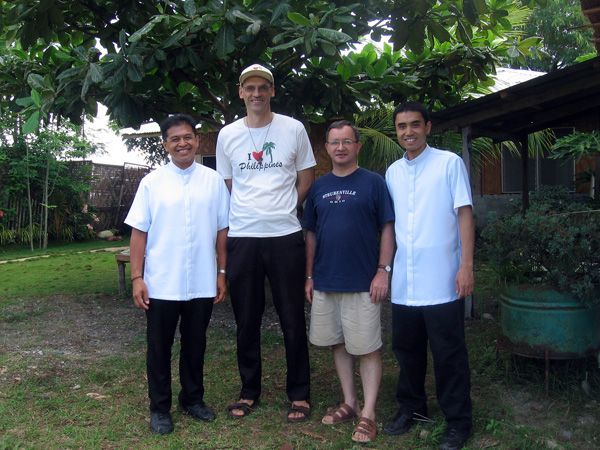 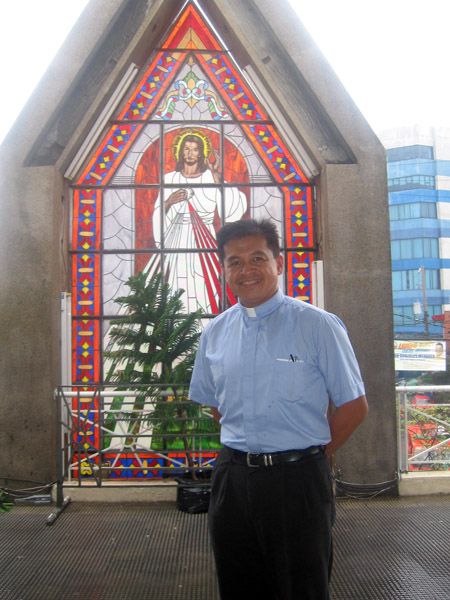 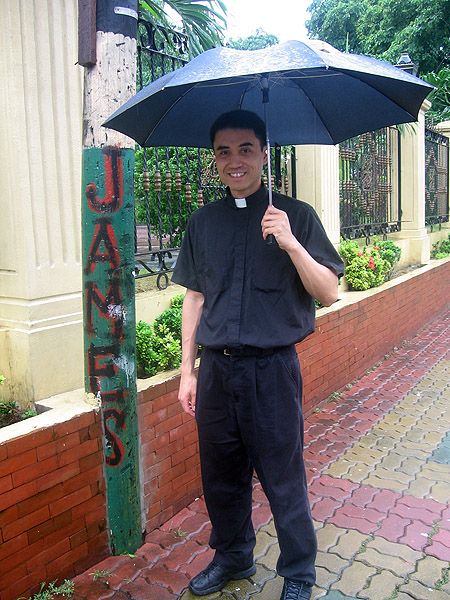 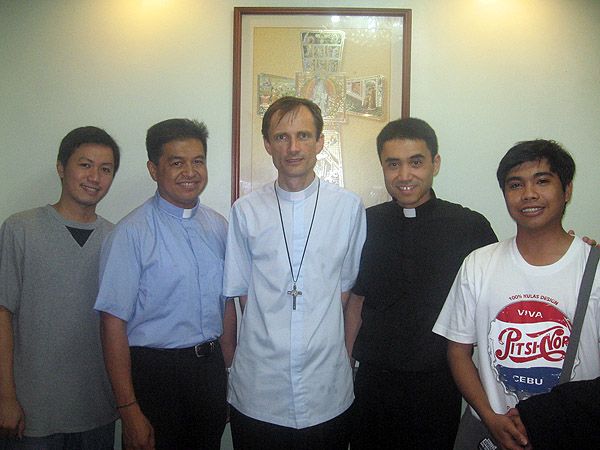 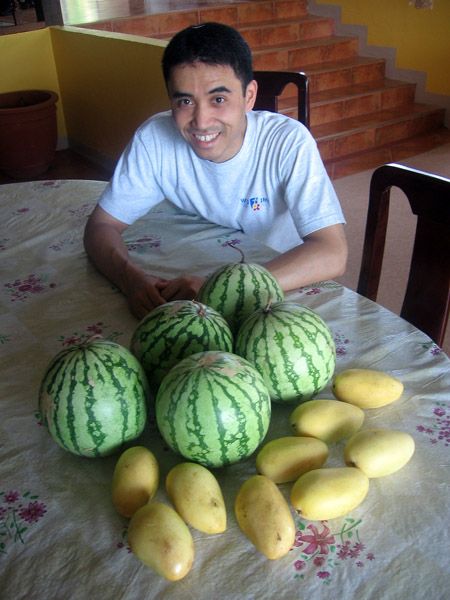 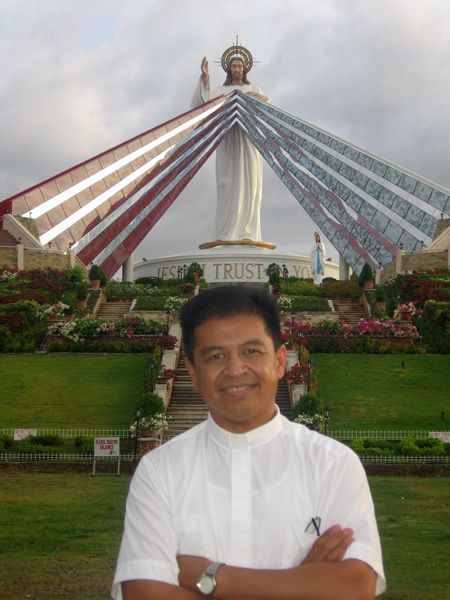 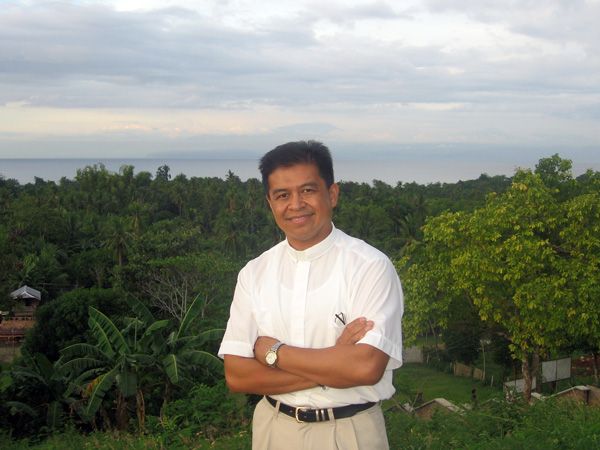 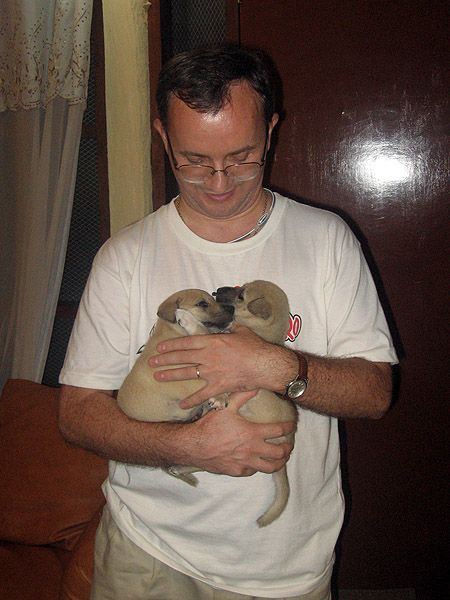 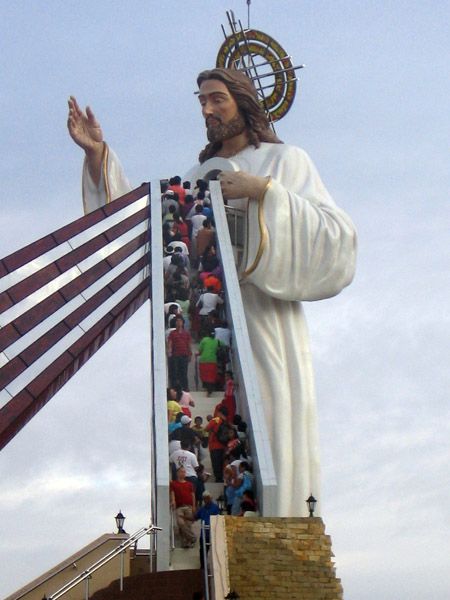 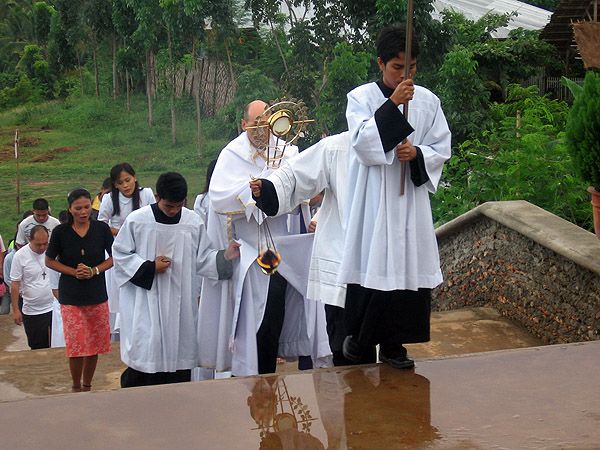 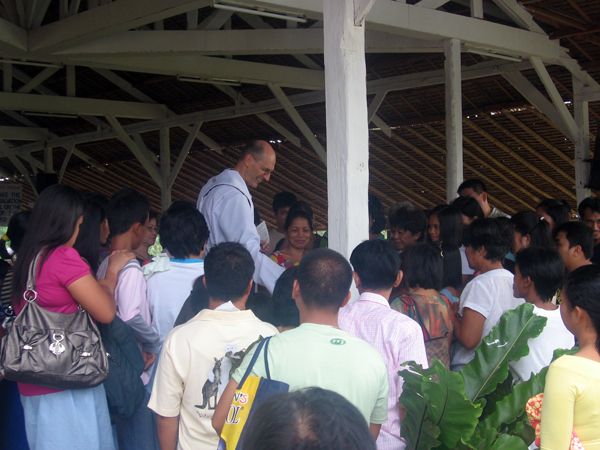 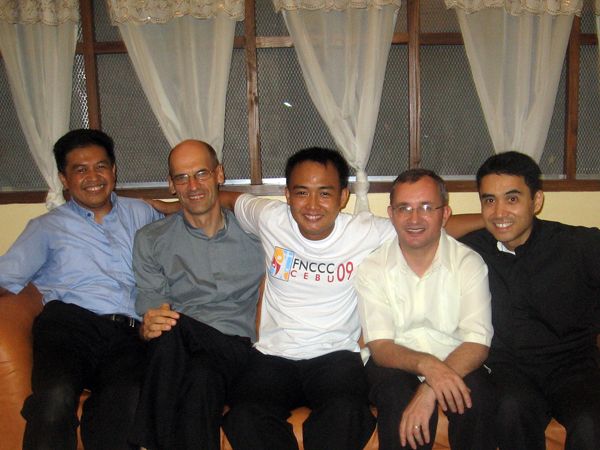 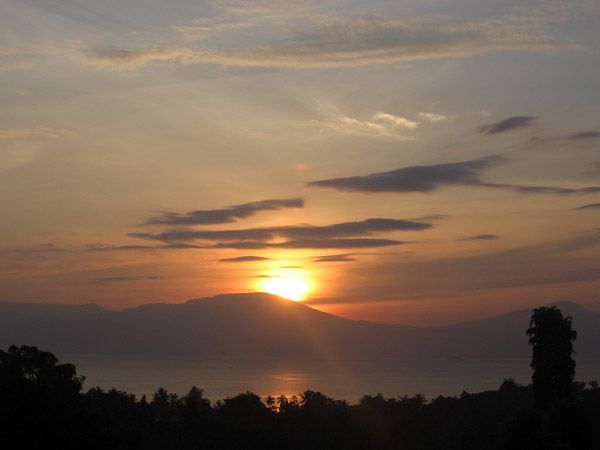 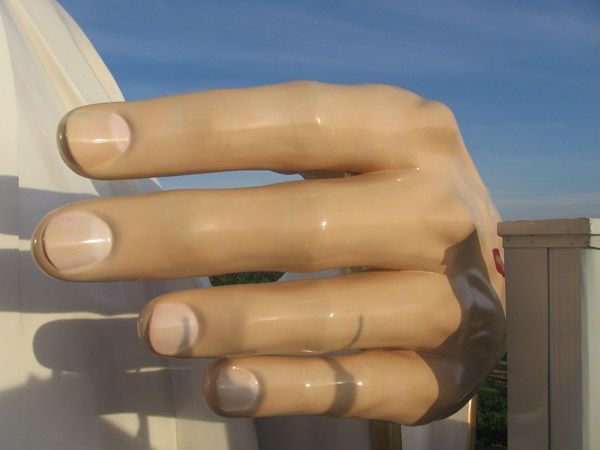 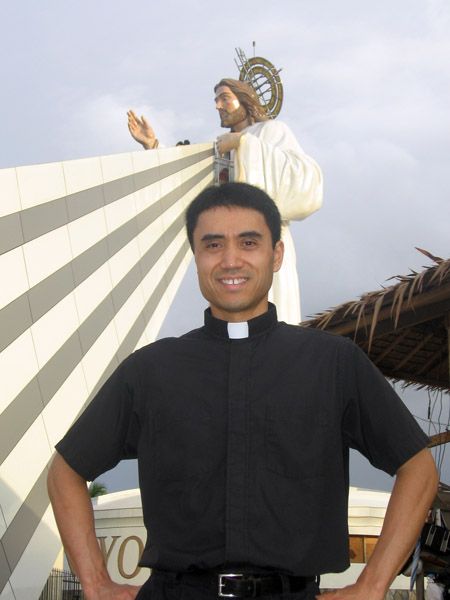 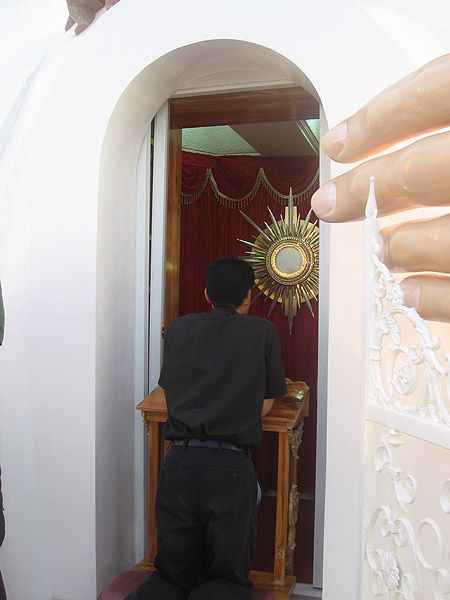 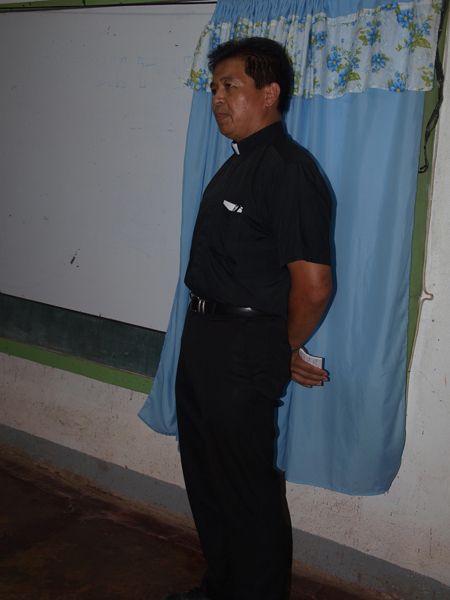