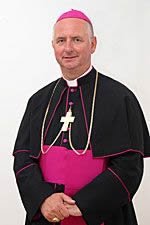 The new vir aggregatus
of the Congregation

On December 8, 2009, during the celebration of the Solemnity of the Immaculate Conception at the General House of the Congregation of Marian Fathers in Rome, Władysław Blin, Bishop of Vitebsk, was admitted to the Congregation as an Associate Member (vir aggregatus).

Coat of arms of
the Bishop of Vitebsk

In his speech, Bishop Blin stated that his priestly vocation was formed under the influence of the prominent Marians. The Shrine of Our Lady in Licheń has always been the site of his spiritual growth. From his early childhood, Władysław made pilgrimages to this shrine, coming from the nearby town of Ślezina (where his parents settled upon their arrival from Belarus).

For the past 10 years Bishop Władysław Blin served as the Ordinary of the Diocese of Vitebsk, which includes the town of Druja – the site of the first Marian monastery in Belarus, founded by our Father Renovator, Blessed Bishop George Matulewicz in 1923. Also within this diocese lies the Marian shrine in Rosica – the site of the Martyr death of the Blessed Marians Anthony Leszczewicz and George Kaszyra in 1943, who perished while rendering pastoral services to the faithful in the tragic times of war.

How eloquent are the words from the Book of Revelation...

Father Seraphim Michalenko, MIC, the world-renowned expert on the life and spirituality of St. Faustina — the man who smuggled photographic images of the pages of St. Faustina’s Diary out of Communist-occupied Poland in the 1970s and later documented her beatification and canonization miracles — died Thursday, Feb. 11, from illness related to COVID-19.