With humility before God, he has declared himself “not worthy.” But his friends, family, and fellow Marians would beg to differ.

Brother Angelo Casimiro, MIC, was ordained to the diaconate on Saturday, Jan. 8, and in doing so, has vowed to model himself on Christ, who came to serve and not be served.

Known as a great listener, a thoughtful friend, an eager pursuer of holiness, and a creative graphic artist, Deacon Angelo joins a growing congregation of Marian Fathers of the Immaculate Conception whose ranks include men of various talents and backgrounds but who share a common goal to serve Christ and His Church.

“This is a very powerful moment for me, something I’ve been preparing myself for a long time,” said Deacon Angelo, following his ordination at the Basilica of the National Shrine of the Immaculate Conception, in Washington, D.C.

He gives special thanks to Marian benefactors, his fellow Marians, family, and friends for their support throughout his vocational call.

A Filipino-American who may eventually be tapped to serve in the Marians’ mission in the Philippines, Deacon Angelo is scheduled to be ordained to the sacred priesthood in July. He was one of six men ordained to the diaconate in the Basilica’s Crypt Church. The other five men are from the Order of Friars Preachers.

‘To Carry On the Work of Christ’

“The Church needs young men like you to proclaim the Word of the Lord,” said the Most Rev. Martin D. Holley, Auxiliary Bishop of Washington, D.C., the principal celebrant and homilist for the Mass of Ordination.

In a homily that provided stirring spirituality and practical counsel, Bishop Holley advised the men to daily pray the Rosary, “which ponders the mystery of Christ’s life in union with Mary.” And to also pray the Angelus, “which allows us to remember daily the mystery of the Incarnate Word. … In the Angelus, we ask God to grant, through Mary’s intercession, that we may imitate her in doing His will and opening His word to our lives.”

He reminded the men that the Church is not motivated by earthly ambition, “but is interested in one thing only: to carry on the work of Christ, under the guidance of the Holy Spirit, for He came into the world to bear the witness of truth, to save and not to judge, to serve and not be serve. In other words, Jesus sets Himself as an example to be imitated.”

Flanked by his sister Cecilia and his fellow Marians, Deacon Angelo at turns sat, stood, kneeled, and lay prostrate, as is customary in a ceremony that solemnly and joyfully binds diaconate candidates to a life of self-sacrifice. Before the gathering in the Crypt Church, he declared his intentions to:

Raised to the diaconate, Deacon Angelo can now minister at the altar, proclaim the Gospel, give homilies, prepare the sacrifice of the Mass, distribute the Lord’s Body and Blood to the faithful, as well as administer baptism, assist at and bless marriages, bring viaticum to the dying, and conduct funeral rites.

A Perfect Fit in a Growing Community

The diaconate ordination marks the latest in a series for the Marian Congregation, which in recent years has attracted an unprecedented number of men. The Congregation has more than 20 men in formation in the United States, including eight novices.

“These are solid men, solid in their faith,” said Fr. Jim McCormack, MIC, the Marians’ assistant novice master and provincial prefect of formation. He said that without exception, the men have been drawn to the Marians because of the Congregation’s charism of spreading devotion to Mary Immaculate and the message of Divine Mercy as revealed through the Polish mystic St. Faustina. The Marians have promoted Divine Mercy since 1941.

Deacon Angelo, said Fr. Jim, “has a true servant’s heart. He is always giving of himself.”

“One of the things I hear so often about Marian priests is that they are great confessors,” said Br. Leonard Konopka, MIC, who lives at the Marian House of Studies in Washington, D.C. “I suspect Deacon Angelo will fit that mold. He is compassionate, and he’s a great listener.”

“He’s always been thoughtful of others,” said his sister, Cecelia Casimiro-Groves. “This is a big day for him and our family.”

It Comes Down to Two Words

Deacon Angelo says his vocational call can be defined by two words: mercy and Mary. In the year 2000, at the age of 36, Deacon Angelo experienced a “re-version” to his Catholic faith. He was living in southern California and working as a graphic designer, “but something was missing,” he said.

His best friend had recently experienced a profound spiritual conversion through the message of The Divine Mercy. “He got together with me and couldn’t stop talking about it,” Deacon Angelo said. “However, it just turned me off, and I couldn’t believe all the claims about God’s mercy that he was making. It sounded too good to be true.

“My friend continued to talk to me about the Catholic faith and would give me books to read on The Divine Mercy, St. Faustina, Marian apparitions, and related topics,” Deacon Angelo recalled. “I still couldn’t make sense of it all until one day he persuaded me to attend a Marian conference in Irvine, Calif. That conference totally changed my life. Probably because of my friend’s prayers for me to Jesus through the intercession of the Blessed Virgin Mary, my heart was slowly opening up to let the Lord come inside.

Then, during Eucharistic Adoration, he said he “came face to face with Jesus in the Blessed Sacrament. I saw people falling on their knees and crying. It touched me deeply, so I asked the Lord to help me see what they saw. I went through the rest of the conference and remember waking up the day after feeling like I had been spiritually transformed. All I wanted to do was to go to Mass, pray the Rosary and Divine Mercy Chaplet, and learn more about my Catholic faith. Our Lord and Our Lady had caught my heart, and there was no turning back.”

He was accepted as a Marian postulant in 2005.

Perfect in His Imperfection

Bishop Holley’s homily seemed tailor-made for Deacon Angelo, who, in his humility, has often remarked how he doesn’t “feel worthy” of Christ’s call.

Paraphrasing Pope Benedict XVI, Bishop Holley said that in order to respond to the call of God “it’s not necessary to be perfect. Human weaknesses do not represent an obstacle, as long as they remind us that we are in need of the redeeming grace of Christ.”

Following the Mass of Ordination, Deacon Angelo said he was certain that “God will use my weakness to do whatever He asks of me.”

During the laying on of hands, Bishop Holley recited the words: “Receive the Gospel of Christ whose herald you have become. Believe what you read, teach what you believe, and practice what you teach.”

“I was feeling a lot of nervousness before the Mass,” recalled Deacon Angelo. “But as soon as Bishop Holley lay his hands on my head I suddenly felt a sense of peace. I feel great joy.” 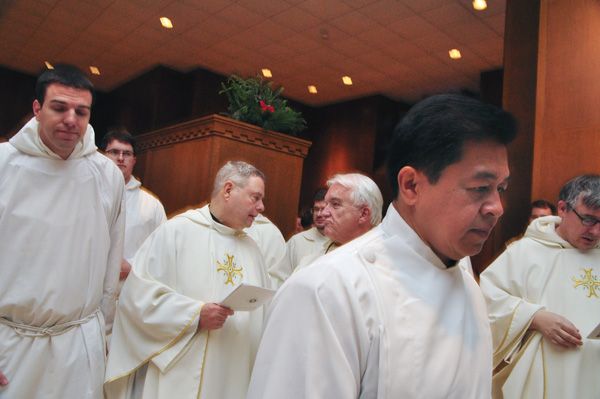 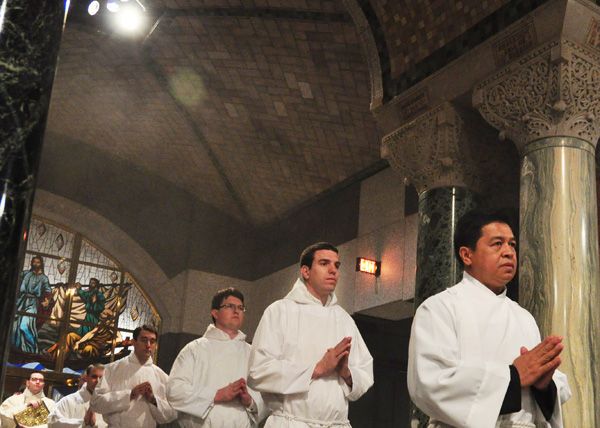 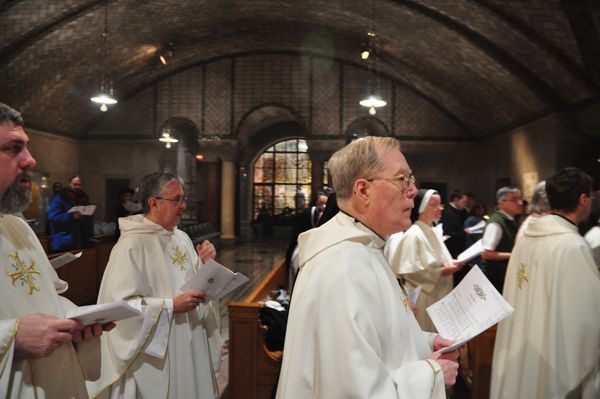 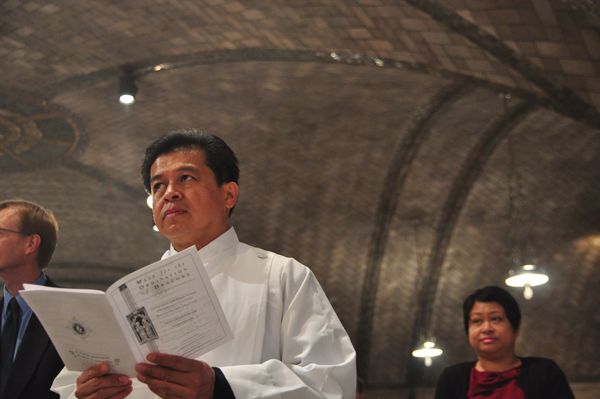 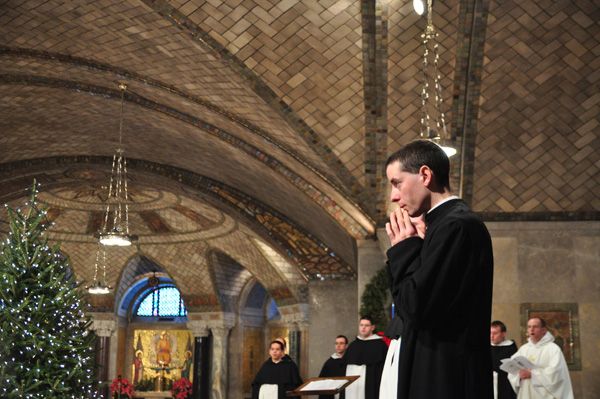 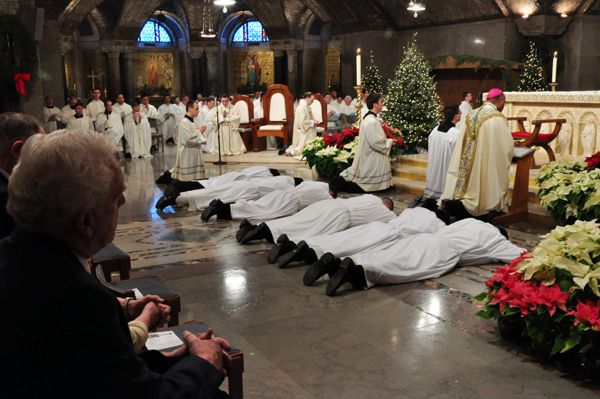 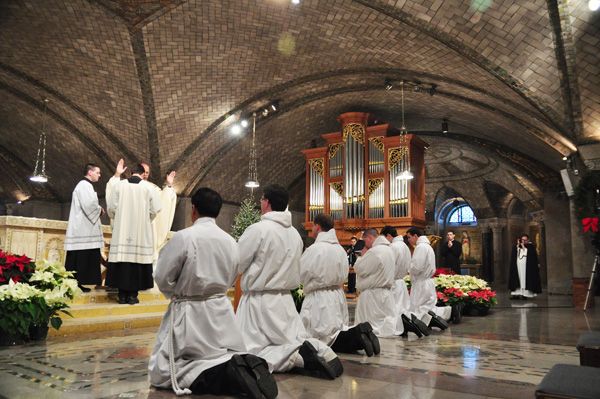 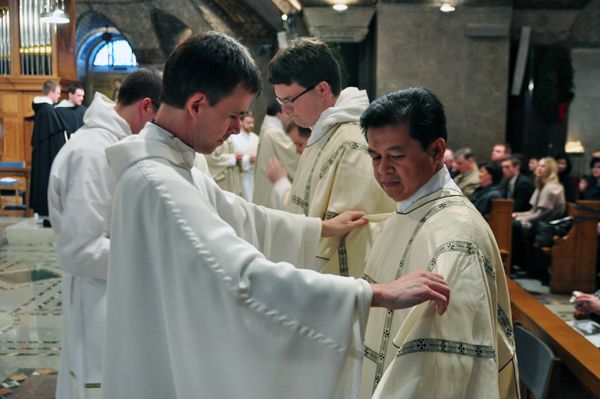 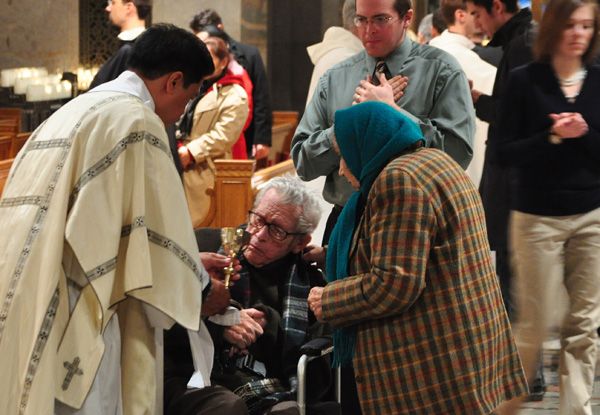 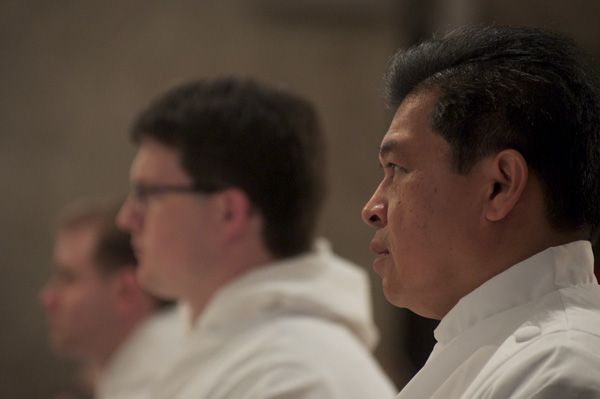 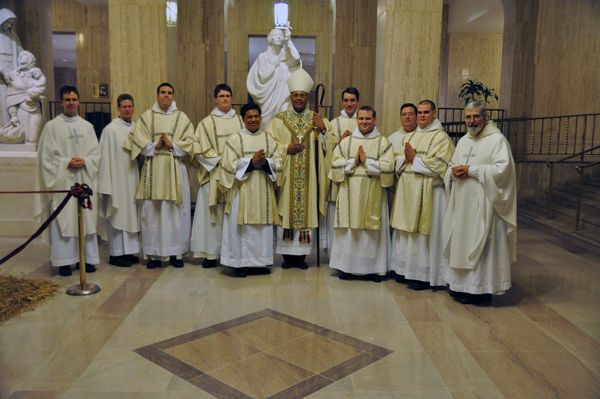 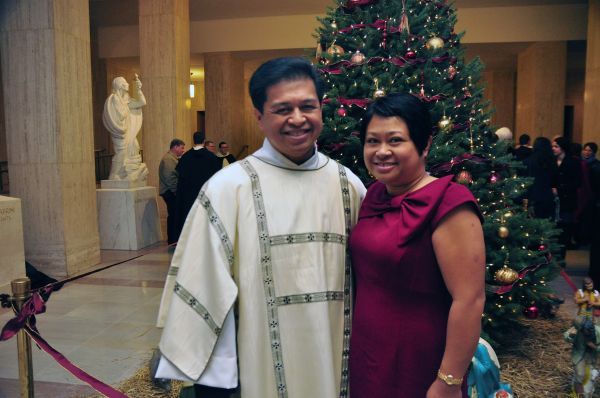 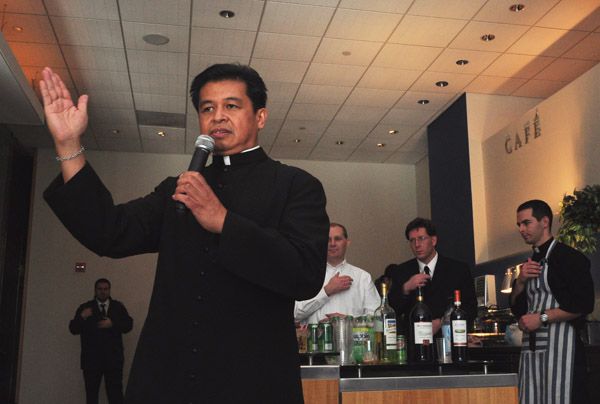 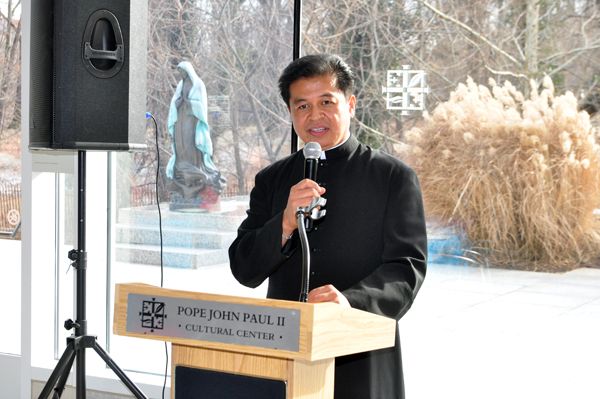 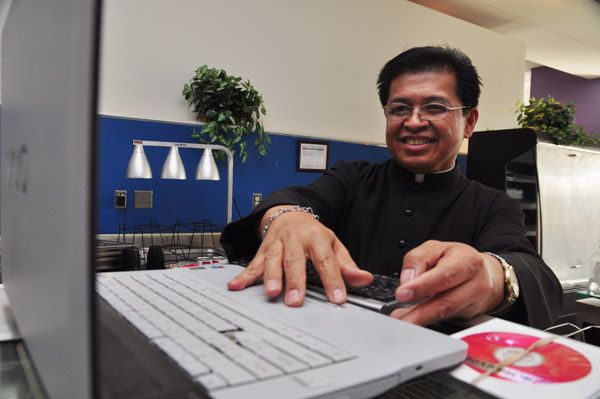 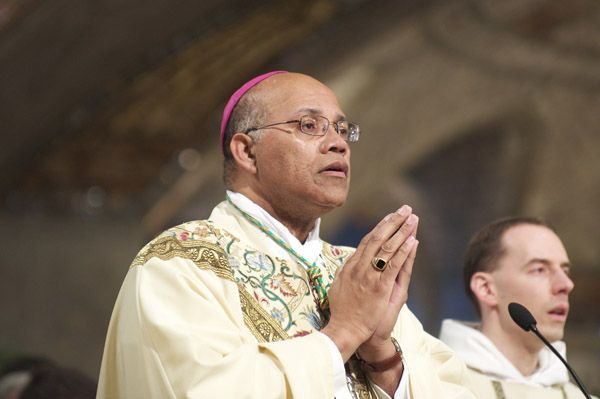 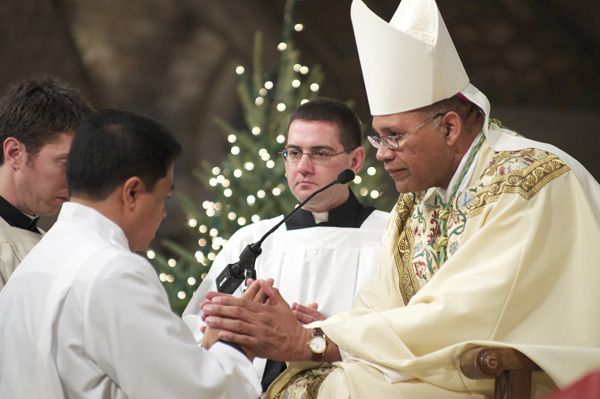 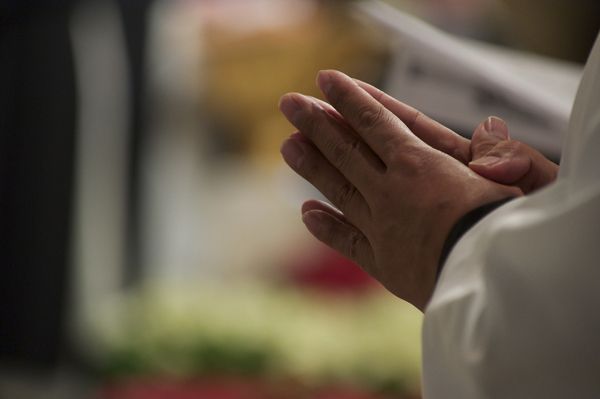 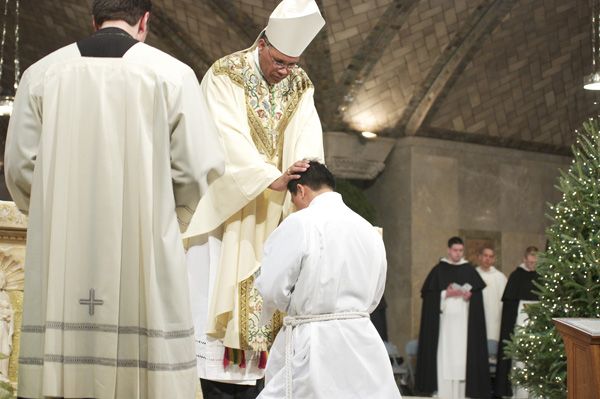 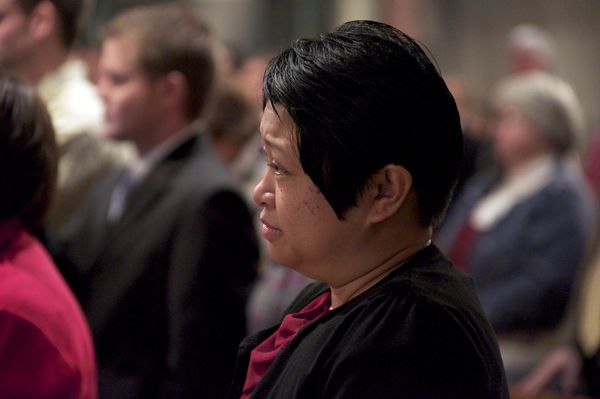 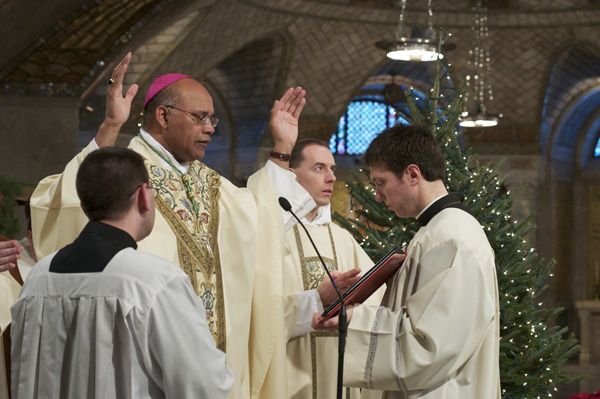 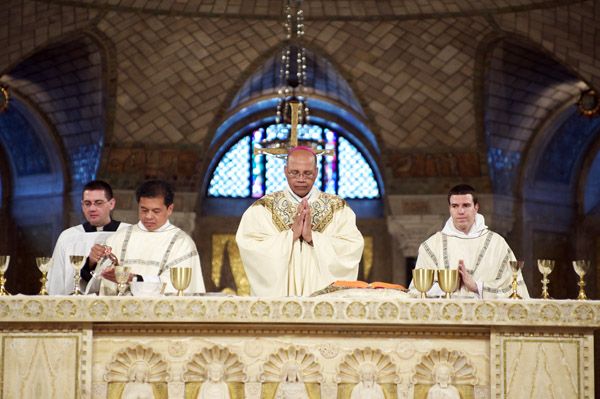 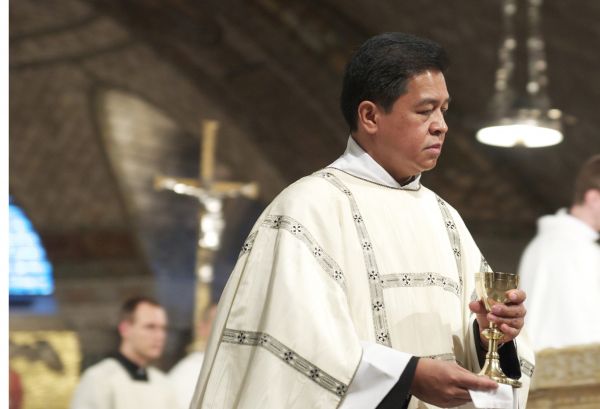 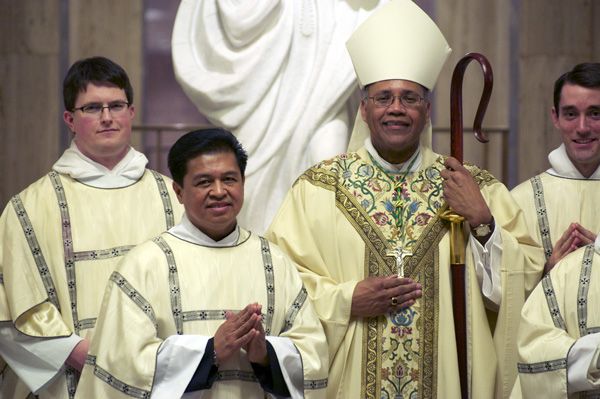