Deacon James Cervantes, MIC, processed into the church to the choir singing a song with the refrain “… Lord I give you my heart, I give you my soul, I live for You alone …”

On a clear, sunny May 28th, surrounded by many of his Marian brothers from across the United States, Deacon James was raised to the sacred order of the priesthood as a Marian Father of the Immaculate Conception, consecrating his entire heart, soul and life to the Lord. During the Liturgy, the auxiliary bishop of the Archdiocese of Los Angeles, the Most Rev. Oscar Solis, laid his hands on Deacon James’s head, invoking the Holy Spirit. Bishop Solis then took holy oil and anointed Fr. James’s hands, the hands that will bless and hold the Lord in the consecration.

“This is a great blessing to our family and to our community,” said Fr. James’ father, Oscar, as he reflected on all the people who came to celebrate his son’s priestly ordination at his hometown parish, St. Elizabeth Ann Seton, in Rowland Heights, Calif.

Mr. Cervantes added, “Before James was born, I asked Jesus to give me a son, and that if He granted my prayer I would offer Him back to Jesus. While my wife was still pregnant with James, I also prayed to the Blessed Mother, begging that if I had a son, my son would become a priest.”

This theme of being called by God to serve Him as a priest was woven throughout the Liturgy. The first reading of the Mass for ordination was from Jeremiah (1:4-9), which begins, “Before I formed you in the womb I knew you, before you were born I dedicated you …”

Bishop Solis echoed the divine nature of the call to the priesthood in his homily. “You do not call yourself. You do not elevate yourself. This is not a coronation. … You are answering the call to follow Christ, to act in persona Christi, in the person of Christ. … But do not be afraid.”

Through the different experiences Fr. James has had in his life, the way the Lord called him to the Marian Fathers, his years in formation and studies, his missionary work in the Philippines, the Lord has prepared him to better hear and answer the call to the priesthood.

Bishop Solis reminded Fr. James — in the midst of his labors for the people of God — to remember he is not alone. “Stay close to your brother priests who can support you.”

In addition to the support of his fellow Marians, another critical component to Fr. James’ formation — and the mission of the Marians in general — is the prayerful and financial support given by Marian Helpers. Their encouragement has helped Fr. James to persevere in his vocation and his work.

In a particularly touching moment, Fr. James presented his mother with the towel used to wipe the oil from his hands after the bishop anointed him. Traditionally, that towel is placed in the hands of the priest’s mother upon her burial, signifying that she is the mother of a priest. Choking back tears, Oscar Cervantes said, “[Getting the towel] really touched us.”

When asked what Fr. James’s vocation as a Marian priest meant to the family, Fr. James’s mother, Yolanda, said it was meant to be. “God called him to be a missionary of Divine Mercy.”

In light of the missionary work that the Marian Fathers are doing in the Philippines and the way that the Divine Mercy message and devotion has taken root there, Fr. James’s parents see the great contribution he can make when he returns there as a priest.

Now that Fr. James is indeed a priest and his parents’ long awaited prayers are answered, they have a new prayer for their son. Said Oscar Cervantes smiling, “We pray that James will be a holy priest.”

After being ordained, Fr. James imparted his first priestly blessing upon Bishop Solis. Then, he blessed his parents. Later, he reminisced how his father always blessed him and his brother before they went to school in the morning and before they went to bed at night. “Now, I get to bless my father, as a Father.” He said.

Long after the Mass ended, people stood in line, awaiting the first blessing of this newly ordained Fr. James, this new priest who answered an old call to serve the Lord.

The following day, May 29, Fr. James celebrated his first Mass, also known as the Mass of Thanksgiving.

In his homily, the Very Rev. Fr. Dan Cambra, MIC, provincial superior of the Marians, talked about the two most influential elements to Fr. James’ upbringing: his family and his parish.

“Fr. James’ task was in his heart from his earliest days. … He had what every priest needs: love. His family experience was rooted in Christ — that we are loved by Christ.” The love and pride of Fr. James’ parents was so evident in their joyful, tearful faces.

Father Dan also thanked Fr. James’ parish family who supported and encouraged Fr. James in his vocation by helping him grow in his faith.

Then Fr. Dan mentioned Fr. James’ other family, his Marian family, who, in a sense, received the vocation of Fr. James.

“Father James, God loves you. In love you were created. He gave you your family, your parish family, and your Marian family. May you grow in the love that the He has begun in you.”

Father Dan also encouraged Fr. James to be a witness to the people of God. “Be who you are — a priest of peace. And remember that every day people are observing you. You are a walking billboard. By your example you will call others to the priesthood, to sanctity, to marriage, to sacrifice. … And may God bless you today, and bless us through you.” 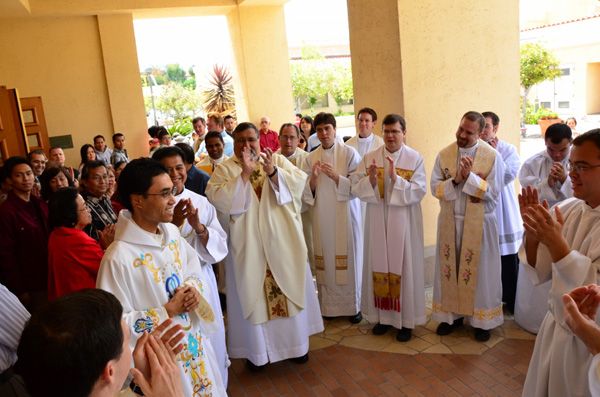 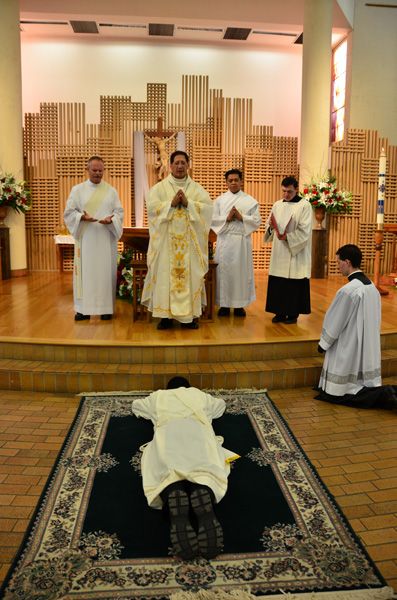 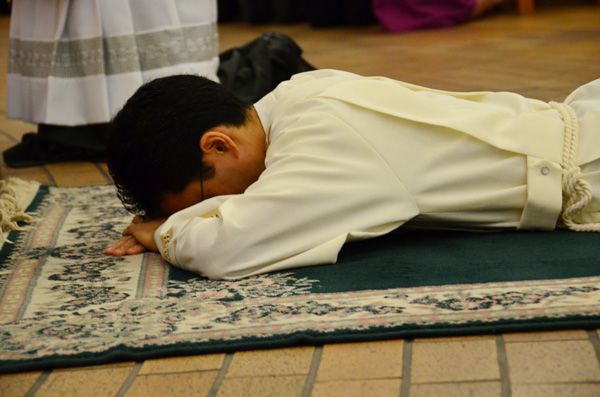 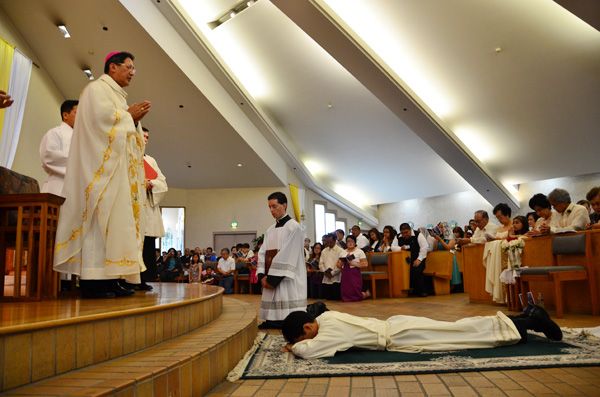 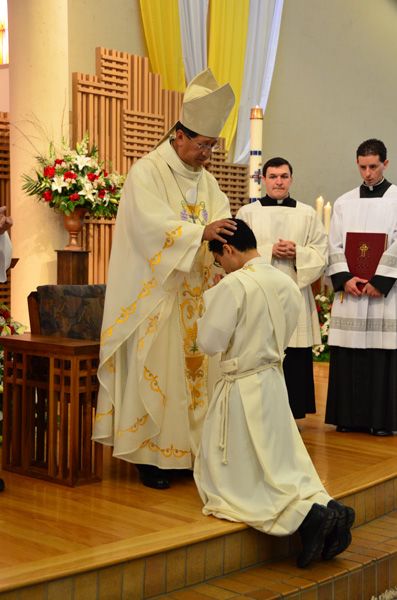 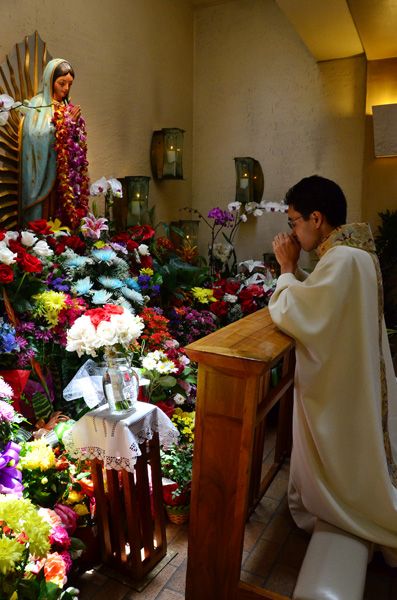 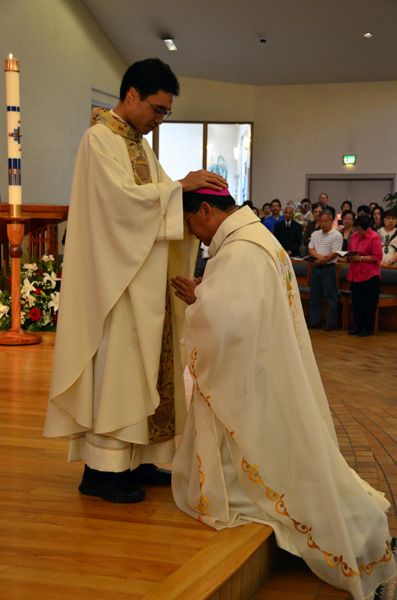 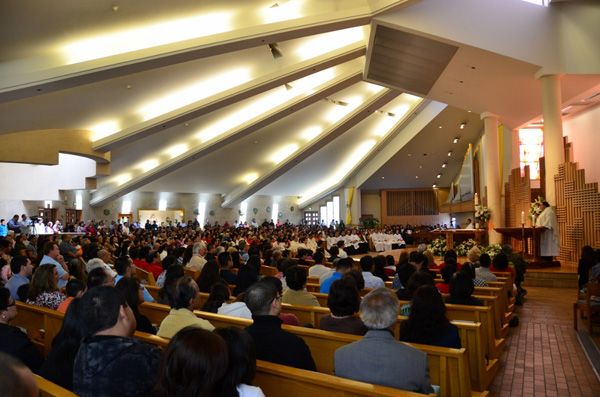 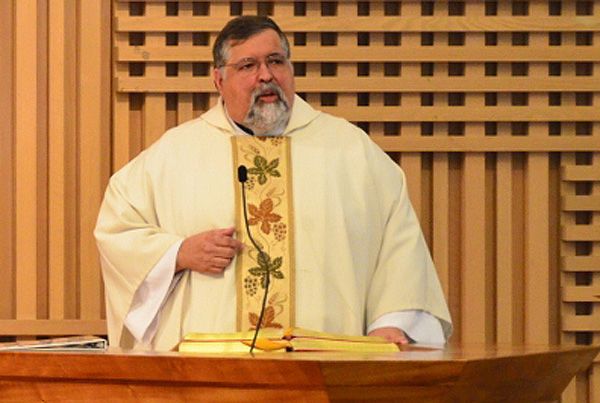 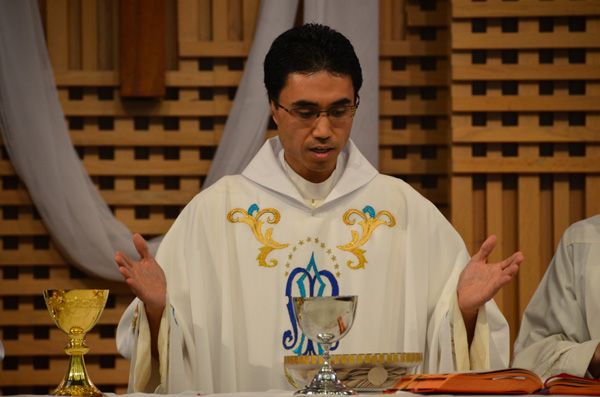 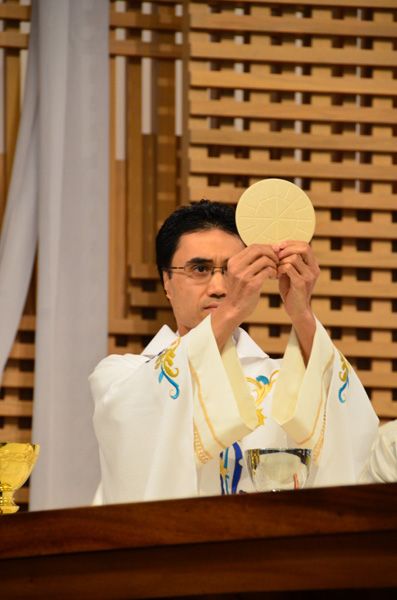 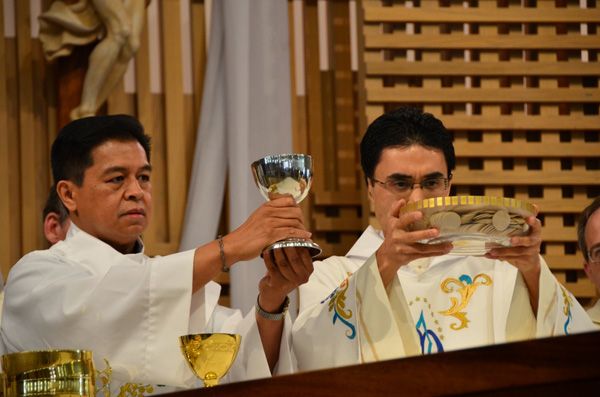 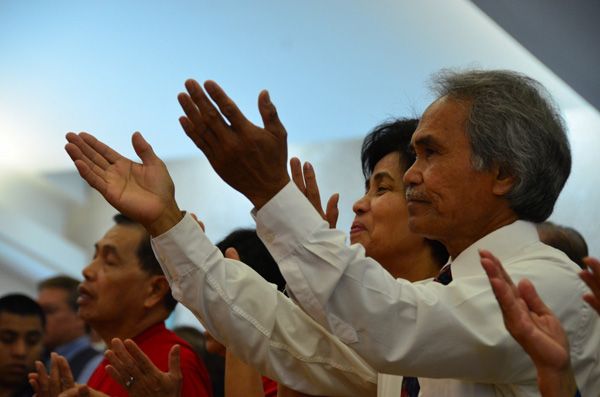 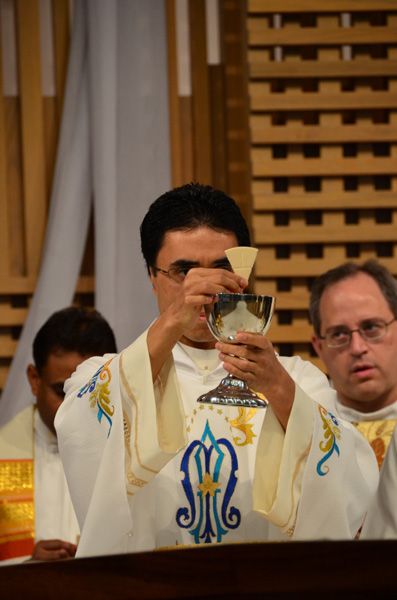 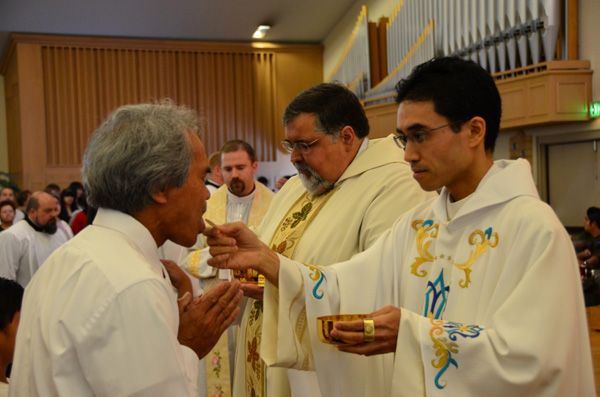 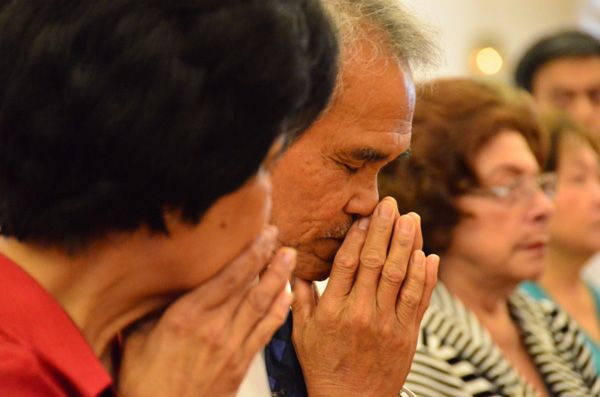 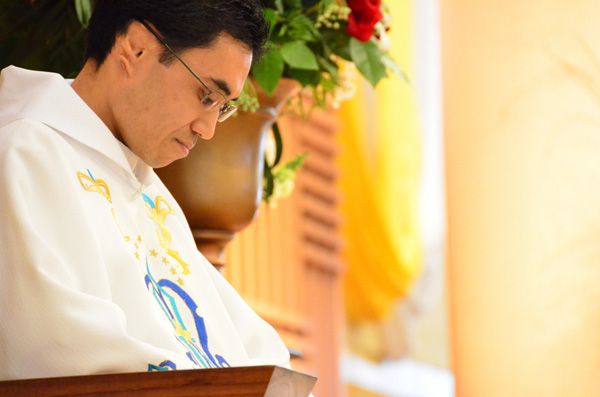 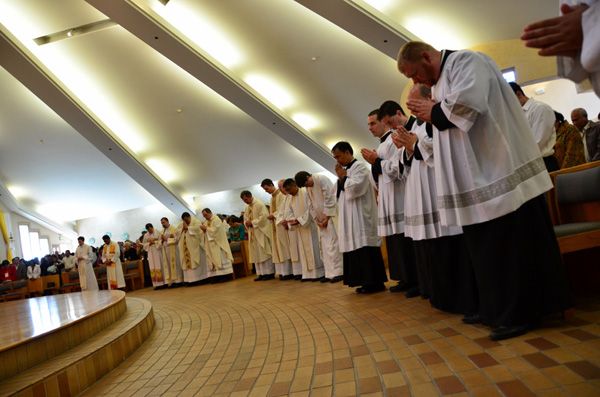 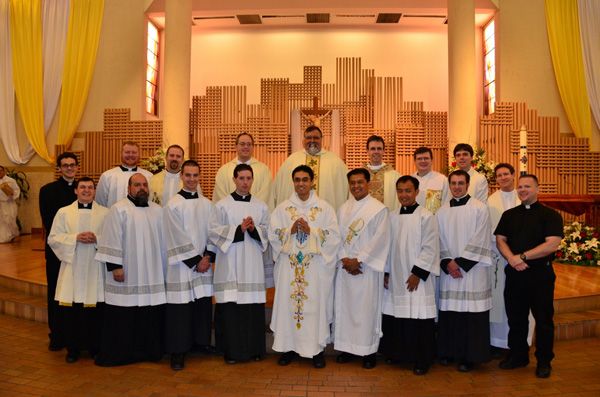 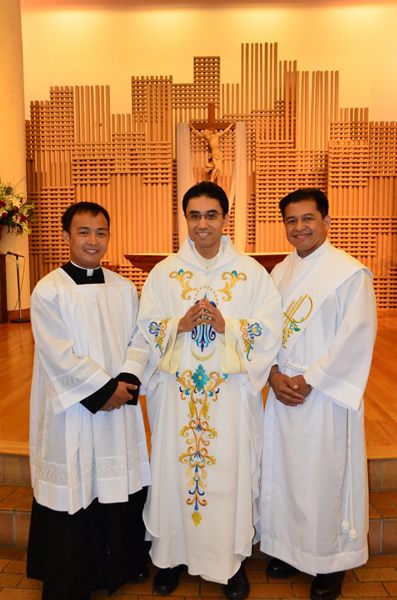 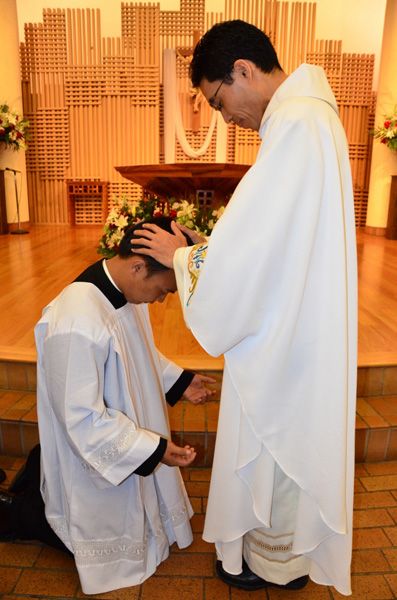 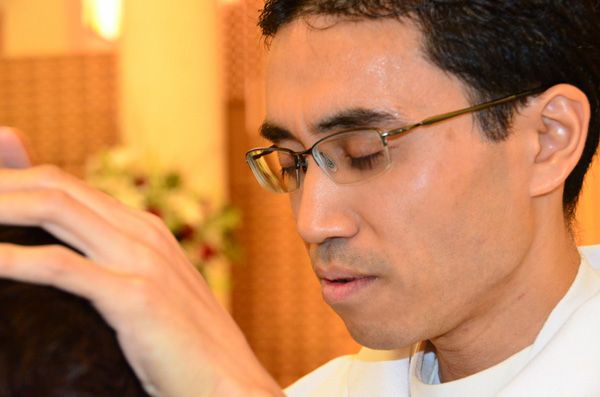