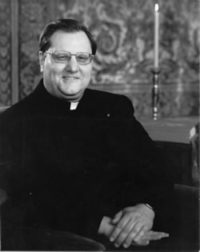 Rev. Donald S. Petraitis MIC, former Superior General of the Marian Fathers of the Immaculate Conception and the last Provincial Superior of the Saint Casimir Province passed away peacefully on June 12, 2012 at the University of Massachusetts Memorial Hospital in Worcester, Massachusetts.

Born in Chicago in 1937, Fr. Donald grew up under the pastoral guidance of the Marian Fathers of the Immaculate Conception and Sisters of St. Casimir who served at Our Lady of Vilna Parish. It was the Marian Fathers, the community that Blessed George Matulaitis preserved from extinction and renovated, that Fr. Donald chose to enter and professed his religious vows on July 16, 1956. Completing his college studies at St. Procopius College (now Benedictine University), he continued his priestly formation at the Marian Hills Seminary in Clarendon Hills, IL. Fr. Donald was ordained a priest on May 9, 1964, and after ordination he was assigned to a teaching post at Marianapolis Preparatory School in Thompson, CT, where in 1970 he became its Director. In July 1975 the General Chapter elected Fr. Petraitis the Vicar General, and he moved to Rome. He not only completed nine years of service as Vicar but since 1984 he served the Congregation as its Superior General. In 1993 he returned to Chicago and within months he was elected to the office of Provincial Superior, serving in this capacity until 2006 when two American Provinces merged and formed the Blessed Virgin Mary, Mother of Mercy Province. Fr. Petraitis spent his last three years in retirement at the Marian Residence in Thompson, CT.

Fr. Donald played a significant role during his leadership as Superior General of the Congregation. It was his responsibility to guide the Congregation during a period of profound changes in Eastern Europe and in the Soviet Union, where many of the Congregation’s members lived and worked. Fr. Donald was able to witness the life and ministry of his confreres working under highly oppressive conditions of the Soviet regime before 1989. He stayed in contact with Marians from Lithuania, Latvia and Ukraine who joined our Congregation in secret. He cared for their material and spiritual needs, thereby encouraging and strengthening them. His was also the responsibility to guide the community in the aftermath of the 1989 dissolution of the Soviet Union and restoration of the Baltic countries, Ukraine, Belarus and Kazakhstan. At the heart of his pastoral care was the spiritual and apostolic development of Marian communities in those changing times.

It was his privilege and responsibility also to prepare the solemn beatification ceremony of Blessed George Matulaitis, the first Marian to be raised to the honors of the altar during a special year for the Lithuanian people as they celebrated the 600th Anniversary of Christianity in their country. Finally, Fr. Petraitis prepared and presided over the historical 1993 General Chapter of the Marian Fathers which gathered the representatives of the entire Marian Congregation for the first time since 1939.

He will be remembered as a priest who always manifested a deep faith in God’s goodness and Providence, as well as, a man of courage, who never tired to encourage the members of his community when facing difficulties with his famous Italian expression corragio e avanti – “have courage and go forward.”

On Friday early evening a wake service of prayers and remembrances took place at the Marian Fathers’ Provincial Headquarter at the National Shrine of The Divine Mercy in Stockbridge, MA. On Saturday, June 16, a funeral Mass is to be offered by the Marian Community with the Very Rev. Joseph G. Roesch, MIC, Vicar General from Rome, as the principal celebrant and Very Rev. Kazimierz Chwalek, MIC, Provincial Superior as homilist.