Thirty eight houses, built in the Philippines for the victims of Typhoon Washi that struck on the night of December 17-18, 2011, were made available at the beginning of 2013. The project called “Mother of Mercy Village” was generously supported by the donors from Poland who provided funding through mediation of the Marian Fathers.

These needy families received a roof over their heads in the second week of January 2013. Despite the torrential rain that fell on the night of January 10-11, 2013, 38 families with all their salvaged possessions were able to move into their new homes. Three days later, when Holy Mass was celebrated, the weather was beautiful again. 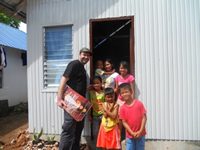 Representatives of the religious congregations – originators and sponsors of the project – participated in the Eucharist that was presided over by Bishop Boy Salvador. The Congregation of Marian Fathers and its donors from Poland were represented by Frs. Walerian Poźniak, the Rector of The Divine Mercy Shrine, and Dariusz Drzewiecki, the religious house superior. After the solemn service and blessing of the newly constructed houses, all the assembled attended a communal meal. 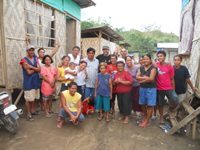 Thus far, 50 houses have been built as part of the project “Mother of Mercy Village.” The fundraising continues on behalf of the typhoon victims. There are 500 families still in need of a roof over their heads. The price of building one small house is 9,500 Polish zlotys (about US$3,200). We count of our donors’ generosity, for which we give our heartfelt thanks. One bag of cement costs in the Philippines the equivalent of 20 Polish zlotys (about US$7). Fifty one bags are needed to raise one little house.