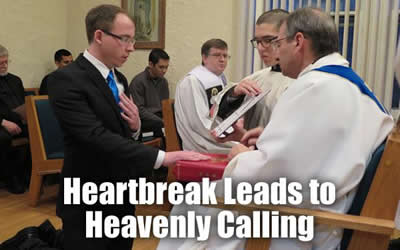 On a ledge in the back of the Marian Fathers’ chapel in Steubenville, Ohio, rested a laptop with a webcam pointing at just the right angle. A Skype connection enabled 15 of Justin Laporte’s family and friends over 600 miles away to watch him become a brother with the Marian Fathers last Friday evening.

Professing the one-year vows of poverty, chastity, and obedience, Justin Laporte became “Br. Justin, MIC.” Provincial Superior the Very Rev. Fr. Kazimierz Chwalek, MIC, accepted and confirmed the vows on behalf of the Marian Fathers and the Church and then presented Br. Justin with the Blue Scapular of Our Lady, which serves as a sign of honoring and imitating Mary.

Brother Justin for the first time also donned ecclesiastic garments, symbolizing the putting away of the old life and the taking up of the new.

Through Skype, his family and friends witnessed it all.

“My parents really don’t like driving in the winter,” he said. “So my mom gathered [almost] my entire family … in her basement, and they all prayed the Rosary before the vows. Thankfully the connectivity [was] good and they got to see the entire celebration.”

Justin and his family are from Sudbury, Ontario, a city north of Lake Huron. “I probably had one of the happiest childhoods a guy could ask for,” he said.

Though he was raised Catholic, Justin did not take his faith seriously until heartbreak led him to prayer. When Justin was about 18 years old, he dated a young woman named Samantha. They both believed they had found their soulmate. Not very religious at the time, Justin was impressed by her piety. “She was a Protestant, but she was really filled with the love of the Lord and the Holy Spirit. I had never seen someone so faithful,” he said.

“We dated for four months. We never had a single fight,” he said. “We kept saying how much we loved each other and wanted to marry each other.”

After she spent a weekend at a Christian retreat, Justin’s girlfriend told him in tears that God revealed to her they should no longer date. Shocked, Justin struggled to accept this news.

Seeing her son heartbroken, Justin’s mother encouraged him to turn to God. He said, “My mom was always practicing. She always kept her faith in her heart. She always went to Adoration … She said, ‘You need to start asking [God] some questions.'”

Once every week, Justin started going to Adoration at his church in Sudbury. He said, “The more I would go, the more the Lord kept calling me to a deeper prayer life. He just kept asking me to let [Samantha] go.” It took Justin about a year and a half to find complete healing from his heartbreak. When he did, he felt grateful for everything that had happened. He said, “I finally felt free and liberated.”

“[Then I asked God], ‘What is it you truly want me to do?’ That was when I heard the word, ‘priest,'” he said. At first, Justin felt frustrated by the thought that God was calling him to the priesthood. “I was really upset about it,” he said. “But the more I kept going to Adoration … the more I accepted it. Through this experience, the Lord showed me … a much greater love. Even though I thought I [had] found the greatest love a human being could find through a woman, I found an even greater love through Christ and the religious vocation.”

At a weekly prayer group, Justin discovered a DVD of the conversion story of Fr. Donald Calloway, MIC. He said, “It was a pretty amazing conversion story. I thought, ‘If this guy could become a priest, anybody can.'”

First, Justin discerned for a week with the Companions of the Cross in Ottawa. Then he considered an order of Capuchins in Toronto. Then he spent six months with the Society of Missionaries of Africa in Montreal.

Finally, his mom encouraged him to look into the Marian Fathers. Justin signed up for a “come and see” retreat with Fr. Calloway in Steubenville, Ohio. “When I came to the “come and see,” everything that was in my heart that I really wanted from the priesthood Fr. Calloway was saying … Boom, boom, boom one after another,” he said. “After that weekend, I was filled with so much peace and joy I thought, ‘This is it. I found it.'”

“I’ve been wearing the novitiate shirt for at least two years. I’ve had four novice classes, three novice masters,” he said. “Being out of the novitiate is a plus … it’s a surreal feeling to finally be a brother.”

The day Br. Justin professed his first vows, Feb. 2, just so happened to be the World Day for Consecrated Life.

After the ceremony, Br. Justin said, “Ever since I started discerning religious life, I’ve always dreamt of wearing the collar. Now when I look in the mirror, sometimes it’s hard to believe that it’s actually happening.”

“I just want to thank our Lord and Our Lady for getting me here,” he said. “There is no way in heck I would be here without them.”