The Association of Marian Helpers Celebrates Its 75th Anniversary

The Association of Marian Helpers Celebrates Its 75th Anniversary 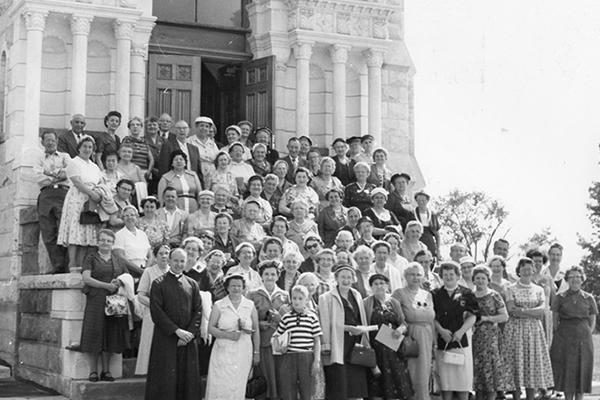 Learn about the Catholic faith, live it wholeheartedly, and be ambassadors of that message always and everywhere.

That has long been the mission for the Marian Fathers and their lay associates who, together, comprise the Association of Marian Helpers, which marks its 75th anniversary this year.

This powerful team of nearly 1.5 million members grew from just a small group of friends — friends from different backgrounds, ethnicities, and interests. But all stood by the Marian Fathers. Why? Because of where they stand.

They stand with Christ.

Pep talk
“What we do is more important than anything from Amazon or Google or any big company.” These words came from Fr. Chris Alar, MIC — the current “Fr. Joseph,” director of the Association of Marian Helpers — to the staff of the Marian Helpers Center here in Stockbridge, Massachusetts, this past December.

“We are in the business of helping souls to advance in holiness,” he continued. “We want to get souls to Heaven. This is what the Association of Marian Helpers is all about.

“I’d like to take this time to thank you, on behalf of all the Marian Fathers and myself, for your hard work, long hours, and your sacrifice. Our Marian Helpers make sacrifices, too. They choose to support the works of the Marians because it’s important.”

His well-timed pep talk ushered in the New Year 2019, marking 75 years since the Marian Fathers made it official — teaming up with the laity to establish a spiritual benevolent society to do great good for Christ and His Church.

The Association has since been the Church’s leading promoter of devotion to the Immaculate Conception and the souls in Purgatory. By the grace of God, the Association has also helped lead the greatest grassroots movement in the history of the Church: the spread of the Divine Mercy message and devotion, as revealed to the Polish mystic St. Maria Faustina Kowalska (1905-1938).

Monday morning quarterback
Though Marian ministries span the globe today, in the years leading up to and since the founding of the Association, however, the Marian Fathers have faced difficult times and tough decisions. On some occasions, it seemed even their best efforts would be thwarted.

Take, for instance, the idea presented to Blessed George Matulaitis, the “Renovator” of the Marian Fathers, shortly before his death in 1927, to open a Marian house of studies in Washington, D.C. He agreed that the idea was a good one. It would place seminarians near The Catholic University of America, a major center for Catholic theological education. In the 1940s, to finance this small Washington community, the priests, brothers, and seminarians prepared missions, distributed prayer cards and leaflets, and published a magazine for the Polish clergy. When housing expenses and education costs grew beyond what they were taking in, they faced the possible closure of their house.

But God had other plans.

Indeed, in 1940, less than two years after the death of St. Faustina, a Marian priest from war-torn Poland, Fr. Joseph Jarzebowski, succeeded in bringing Divine Mercy materials to the United States. He received the materials from none other than Blessed Michael Sopocko, the confessor and spiritual director of St. Faustina, the Secretary of Divine Mercy.

In gratitude to the mercy of God for his escape, Fr. Jarzebowski promised to spend the rest of his life spreading this message of Divine Mercy. He received help in fulfilling that promise from the Felician Sisters of Enfield, Connecticut, and his fellow Marian Fathers in Washington.

The Marians printed simple Divine Mercy prayer cards — first for their family and friends, and then for a growing number of benefactors. As World War II continued, many people found comfort in the message of Divine Mercy.

The devotion spread, the number of benefactors increased, and the Marian community gradually got back on its feet.

Game changers
For more than a decade, things were looking up. In the 1940s, a young seminarian from Adams, Massachusetts, was impressing his religious brothers in Washington, D.C., with his religious zeal and personal touch. The future Fr. Walter Pelczynski, MIC, maintained correspondence with numerous people who believed in and supported the Marians’ work.

It was Fr. Walter, during a visit home, who first discovered the Eden Hill estate in Stockbridge, in western Massachusetts. He convinced the Marians to purchase the property. In 1944, here in Stockbridge, he established the Mercy of God Apostolate — later known as the Association of Marian Helpers.

He suggested that the Marians start a publication with teachings about Our Lady and the Divine Mercy message. In June 1944, the Marians’ first monthly magazine was printed in Polish. Under Fr. Walter’s direction, the editorial office, Divine Mercy materials, and files of benefactors and friends were transferred from Washington, D.C., to Eden Hill.

It was here, on Eden Hill, where the Marians officially established the Association of Marian Helpers as a spiritual benefit society of Marian co-workers among both the laity and the clergy. In 1947, the first quarterly issue of the English-language Marian Helpers Bulletin (now known as Marian Helper magazine) began publication.

The Association of Marian Helpers then made possible another sign of growth here on Eden Hill. The Marians were outgrowing the private chapel in their residence. In 1950, they hired Stockbridge architect Antonio Guerrieri to build a larger chapel, dedicated to the mercy of God. It would come to be known as the National Shrine of The Divine Mercy, the spiritual home of the Association, featured daily in EWTN’s airing of the Chaplet of Divine Mercy.

Moving goal posts
By 1953, the Center had distributed some 25 million pieces of Divine Mercy literature around the world. As before, though, their best efforts would be disrupted. In 1959, a ban prevented the spreading of the Divine Mercy message as revealed through St. Faustina until the message could be further studied and verified by theologians.

The Marians feared another financial crisis. The apostolate was renamed the Marian Apostolate and focused more on spreading devotion to the Blessed Virgin Mary and the message of God’s mercy as revealed in Scripture.

Did benefactors leave? Did donations drop? To everyone’s surprise, donations actually tripled! The ban would be lifted in 1978, but the Marians and their supporters had no way to foresee that 20 years earlier. With the ban lifted, the Association of Marian Helpers began to spread the Divine Mercy message and devotion with renewed enthusiasm.

How did the Marian Fathers and their Marian Helpers continue to rise above such setbacks? Noted speaker and author Fr. Seraphim Michalenko, MIC, who served as vice-postulator for St. Faustina’s beatification and canonization causes, explains, “The Lord will continue to bless us insofar as we are faithful to our mission to spread devotion to Divine Mercy and Mary Immaculate.”

The game plan
Although the Association was officially established in 1944, the idea was explored and written about decades earlier by none other than Blessed George Matulaitis. He knew the Marians alone could not bring the Gospel to every home. In his spiritual Journal, he speculated about a new association between clergy and the laity. He wrote:

Just as there are all kinds of charitable organizations with their rosters of numerous members, so too should there be similar organizations to preach, spread, and defend the faith. … A priest cannot reach them all, even if he tries his best to do so. The laity must come to the aid of the clergy so that both could work together in this most important task of spreading true Catholic teaching.

His call to service for the laity has five main aspects: a desire to renew everything in Christ, cooperation with Church leaders, bringing the faith into the workplace, performing works of mercy, and enlivening one’s service with a whole-hearted love and zeal for Christ and the Church.

These aspects remain the hallmark of the Association of Marian Helpers.

A winning team
Here are just some of the things that you have made happen:

The Marian Founder, St. Stanislaus Papczynski (1631-1701), was canonized in 2016. And we pray for the canonization of Blessed George — the man who imagined powerful and positive consequences when clergy and the laity work together for the glory of God.

Our work for Christ and His Church continues!