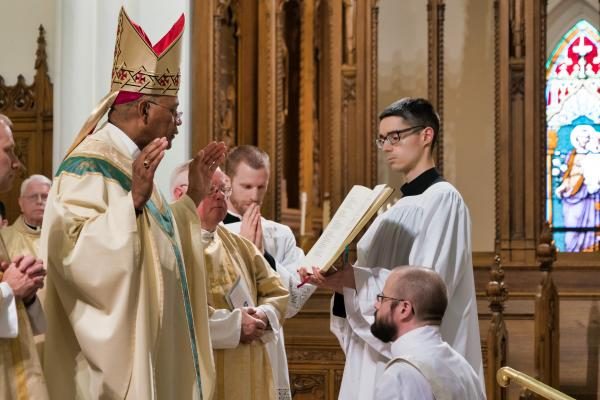 Drawn to the Marian Fathers’ love for Mary Immaculate, devotion to the souls in Purgatory, and mission of promoting Divine Mercy, Deacon Matthew Holladay, MIC, took the final step in his long vocational journey on Saturday, May 11, 2019.

In the very church where his sacramental life began, he made his priestly vows.

Before vesting him to the priesthood by the laying on of hands, the principal celebrant of the ordination Mass, the Most Rev. Martin D. Holley, a vir aggretatus (aggregate member) of the Marian Fathers, urged Fr. Matthew to keep Mary Immaculate close to his heart throughout his priestly ministry and to love others as her Son, Jesus Christ, loved others.

Quoting Pope St. John Paul II, Bishop Holley said, “To succeed in your intentions, entrust yourselves to the Blessed Virgin Mary always, but especially in moments of difficulty and darkness. From Mary we learn to surrender to God’s will in things. From Mary we learn to trust even when all hope seems gone. From Mary we learn to love Christ, her Son and the Son of God. … Learn from her to be always faithful, to trust that God’s Word to you will be fulfilled, and that nothing is impossible with God.”

Family, friends, and fellow Marians packed St. Louis Bertrand Church in Louisville, Kentucky, where Fr. Matthew was baptized. The Mass of Ordination marked the conclusion of a 20-year journey for the Marians’ newest priest.

A cradle Catholic, Fr. Matthew said that at around sixth or seventh grade, he started to make the faith his own after reading the lives of the saints.

“Around then, I started praying the Rosary every day, and I made time for personal prayer,” he said. “These spiritual practices laid the roots of my vocation.

“One day during the summer before my freshman year of high school, I was in my room praying the Rosary,” he said. “In a brief pause between decades, I heard the words in my heart, ‘Be a priest, my son.’ A peace came over me, and I was sure it was of God and perhaps a call from the Blessed Mother. This experience began a long road of discernment.”

After graduating high school, he spent the next 10 years discerning religious orders while also working odd jobs and taking classes long distance from Franciscan University of Steubenville, in Ohio.

But 10 years discerning religious orders without success was wearing him down. His spiritual director eventually advised him to consider the diocese instead. But a few weeks later, his mother handed him a copy of Marian Helper magazine, which included a vocation ad for the Marian Fathers. On the weekend of Sept. 8, 2007, the Feast of the Nativity of Our Lady, Matthew attended a vocation retreat in Steubenville hosted by Fr. Donald Calloway, MIC.

“At the retreat, I received graces that showed our Lord and Our Lady were drawing me to join the Marians,” recalled Fr. Matthew. “This included that it fell on the weekend before the beatification of the Founder of the Marians, Blessed Stanislaus Papczynski. Further, I received graces of confirmation that God had called me to serve Him as a Marian.”

He entered the Marian Fathers in 2008. But another obstacle would block his path. Around 2014, then-Br. Matthew started feeling ill without knowing exactly why. It took doctors time to figure it out, but eventually, he was diagnosed with an autoimmune disease called Crohn’s disease.

Soon, he became too ill to continue with school. “I was missing class periods,” he said. “I had to take a semester off. I withdrew from classes.”

One academic year later, he recovered and continued classes. He said he couldn’t have done so without the understanding and support of his brother seminarians and superiors. In fact, he believes his struggle with physical health has helped him spiritually.

Father Matthew has said of his upbringing, “My dad converted to Catholicism and came into full communion shortly before marrying my mother. My parents always made sure I went to Mass on Sundays and holy days of obligation. They both have been supportive of my vocation through all the stages of discernment. I could not ask for better parents.”

In an interview, Fr. Matthew’s mother, Judy, said, “I just thank God and the Blessed Mother for the gift of Matthew’s vocation. He calls me ‘the second best mom in the world, after Mary.’ That’s one time I don’t mind coming in second place!”

In his homily at the Mass of Ordination, Bishop Holley thanked Fr. Matthew for his vocation, his love, sacrifice, and perseverance in following the call of Jesus Christ. He underscored that Jesus wants us to love as He has loved and to give ourselves in loving service to others.

“If we open our hearts to His love and obey His commandment to love our neighbor,” said Bishop Holley, “then we will bear much fruit, fruit that will last for all eternity.”

Father Matthew celebrated his first Mass on Sunday, May 12, which is the World Day of Prayer for Vocations, particularly vocations to the religious life.

“I just want to thank all the Marian Helpers for their prayers and support,” said Fr. Matthew.

Father Matthew serves at the National Shrine of The Divine Mercy, in Stockbridge, Massachusetts, the spiritual home of the Association of Marian Helpers. 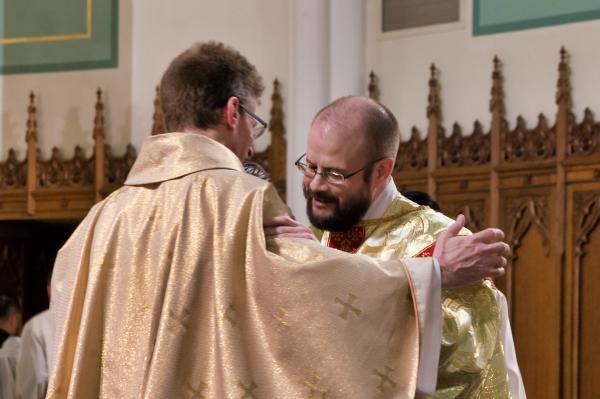 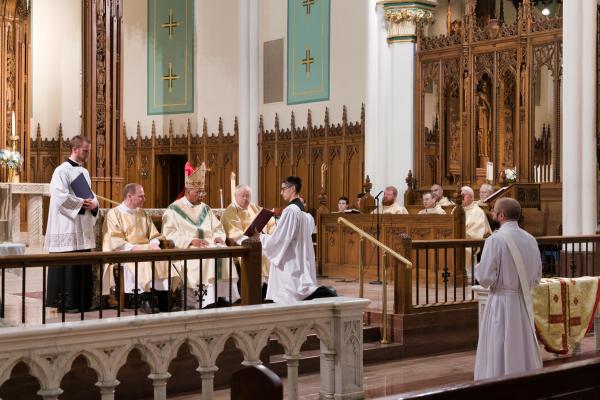 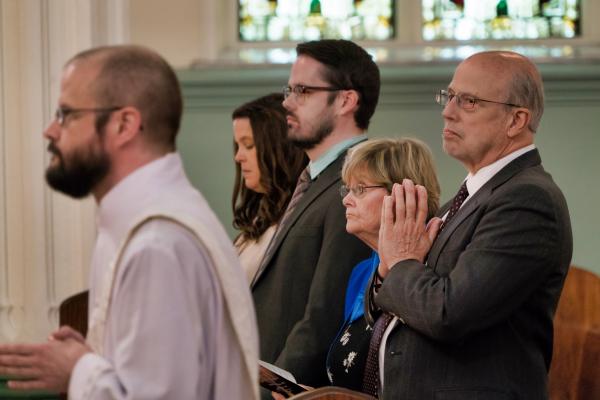 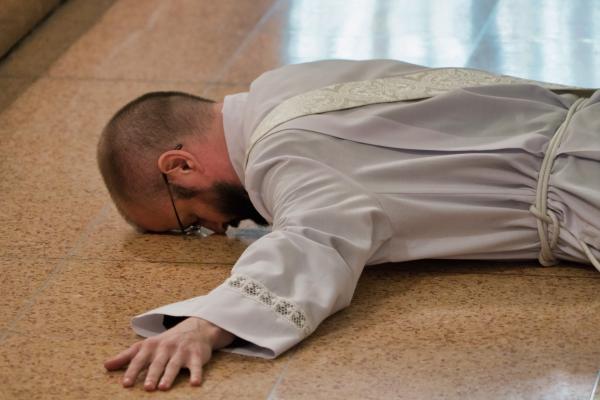 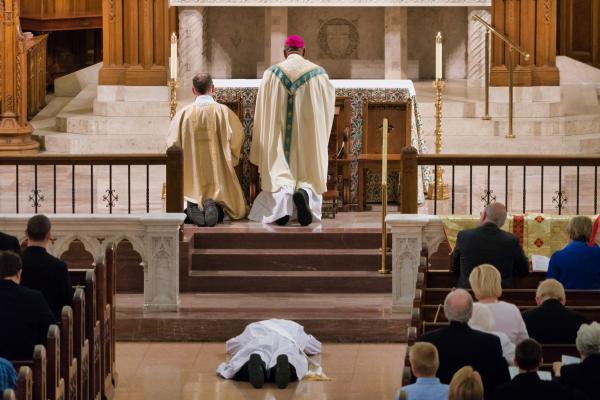 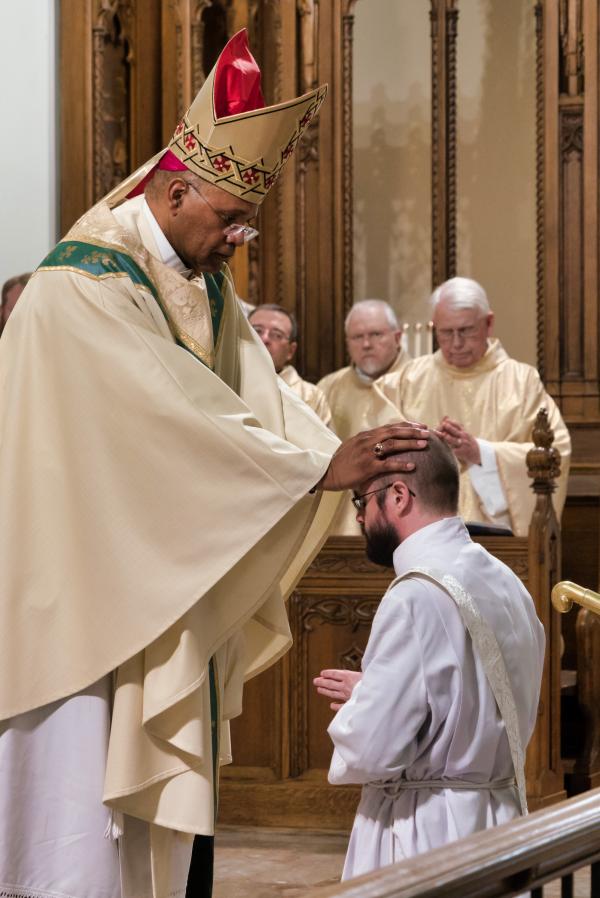 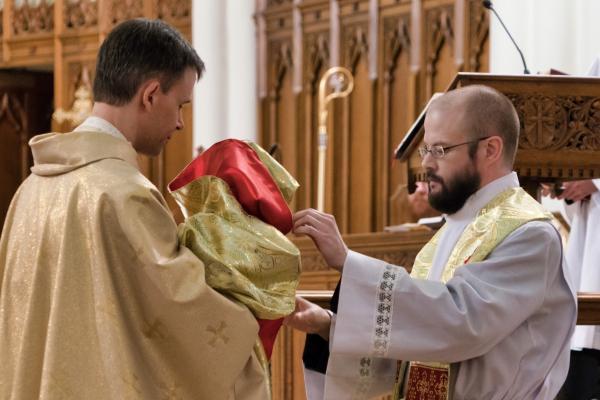 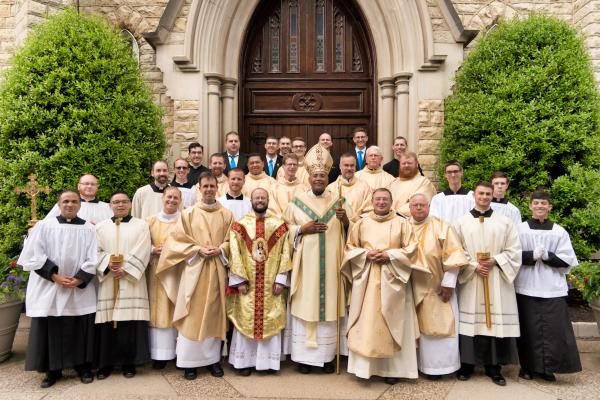