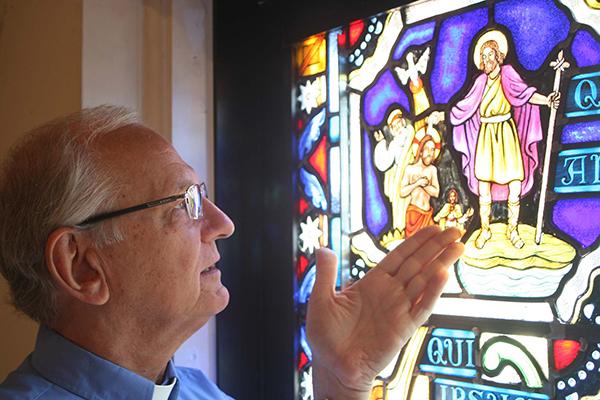 Brother Leonard Konopka, MIC, a religious brother in the Congregation of Marian Fathers of the Immaculate Conception of the Most B.V.M., died on Sunday, April 5, 2020 at the Little Sisters of the Poor Jeanne Jugan Residence in Washington, D.C. He was 86.

Born on Aug. 8, 1933, in Detroit, Michigan, Br. Leonard was the youngest of seven children, of whom four became priests or religious.

He entered the Marian novitiate in 1951 and made final vows in 1958. During that time, he helped with the construction of the National Shrine of The Divine Mercy in Stockbridge, Massachusetts, by carving some of the decorative wood pieces.

He was a professed religious for 67 years and spent about 45 of those years in the Washington, D.C., area. He served the community in many different capacities, including provincial councilor, member of the provincial formation committee, and superior of the Stockbridge and Brookeville houses, as well as treasurer and procurator (shopper) in the various communities in which he lived.

In the late 1970s, he helped found the Mother of Mercy Prayer Group at the National Shrine of The Divine Mercy, which continues to gather to the present day. He was also the cofounder of the Marian Home of Prayer, located at our former novitiate in Brookeville, Maryland, and on Oakview Terrace in Washington, D.C. The Home of Prayer provided spiritual healing and retreats and served many people from around the country.

He greatly cared for his confreres and for the many friends of the community, and he helped provide for the upkeep of the Divine Mercy Chapel in Brookeville and the house chapel in Washington, D.C.

Always ready with a smile and a humorous line, Br. Leonard was like a brother to all. He loved classical music, swimming, and sharing meals with families and friends.

He once shared that what drew him to become a religious brother in the Marian Fathers of the Immaculate Conception was the desire to serve others the way Christ did.

“Service is what I came here for, to be like our Lord,” he said. “I came not to be served but to serve. Everything else is insignificant and passes away or falls apart; but [when it comes to] serving … there’s always a need.”

Reflecting on his role as the shopper for the Washington house, he added, “It’s bigger than [merely] buying food. That’s not the end [goal]. Buying food is the means by which you serve the Church.”

Over the years, his particular responsibilities would come and go.

“The Home of Prayer ended, the novitiate [in Brookeville] closed. But what kept me going was knowing that I was serving Christ through it all,” he said.

In his later years, Br. Leonard faithfully spent a holy hour every evening before the Lord. Earlier in his life, he says, he might have occasionally spent 1.5 or even 2 hours watching TV or a movie. Then, at a certain point, he sensed the Lord asking him, “If you can spend two hours watching a movie, why not spend one hour with me?” From that point onward, he was always faithful to his holy hour and to meditating on the Word of God.

Brother Leonard was a gifted pastoral councilor and spiritual director. Frequently, he would be surprised by the inspirations that the Lord would put on his heart while directing souls. He once said with a sense of wonder, “People show up” for spiritual direction, and helpful words “come out of my mouth.” He attributed this as a gift from the Lord and also to the time that he spent before the Blessed Sacrament.

Brother Leonard was predeceased by his parents, Anthony and Stefanie (Ostafin) Konopka; his brothers, Fr. Edward, Benjamin and Joseph; and his sisters, Helen Saunders and Sr. Edwardine. His sister Sr. Josetta is still living in Ohio. He has 10 nieces and nephews, 16 great-nieces and great-nephews, one great-great-niece and one great-great-nephew.

He was much loved by his family, who enjoyed spending time with him whenever he would visit them in Florida or Detroit. Many friends from different parts of the country, but especially from the Washington, D.C. area, will greatly miss his spirit of loving service and his sense of humor. And the members of his religious community recall with great fondness his Saturday morning eggs, his love for the Washington Redskins, and how he would describe any tasty food as “deadly!” or even “double deadly!”

Despite having been in and out of hospitals and a rehab facility for nearly two months, he was able to be transferred a few days before he died to the Little Sisters’ Residence. There, he received the Anointing of the Sick and, on the day he passed, Holy Communion.

Due to the coronavirus, the funeral Mass and burial at the National Shrine of The Divine Mercy in Stockbridge will be held privately, but the Marian Fathers look forward to celebrating a public memorial service when social distancing restrictions are lifted.

May Br. Leonard’s soul and the souls of all the faithful departed rest in peace.