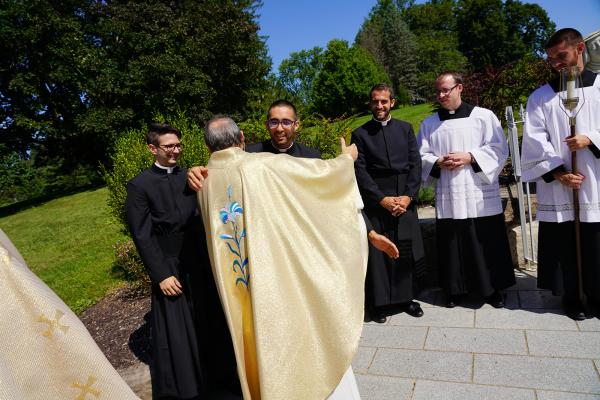 Committed to Christ and service to the Church, three young men who have a love for Mary Immaculate and zeal to spread the message of Divine Mercy professed their first vows as members of the Marian Fathers during Holy Mass on the Solemnity of the Assumption of the Blessed Mother into Heaven, Saturday, Aug. 15, at the National Shrine of The Divine Mercy.

“The feeling is just amazing,” said Br. John Patrick, MIC, of Angola, Indiana, following the Mass. “This is a tremendous grace. Obviously it’s a calling, and I am not worthy of this. It’s all God.”

“I’m so grateful to God for all the blessings He has given me,” said Br. Harrison, MIC, of Dunmore, Pennsylvania.

The three men will now continue their religious studies toward the priesthood.

With friends, family, and fellow Marians proudly looking on — both in person and via livestream — John Patrick (known as “JP), Harrison, and Ryan each stepped forward to recite the moving words of profession:

I, (name), for the glory of God and the honor of the Most Blessed Virgin Mary and all the Saints, in the presence of the entire Community, through your hands, most Reverend Father, vow to Almighty God in the Congregation of Marian Fathers of the Immaculate Conception of the Most Blessed Virgin Mary, according to its Constitutions, the three vows of chastity, poverty, and obedience for one year. So help me God and this holy Gospel.

With the vows, they officially became religious brothers, with the suffix “MIC” indicating their membership in the Marian Fathers’ religious community.

Father Kaz accepted and confirmed their one-year vows on behalf of the Marian Fathers and the Church. Following the profession, Fr. Kaz proclaimed, “I earnestly commend you to God Almighty and to Mary Immaculate, our Mother and Patroness, that you may be able to joyfully and faithfully carry out your vows, unite with God, [and] attain holiness and eternal life.”

Father Kaz then presented the new brothers with the Blue Scapular of Our Lady, which serves as a sign of honoring and imitating Mary, and an invitation for the wearer “to give Christ … your undivided service in the Church.”

The three new brothers then processed to the sacristy where, for the first time, they donned ecclesiastic garments. The change of clothing — from the white shirts and black pants of novices to black clerical garb — symbolizes the putting away of the old life and the taking up of the new. Father Kaz prayed that God “remove from your heart the vanity of this world, which you renounced at your Baptism. May the Lord vest you in ‘the new man,’ who was created according to God in justice and true holiness.”

Father Kaz then presented a related reflection on the meaning of the Solemnity of Mary’s Assumption into Heaven.

He noted that the Church views Mary’s Assumption, body and soul, into Heaven as “a singular gift” by which Our Lady was given the grace to participate in her Son’s Resurrection. “To honor [Mary],” said Fr. Kaz, “is to reflect on our own life and our future glory” since God has made all of us to be holy and immaculate.

“She is the sign, the realized sign, because where she is, we shall be,” Fr. Kaz said.

Noting the courageous and momentous step the three men have made by professing religious vows, Fr. Kaz explained the solemn intention at hand. The three vow “to be like Christ” without counting the cost — to be obedient as Christ was to the Father, poor like Christ, and chaste like Christ.

Yes, it’s a tall task. Still, vows are a special gift whose fulfillment is made possible by the grace of God. When we cooperate with God’s grace, we become more free, Fr. Kaz said, “more giving of ourselves, more obedient, because the grace is at work. … The Lord promises that He will be with us, and He will feed us. He will nourish our hearts, our good intentions, our will.”

How? By the Eucharist, and by His Word, which allows us to see all of God’s creation and our Christian mission by the light of His truth “and the light of our eternity,” said Fr. Kaz.

“And so we look to the future not with fear, but with joy and confidence,” he said, “because we know what God has prepared for those who love Him.”

Among the Marian priests in attendance at the Shrine was Fr. Joe Roesch, MIC, the Marians’ vicar general who lives in Rome, Italy.

If you listen in to the broadcast, you’ll hear the beautiful music and singing provided by Br. Ken Galisa, MIC, Br. Steven Camara, MIC, along with a group of Marian seminarians.

The Marian Fathers wish to thank our Marian Helpers for their continued prayers and financial support for our seminarians — the priests of tomorrow.

May God continue to bless the Marian Fathers and Marian Helpers and use us as His instruments to bring Christ’s mercy and tender love to all the world!