Skip to content
Poland, Skórzec: Fr. Stanisław Chryc, MIC, Knight of the Order of the Smile, passed away 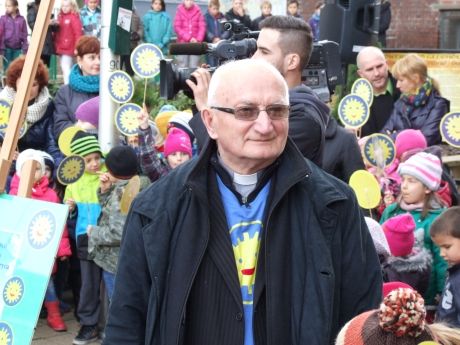 A long-time member of the religious house in Skórzec, he lived to be 90 years of age, of which 70 were spent in the Congregation. He was born in Rdzawka near Rabka on April 18, 1930, to Jan and Stanisława née Twaróg. After primary school in Rdzawka in 1946, he attended 8th grade at the Secondary School in Rabka. In 1948-49, he completed the 9th-grade program as well other courses at the Junior High School at the St. Konarski Private High School of the Piarist Fathers in Krakow. In 1949, he was admitted to the Congregation and began his novitiate. He made his first vows in Skórzec on September 8, 1950 and was then sent to Bielany, where he continued his education as a 10th-grade student. In 1952, after graduating, he resided at our religious house in Warsaw-Praga. There, he also completed two years of seminary studies. He made his perpetual vows in Gietrzwałd on August 15, 1956, following which he was dispatched to Skórzec to work on the monastery farm during his break time. He completed his first year of theological studies (1957-58) in Warsaw-Praga. He did the following three years of theology (1958-62) at the Major Seminary in Włocławek and on June 24, 1962, he was ordained to the priesthood by Bishop Antoni Pawłowski. After his ordination, he completed a pastoral year with the Conventual Franciscans in Krakow.

Father Stanisław’s first pastoral assignment was in Kiwity (1963), where he worked as a catechist and assisted in pastoral work. A year later, he was sent to work in Ponice, subordinated to the house in his hometown of Rdzawka. He served there for five years and then moved to Głuchołazy, where he served as a pastoral assistant and catechist for 15 years (1969-84). For the next three years (1984-87), he worked in Zakopane, organizing there the construction of a new religious and residential complex in Cyrhla, while also carrying out pastoral ministry. Afterwards for three years (1987-1990), he was the house superior and rector of the church in Sulejówek. In 1990, he was transferred again to Głuchołazy and for six years worked as a chaplain in various Głuchołazy hospitals, supervised the parish branch of Caritas and assisted in pastoral ministry (1990-96). After this position was transferred to the jurisdiction of the Bishop of Opole, Fr. Stanisław was transferred to Skórzec. There, he fulfilled the duties of pastoral assitant, carried out most especially in his role with the parish branch of Caritas. He also cared for the sick and families in need. He was actively involved in organizing summer holidays for children from large, poor or dysfunctional families and took under his spiritual care two children and teenagers’ dance groups. In 1997, the Chapter of the Honorary Award of the Society of Friends of Głuchołazy presented Fr. Stanisław with the “Głuchołazy She-Goat” award for 1996 in the category of “Personality,” and in 2010 the International Chapter of the Order of the Smile named him the Knight of the Order of the Smile. He died in Skórzec on October 18, 2020.