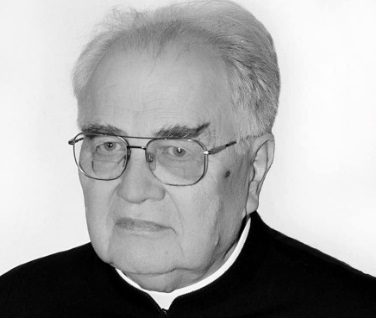 On November 1, 2020 Father Tadeusz Mierzwiński passed away after a long illness in the monastery of Skórzec. He was 85 years of age, a member of the Congregation for 69 years, and a priest for 60 years.

He was born on January 16, 1935, to Antoni and Stefania (nee Dąbrowska) of Kalinów Nowy in the district of Wysokie Mazowieckie of the Diocese of Łomża, Poland. After completing the 7th grade at the school in Zambrów, he was admitted into the Marian Fathers’ program for young men in Głuchołazy in 1948, and a year later to the school in Bielany-Warsaw. In 1950-51, he completed his novitiate in Skórzec and on Aug. 15, 1951 he made his first profession of vows. During the school year of 1951-52, he studied at the Bielany Scholasticate and continued his education the following year at our house on Wieleńska Street, where he took final exams before the vocation committee, chaired by the provincial superior. For the next year, he served as the porter of the same house. In 1954-56, he studied philosophy at the Major Metropolitan Seminary in Warsaw.

Tadeusz made his perpetual profession of vows on Aug. 15, 1956 in Gietrzwałd. He studied theology at the Major Seminary in Włocławek from 1956-61, where, on June 11, 1960 he was ordained a priest at the local cathedral basilica by Bishop Antoni Pawłowski, the Ordinary of Włocławek.

In 1960-61, Fr. Tadeusz completed his pastoral course with the Conventual Franciscans in Krakow, following which he served in pastoral ministry and catechetics in Głuchołazy, where he also was a hospital chaplain until 1962 and, from 1964, a parish vicar. In 1966 Fr. Tadeusz was appointed house superior in Stoczek Klasztorny, where, from 1966-1968, he worked as an assistant vicar at the parishes of Kiwity and Krekole.

In December 1968, while still the house superior in Stoczek, he received permission to live outside of the house and went to Elbląg, where he organized a Marian pastoral center. In 1972, a religious house was established there, and Fr. Tadeusz became the first superior and treasurer of the house, while also serving as pastor of the newly created parish of All Saints and overseeing its construction. He carried out these duties until 1981, when he was transferred to Warsaw-Stegny. There he was entrusted with the office of the house superior and the pastoral center administrator.

Then, on May 25, 1982 he became pastor of the Our Lady of Mercy Parish. Father Tadeusz served as house superior and treasurer until 1987, and then again from 1990-96 and in 2002-05. In the other years of his residency at Stegny he was a member of the house council. From 1990-99, he served as the 4th provincial councilor of the Polish Province. He also served from 1989-2005 as an assistant for the lay movement “Legion Maryi” (Mary’s Legion) for the Archdiocese of Warsaw and was the deputy dean of the Deanery of Służew. Additionally, he was a member of the Council of Priests of the Archdiocese of Warsaw. In addition to all these various offices and roles, Father Tadeusz fostered the growth of his parishioners’ spiritual life by helping to create various spiritual groups, and he took care of the parish church décor. In 2005, he became the promoter of the Confraternity of the Immaculate Conception at the Skórzec religious house.