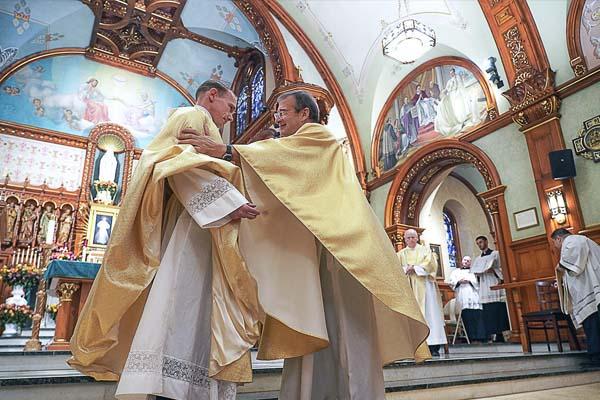 Deacon David Smith, MIC, was ordained to the priesthood on Monday, Aug. 17. Watch the livestream from the National Shrine of The Divine Mercy.

Father David Smith, MIC, was supposed to be ordained in his home parish in Azusa, California, on July 11, the Feast of St. Benedict. But as with many scheduled events in 2020, plans changed. He was ordained, instead, on Monday, Aug. 17, by the Most Rev. Robert. J. McManus of Worcester, Massachusetts, at the National Shrine of The Divine Mercy in Stockbridge, Massachusetts, before several Marian Fathers and brothers as well as a handful of his family members.

Father David’s many brothers, sisters, nieces, and nephews, as well as dozens of other family and friends were tuning in from around the country via livestream to watch the ceremony. None of them had expected the power to go out during the ceremony. Thankfully, it didn’t — but it was supposed to.

In the morning, the Marian Fathers had received word from the local power company that a scheduled outing would take place at 11 a.m., right in the middle of the ceremony, which was set to be livestreamed across the country. At the end of an ordination ceremony, which had gone on without a hitch, the Provincial Superior of the Marian Fathers, Fr. Kaz Chwalek said, “I have to tell you a secret. At 11 a.m., we were supposed to lose power, so I was begging the Lord during this Eucharist that He would provide us with power … and the Lord has done this. I am so grateful!” By some miracle, at the last minute, word was received that the power outage wouldn’t happen until later in the day, so the ceremony could continue well-lit, with dozens of Fr. David’s family and friends from around the country tuning in.

Father David comes from a big family, the sixth of nine children whom he went to Mass with every Sunday growing up. When he was in his teens, his work schedule would no longer allow him to attend Mass at the same time as his family. “I decided to start going to Mass on my own as soon as work was over,” he said. This experience early on served as a turning point that helped him make his faith his own.

Later, in 2008, not long after the death of his father, David went on a pilgrimage to the Holy Land with his mother, Joan. “This experience brought me deeper in my faith than I had ever gone,” he said. He started going to daily Mass and spending a lot of time in Adoration.

Up until then, he had been working at Walgreens Corporation in the manager training program. “I had been saving money to get married and buy a house so that I could move out of my parents’ place. But all that changed.”

The next year, he went on another pilgrimage, this time to Poland. “That’s [when] I felt called to join the Marians of the Immaculate Conception,” he said. “[On that trip,] I learned about St. Faustina, the message of Divine Mercy, the Marians, Blessed George [Matulaitis], and I also learned about Fr. Donald Calloway, MIC, whom I had heard [give] talks [when I was a] younger child growing up in California.”

After that pilgrimage, Fr. David went on a “come and see” retreat with the Marians in Steubenville, Ohio. “I appreciated the fellowship of all the Marians on that retreat,” he said. He applied to the Marians and entered as a one-year postulant in 2011.

When Fr. David first told his mother about feeling called to join the Marian Fathers she was supportive. “I thought it was a beautiful thing,” she said. “In the beginning, I knew it would be one step at a time for him, and here we are today. I knew it would be a sacrifice, but it would be such an honor to be a mother of a priest. That’s a special grace.”

Just before David discerned to enter the Marians, Joan had been diagnosed with an autoimmune disease that would make her blind within a year. “So, David asked me if I was OK with him leaving and entering the Marians. And I said to him ‘yes.’ I have my other children [to take care of me] but even if that weren’t the case, God’s going to take care of me. As St. Padre Pio said, ‘Pray, hope, and don’t worry.'”

At first, Fr. David faced a difficult transition going back to school after so many years away. “I felt a little rusty. [But] once we say ‘yes’ to God, there are always challenges,” he said. “We just need to remember why we are called to a specific vocation in life and that God will help us to persevere.”

And persevere he did. He was ordained to the transitional diaconate on Jan. 4, 2020, providentially the anniversary of his baptism as an infant.

“The world needs Marian priests today because we know that Mary as the Mother of Jesus is also our Mother,” Fr. David said. “Jesus told St. John the Evangelist, ‘Behold your Mother’ when He was on the Cross. [So] we can also call on the Blessed Virgin Mary to help us in our needs, to help us grow in the spiritual life … and to follow Jesus more perfectly through her intercession.”

At the end of the ordination Mass, Fr. David placed a single rose in front of a statue of the Blessed Mother, as is traditional for the Marians. Meanwhile, the chorus of five Marian seminarians harmonized the hymn “Mother of Grace, O Mary Blest.” After the ceremony, Fr. David could be seen giving a blessing by way of a video-call to family back home.

“I’m just feeling a lot of gratitude and want to give thanksgiving to God for the gift of the priesthood and my ordination,” he said. “It’s a real blessing to be united to Christ crucified, to share in His mission, His ministry, to have the chance to shepherd the people, to lead and guide those who fall and to help bring them back to the fold. It’s a blessing to be called to shepherd them so they are not lost but that they might see the light of Christ. I’m excited to guide them to Him, to help heal them through the Sacraments, to continue to bring Jesus to them, to be Jesus to them.”