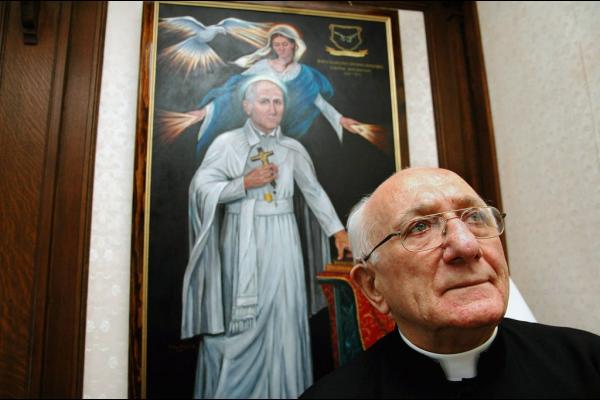 He was baptized in the church that housed the Black Madonna. He was good friends with the priest responsible for bringing the Divine Mercy message to the western hemisphere. During World War II, he spent time in a Soviet labor camp. He credited the Blessed Mother for leading him to the Marian Fathers.

Father Walter Gurgul, MIC, one of the Marians’ cherished priests who until only recently lived and ministered at the National Shrine of The Divine Mercy in Stockbridge, died Dec. 6, at Berkshire Medical Center in Pittsfield, Massachusetts. He was 90.

Father Walter is remembered as a gentle soul, a scholar, an athlete, and a dogged defender of the Catholic faith.

He was born on Sept. 28, 1930, on a small farm in Belz, in eastern Poland (now western Ukraine) in the city which held the Black Madonna for many years (before it was enshrined in Czestochowa). He had a simple, happy childhood that came to an abrupt end in 1939, when the Soviets invaded Poland.

“The 10th of February 1940, a day one remembers so well,” Fr. Gurgul shared in a recent interview for Marian Helper magazine.

The Gurgul family of eight and their neighbors were among the hundreds of thousands of Poles forced onto freight cars and brought to Siberia following the Soviet invasion. There they were placed into squalid labor camps where at least half of their fellow Poles died from starvation or disease.

“It was bitterly cold,” Fr. Gurgul remembered. “And we were constantly reminded that we were ‘destined to die here like dogs.’ We starved for more than three days at a time.”

The Gurguls were given a single room with a bread oven and one bed. His father worked as a haymaker, and his mother carried water. His beloved father eventually fell ill and was sent to a hospital, never to be seen again.

Meanwhile, young Walter attended school Monday through Saturday. He did so well that the KGB began to take note of him. His father’s words to him echoed in his ears: “My dear little boy. Child, learn; learn as much as possible. It will be useful and serve you in your life.”

Fearful that her son might be taken away by the KGB and without enough money to provide for food, Walter’s mother began to hope for an opportunity to escape.

In the summer of 1941, the camp’s entire Polish community was gathered by the Soviet authorities. Some thought, “We will be shot on the spot!” To their great surprise, the Poles were told they were being granted their freedom. However, they later overheard those who had a smuggled radio say that on June 22, 1941, Hitler had declared war on Russia, and Stalin wanted to gather the Poles to create a Polish army to fight against the Germans.

On a cold night in November 1941, pulling their children behind them on sleds, Walter’s mother and aunt set out on foot to escape, making the more than 18-mile trek through the forests to a railway station.

“Where did they get their strength?” Fr. Gurgul asked. “It was their innate motherly instinct which drove them to that heroism, to save their beloved children.”

He added, “I remember the wolves and wild bears. It was bitterly cold and scary.”

They hopped upon a train heading south. Arriving in Uzbekistan, they were greeted by the Polish army, who took compassion on them and gave them a hut made out of straw and clay. Walter worked on his hands and knees picking cotton in the fields. The only food they could scrounge up was a rice porridge. Desperate for meat, his mother killed a stray, mangy dog. A few days after that meal, the whole family, save the eldest boy, fell ill with typhoid. Walter witnessed the death of his 2-year-old brother, Bronus, and his 4-year-old sister, Irenka.

After recovering, the remaining members of the family met a Polish officer who recognized their name.

He led Bolek, the eldest son, and Walter to safety — to the platoons where more than 70 young Polish boys were being housed. By the end of February 1942, the Polish military announced that they needed to send the young boys abroad.

“We were leaving the East forever,” Fr. Gurgul said. “We left behind all misery and hardship. A new chapter of life had begun.”

Due to the British Protection Act, Polish survivors could be sent to British colonies. His mother and the youngest children were sent to Kenya, while his eldest brother was sent to Egypt and Walter was sent to Palestine. There he attended grammar school in Nazareth and a Salesian high school in Jerusalem.

Indeed, after being told by the Communists as a boy that if his family ever tried to leave Russia they would suffer and die like dogs, Walter ended up in the Holy Land!

In 1947, the British Protection Act expired, and Walter was sent to England where he was reunited with his mother and siblings. He continued his seminary studies, desiring to become a Salesian priest.

One day in 1950, while visiting his mother, he ran into a Polish chaplain who said to him, “Oh, Walter, you’re not going to be a Salesian priest, you are going to be a ‘Polish’ priest.”

Meanwhile, Fr. Joseph Jarzebowski, MIC (the Marian who brought the Divine Mercy devotion to America), and a handful of other Marians had just arrived in England and established a novitiate in Hereford. Walter was accepted into the Congregation, arriving on Jan. 19, 1953.

He said Fr. Jarzebowski “had a profound effect on me.”

“He was always talking about Mary,” Fr. Gurgul said. “In fact, he used to greet everyone with ‘Ave Maria!’”

“It was the most beautiful day of my life, because my mother was there to witness it,” he recalled.

Following his ordination, he spent another two years in Rome, studying a new language every two years. At one point he knew Polish, Russian, German, French, English, Latin, Greek, Italian, and Portuguese. He had asked permission to go study in Paris and received permission from his superior – it was a dream come true. But just before leaving Rome for Paris, he received news that a Marian was sick in England and Fr. Gurgul needed to return to help teach at Fawley Court.

He taught geography, Latin, and other subjects, including sports master. He loved soccer and tennis. He adopted the style of teaching which he learned from the Salesians – pray with the students, teach the students, and play with the students! Even his most troublesome students loved him and got high marks in his classes. He also was headmaster for the school until its closing in 1986. He continued to serve in parishes in the area.

Father Gurgul came to the United States in 1997. He served at the Marians’ parish in Plano, Illinois, for a period of time. But most of his years in the U.S. were spent at the Shrine in Stockbridge, where he earned a reputation as an excellent confessor.

“He would spent hours at a time in the confessional,” recalled Fr. Kaz Chwalek, MIC, provincial superior of ther Marian Fathers in the United States and Argentina. “And he was a Scripture scholar. His homilies were very moving and drew deep into his knowledge of Scripture.

“Also, he just always tried to be helpful,” Fr. Kaz said. “He helped teach Latin to our seminarians. He would clean the house late at night or very early in the morning — not because he had to, but because he wanted to. He would do so many little things that no one knew about.”

Throughout his life, Fr. Walter would keep a corrspondance with fellow Siberian exiles. He would often speak about the kind, poor Russian women who gave what they could to help the Polish survive as they fled Siberia.

Father Walter credited his mother for instilling in him a love for Our Lady.

“That became the greatest spiritual influence of my life,” he said. “As a consequence, both before and after becoming a priest in Poland, it seemed natural to pray so much to the Blessed Mother — oh, so many prayers, and all the time she was listening.

Even as he celebrated his 60th anniversary as a priest this past summer at Kimball Farms nursing home in nearby Lenox, where he lived his final year, Fr. Walter said that his relationship with the Blessed Mother “feels as fresh and new as ever.”

“I involve Our Lady in everything I do,” he said. “For example, before I preach, I ask the Blessed Mother for her guidance.

“When you love Mary, though, you run out of words. We have no words to properly express our praise and love for her. Sometimes, the only word that comes to my mind is her name: ‘Mary … Mary … Mary.”

His favorite prayer was the Angelus.

“It sounds, perhaps, strange, but I pray this after I take my morning shower and I’m drying off,” he said. “I feel clean, and praying the Angelus cleans me inside. Clean body, clean soul! Then, at night at the end of the day, after my prayers, the last thing I do is grab a Rosary and keep it with me as I sleep.

“My advice to all who will listen: One, make your last words of the day an Act of Contrition for anything you might have done to offend God. Two, stay in touch with Our Lady. She brings us to Jesus. Three, always carry a Rosary, wear a scapular, or have a prayer card with you.

“Also, keep in mind what Our Lady said at Fatima. She’s concerned for us, her children. She’s worried about our future, about our final happiness, like any mother. That’s why she appeared at Fatima, to help us and to save us. This is more important today than it was 100 years ago.

“God will help anyone, as He helped me, if they approach Him through a love of Mary,” Fr. Walter said. “She never fails us.”

The Marian Fathers wish to thank Kimball Farms in Lenox for the great care they provided for Fr. Walter in the last year of his life.

In Fr. Walter’s last days, a Catholic nurse would pray the Rosary with him at Berkshire Medical Center. The hospital chaplain administered the last Sacraments, and Fr. Kaz granted him the Apostolic Pardon for the remission of all his sins and asked the Lord to release him from all punishments in this life and in the life to come.

“I thanked him, said goodbye, and surrendered him to the Lord, praying that Our Lady may greet him and take him to Jesus,” Fr. Kaz said.

A liturgy of Christian burial will be celebrated on Thursday, Dec. 10, at the Shrine. Due to COVID restrictions, attendence is limited to members of the Marian Fathers.

We thank the Lord for giving us Fr. Walter Gurgul.