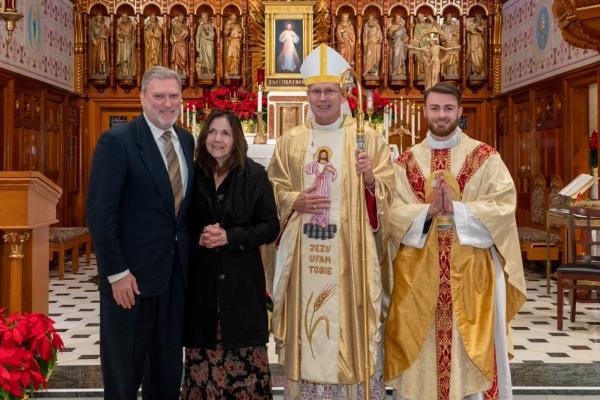 The Most. Rev. F. Richard Van Handel Spencer, Auxiliary Bishop of the Archdiocese for the Military Services, USA, was the main celebrant and ordaining bishop. Father Matthew is a lieutenant (junior grade) in the U.S. Naval Reserve as a chaplain candidate. He will be called to active duty as a chaplain in the U.S. Navy after three years of priestly ministry.

Joining a large group of Marian priests, brothers, and seminarians were Fr. Matthew’s parents, Dr. Patrick and Nelly Tomeny (pictured above with Bishop Spencer), along with eight of his nine siblings, assorted relatives, and friends. In his homily, Bishop Spencer noted that Fr. Matthew served at the altar at his episcopal ordination in 2010. “What a great joy for me to come to this altar to serve you and this community at your ordination,” he said. “What goes around really does come around, for sure!”

The Good Shepherd
“Today you are to be configured the Christ, the Eternal Priest,” Bishop Spencer continued. “Let your teachings be nourishment for the People of God. Let your holiness of life be a pleasing fragrance for Christ’s faithful, so that you may build up by word and example the House which is the Church of God.

“Keep always before you the eyes of the example of the Good Shepherd, who did not come to be served but to serve, and who came to seek and to save what was lost.”

The Very Rev. Fr. Kazimierz Chwalek, MIC, Provincial Superior, shared a letter to Fr. Matthew from the Most Rev. Timothy P. Broglio, Archbishop of the Archdiocese for Military Services, USA, who regretted not being able to attend in person.

“The call to priestly ministry is a great gift, and offers the occasion to serve others in persona Christi,” Archbishop Broglio wrote. “The serenity that comes from that constant response to divine grace and the needs of those entrusted to your care is a marvelous experience. Even after 44 years, it is exciting to be a priest.

“Your Congregation will be enriched by your ministry and those you serve will be inspired by commitment and enthusiasm,” the archbishop concluded. “I truly rejoice in this day.”

A native of Florida, Fr. Matthew, 27, is one of the youngest men to be ordained to the Marian Congregation.

“I feel very blessed and joyful,” an elated Fr. Matthew said after the ordination. “I am thankful to all those who have been praying for me and supporting me over all these years. I go forward now to serve wherever God wants me to be His instrument.”

Serving in Illinois
Growing up on the shores of Tampa Bay on Florida’s west coast, Fr. Matthew is comfortable with the water. He enjoyed sailing with his grandfather in Louisiana and was always interested in his collection of model sailing ships. “I can swim and I don’t get seasick,” he says.

That’s good to hear, as the newly-minted Fr. Matthew is preparing to sail the ocean blue as a chaplain in the United States Navy.

Father Matthew completed his theological studies at Dominican House of Studies this past May, and is currently serving at our Marian parishes in Illinois, St. Mary’s in Plano and St. Patrick’s in Yorkville.

“Both parish communities have been very welcoming,” Fr. Matthew says. “As a deacon I was getting a lot of practice, performing baptisms, presiding at funerals, and preaching at Mass. I especially like working with the young adult group and Bible class. I enjoy sharing what I have learned about the Catholic faith and passing it on.”

Parental example
Father Matthew credits his parents, Patrick and Nelly, for setting a good example, gathering their 10 children (Deacon Matthew is number four) every night to pray the Rosary before the Divine Mercy image.

“What Fr. Patrick Peyton, CSC, said is absolutely true: ‘The family that prays together, stays together,’” he says.

The call to the priesthood came early, at age 13. “I was reading a book on hell,” he recalled. “Upon finishing, a profound thought came to me: ‘I want to be a priest to save souls.’”

His last year in high school, a religious priest introduced Matthew to regular Eucharistic Adoration which intensified his faith and discernment to the priesthood. He entered the Marian novitiate in 2013, then returned to his studies at the Franciscan University of Steubenville, graduating in 2017 with a degree in Philosophy and Humanities & Catholic Culture.

Where the need is greatest
Father Matthew cites the wisdom of Blessed George Matulaitis (1871-1927), Renovator of the Marian Congregation, in his decision to become a Navy chaplain.

“Blessed George encouraged the Marians to go and serve where the need is greatest,” he explains. “There’s a huge shortage of military chaplains, especially in the Navy. You can be on a ship at sea for eight months and never have access to a priest, never receive the Sacraments.”

Currently, the U.S. Navy has only 50 Catholic priests on active duty, serving a Catholic population of 135,000 sailors, Marines, and Coast Guard personnel worldwide—and that’s not counting their family members. Chaplains are under the auspices of the Archdiocese for the Military Services, USA.

Father Matthew completed Officer Development School in Newport, Rhode Island this past summer and is a lieutenant (junior grade) in the U.S. Naval Reserve as a chaplain candidate. He will be called to active duty in the U.S. Navy after three years of priestly ministry. Father Donald Van Alstyne, MIC, recently retired as a U.S. Army chaplain after two deployments to Afghanistan. He is currently assisting at VA hospitals.

Much like the Founder of the Marian Congregation, St. Stanislaus Papczynski (1631-1701), who served as a chaplain in the Polish army, Fr. Matthew is confident that, when the time comes, he will be ready to endure whatever dangers arise.

“I trust that Our Lord and Our Lady”, he says, “will give me the grace and strength to be a shepherd and serve my flock wherever they are.”

Father Matthew Tomeny, MIC, will celebrate a Mass of Thanksgiving on Tuesday, Dec. 28 at 9 a.m. EST in the National Shrine. 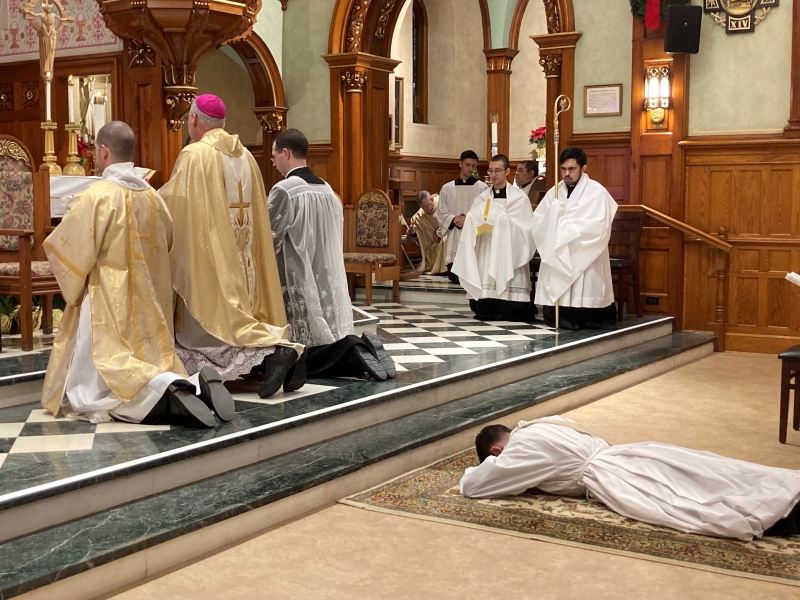 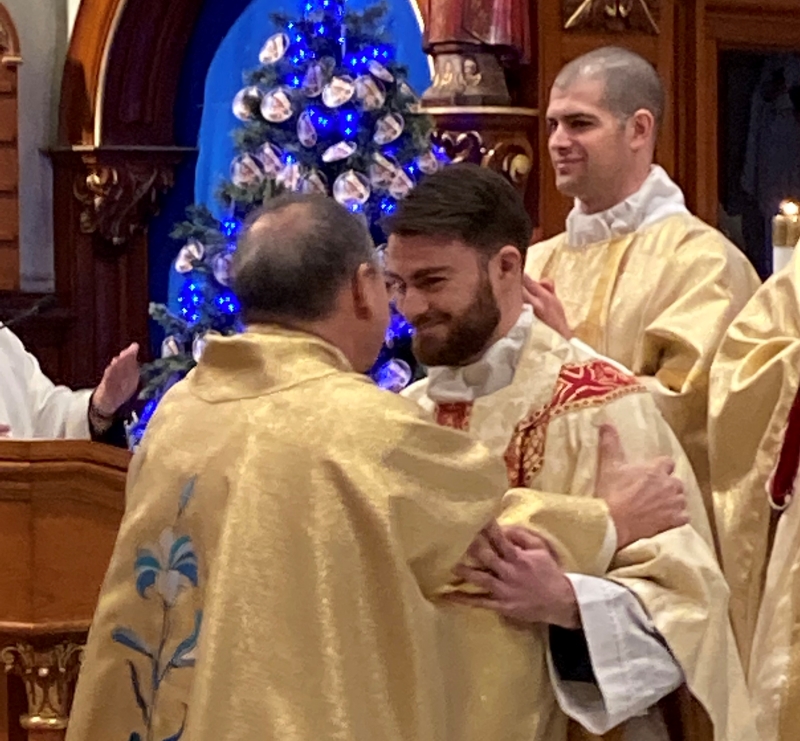