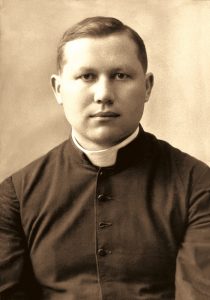 Blessed George Kaszyra was born on April 4, 1904, in a village of Belarus, of Orthodox parents. In 1907, his mother became a Catholic. After the death of his parents, he was brought up by his relatives.

In 1922, he, too, became a Catholic and a year later entered the Marian school at Druja. After a year in school, he sought admission to the Marian Congregation. Upon completing the novitiate, he made his religious vows in 1926. Following graduation in 1929, he studied philosophy in Rome and theology in Vilnius, where he was ordained a priest in 1935.

He was placed in charge of the Marian seminarians in Vilnius for a year. Then, for two more years, he worked in Druja as prefect in the school and educator of the religious students. In 1938, he was appointed Superior of the House of Rasna in Polesie. When the Bolsheviks arrived there in October of 1939, he went to Lithuania.

In July 1942, Fr. George was able to leave Lithuania and go to Druja. From there, on the summons of Fr. Leszczewicz, he went immediately to Rosica, where they conducted the mission together, using Polish, Belarussian, or Russian languages, according to the local need.

During the punitive expedition undertaken by the Nazis for partisan activity in that region, Fr. Kaszyra remained voluntarily with he confined people, fulfilling priestly ministry and saving them from despair. He was burned together with them in Rosica on February 18, 1943.

Blessed George Kaszyra was a humble man, known for his extraordinary industriousness, and well-liked by those who lived with him. An exemplary religious, he was dedicated to the community life. He is a model of good relations with Orthodox believers and of reconciliation between the Catholic and Orthodox Churches. Above all, he is remembered for his martyrdom at Rosica, which will continue to inspire members of the Congregation for years to come.

This courageous Marian was beatified in Warsaw, Poland, by Pope John Paul II on June 13, 1999. Please ask the intercession of Blessed George for your intentions. Please see below for suggested prayers.

(for private devotion only)

Almighty and Eternal God,
You granted the grace of martyrdom
to Your blessed servants, Anthony and George,
who at the moment of danger to their lives
showed a spirit of love and pastoral zeal
by accepting death with their brothers and sisters.
Through their intercession, grant us
the grace of strength and love,
that our daily service to others
may build up the Church and lead us
to the eternal joy of Your saints.
We ask this through Christ our Lord. Amen.