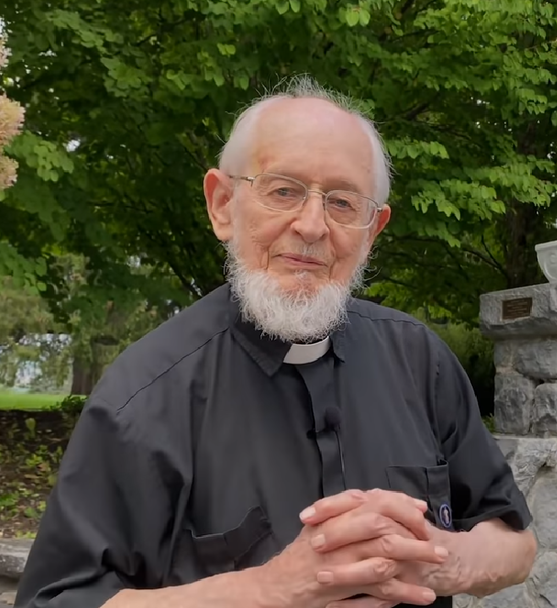 A native of Adams, Massachusetts, 72 years a professed religious and 64 years a priest, Fr. Seraphim is a member of Blessed Virgin Mary, Mother of Mercy Province of the Congregation of Marian Fathers of The Immaculate Conception. With licentiate degrees from the Pontifical University of St. Thomas (The Angelicum) and the Pontifical Institute of Eastern Church Studies (The Oriéntale) in Rome, he lectured for several semesters in the Department of Theology at the Catholic University of America and served in seminary and formation positions for the Marians.

Fr. Seraphim also held various administrative roles in his Province and in the Congregation’s Generalate in Rome, as well as pastoral roles in Eastern Rite parishes in Australia, Ohio, Pennsylvania and Connecticut. Together with Archbishop George Pierce, S.M. and Fr. George Kosicki, CSB, Fr. Seraphim served as a core-memberof the Bethany House of Intercession for Bishops, Priests, and Deacons; a spiritual renewal movement for Catholic clergy in the 1970s, serving priests from all over the world. In 1979, a year after Pope St. Paul VI lifted the banon Sister Faustina’s writings and elements of The Divine Mercy devotions, Fr. Seraphim was called from Bethany House to head The Divine Mercy Department at the Marian Helpers headquarters in Stockbridge, MA. In that position, he wrote a series of articles for the Marian Helpers magazine, and supervised the production of various books, pamphlets, and audio-visual materials dealing with The Divine Mercy Message and Devotion and Sister Faustina’s writings.

Fr. Seraphim served as Vice-Postulator for North America in the Canonization Cause of Sister Maria Faustina Kowalska, an assignment he held for over twenty years.  Fr. Seraphim spent over three years in Rome, making a significant contribution to the successful conclusion of Sister M. Faustina’s beatification and canonization processes.

He was likewise a first-hand witness to Maureen Digan’s and her son’s miraculous healing attributed to Saint M. Faustina’s intercession that opened the way for her Beatification in 1993. He was also a coordinator of the efforts that served to verify not only that miracle but the second as well, which made it possible for Sister M. Faustina to be declared a Saint on Divine Mercy Sunday of the Jubilee Year 2000 as first saint of the New Millennium, “… God’s gift to our time ” (from Pope St. John Paul II’s canonization homily).

Fr. Seraphim served as theological advisor for the award-winning video docu-drama Divine Mercy—No Escape and for the devotional video Sister Faustina: The Promise of Mercy. He also played a significant role in the production and narration of a video released in 1992, Sister Faustina: The Apostle of Divine Mercy. Then, from November 1991 to October 1995, he served as director of the Association of Marian Helpers under the honorary title “Father Joseph.” In this capacity, he supervised the scripting and production of another video. Time for Mercy — released in 1994 by the Marians and produced byDrew Mariniand his company Marian Communications Ltd., which won a First Place Gold Camera Award in international competition for outstanding creativity in the production of Audio-Visual Communications.

While serving as Rector of the Divine Mercy Shrine the United States Conference of Catholic Bishops’ Committee on Divine Worship elevated the Shrine to its National Status.

Fr. Seraphim worked closely with Mother Angelica, who embraced the Divine Mercy message and devotion and spread it far and wide through her EWTN network.

In 2005 he participated in the international symposium in Krakow, Poland, that gave rise to the World Apostolic Congresses of Mercy.  He participated in all four as an active participant and an inspiring speaker.

He assisted in the growth and development of such Apostolates of Divine Mercy as Mother of Mercy Messengers headed by Joan and Dave Moroney, Eucharistic Apostles of Divine Mercy, founded and directed by Dr. Bryan Thatcher (active in over 40 countries), and Healthcare Professionals for Divine Mercy founded by Marie Romagnano and participated in all its 16 conferences.

The Lord in His mercy and love was faithful to Fr. Seraphim and graciously helped him at every stage of his work in the promotion of the Divine Mercy message and devotion.  Fr. Seraphim always relied on the unfathomable mercy and kindness of Our Lord, in whom he trusted completely. And he was never disappointed.

The Lord prepared him for eternal life throughout his whole life, but also provided with the Sacraments of the Church. Before his death Fr. Seraphim received the sacraments of reconciliation, anointing of the sick, and the Eucharistic Jesus the food for the journey 30 minutes before he passed away.  He also received Apostolic Pardon through the Holy Mysteries of Our Redemption for the remission of all sins and release from all punishments in this life and in the life to come.  He passed away peacefully from the complications due to COVID-19 on the feast of Our Lady of Lourdes.  There are two days when Our Lady in the mystery of her Immaculate Conceptions are celebrated: Solemnity of the Immaculate Conception celebrated on December 8 and the Feast of Our Lady of Lourdes. The Immaculate Conception, Patronnes of the Marian Fathers’ Congregation, prepared her special son to enter into the Father’s House on her special Feast. “May the Virgin Mary’s Immaculate Conception be his salvation and protection.“