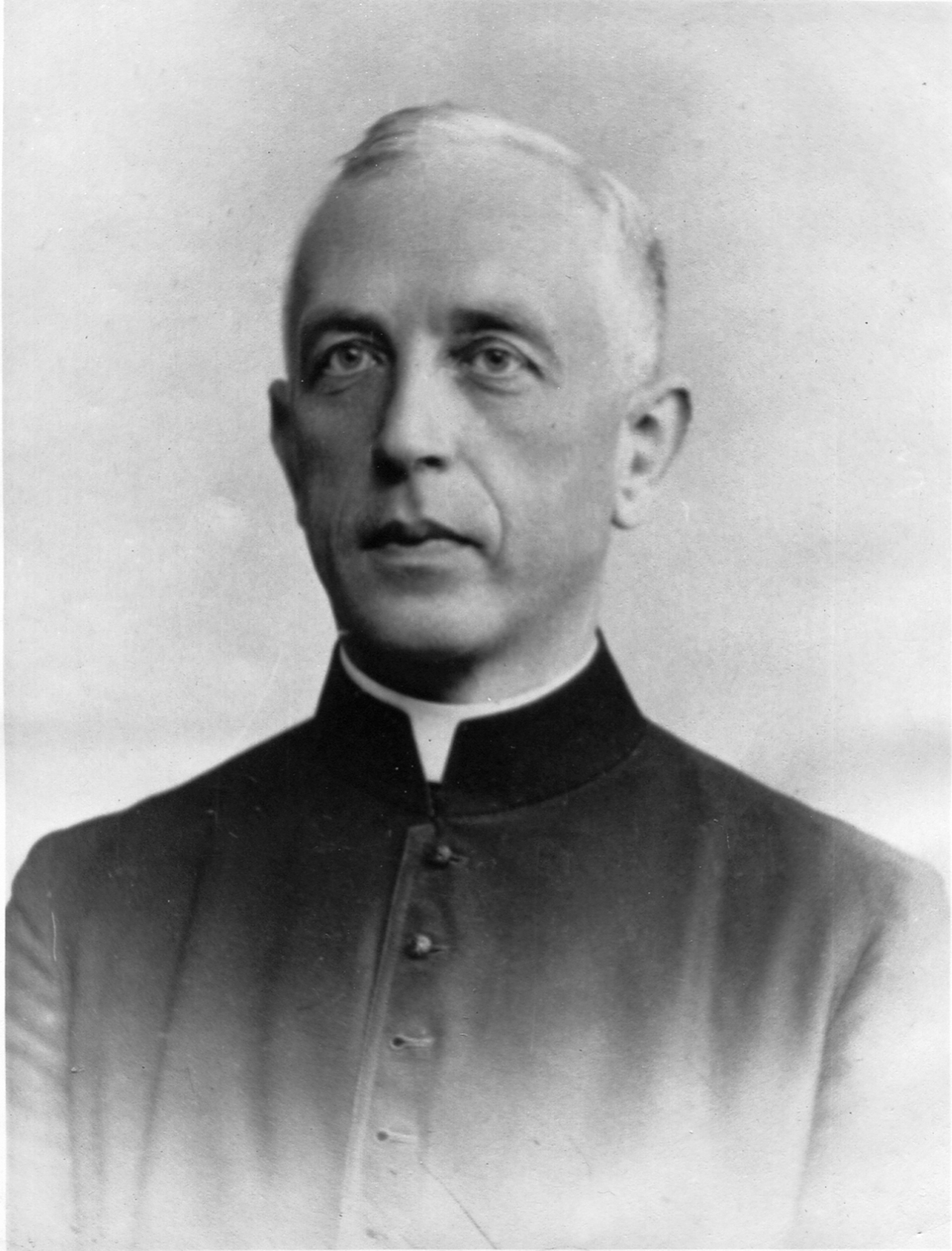 Fr. Eugene was born on March 8, 1891, in Warsaw, Poland. His parents were Wojciech and Franciszka nee Dworakowska. He had two sisters and two brothers, one of whom became a priest in the diocese of Warsaw (1885-1975). Fr. Eugene attended the Chrzanowski Gymnasium (later called the Zamoyski Gymnasium), where Fr. Leon Kulwiec, a Marian, was the prefect. However, he did not complete his high school studies there because his family had to move to Russia during WWI, and he obtained his high school certificate there. After returning to his homeland, he began his studies at the Jagellon University. At first he studied medicine, and then anthropology.

Influenced by Fr. Kulwiec and his university classmate, Bronislaw Zaluski, Eugene joined the Congregation of Marians. Primarily he was an educator of a group of boys who were preparing for the gymnasium and novitiate at the presbytery of Fr. Kazimierz Bronikowski in Pieczyska. Fr. Kulesza was the first novice of the renewed Congregation in Poland . He began his novitiate on November 1, 1915, at Bielany in Warsaw under the direction of Blessed George Matulewicz. Within a month, the following young priests joined him: Wladyslaw Lysik, Zygmunt Troszynski, and Franciszek Krupa; and also Bronislaw Zaluski, a lay student. Kulesza professed his religious vows on November 1, 1916, and then left for Fribourg, Switzerland, where he joined other Marian students. Bishop Matulewicz ordained him to the priesthood on October 2, 1921, at the Marian church in Rasna near Wysokie Litewskie. Afterwards, Fr. Kulesza returned to Fribourg, where he pronounced his perpetual vows on November 1, 1922. When the Marian house in Fribourg closed, Fr. Kulesza found himself in a more difficult situation, although he was then a chaplain for religious sisters. He also survived tuberculosis of the lungs.

After seven years of studies, on January 10, 1924, he passed his examinations and defended his doctoral thesis in the field of the internal life entitled: “La doctrine mystique de Richard de S. Victor.” He had a chance at the time to become a lecturer of philosophy at the seminary in London, but Blessed George did not agree to this because he needed educated priests to work for the Congregation.

Thus, Fr. Kulesza came to Bielany. He was seriously ill, tired, and a little disheartened. In the fall of the same year, he went to Kuznice in Zakopane for treatment of his lungs. But on January 16, 1925, he asked Fr. Matulewicz for permission to go to Switzerland. Blessed George wrote at that time to his vicar in Poland, Fr. Kazimierz Bronikowski: “I am very saddened by Fr. Kulesza’s spirits and attitude […] However, since he is ill, we must provide treatment for him with all our love and sacrifice.” Having received consent and money, Fr. Kulesza left for Switzerland, and afterwards visited Italy and France. He returned in 1926 and worked at Bielany as a school secretary. In 1930, he served as a seventh grade lecturer and educator, as well as a confessor. In 1931, he became the deputy director of the College, and two years later, a confessor and lecturer once again. He began to have doubts about the way in which he was fulfilling his vocation. Finally, he decided to transfer to the Pauline Fathers. He obtained the consent of the Congregation and was accepted. During his vacation in 1935, he went to Jasna Gora. After just a few days, he returned to Bielany, having rid himself of all his doubts forever . In the beginning of 1932, following the demand of the public education authorities, the gymnasium director, Br. Zaluski had to step down from his office. By his letter of March 2, 1936, Fr. Provincial Wladyslaw Mroczek recommended Fr. Eugene Kulesza for this post and on October 22, 1936, named him rector of the College.

When changes within public education authorities came about in Warsaw, and the Belarussian Marians were expelled from Druya, at the end of the summer vacation of 1938 Fr. Kulesza, following Fr. Jarzebowski’s suggestion, declared his wish to take over the office of the director of the gymnasium in Druya. Br. Zaluski was reinstated at his post of the Bielany College’s director, while Fr. Jan Sobczyk became the rector. On August 28, 1938, the Provincial Superior named Fr. Kulesza the Superior of the Marian religious house in Druya. With all his energy and professionalism, he began to fulfill the duties of the director of the King Stefan Batory Gymnasium in Druya. After a year, the curator from Vilnius asked Fr. Kulesza to take over the office of the director at the State-owned gymnasium in Braslaw, some 30 km away from Druya, but the war broke out and all schools were taken over by the Bolshevik authorities at the end of December of 1939.

Fr. Kulesza was acting in defense of priests and the Congregtation of Sisters, the Handmaids of Jesus in the Eucharist, as well as their monasteries. He gave himself entirely to the pastoral work, serving not only in Druya, but also in the nearby churches as well. He spent much time hearing confessions, encouraging frightened priests, and taught them how to defend themselves and about what to be aware. He also organized having parcels sent to people deported into Siberia and Kazakhstan.

When the war broke out between the Germans and the Bolsheviks and the army and officials left Druya at the end of June, lawless chaos settled in. Stores were robbed, people assaulted, and finally the crowd brought about a hanging of a resident who was exceedingly favoring the Bolsheviks. Then wiser people decided to organize a civil committee for order and asked Fr. Kulesza to serve as its president. He first objected and wouldn’t agree, but when they kept pressing him, he agreed to it, after a prayerful consideration. Lawful regulations were established, and a volunteer fire department was organized. Peace and order reigned. But all that caused Fr. Kulesza’s destruction.

On the afternoon of June 30, 1941, several Soviet soldiers crossed the Dzwina River by boat. They approached the monastery, and upon seeing Fr. Kulesza, ordered him to follow. They agreed to allow two additional priests to accompany him. But after crossing the river bank, they sent those two priests back home. The detainee was ordered to get in the car and he was driven toward Polock. When the car broke down, soldiers took Fr. Kulesza to the hut of a Communist, where a Soviet command post was located. After a short while, they led Fr. Kulesza away from the hut and took him to a rye field. There, two soldiers began to beat him on his face with their boots. He fell; when he got up again, they took him to a freshly-dug ditch and the two soldiers shot him in the head. When he fell in the ditch, a third soldier hit him twice on the head with a bayonet. The dying priest instinctively lifted his right hand and covered his eyes with it; in this position, he was covered with earth. This is how his body was discovered.

The Germans entered Druya on July 5, 1941. The next day, Sisters Apolonia Pietkun, Maria Jasinska, and Janina Podolska crossed the Dzwina River and learned from people in Lupanty the details of Fr. Kulesza’s martyrdom and the place of his burial. They dug up the body from the grave, wrapped it in a sheet, and carried it by horse-driven cart to the Dzwina River; many people joined them in this procession. Since it was a Sunday afternoon, many people assembled on the other bank of the river and they met the procession carrying the body, weeping loudly. The Sisters, accompanying the body, considered it as a special honor. From the riverbank, the body of Fr. Kulesza was carried on biers. Men, carrying them, frequently took turns, because everyone wished to have this honor. Fr. Wincenty Smolinski, who came out to receive the martyr’s body, burst into loud sobbing instead of singing, and the earthly remnants, accompanied by great wailing, were taken into the church. The departed was dressed in a red chasuble as a sign of martyrdom. Throughout the following three days, great crowds visited the church and prayed for the deceased near the coffin. The funeral took place on Wednesday, July 8th, with 11 priests and a great multitude of the faithful in attendance. Fr. Kulesza was buried in a stone tomb on the left side of the church. This tomb, which the Communists razed to the ground, was found intact. The parishioners willingly visit it and decorate it with flowers. Local residents bestowed upon the murdered priest their great respect and love, and after his death — great honor.

At the site of Fr. Kulesza’s martyrdom, a farmer prepared a gravesite and placed a cross there. Because this place is near the road, people often stop by and recite a “Hail Mary” and flowers are always there. Many people took with them a bit of earth soaked with the Martyr’s blood, treasuring it as a relic. It has happened many times that when people kissed those relics with devotion and prayer, they were granted favors for which they asked. The Sisters also pleaded to Fr. Kulesza for help and intercession before God when they experienced problems with religious education, and their requests were always answered.

After the return of the Bolsheviks, outward signs of the devotion, particularly those related to the place of martyrdom and burial, had to stop. However, people’s belief in Fr. Kulesza’s martyr death remained, and presently his tomb at the church is embraced with care once again.

By the letter of February 9, 2021 the Vatican Congregation for the Causes of Saints opened the process of the Servant of God Fabian and four companions – one of whom is Fr. Eugeniusz Kulesza, MIC. The official title of the process is: “Varsaviensis Beatificationis seu Declarationis Martyrii Servorum Dei Fabiani Abrantowicz et IV Sociorum, Sacerdotum Congregationis Clericorum Marianorum ab Immaculata Conceptione Beatæ Virginis Mariæ in odium Fidei, uti fertur, interfectorum.”