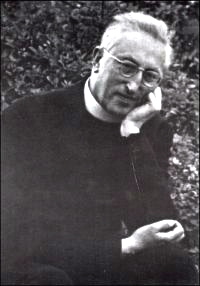 Fr. Joseph Jarzebowski was born in Warsaw, Poland, on November 27, 1897. A patriotic and dynamic youth, he entered the Marian Novitiate in Warsaw-Bielany in 1917 after meeting the Marian Renovator, Fr. George Matulaitis.

Ordained on September 30, 1923, he spent the next 14 years in pastoral and youth ministry at Bielany House. It was while Fr. Joseph worked in Lithuania from 1939 to 1941 that he met Fr. Michael Sopocko and first heard the story of the Divine Mercy Apostolate.

As World War II engulfed Poland with full force, Fr. Jarzebowski came to attribute his own survival to the miraculous power of that devotion. Hunted by Nazi death squads, he escaped from Poland and came to America via Siberia and Japan. He arrived in Washington, D.C., on May 24, 1941, and remained in the USA for two years, working with the Marian communities and promoting the Divine Mercy devotion.

Next, he worked among Polish exiles in Mexico and then in England where he organized schools and cultural programs in Hereford and Fawley Court. He was only 66 years old when he died in 1964. Fr. Joseph’s body was laid to rest in the Marian Cemetery at Fawley Court. He is remembered today in a special way as the man who exported the Divine Mercy Devotion from Poland to the rest of the world.