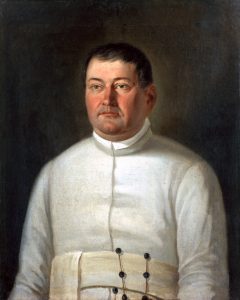 The General chapter in Mariampole, Lithuania, June 9, 1776, elected the 41-year old Fr. Raymond Nowicki to the office of Superior General. For the next 12 years, he governed the order with extraordinary energy, prudence, and skill. By his efforts and guidance the community achieved full independence from the Franciscans.

John (in Religion – Raymond) Nowicki was born on September 2, 1735 in Wysockie Litewskie by Rasna where his father was treasurer for the Matuszewicz estate. He entered the Marians at the house in the Marian Forest on August 31, 1755; he made his profession on September 8, 1756. Unusually gifted intellectually, he easily finished his studies, majoring in theology. For many years he taught both philosophy and theology.

From 1770 to 1773 he was secretary of the Order. He was the first general in the history of the Marians to hold office for 12 consecutive years. His administration accomplished more than any other of the eighteenth century. He brought about reforms which influenced every aspect of the Order.

Being the son of a good accountant, Fr. Raymond inherited from his father organizational skills and a love of order, awareness of his own authority and great courage in making firm decisions. Such authority was already revealed in his first circular letter: “we inform you that by God’s Will we have undertaken to bear you in our heart and shortly we expect to personally greet you with the kiss of peace.” He signed chapter decrees with the full authority of his office as Superior General and Visitator. In a long letter, dated June 8, 1777, he described to the Marians the heavy burden of governing the order, clearly emphasizing that he himself is aware of these responsibilities. From the outset of his administration, he placed great stress on the observance of the vow of poverty, on discipline, on proper training of novices and students for the priesthood. He set in order the General Administration’s archives, he reduced Mass endowments, straightened out long-standing bequests which could not be satisfied, organized a Mission Band, and composed statutes for missionaries.

For the task of freeing the Marians from dependence upon the Franciscans, he selected as General Procurator Fr. Candidus Spourny, who was especially gifted in making contact with people. In this capacity he sent him to Rome. As General, Fr. Nowicki appealed to the Apostolic Nunciature to extend his term of office without the General chapter of elections.

In his circular letter of December 12, 1781, he informed the Marians that in accord with the original constitutions of the Order all the members were to wear a belt over the habit and not the Franciscan cord. This was a clear visible sign of the break with the Franciscans. All that was needed was the official document – later obtained in Rome on September 15, 1786. Fr. Nowicki had thus launched the Marian Order on its own, seeing to it that the community was mature enough to determine its own future.

After 12 years, a new Superior General was elected. Fr. Nowicki was offered the duties of Novice Master in Mariampole. This he eagerly accepted, since he always felt keenly about the training of younger Marians. The Order felt the need of a father at the helm, more than a commander. The absolute and authoritative nature of his government was indeed Providential and very beneficial to the Order: history has judged it as a genuine reform.

A great reformer, yes; but Fr. Nowicki was also an exceptionally intelligent and saintly religious. He relinquished the office of General at the right time, sensing the need of the Marian community. This facet of his character even more enhanced his greatness and later was to merit a place among the most revered Marians.

In 1801, he suffered a heart attack which left him paralyzed. After five years, he died on April 6, in Mariampole.