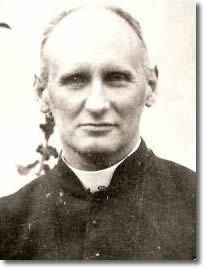 Fr. Sigmund Troszynski was born in Ruda of Marymont on December 4, 1886. He was ordained in 1913 and entered the Marian Novitiate in Warsaw-Bielany two years later. Beginning in 1927, he took up residence near a church in Marymont, on Gdansk Street in Warsaw. There his ministry focused more and more on help for the area’s poorest people.

World War II found Fr. Sigmund actively involved in the Polish resistance and in providing support to the Jews and rescuing them from the Holocaust. During the Warsaw uprising in 1944, he was chaplain to the Polish Resistance Home Army, achieving the rank of Colonel. Near the close of the Uprising, he was wounded while trying to provide medical as well as spiritual help to the insurgent soldiers.

By January 19, 1945, Fr. Sigmund was back in Warsaw-Marymont where he immediately resumed his ministry among the city’s poor. His ministry with Poland’s people conflicted with the aims of the then-communist government. On January 17, 1949, he was sentenced to six years’ imprisonment. Fr. Sigmund was not released until 1957, when he returned to the Bielany Monastery.

In 1958, he began a new ministry, serving as a chaplain for women religious. On June 22, 1965, at 78 years of age, Fr. Sigmund died. His community laid him to rest in the Wawrzyszew Marian Cemetery in Warsaw.