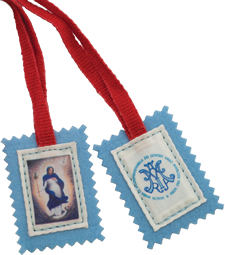 In our highly pictorial society, wearing the Blue Scapular communicates that we have chosen to assume a special devotion to Our Lady. It is a sign of trust that Mary Immaculate, whom we love and whom we want to serve, accepts our devotion and enfolds us in her mantle of protection.

The Blue Scapular signifies our consecration to her service, our assuming certain obligations in her service, and the Church’s blessing — along with our desire to receive certain graces. Thus, it becomes a shield against infernal temptations as well as a symbol that we have put on the “new person” in Christ through Mary.

The scapular’s origins
All of this rich imagery and the spiritual reality that it signifies had its origins many centuries ago in a garment called a scapula — meaning an arm, shoulder, and back. It consisted of two rectangular pieces of material, without sleeves, and was worn over the habit of a monk or nun.

Then, in the Middle Ages, the scapular was modified for use by lay people as an outward sign of their participation in the spiritual life of a particular religious order. Many times, such an association with an order was called a confraternity, and the sign of acceptance into these sorts of spiritual communities was when a priest of the order invested a lay person with the scapular.

Today there are a number of scapulars which are recognized by the Church, and many of them are associated in some way with Our Lady and religious communities dedicated to her. The Blue Scapular — which the Marians of the Immaculate Conception have the privilege of promoting — became connected with the Marians through an order called the Theatine Fathers.

The Marians and the Blue Scapular
The Marians began to wear the scapular under their habit shortly after their founding in the late 1600s. They were then granted the privilege of propagating this devotion among the lay faithful and of establishing scapular confraternities. The Marians of old recognized that they were obliged by their very vocation to spread devotion to the Immaculate Conception of the Blessed Mother.

Finally, on July 3, 1992, Fr. Donald Petraitis, MIC — my predecessor as Superior General — obtained for himself and his successors a perpetual permission from the Superior General of the Theatine Fathers to bless and confer the scapular.

Connected with this privilege is the right to grant a plenary indulgence at the hour of death to the faithful who wear the scapular. The permission authorizes the General Superiors of the Marians to delegate other priests (or deacons) to bless and confer the Blue Scapular.

Thus — according to our tradition of more than three centuries — we Marians have been promoting the wearing of the scapular as one of the forms of devotion to the Immaculate Conception of the Blessed Virgin Mary.

The scapular’s meaning
The scapular has profound significance for all of the faithful. Its mystical meaning refers to the protective mantle of the Blessed Virgin Mary. This meaning is indicated in many prayers to Our Lady. The oldest version of the Third Century prayer, “Under Your Protection,” for example, contains the words: “Under the mantle of your mercy … .”

Mystically, it is possible to consider the scapular as a piece of Mary’s mantle, received from her hands and ensuring her protection to those who wear it.

Under her protection, special gifts and assistance in life are promised to those who piously wear her scapular and exhibit the proper disposition of heart. This disposition is an aid to salvation, since wearing the scapular endows one with many graces promised by the Blessed Mother and granted by the Church.

A sign God and Mary see
We might erroneously conclude that the scapular has lost some of its significance since it is now worn under the devotee’s clothing. We need to remember, though, that it is God and Mary — not the people — who see it and rejoice in it. Wearing the scapular under one’s clothing is a practice in the spirit of Jesus’ command: “But when you pray, go to your room and shut the door, and pray to your Father who is in secret; and your Father who sees in secret will reward you” (Mt 6:6).

The “hidden” scapular is no longer a sign for the people, but a sign for God, for the Blessed Mother, and for those who wear it.

As with the rosary, the scapular is intended as a sign of our conversion, unity with God, and daily striving for holiness.

The Blue Scapular serves as an inspiring, perpetual reminder to each of us that under the mantle of our Blessed Mother, we will find the spiritual protection which we so earnestly seek.

Fr. Adam Boniecki, MIC, was Superior General of the Marians of the Immaculate Conception from 1993 – 1999. An accomplished journalist, Fr. Adam has published many articles and served as the first editor of the Polish edition of “L’Osservatore Romano.”