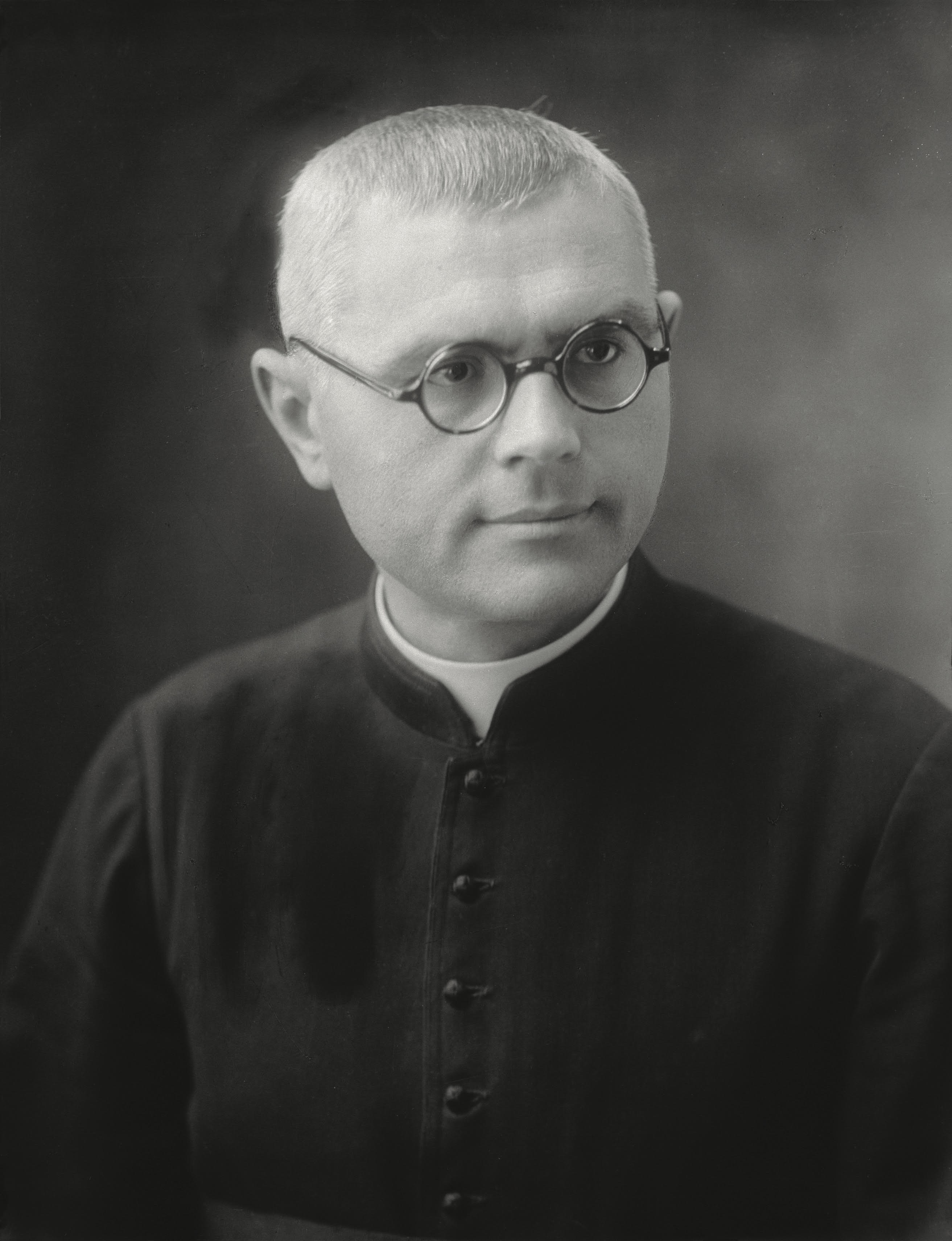 Fr. Andrew was born on December 5, 1891 in Tupalszki district near Oszmiana in the Lithuania Vilnius province, of Michael and Rozalia Cikoto. He was baptized on December 15, 1891. He attended the gymnasium in Oszmiana. Between 1909-1913, he completed his seminary studies in Vilnius. Subsequently, he studied at the Theological Academy in St. Petersburg, where he was ordained to the priesthood by Archbishop Wincenty Kluczyński on June 13, 1914. He graduated from the Academy in 1917, with a degree in Theology. For two years he served as the pastor of the Molodeczno parish, where he opened a Polish elementary school. In February of 1919, he requested Bishop Matulewicz’s permission to leave the parish and go to Minsk to join the staff at the newly opened seminary of the Minsk Diocese under Bishop Zygmunt Lozinski. Bl. George Matulewicz granted his permission and Fr. Cikoto took over the office of the seminary procurator and teacher of fundamental and dogmatic theology.

When the Bolsheviks moved the seminary away from Minsk, Fr. Cikoto contacted Bishop Matulewicz again. Blessed George saw an urgent necessity for establishing monasteries in the Vilnius diocese in order to make it easier for the Belorussian youth to live their Christian life. To complete this plan, he chose two people: Fr. Cikoto and Fr. Abrantowicz, former rector of the seminary of the Minsk Diocese. Bishop Matulewicz planned to found a religious congregation of women for Belarussian candidates as well as a Belarussian branch of the Congregation of Marians.

Father Cikoto entered the novitiate on September 1, 1920, in Mariampole, Lithuania, and completed it under the direction of Fr. Justyn Novickas. He made his first vows on September 24, 1921. Blessed George, who was then the Superior General of the Congregation, sent him to the Lithuanian Marians in the United States to conduct retreats and parish missions for Lithuanian, Polish, and Belarussian immigrants. Possible donations were to go towards the foundation of a new Marian religious house, especially having in mind the Belarussians in Druya.

After his return from America in August of 1923, Fr. Cikoto went to Druya and served as vicar to the pastor, Fr. Antoni Zienkiewicz. In accord with Bishop Matulewicz’s orders he supervised the organization of the Congregation of the Sisters Handmaids of Jesus in the Eucharist and began renovations on facilities for future Belarussian Marians. Father Cikoto started the preliminary courses for Belarussian youth wishing to enter the local gymnasium, which he shortly after transformed into the King Stefan Batory Polish Gymnasium. When Fr. Zienkiewicz was transferred to Głębokie, Father Cikoto became pastor in Druya while completing the repair works on the church and monastery. On September 20, 1924, he made his perpetual vows before Blessed George in the private chapel of the Bishop in Vilnius. The Marian novitiate was opened in Druya in 1925. On May 18, 1925, Fr. Andrzej became the monastery superior and Novice Master. He was much concerned with the cultural and economic development of the region. He supervised the complete electrification of the town, established a mutual support fund, and made sure that middlemen would not exploit the local farmers. He worked in Druya for 10 years: from 1923 to 1933.

In summer of 1933, Fr. Cikoto went to the General Chapter in Rome, where he was elected the Superior General. Significant development of the Congregation came about during his six-year term in office. He continued to embrace with special care the monastery in Druya. He did not have time to complete the adaptation of the Constitutions of the Sisters Handmaids of Jesus in the Eucharist to Canon Law. However, he did it later, in August and September of 1936, when he was not able to walk because a dog had bitten his leg.

In February 21 – March 13, 1937, Fr. Cikoto conducted a visitation of the Marian House in Harbin. As a result of this visitation, a novitiate in the Eastern Rite was opened on October 11, 1937. When Fr. Cikoto’s term of office as Superior General was over and the General Chapter elected Bishop Peter Francis Buczys in his place, he stayed in Rome for a while to meet with the Archmandrite Fabian Abrantowicz, who was returning from Harbin to Poland. When the news reached Rome about the Archmandrite disappearing near Lviv and undoubtedly falling into the hands of the Bolsheviks, the new Pope, Pius XII, appointed in his place as exarch and Apostolic Administrator for Catholics of the Eastern Rite in Manchuria, Archmandrite Cikoto. He then switched over to the Eastern Rite and left for Harbin to continue the work previously conducted by Fr. Abrantowicz. At that time the missionary community in Harbin included four priests and two Marian brothers as well as two diocesan priests: one of which was Russian and the other French. All three schools were still open: one – of the Marians, one – of the Franciscan Sisters, and the third – of the Sisters of St. Ursula. Father Cikoto celebrated the Eucharist twice a week at the Sisters’ schools and taught Apologetics to the youth in such a way that was easy to understand. He was respected and well liked because he was just, kind, and humble. For a long time, he tried not to make any drastic changes, he always sought other people’s advice, and made meticulous preparations for devotions. His speeches earned the Marians many friends and produced favorable dispositions of the Orthodox faithful. Even the People’s Army generals sent their children to those schools.

On December 22, 1948, the Chinese militia surrounded the Marian mission. All the priests were gathered in the office of Fr. Director Cikoto and arrested. They were summarily taken away without being able to get properly dressed for the weather. The following priests were arrested: A. Cikoto, Józef Hermanowicz, Tomasz Podziawo, Paweł Chaleil, Paweł Portniagin, and two lay instructors – Viktor Vłasov and Piotr Marchyshchyn. After being held the whole night in the local prison, on December 25th they were transported by train to the Soviet border and handed over to the NKVD (People’s Commisariat of Internal Affairs). They were imprisoned in a Siberian town of Chita on December 27th.

The interrogations began in January of 1949. Like everybody from the Harbin group, Father Cikoto was kept in a separate cell. They were taken for interrogations mainly during the daytime, but also at night. Such an interrogation would usually go on for several hours without breaks for food or rest. We do not know any details of Fr. Andrzej Cikoto’s inquest. The investigating magistrate would usually address the detained violently, rudely, and humiliatingly. The prisoner had to dispute what went on record: he had to demand that his true deposition be recorded rather than the things that the magistrate wanted him to say. These fights over the deposition contents were frequent, difficult, and dangerous. When dealing with imprisoned clergy, the investigating magistrate tried to make them deny their faith and to write statements negating it. The inquest also had as its goal to collapse and devastate the prisoner morally and physically. During the entire duration of inquest Fr. Andrzej was kept in solitary confinement. Once, after an especially long time, the magistrate ordered another prisoner to be brought in while he was interrogating Fr. Andrzej. The other man was also a priest who suffered a nervous breakdown. He began to say that there was no God, that the magistrate knew their thoughts, etc. Father Cikoto said to him: “What are you saying man? Come back to your senses.” The man shuddered, reflected for a moment, and then jumped off his seat and recited the Credo. In that very moment his illness ceased. On other confrontations Fr. Andrzej’s former subordinates noticed with shock how much the inquest ruined him physically.

The inquest continued until May of 1949. Just like the other priests, so also Fr. Cikoto was accused of organizing a terrorist group at St. Nicholas high school in Harbin, of anti-Soviet Union propaganda, and spying for the Vatican. No court trial was held either at the Chita prison, nor anywhere else. On September 28, 1949, they were sentenced in absentia by the NKVD’s “threesome” in Moscow for 25 years of forced labor in camps. Upon receiving this decision, in November of 1949, they were transported to Angarlag via Irkutsk, stopping first at Tayshet, from where on January 19, 1950, Fr. Cikoto was taken to a camp in Chuksha. From April of 1951 he stayed at the camp of Novo-Chunka, Irkutsk province, Shitkinkiy region, P.O. Box 215/2-040. In June of 1951, he returned to Tayshet.

Father Cikoto never recovered after suffering a physical breakdown in the Chita prison; his health steadily declined. He had heart and liver diseases, rheumatism, and chronic inflammation of the leg veins. He suffered a great deal and was almost continually staying in the camp’s medical ward. During short periods of his relatively good health, he was assigned some minor jobs within the campgrounds. He did not suffer from starvation — thanks to food parcels sent by Mother Apolonia Pietkun, Superior General of the Sisters Handmaids of Jesus in Eucharist from Druya. The Sisters also made it possible for him to celebrate the Holy Mass by sending hosts or breads baked according to his directions, as well as raisins and even small boxes for storing the Eucharist for the others, particularly, the sick. When Fr. Cikoto stayed at the hospital, he would celebrate a Mass daily, thus he always distributed Communion among the sick, who beforehand made a confession. He was a “chaplain” send to them by Christ. We know of two hospitals where Fr. Cikoto stayed: at the camp 0,11 and camp 0,38, hospital “Ozerstoje”. Festering sores that covered particularly his legs, made staying near him unbearable. Father Cikoto passed away on February 13, 1952, in “Ozerstroje” and was buried on the hospital cemetery.

Being set free from the camp, Fr. Paul Chaleil returned to France where he published his memoirs. He mentioned that he met a young man in the camp who used to be a Communist agitator and provocateur, but whom Fr. Cikoto converted and baptized. Father Cikoto asked this man to let Fr. Chaleil know that the NKWD has sent one of their generals to him with a proposal to accept the office of the Metropolitan of Minsk under the authority of the Moscow Patriarch. Father Cikoto asked them to be allowed to die in peace. Because of this they left him alone — forbidding any medical help. He was hospitalized after many demands from his fellow prisoners. He died at the hospital. However, this information was obtained from unverified source.

By the letter of February 9, 2021 the Vatican Congregation for the Causes of Saints opened the process of the Servant of God Fabian and four companions – one of whom is Archimandrite Andrzej Cikoto, MIC. The official title of the process is: “Varsaviensis Beatificationis seu Declarationis Martyrii Servorum Dei Fabiani Abrantowicz et IV Sociorum, Sacerdotum Congregationis Clericorum Marianorum ab Immaculata Conceptione Beatæ Virginis Mariæ in odium Fidei, uti fertur, interfectorum.”