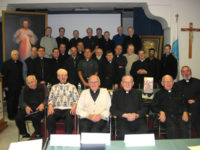 Photo by Fr. I. Chodakowski, MIC

He will reside at the Provincial headquarters in Stockbridge, Massachusetts.

Most recently, Fr. Garrow served as Director of Formation and House Superior at the Marian Scholasticate in Washington, DC. Before that, he served as the Marians’ Superior General in Rome.

As Superior General from 1999 to 2005, Fr. Garrow oversaw the Marians’ worldwide Congregation and served as its top representative to the Holy See. Since his ordination in 1984, Fr. Garrow has been known for his zeal to fulfill his Congregation’s mission to spread devotion to Our Lady, be a witness to Christ’s mercy, and serve the Church in a variety of ministries.

“It’s a torn world, and I think we Marians offer an antidote,” Fr. Garrow says. “We are called to point to the wonderful destiny that God holds out and invites all people to be a part of.”

Father Władysław Zdaniukiewicz, MIC, the oldest member of the Polish Province of the Congregation of Marian Fathers passed away in the evening of May 25, 2020, at the St. Stanislaus Hospice in Licheń, Poland