His Holiness, Pope Benedict XVI
spiritually participates in the Te Deum of thanksgivings of
Father Jan Mikolaj Rokosz,
Superior General of the Congregation of Marian Fathers of
the Immaculate Conception of the Most Blessed Virgin Mary,

who is celebrating his Golden Anniversary of Birth on December 2, 2008.

Archbishop Fernando Filoni
Substitute of the Secretary of State

The original Papal Blessing, in Polish: 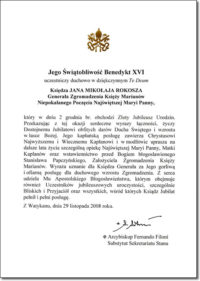 How eloquent are the words from the Book of Revelation...

Father Seraphim Michalenko, MIC, the world-renowned expert on the life and spirituality of St. Faustina — the man who smuggled photographic images of the pages of St. Faustina’s Diary out of Communist-occupied Poland in the 1970s and later documented her beatification and canonization miracles — died Thursday, Feb. 11, from illness related to COVID-19.