The Marian Fathers of the Immaculate Conception welcomed four new members into the Congregation during a Mass celebrating the Solemnity of the Assumption of the Blessed Virgin Mary on Saturday, Aug. 15. Eight Marian brothers also renewed their vows.

Esteban Ybarra, David Blasland, Matthew Holladay, and John Luth made their first profession of vows in the National Shrine of The Divine Mercy on Eden Hill in Stockbridge, Mass. They did so before their Provincial Superior the Very Rev. Fr. Dan Cambra, MIC, their fellow Marians, plus family, friends, and well-wishers.

During his homily, Fr. Dan told the four that to be brothers in Christ as members of the Marian family “means the same as in any family. There will be times full of joy and love, and there will be moments when you ask, ‘Why did God stick me among these people?'” Nonetheless, as a Marian, “you will be bound together by a sense of love as we nurture each other in our efforts to grow in holiness.”

One by one, Esteban, David, Matthew, and John were called by name. They in turn knelt before their superior, placed their right hands on a jewel-encrusted, gold-covered bible, and professed religious vows for the first time. They solemnly pledged to be true to the Marian constitutions as they willfully assumed the responsibilities and sacrifices summed up by the three classic virtues of chastity, poverty, and obedience.

Following Novice Master, Fr. Mark Baron, MIC, they immediately processed out of the Shrine to the sacristy, where — as freshly minted Marians — they changed from white shirts and black ties to their clerical collars.

Asked what their thoughts were as they donned the collars, Matthew said with a beaming smile, “God is good.”

Members of an Eternal Family

The four processed back into the Shrine, where they were individually presented with blue scapulars that all Marians wear. The words of Fr. Dan’s homily seemed to echo within the Shrine as each man took the scapular and kissed the Bible.

“You have a family of Marians [that will be] part of your life for all eternity,” Fr. Dan said. “Learn to love one another. Your call to holiness is identical to the call to holiness of the Blessed Virgin Mary. You are called to be transparently holy. Will you hit perfection? No. But, as it is true for all of us — not just Marians but those called by their baptismal vows — that will be your goal.”

The eight stood in their cassocks in a line that, for its straightness, might have been drawn by an architect. Each man came forward, knelt before Fr. Dan, professed vows, and kissed the bible.

To Each, a Vocation

God calls each of us to a personal vocation, and yet the calling of each of us becomes inextricably tied to those of the people around us. That is why Fr. Dan, in his homily, talked about sainthood. That’s where these young men are bound.

At a luncheon reception at the Marian residence, the Marian community, along with friends and families of the newly professed, enjoyed delicious food prepared by the Oblate Sisters, whose convent is on Eden Hill.

“I didn’t cry at my two sons’ weddings, but I cried for David,” said Angela Blasland, David’s mother. “It was beautiful.”

Noting his son’s full beard, David’s father, Warren, joked, “At first, I thought he had become a rabbi!”

Bill Dunn, a permanent deacon at the Marian parish in Plano, Ill., who read the Gospel during Mass, called the ceremony “awe inspiring for me” and all who were there.

The feast of Mary’s Assumption into heaven provided the perfect day for such awe, a sense conveyed in reverent circumstance and liturgical pomp in which all lips did speak of her, who carried that Love within her womb, destined as He was for the salvation of souls.

Congratulations, Br. John, Br. Esteban, Br. Matthew, and Br. David. You are now entitled “Brother” and can add “MIC” after your title and name. 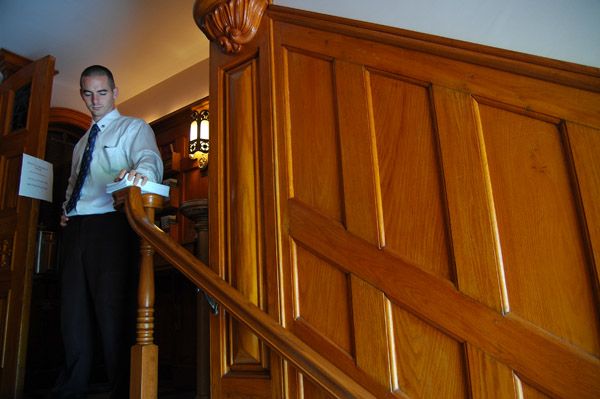 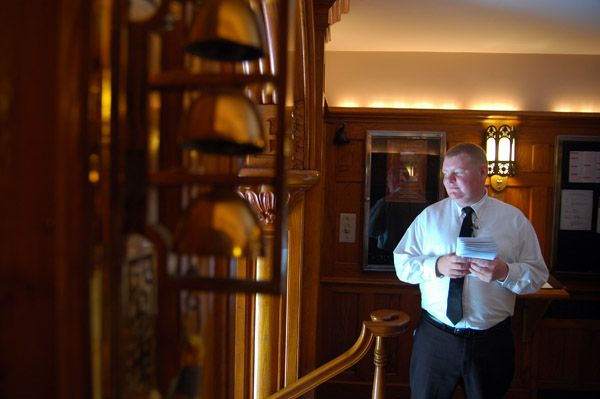 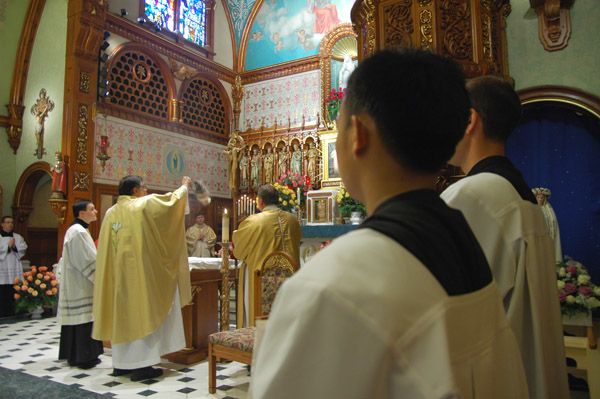 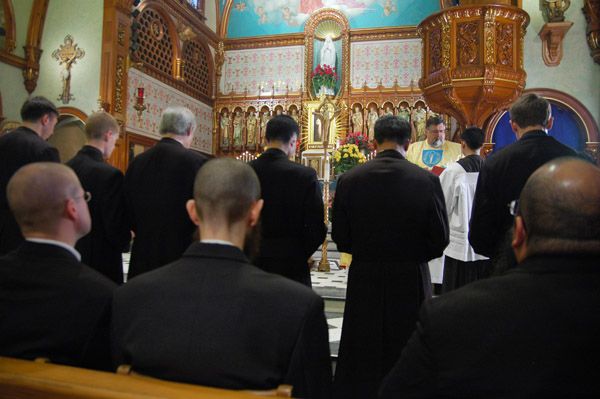 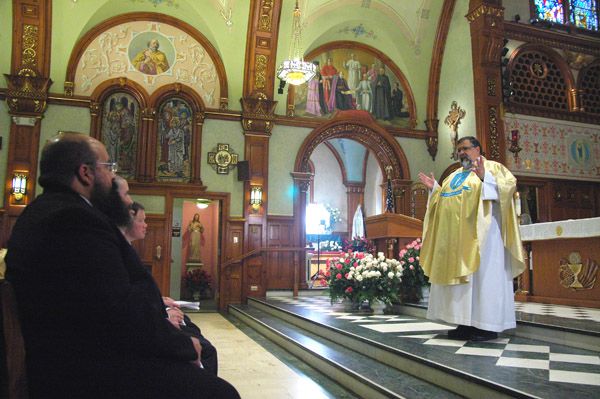 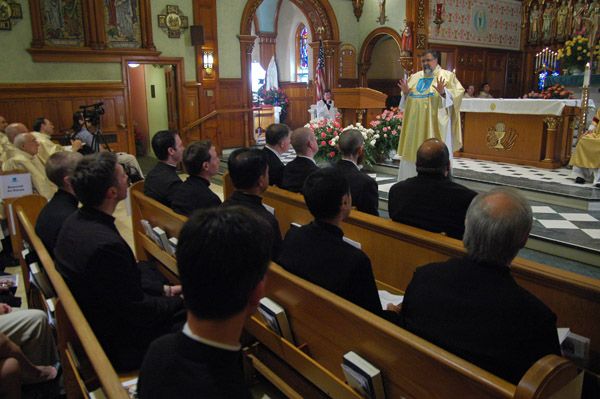 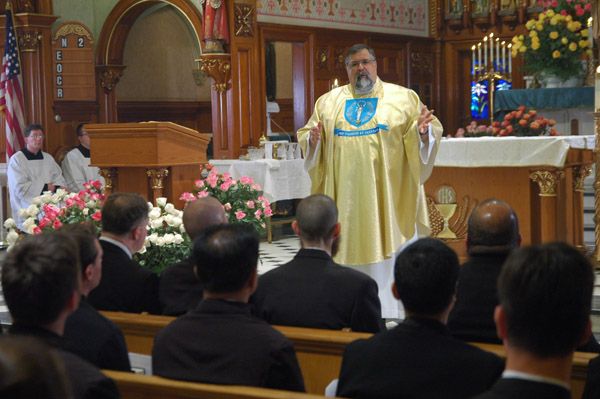 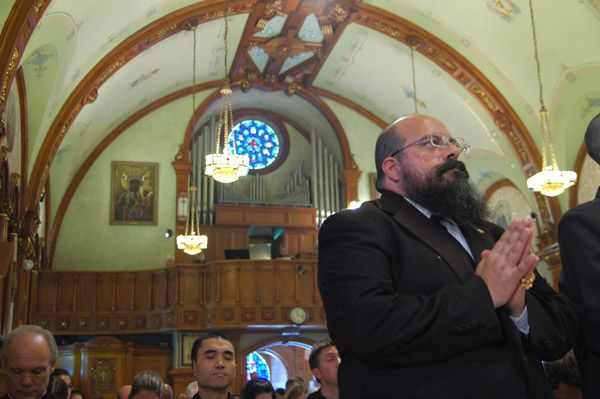 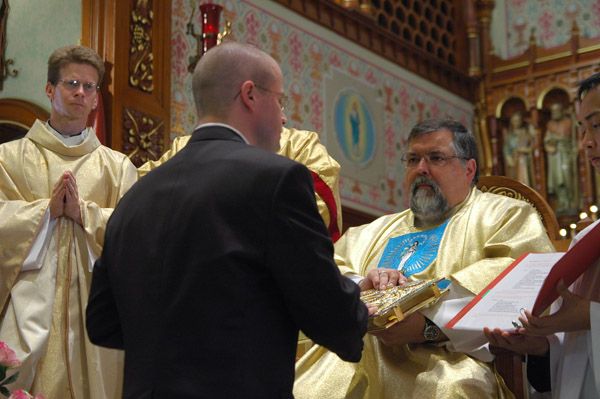 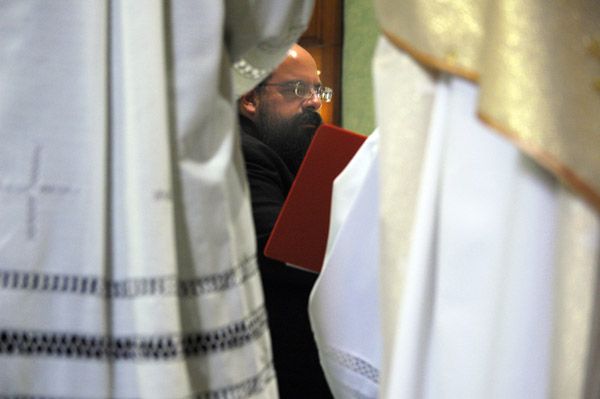 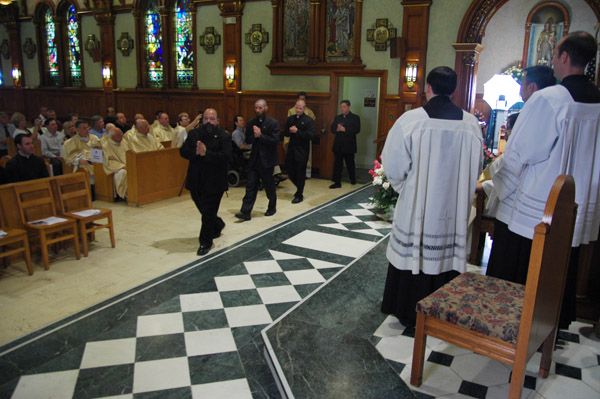 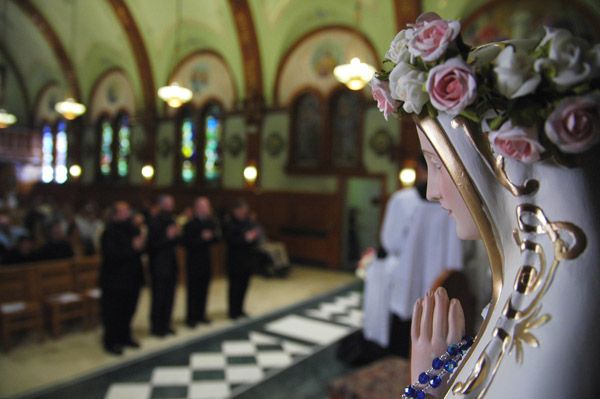 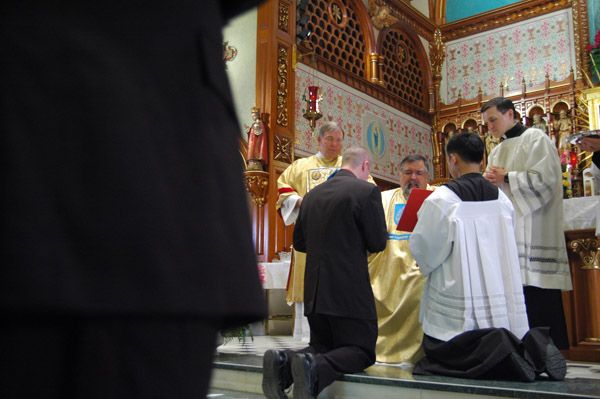 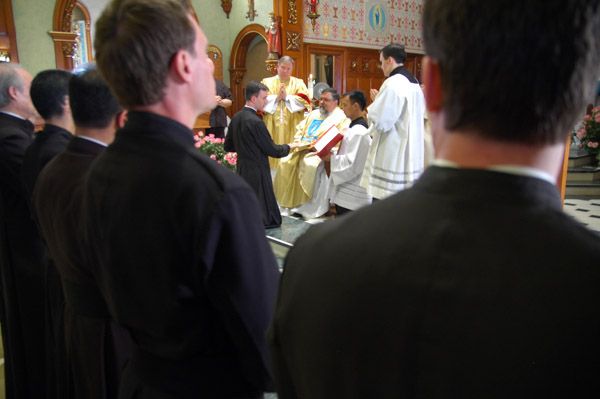 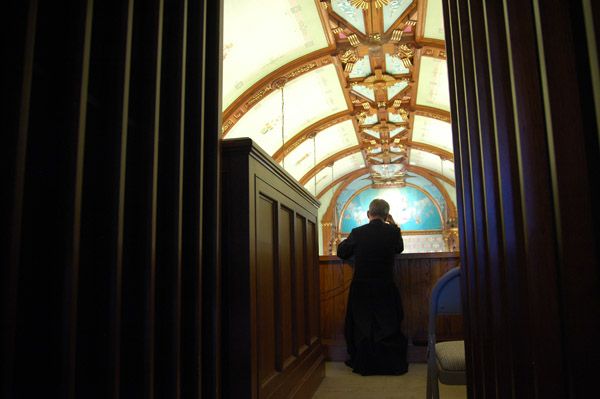 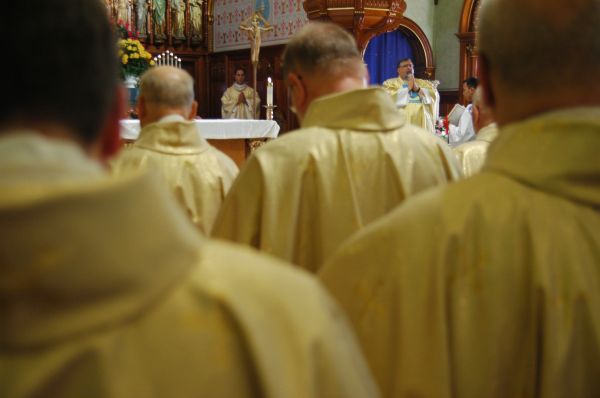 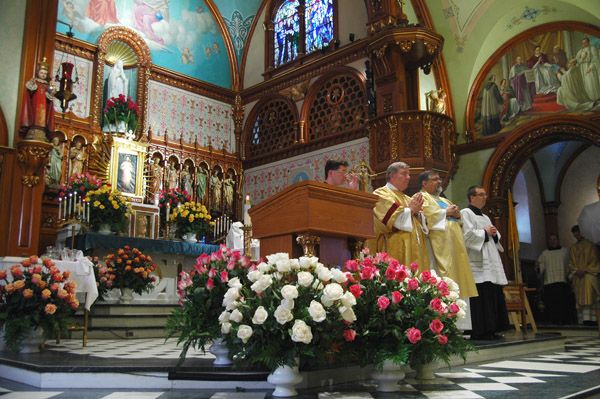 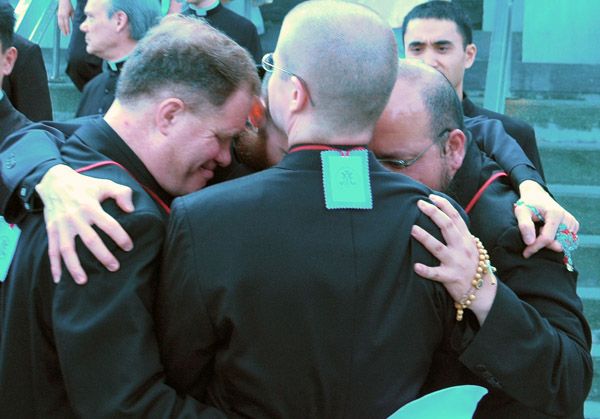 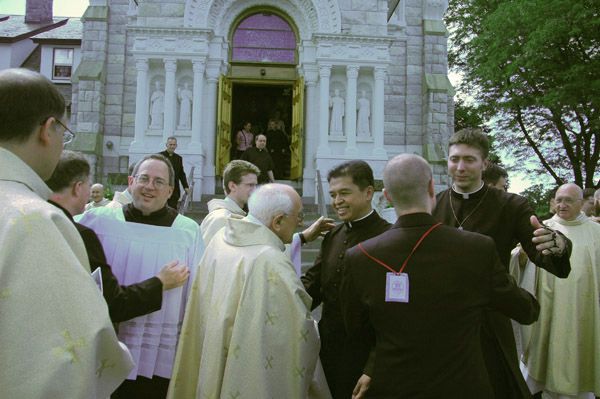 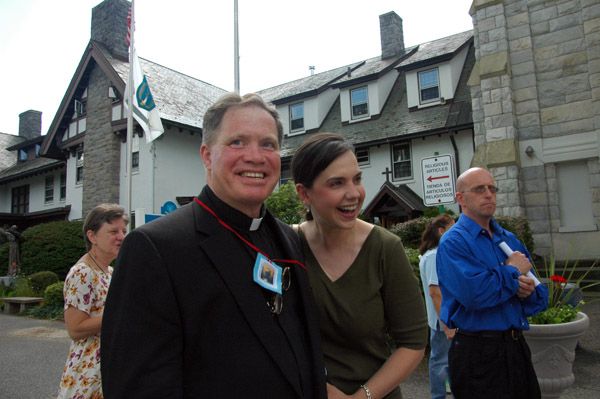 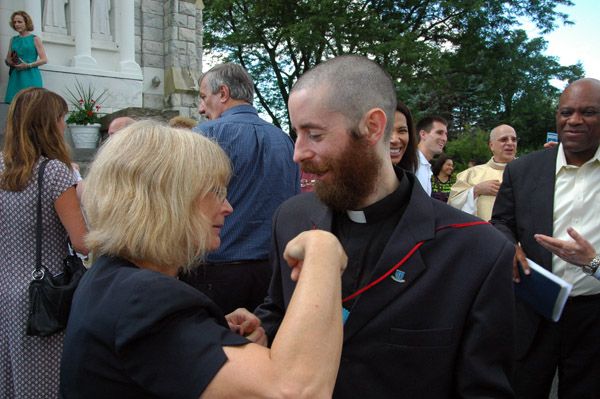 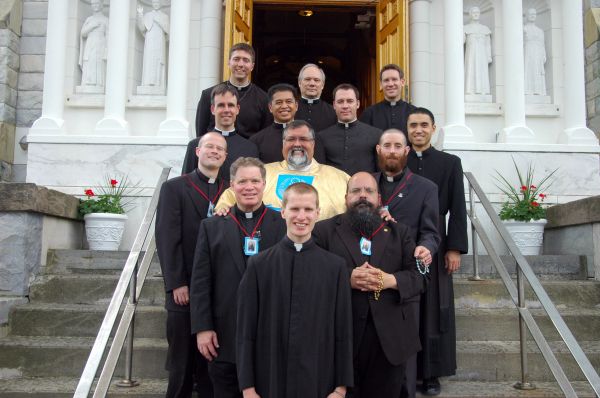 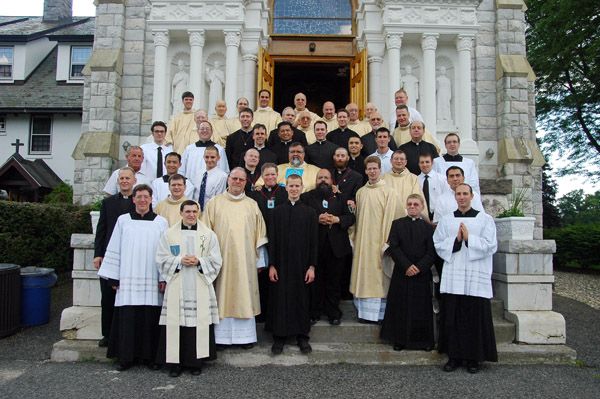 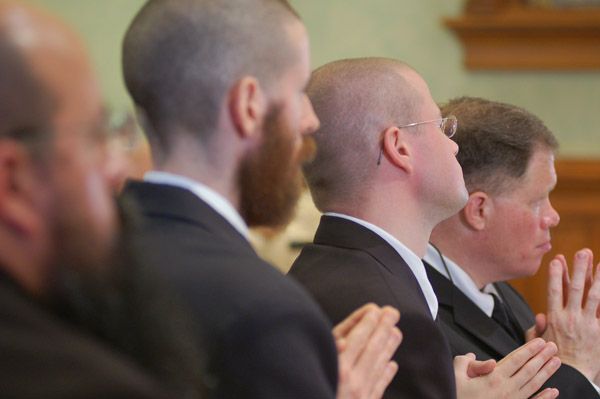 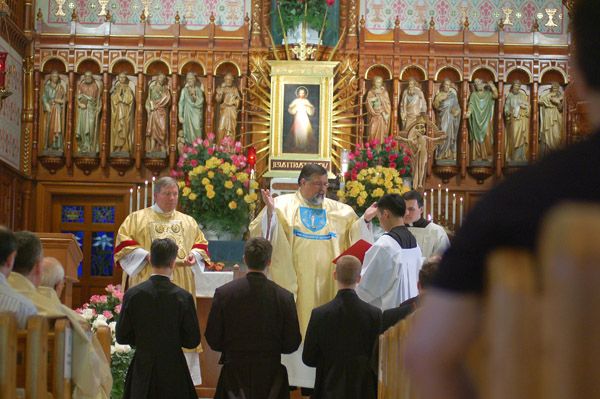 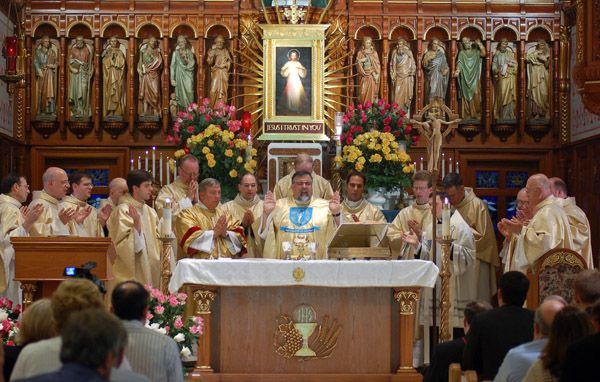 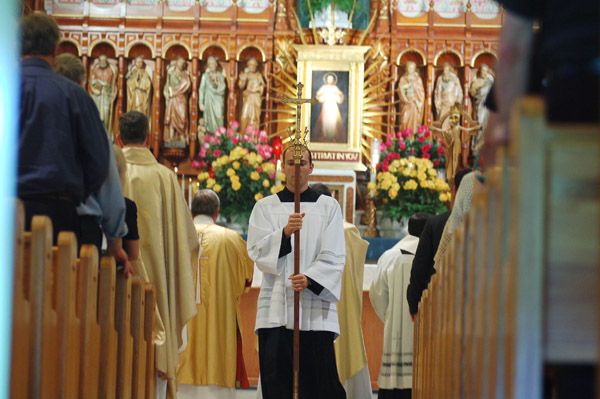 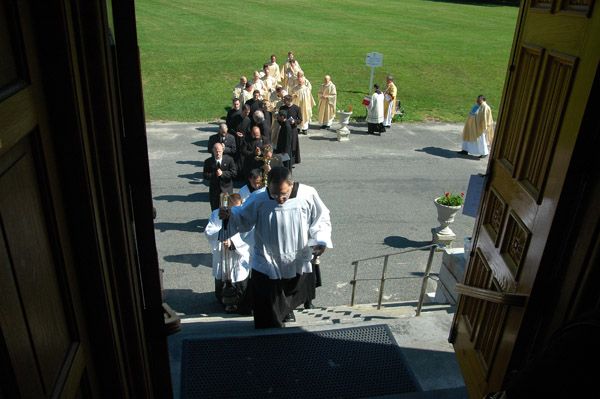