Brother Michael Gaitley, MIC, professed his final vows as a Marian of the Immaculate Conception on the Feast of St. Joseph, March 19, 2010, at the National Shrine of The Divine Mercy, Eden Hill, Stockbridge, Mass.

Approximately 30 of his Marian brothers attended the 10:30 a.m. ceremony, as did a couple dozen of Br. Michael’s family and friends.

One of those friends was Br. Chris Coyne, SOLT, a seminarian with the Society of Our Lady of the Most Holy Trinity, a religious order based in Corpus Christi, Texas. Brother Chris said he first met Br. Michael four years ago, on a retreat to Eden Hill.

“I met him at a crucial time in my life,” Br. Chris said. “I was trying to figure out my spiritual direction. I identified with him. We were both wrestling with the call to sacrifice our lives to become priests. I felt an immediate kinship with him. I came to Eden Hill to throw myself into the hands of the merciful God. God came to me in the form of Br. Michael.”

Brother Chris continued: “I looked upon him as an example, as a leader. He was someone I wanted to imitate. I wanted to ‘be like Mike.'” Proof of what Michael Gaitley means to Chris Coyne was Br. Chris’s presence, having made the long trip in from Texas.

As Only a Mom Could Know

Beside Br. Michael himself, the only person who could be more affected by his profession of final vows went through a number of tissues during the Mass and vows. How many tissues? Linda, Br. Michel’s mother, lost count.

Linda, from Cypress, Calif., said that emotionally, the “biggest impact” on her came when her son prostrated himself face down, arms spread out in the crucified position, in front of the altar.

“At that moment, I had a glimpse of what Mary must have been feeling at the foot of the cross,” Linda said. “I could see the wounds in his outstretched hands, poverty on the left and chastity on the right. When I looked at his feet, I wondered, ‘Where will they carry him.'” For a mother, love composes such a question’s core, with concern in the form of intimate worry making up the skin.

The motif of “running” played an important part in Br. Michael’s long vocational journey. After the ceremony and prior to the lunch held in his honor, Br. Michael said in an interview that when was 5-years old, something happened that left him with an indelible memory.

“I was watching the movie, ‘Chariots of Fire,'” Br. Michael said. “When Eric Liddell says, ‘I want to run for God,’ I wondered, ‘Can I run for God, too?’ For some reason, I never forgot that moment.”

His mother remembers the incident this way: “At that part in the film, he turned to me and asked, ‘Is that true?’ I replied, ‘Yes, honey, it’s true.’ He then said, ‘That’s what I want to do when I grow up! I want to run for God!'”

Linda shared another childhood incident from about the same time. She had learned of a new mother who was in danger of dying. Linda asked her three children to pray for the mother. A couple days later, Linda learned of the woman’s death. When she broke the sad news to her children, Michael said, “We need to pray for the father.”

Think about that for a moment. He was 5-years old, with that kind of insight and compassion.

Asked for his thoughts immediately after the vows, Br. Michael, author of the new book Consoling the Heart of Jesus: A Do-It-Yourself Retreat (Marian Press) said he wanted “to put in a shameless plug for prayers.” He asked that a request be relayed to all who would read these words: “I ask for everyone’s prayers — those who know me and those who don’t — that I will remain faithful always and that I will fully trust in God’s mercy.”

When he mentioned the incident from “Chariots of Fire,” he said he recalled the moment as he stretched out, face down, in front of the altar.

“I thought of being a runner at the starting line,” he said. “I kept thinking of the start of the race, when you hear, ‘On your mark. Get set. Go!'”

From the Beginning, ‘a Great Intensity’

“Ever since I first met him, I was aware of a great intensity in him, an intensity to serve,” Fr. Kaz said while taking a break from filming during a photo-op after Mass. “Mike’s profession of final vows is for us [Marians] as a community a moment of profound appreciation, that a man as gifted as Mike would want to be with us for life. It illustrates the great mystery of the Immaculate Conception and the great mystery of God’s love for us in sending such a person our way. God’s mercy manifests itself to us in the life of Our Lady and culminates in Jesus, who gives us the true gift of salvation. Mike is proof of that.”

Father Kaz said Br. Michael’s fervor should end up producing great good for the Church and her people.

“Mike, I am certain, is taking this task [as a Marian brother and soon-to-be priest] seriously, and that he understands its importance. There’s no doubt that if he stays open to the grace God wants to give him, Mike will do great good in leading others to salvation.”

In his homily, Fr. Dan said that normally, it takes 10 lay people to “keep a Marian in line.” In Br. Michael’s case, “it will take 100 of them.” The line brought laughter, and like most jests, contained the truth. The joke trenchantly brought home the intensity to which Fr. Kaz referred.

Father Dan also revealed a piece of news that, in terms of the Association of Marian Helpers, could only be considered a bombshell. He announced that Br. Michael is being groomed to be the next “Fr. Joseph, MIC,” to succeed Fr. Seraphim when the latter steps down, likely at the end of the year. The title “Fr. Joseph, MIC,” is given to the director of the Association of Marian Helpers, a spiritual benefit society that continues to prayerfully and financially support the priests and brothers of the Congregation of Marians of the Immaculate Conception.

This impending move to make Br. Michael the director of the Association has been known internally on Eden Hill for a month or so. Father Dan’s announcement was its first public mention. Although a starting date hasn’t been set, it is expected to occur early in 2011.

If all goes according to plan, Fr. Seraphim will devote his time to writing, and Br. Michael — who by that time will have been ordained a priest — will take over the direction of the Association and its membership of nearly two million people.

Father Dan said he solicited advice from numerous people in trying to decide on the proper fit for Br. Michael’s great talents. After much prayer, he decided on the leadership role as “Fr. Joseph.” He explained that “Fr. Joseph” serves not only as spiritual head of the Association but also to the employees who work for the Marians on Eden Hill. It is, Fr. Dan said, “a huge responsibility.”

Perhaps that was the “hidden meaning” in the selection of St. Joseph’s feast day for final vows. After all, as Fr. Dan dryly remarked, it’s “not your typical Marian feast day.”

Father Dan said he entrusted Br. Michael with this great leadership challenge because of his combination of youth (age 33), experience, common sense, and the qualities that make St. Joseph so endearing: humility, steadfastness, loyalty, and love.

It points to an exciting time ahead not only for Br. Michael Gaitley but also for everyone who has an interest in living and sharing Divine Mercy. 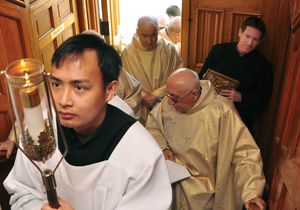 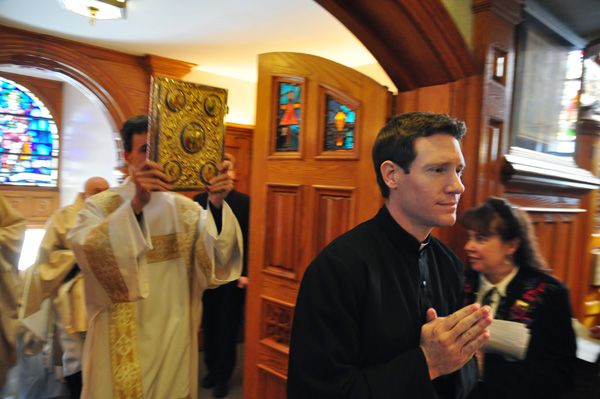 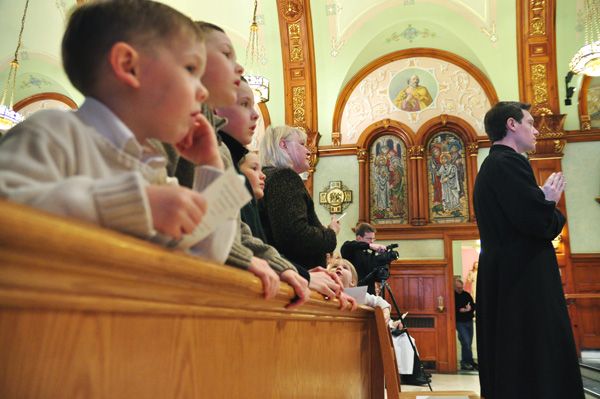 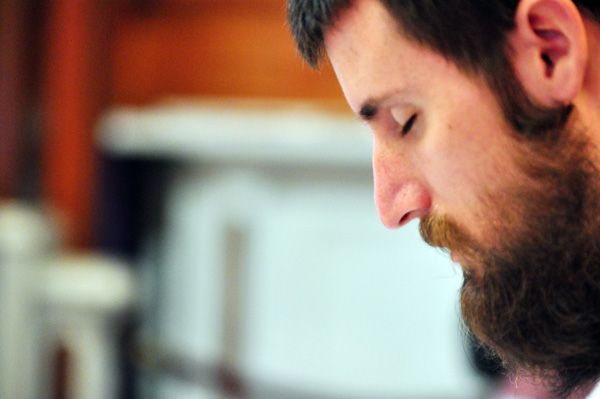 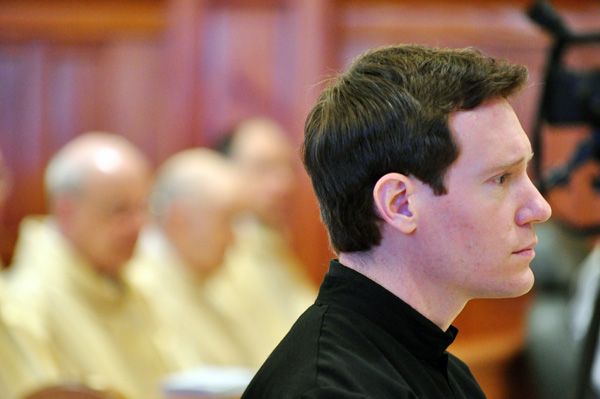 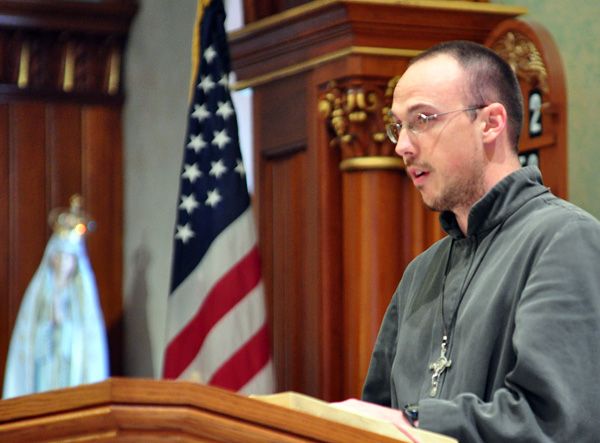 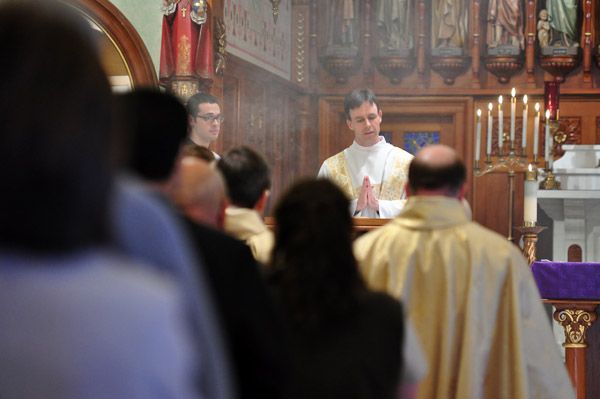 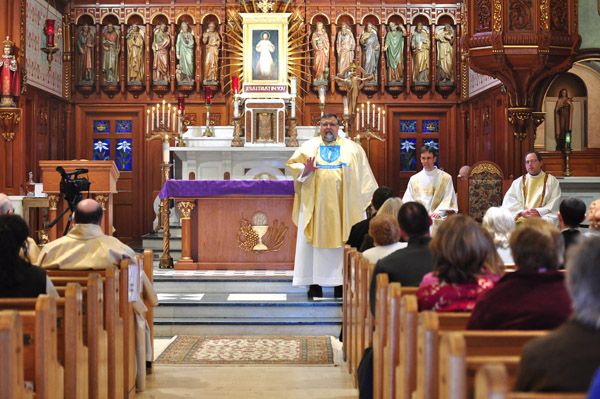 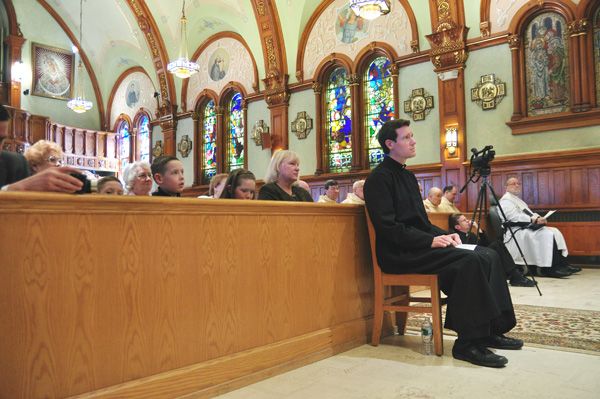 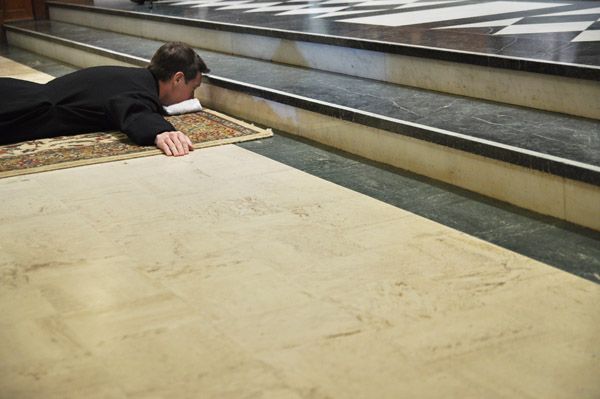 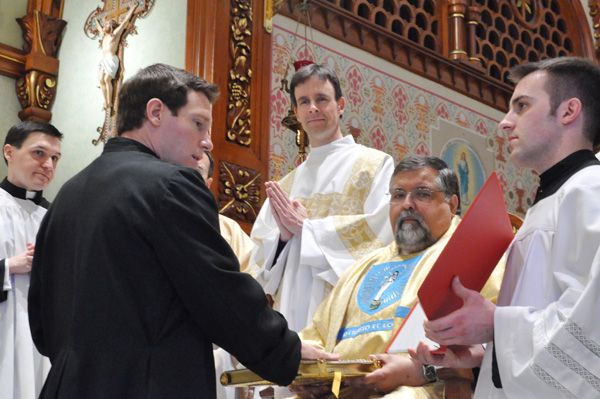 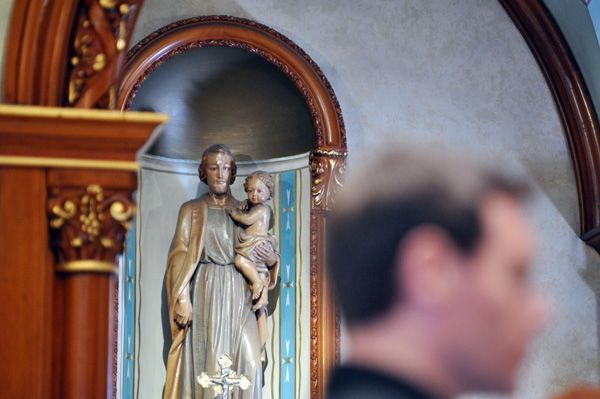 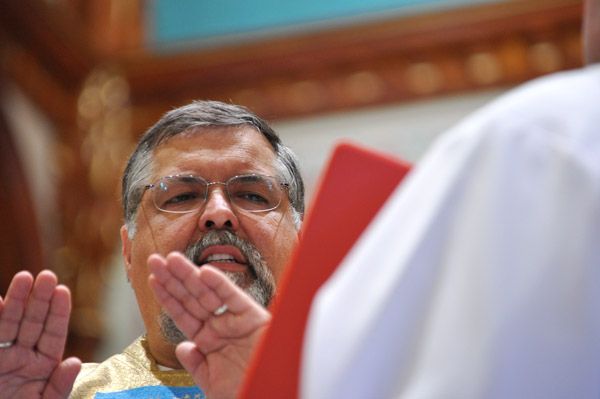 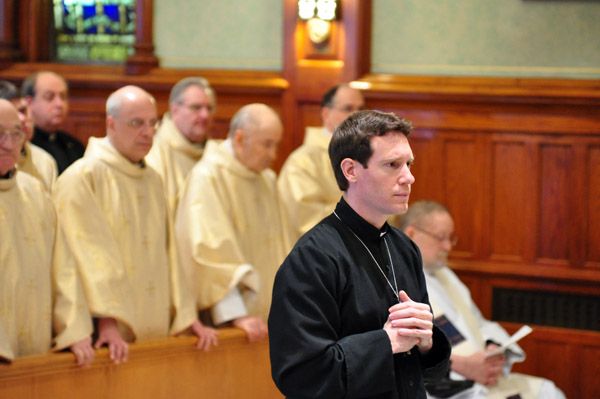 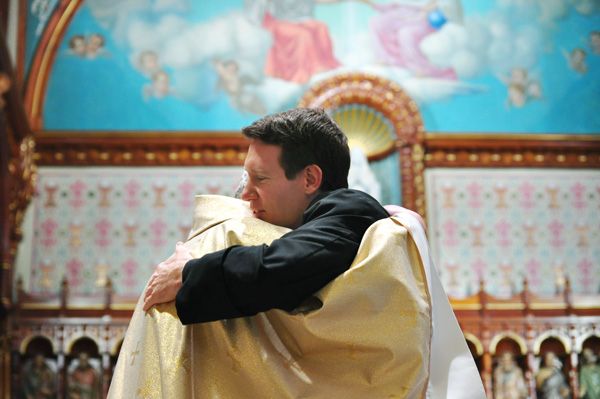 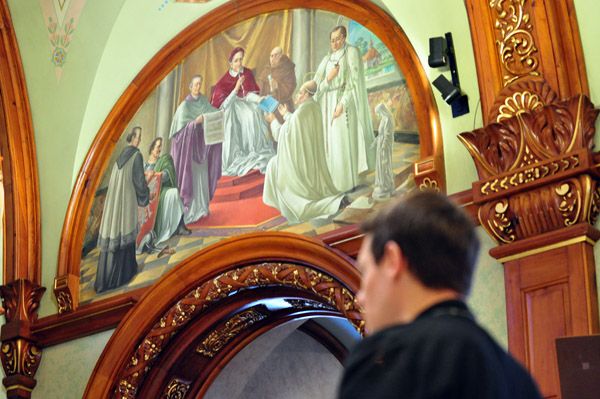 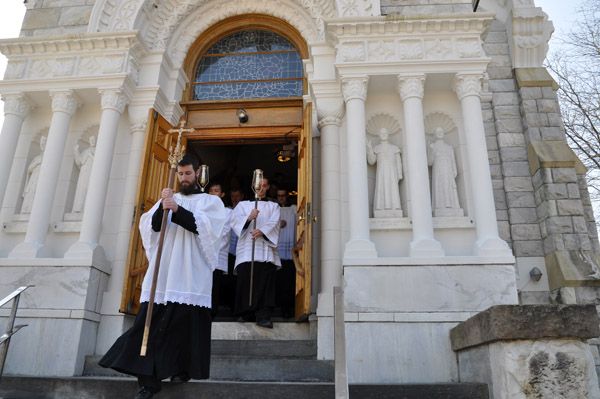 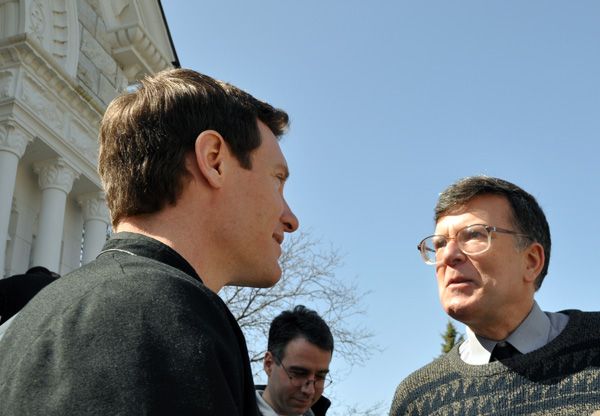 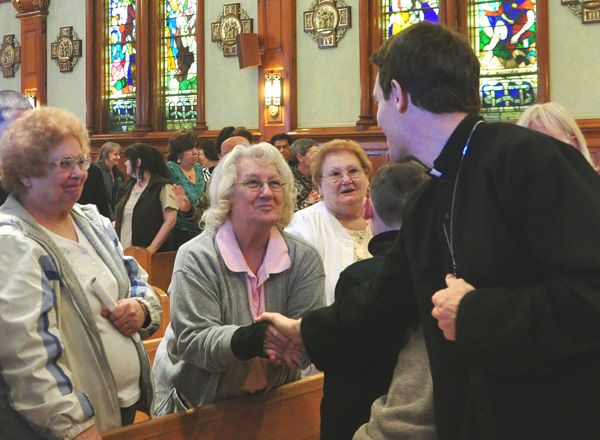