USA: The Marians Celebrate the Ordination of Jim McCormack, MIC

He joined the Marian Fathers of the Immaculate Conception five years ago — James Arthur McCormack, a gentle man, a book-smart former engineer who left a lucrative career and a fiancé to follow a call from God.

Joined by more than 100 family members, friends, and fellow Marians, he became “Fr. Jim” on Saturday, July 10, ordained to the sacred priesthood in his home parish, St. Patrick’s in Burlington, Conn.

In his self-proclaimed imperfection, he has vowed to model the sacrificial love of Christ through devotion to The Divine Mercy and Mary Immaculate. With fervor, with humility, and with gratitude to the Lord, his Marian brothers, and his family, Fr. Jim begins a new life seeking to fulfill his Marian vocation to work for the greater glory of God, the salvation of souls, and the good of the Church.

Before his hands were anointed with sacred oil, he received some advice from the principal celebrant of the ordination Mass, the Most Rev. Elliott G. Thomas, D.D., Bishop Emeritus of the U.S. Virgin Islands and an associate member of the Marian Fathers.

“Share with mankind the word of God you have received with joy,” Bishop Thomas said. “Meditate on the law of God, believe what you read, teach what you believe, and put into practice what you teach. … In the memorial of the Lord’s death and Resurrection, make every effort to die to sin and to walk in the new life of Christ.”

The ordination Mass had Fr. Jim’s imprint upon it, particularly the readings, which emphasized his priestly call focused on preaching the Gospel, dedicating his prayers, intentions and his very life in service to God’s people, helping them encounter the real love of the Merciful Savior.

From the first reading, Jeremiah 1:4-9, come the words that describe God’s hand in Fr. Jim’s life: “Before I formed you in the womb I knew you. … see, I place My words in your mouth!”

From the second reading, 1 Peter 5:1-4, come instructions, to “tend the flock of God in your midst, overseeing it not by constraint but willingly, as God would have it, not for shameful profit but eagerly.”

From the Gospel, Matthew 20:25b-28, come the sobering words of of Fr. Jim’s new responsibility — to serve rather than be served “and to give his life as a ransom to many.”

In an interview following his standing-room-only Mass of Thanksgiving (a.k.a “First Mass”) at the National Shrine of The Divine Mercy on Sunday morning, July 11, Fr. Jim credited a pre-ordination retreat for centering him on the theme of “denying the Lord nothing.”

He said, “That’s the great hope in my life, the great request I have, my prayer to the Lord, is that I deny Him nothing in my priestly ministry, and that I may be everything He wants me to be.”

‘How Happy He Is’

The first of two children of Arthur and Patricia McCormack, Fr. Jim is remembered in his hometown as responsible, introspective, polite, caring, and good-humored.

“I’ve known him since he was 3 or 4 years old,” said Marlene Beaudin of New Hartford, Conn. “Everyone likes him. We’re so grateful today.”

During Fr. Jim’s speech before cutting his celebratory cake on Saturday, Marlene stood up with a request of the newly ordained.

“Will you promise us you will return and say Mass here once a year?” she said.

The crowd seconded the suggestion.

“At least once a year!” Fr. Jim responded to resounding applause.

“I say to his mother all the time, ‘You don’t know how blessed you are,'” Marlene said.

In fact, Fr. Jim’s mother knows very well how blessed she is.

“I know mothers are supposed to say their sons are kind and compassionate,” Patricia said. “But he really is. I love him. He’s my best friend.”

“Just seeing how happy he is, makes all of us so happy,” said Fr. Jim’s sister, Kelly Murray.

A Call He Couldn’t Ignore

Father Jim received his bachelor’s degree from Yale University and his master’s at Stanford University. Following graduate school, he worked in Colorado for seven years designing microprocessors for Hewlett Packard.

It was during graduate school when Fr. Jim first had a sense of a religious calling, “but I did my best to ignore it,” he said with a laugh.

After he broke up with his fiancée, he decided to take God’s call seriously. He went on a two-week pilgrimage to Italy during Easter in 2002. The trip included a powerful visit to the Holy House of Loreto, one of the world’s foremost shrines of the Virgin Mary.

In Loreto, he felt Our Lady helping him to understand that she is always there leading him to her Son.

“Due to Mary’s help, I came away from that pilgrimage with a deep sense of peace about becoming a priest,” he said.

The weekend-long celebration of Fr. Jim’s ordination and First Mass also coincided with his birthday. He turned 38 on Sunday. For Fr. Jim, the greatest gift was his priesthood. For the Marians, the gift was Fr. Jim.

“Over the years, you have been an inspiration of love through our community,” said the Marians’ Provincial Superior, the Very Rev. Fr. Dan Cambra, MIC, in his homily on Sunday. “Repeatedly, Jim, you’ve already demonstrated an ability to do the kind thing, the loving thing.”

Father Dan continued, “You’re not ordained because of all of your intelligence. You are ordained to the priesthood precisely because you have the gift for loving others, the gift to be merciful, and we recognize in you our frail humanity. In the midst of all that frail humanity, God will transform you into something great and glorious.”

Father Jim dedicated his priestly ordination to the memory of Fr. Mark Garrow, MIC, who died from cancer in 2007. Father Jim’s Marian brothers often compare Fr. Jim to Fr. Mark, a teacher and mentor beloved for his gentleness, his humility, his spirituality, and his enduring and indomitable smile.

Like Fr. Mark in his last days, Fr. Jim serves at the Marian House of Studies on the campus of The Catholic University of America, in Washington, D.C. And like Fr. Mark, he instructs Marian novices about the Marian Community and the religious life.

“I feel a ton of joy,” Fr. Jim said on Sunday just before a long line formed to receive a personal blessing from him. “I’m so grateful for my family and friends. I feel just a ton of joy for the opportunity to give my life in sacrifice to our Lord and to serve His people.” 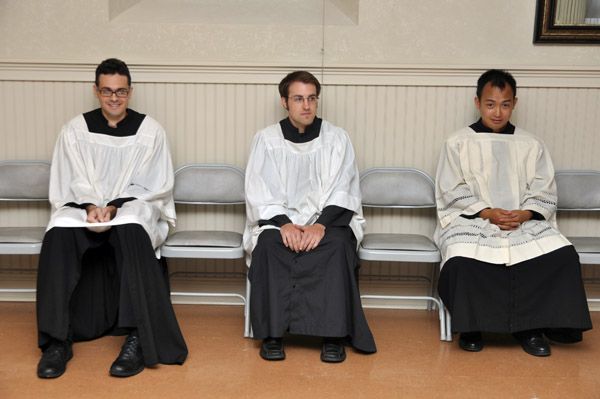 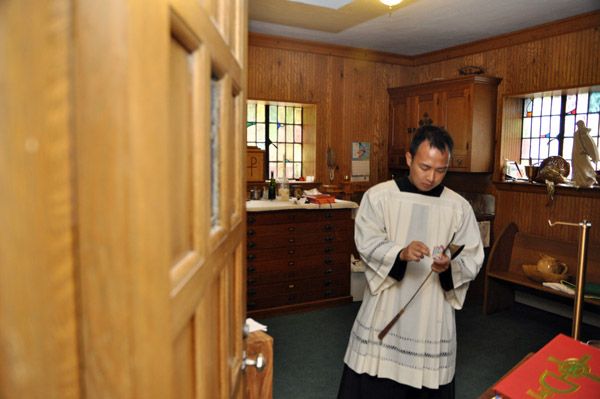 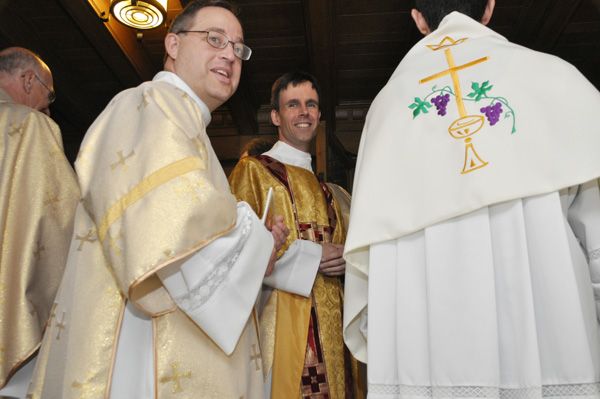 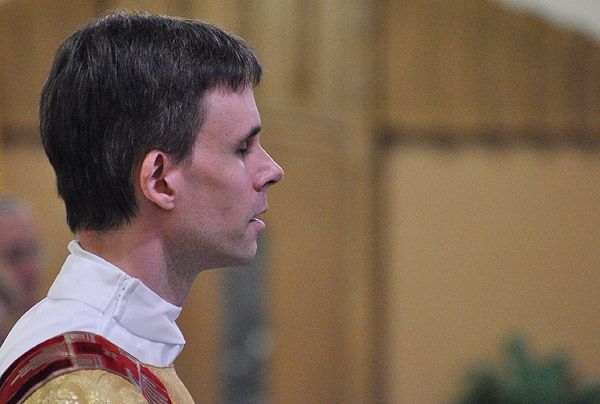 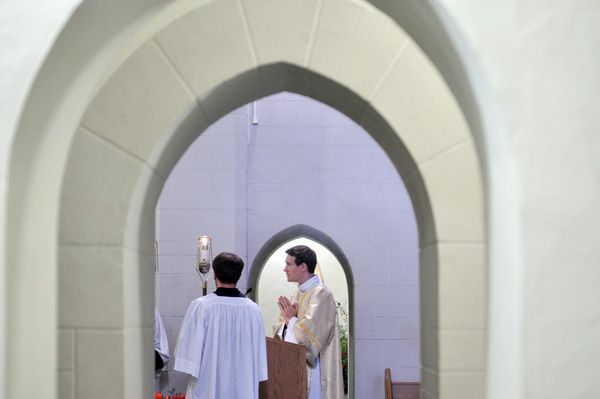 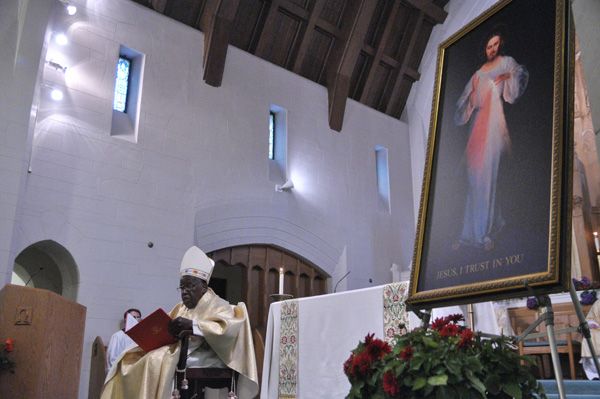 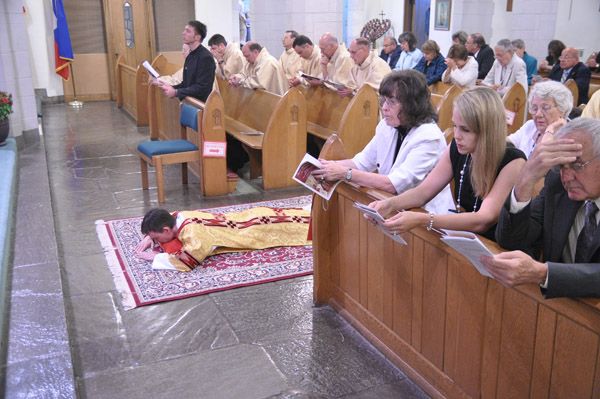 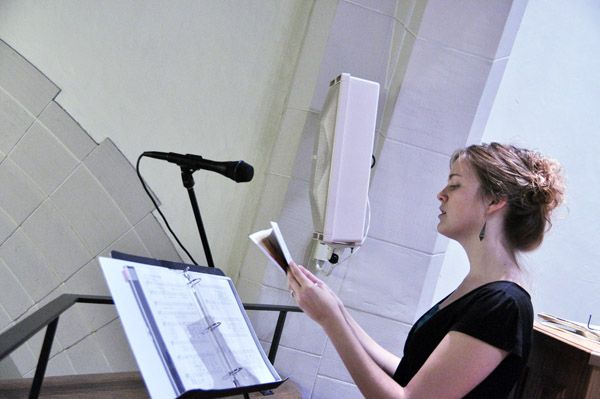 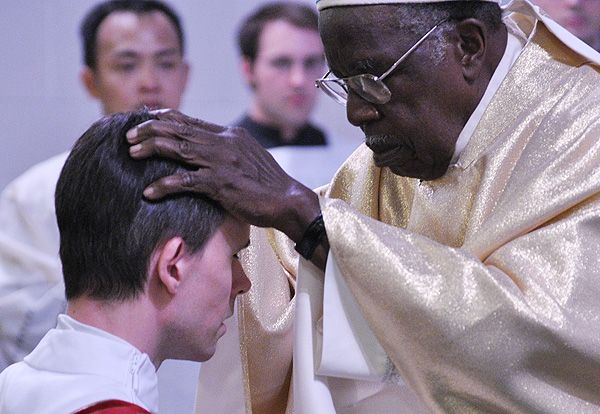 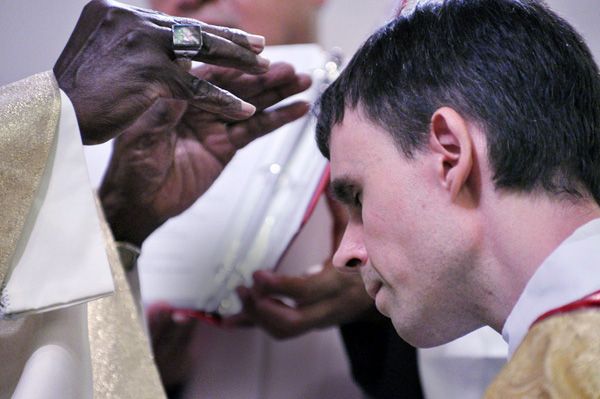 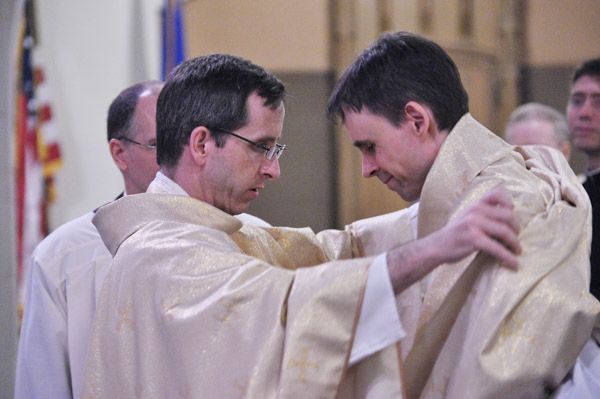 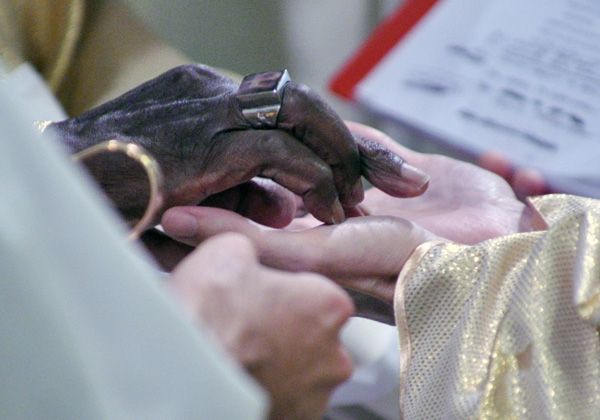 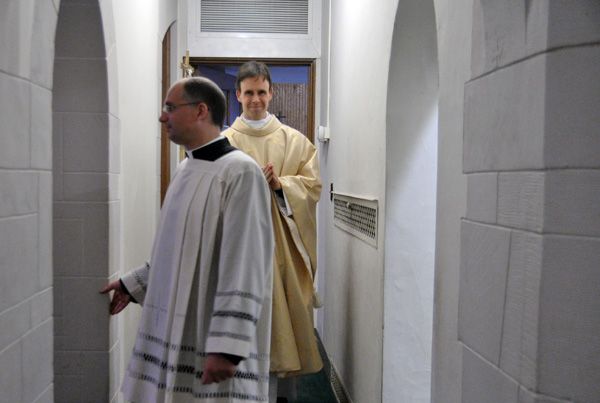 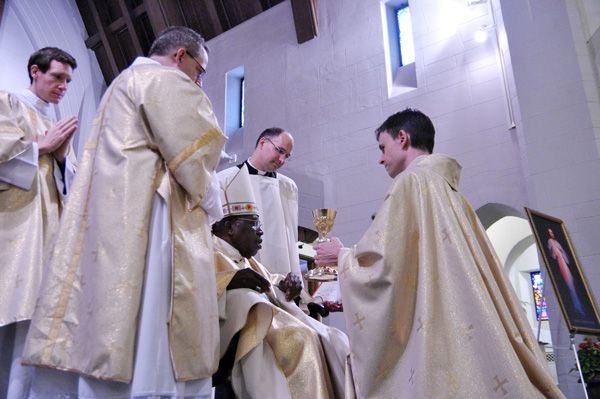 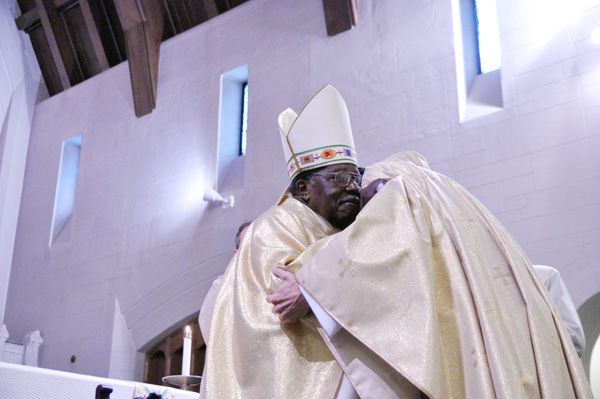 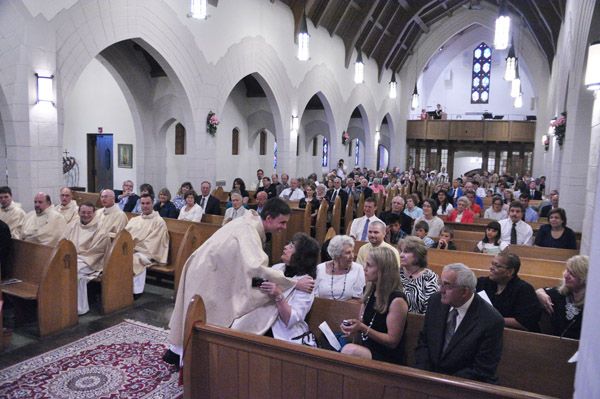 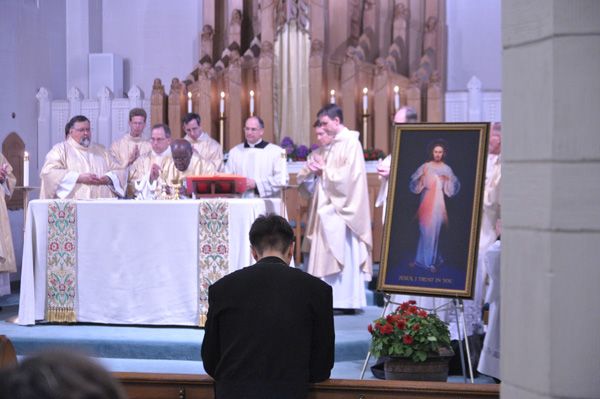 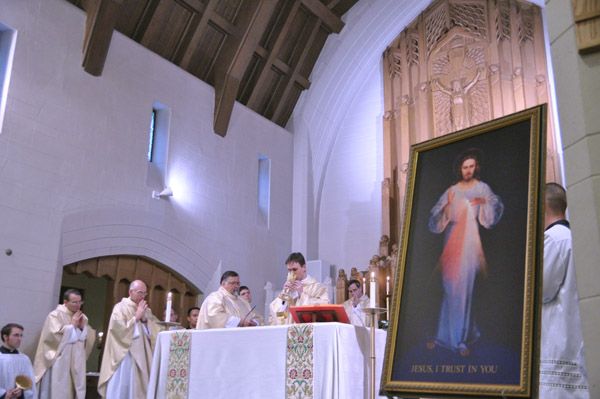 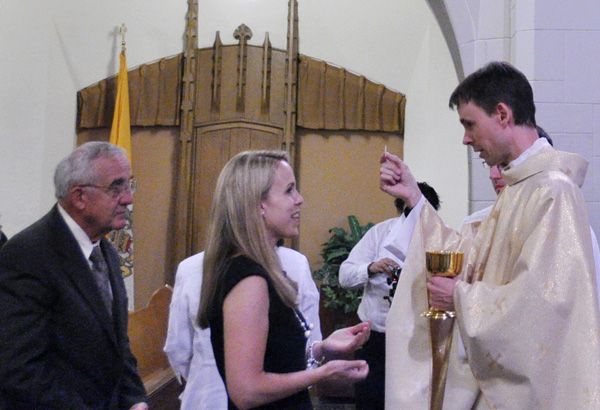 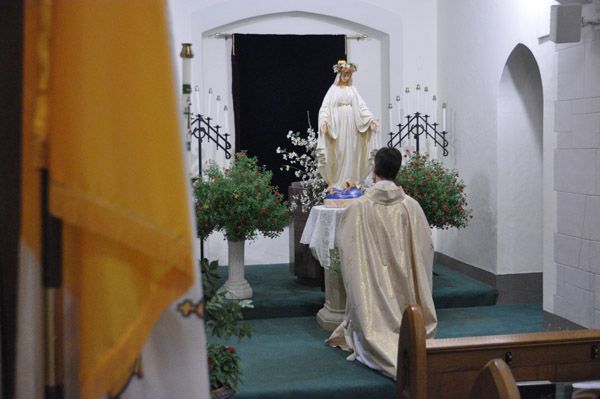 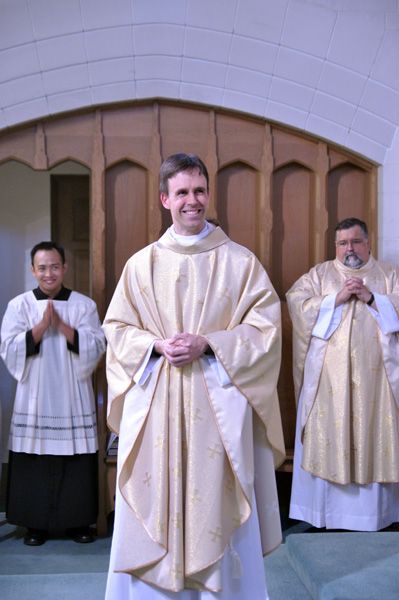 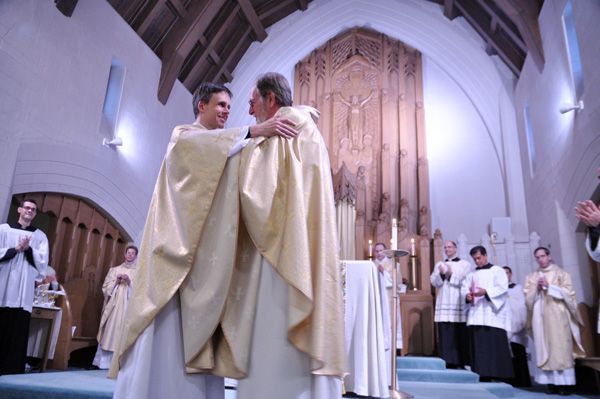 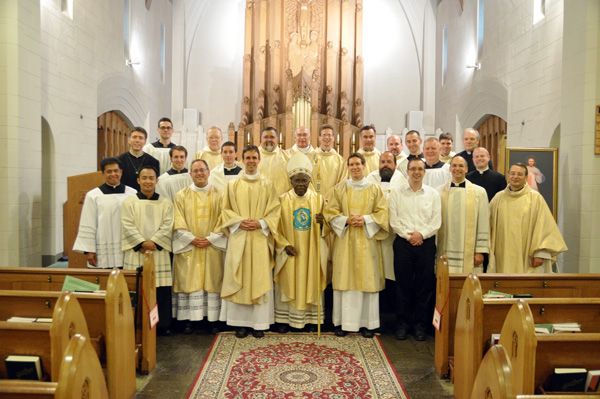 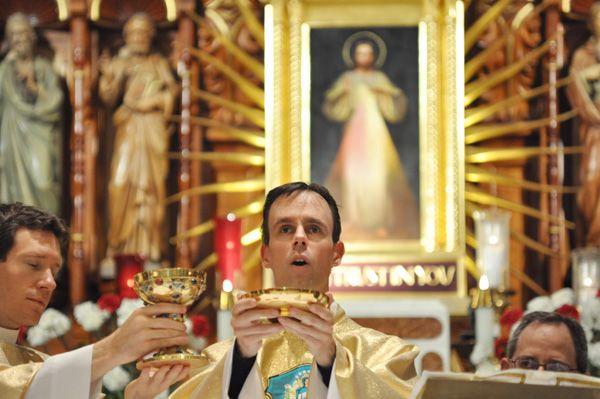 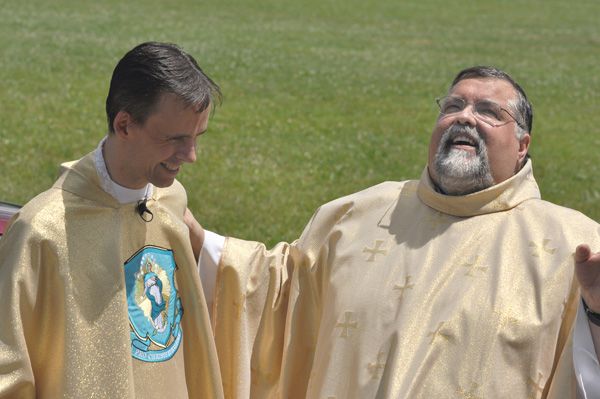 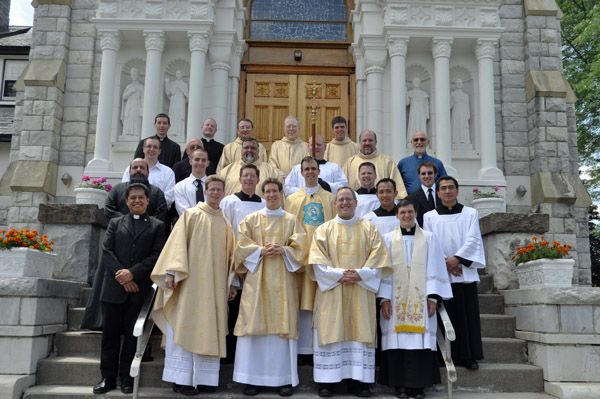 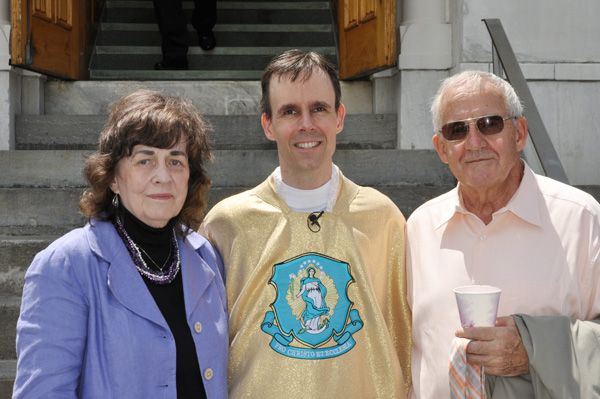