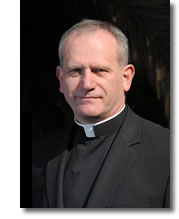 By the decision of the General Chapter of the Congregation of Marian Fathers of the Immaculate Conception of the Most Blessed Virgin Mary, in session on February 7, 2011, Fr. Andrzej Pakuła, MIC, a member of the Polish Province, was elected General Superior for the period of 2011-2017.

Father Andrzej Pakuła (born in 1964), is a native of the town of Jacnia in the parish of Krasnobród (Zamość-Lubaczów diocese). In 1984, he joined the Congregation of Marian Fathers and made his first profession of vows in the following year. In 1991, he was ordained to the priesthood. Among his duties in his native Province were those of the pastor at the Marian parish in Zakopane-Cyrhla, superior of the seminarian house, prefect of the students, professor of Theology of Spirituality at the Marian Seminary, and Provincial Prefect of Formation. In 1999-2005, he carried out the duties of the Superior of the Polish Province of our Congregation. During the last six years, he served on our Congregation’s General Government, as its 3rd General Councilor. He also held the office of General Postulator and was in charge of the beatification and canonization causes of the Marian Blesseds and Servants of God.

Father Pakuła obtained his Doctoral Degree in 2009, by defending the thesis “Religious Spirituality according to Stanislaus Papczyński and the Early Tradition of the Marian Fathers,” which he prepared at the Institute of Theology of Spirituality, at the Faculty of Theology of the Jan Paul II Catholic University of Lublin, under the direction of Fr. Associate Professor Jerzy Misiurek. Father Pakuła is the Editor of Pisma zebrane [Selected Works] of Blessed Stanislaus Papczyński, as well as of other books from the series on history and spirituality of the Marians.

In the Office of the General Superior, Fr. Pakuła succeeds Fr. Jan M. Rokosz, who carried out this duty for the past six years.