On the Solemnity of the Assumption, a joyous day for our growing congregation.

The richness of new vocations continues to bless the Marian Fathers of the Immaculate Conception, who celebrated the feast of Mary’s Assumption into heaven by witnessing eight new men profess religious vows for the first time.

Father Kaz called each of the men, one by one and by name, to step forward to recite the moving words of profession:

I, (name), for the glory of God and the honor
of the Most Blessed Virgin Mary and all the
Saints, in the presence of the entire Community,
through your hands, most Reverend Father, vow
to Almighty God in the Congregation of Marian
Fathers of the Immaculate Conception of the Most
Blessed Virgin Mary, according to its Constitutions,
the three vows: of chastity, poverty, and obedience
for one year. So help me God and this holy Gospel.

Following the profession, Fr. Kaz confirmed the vows, accepting the men into the Congregation and proclaiming, “I earnestly commend you to God Almighty and to Mary Immaculate, our Mother and Patroness, that you may be able to joyfully and faithfully carry out your vows, unite with God, [and] attain holiness and eternal life.”

The young men then processed out of the National Shrine and downstairs into the sacristy. There, they changed from the white shirts and black pants of novices and, for the first time, assumed black clerical garb.

“I’m overwhelmed with joy,” said Br. Guiseppe as he struggled with the buttons of his cassock. “My heart is like a vase, and Our Lady has been filling it with roses.”

Brother Joe Lappe said, “It’s been a growing experience. I had the chance to grow more as a person, and now I have a better knowledge of who I am. God is calling me to a phenomenal life in His love.”

Brother Abel Ruiz spoke for all the newly professed: “I want to express our thanks to all the Marian Helpers for all their support and prayers. And we ask them to continue to pray for us.”

Father Joe Roesch, MIC, vicar general of the Marian Fathers, came from Rome to preside at Mass. Father Joe, who as ranking superior would typically accept and confirm the vows, ceded this authority to Fr. Kaz, whom the Marians recently elected provincial superior.

In his homily, Fr. Joe said Mary’s Assumption, in which she was “raised body and soul into heaven, is a foretaste of what God has in store for each of us.” He said that in God’s desire to see us in heaven, “God spares no effort to get us there.”

God, he said, employs many methods in doing this, including the lives of the consecrated religious, who live as witnesses, models, and examples for the rest of us, “to show us that it is possible to become holy.”

Father Joe called the Assumption “the ultimate witness and model” for people to use as the guide to holiness. He urged the congregation, the newly professed, his Marian brothers, and the assembly to pray that all will one day be in heaven, “as she is,” both body and soul.

“Our Lady shows us the way for what is [spiritually] possible,” Fr. Joe said, adding that if we surrender our will as she did, trust in her Son as she did, and be open to His guidance as she was, “we can get to heaven.” We’re being invited to stand with Christ and to stand with Mary” so that we can attain our “ultimate victory over death.”

In that last reference, Fr. Joe alluded to the second reading, from St. Paul’s first Letter to the Corinthians (1 Cor 15:20-27). That passage ends: “The last enemy to be destroyed is death, for He subjected everything under his feet.”

‘Offer Your Lives to God Without Hesitation’

In addressing the newly professed, Fr. Joe mentioned the arduousness of their novitiate experience: “The novitiate is not easy. Like Jesus in the desert, you confront your strengths and weaknesses.” He shared advice that he received when he professed his first vows, from then-Superior Fr. Donald Petraitis, MIC: “Offer your lives to God without hesitation.”

Dear friend of the Marians, Deacon Bob Digan from nearby St. Mary’s Parish in Lee, Mass., proclaimed the Gospel and assisted at the altar. Brothers David Blasland, MIC, and John Luth, MIC, served as lectors. Brother Ken Galisa, MIC, sang in the choir. The newly professed acted as gift bearers. 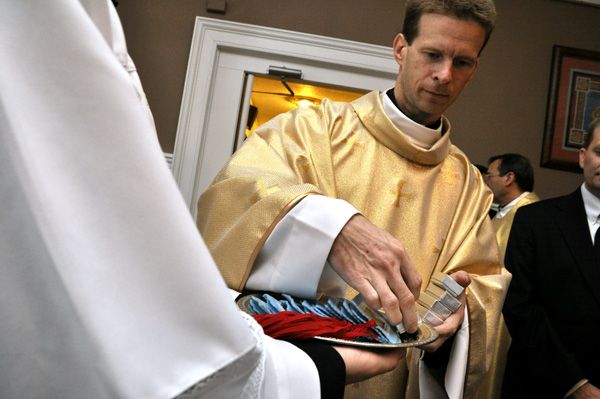 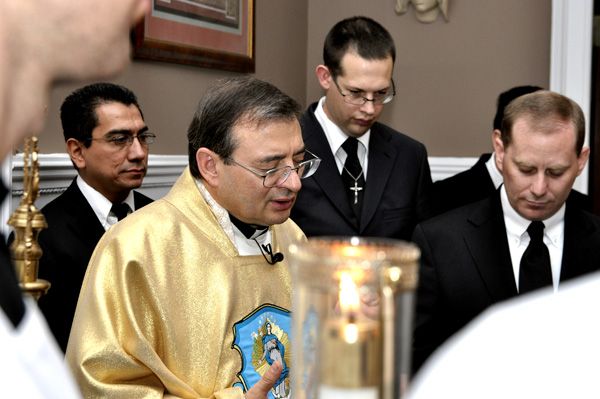 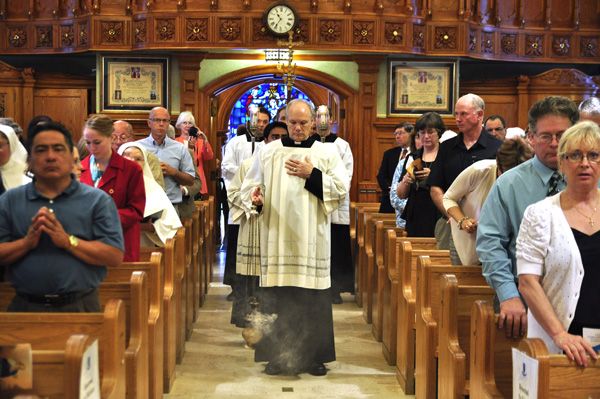 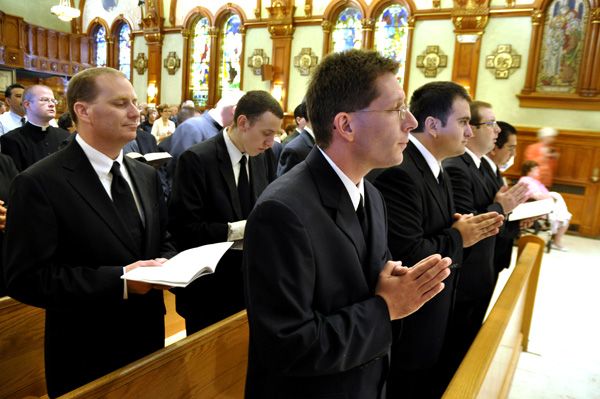 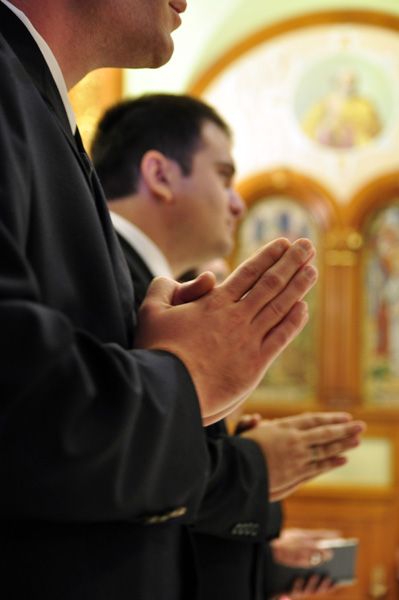 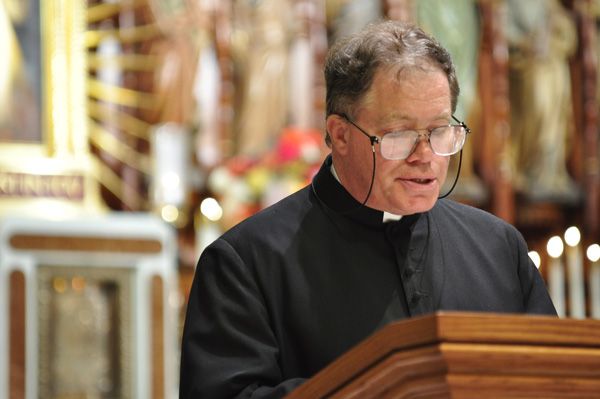 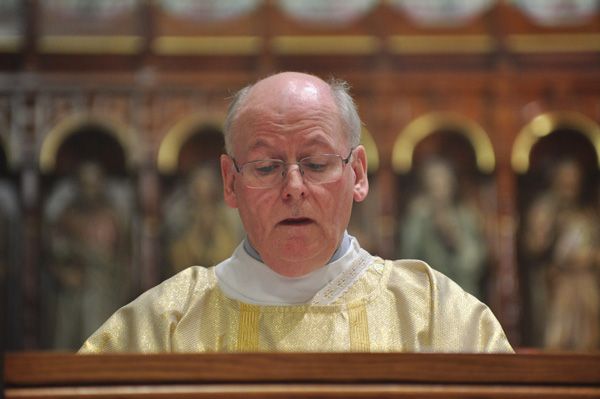 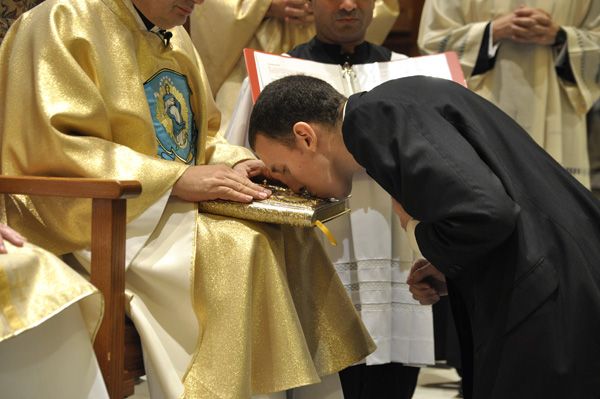 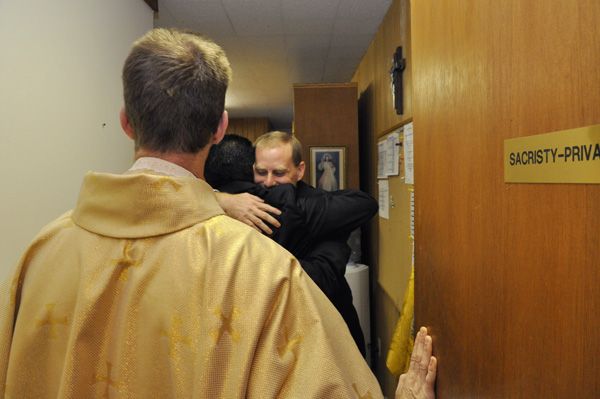 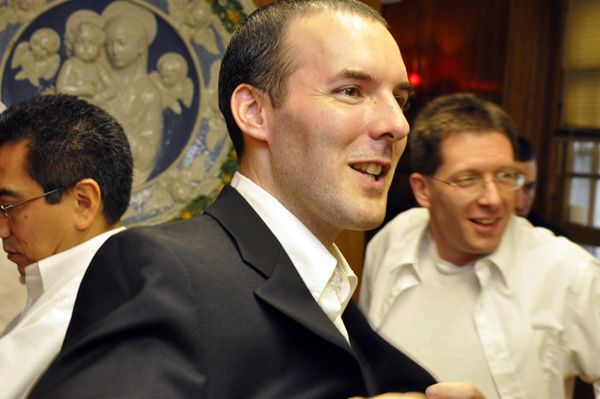 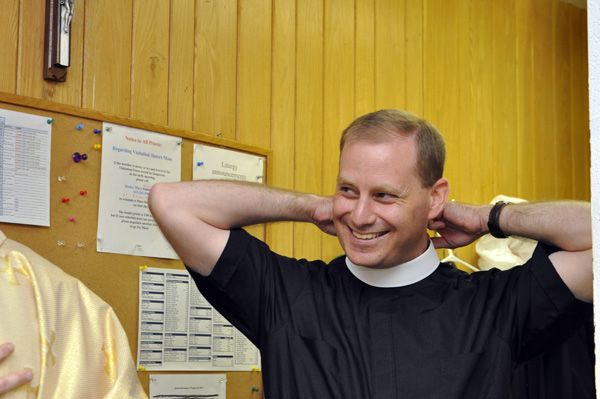 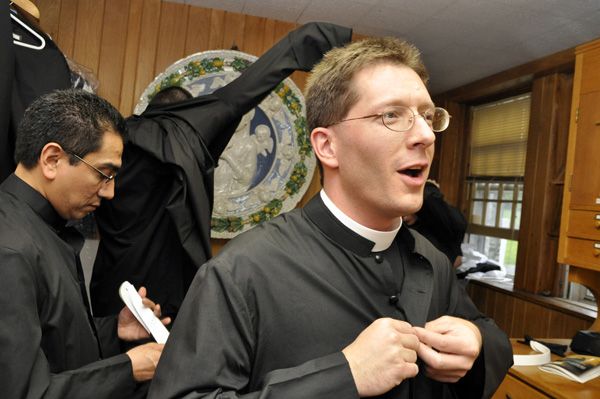 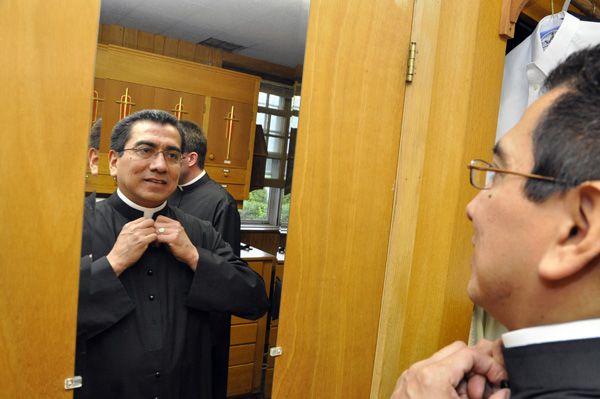 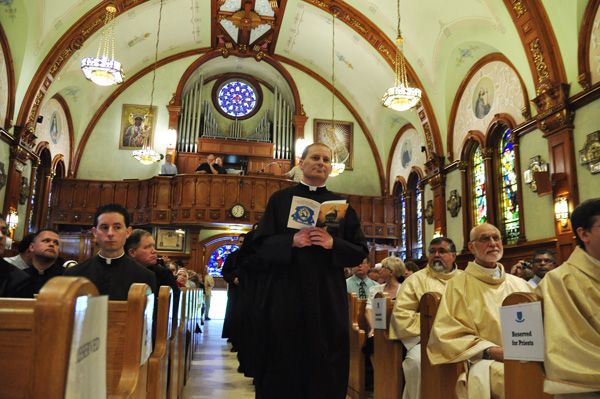 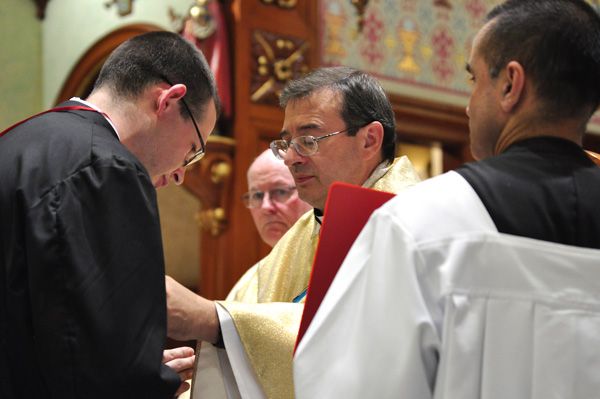 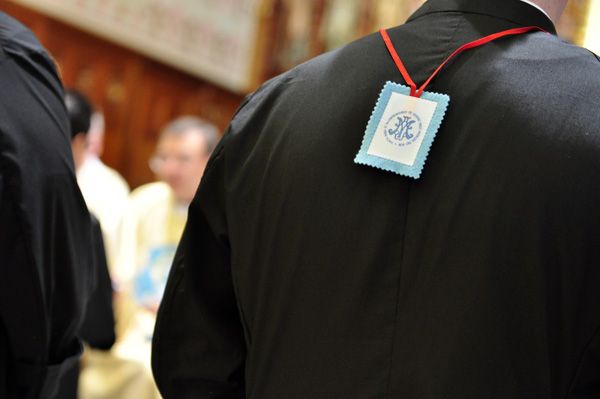 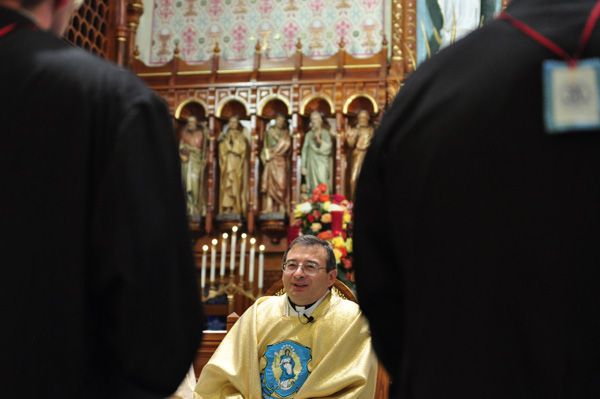 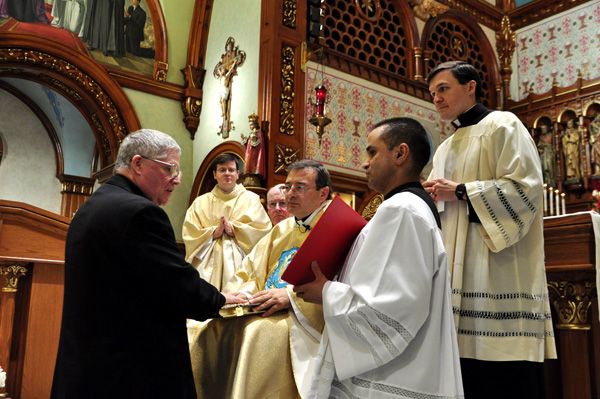 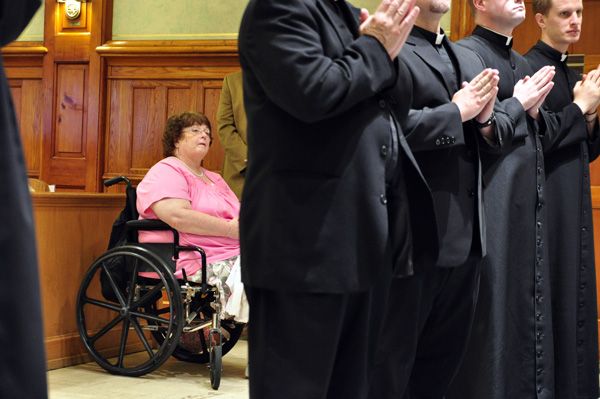 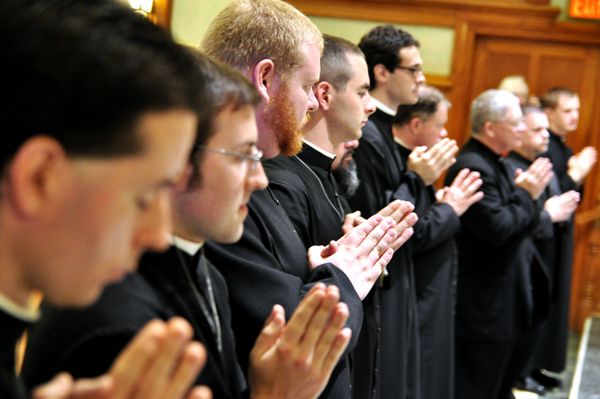 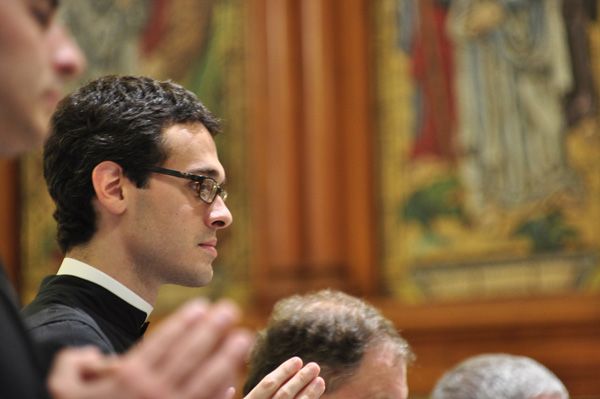 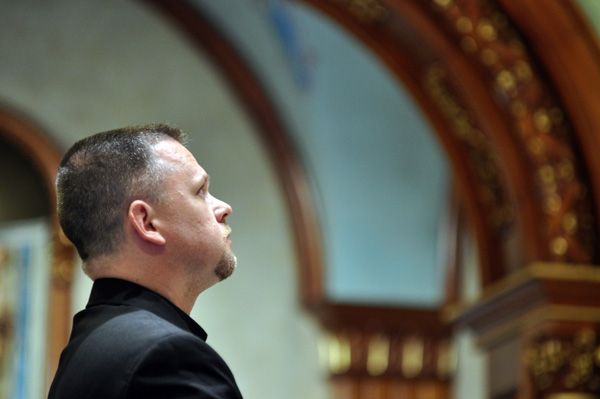 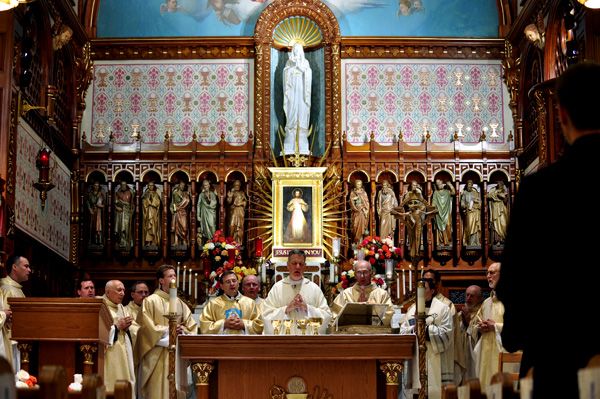 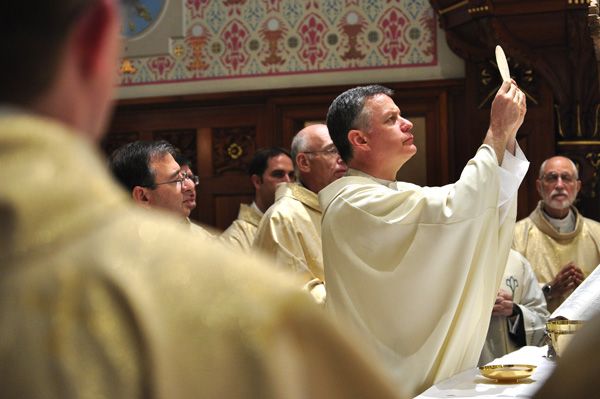 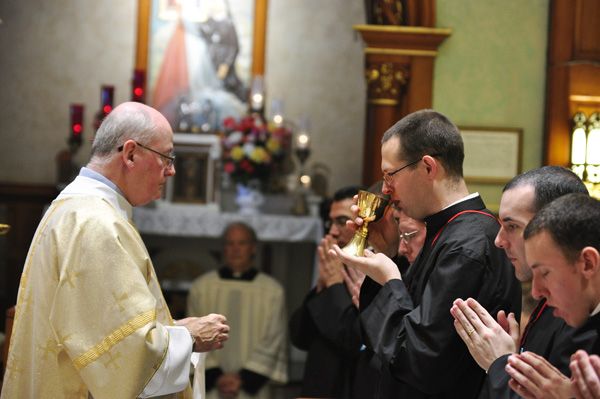 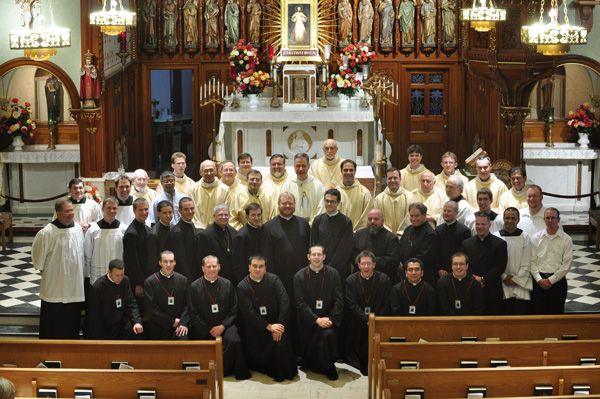 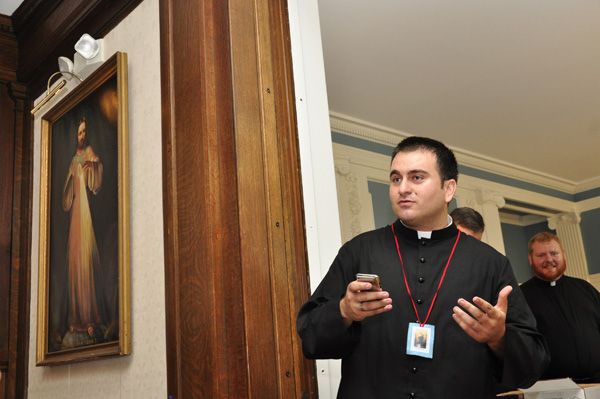