Through the efforts of the Vice-Postulator of the Marian Canonization Causes in North America and Asia, Marian Press produced two new books and a large-format poster (42cm by 53.5cm) with Blessed George’s photo taken in Chicago in 1926. 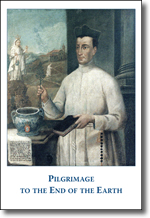 Pilgrimage to the End of the Earth by Fr. Zygmunt Proczek, MIC, who brings us the biography of the Venerable Servant of God Fr. Casimir Wyszyński (color photo section, Marian Press, Stockbridge, 2012); and 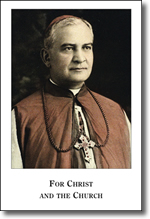 For Christ and the Church, a brief bio of Blessed George and excerpts from his letters. The book, which includes a section, honors the 25th anniversary of his beatification. 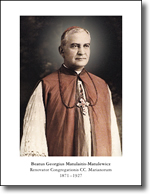 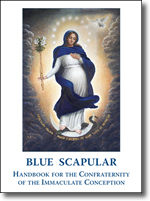 Also, the General Promoter of the Confraternity of the Immaculate Conception of the Most Blessed Virgin Mary has produced a long-awaited handbook for the Confraternity members titled Blue Scapular (Marian Press, Stockbridge, 2012). This book is a small compendium of knowledge necessary for everyone interested in the Blue Scapular and the Confraternity, which has existed in our Congregation since the beginning of the 18th century.

In January 2012, the company Vit-Verit from Częstochowa minted silver medals of our Congregation, which are also the Scapular medals and can be worn in place of the Scapular of the Immaculate Conception made out of fabric. The image of Our Lady on the medal is the copy of the one displayed on the coat-of-arms of the Congregation of Marian Fathers. These medals, meant primarily for the Congregation’s newly professed members, were produced through the efforts of the General Promoter of the Confraternity of the Immaculate Conception with the permission of the General Superior.

All who would like to obtain the above-mentioned materials are asked to contact Br. Andrew Mączyński, MIC by e-mail: [email protected] or by post, writing to: 4 Prospect Hill Rd., Eden Hill, Stockbridge, MA 01262, U.S.A.