Five young men professed their first vows as members of the Marian Fathers during Holy Mass on the Solemnity of the Assumption of the Blessed Mother into heaven, Wednesday, Aug. 15, at the National Shrine of The Divine Mercy, Eden Hill, Stockbridge, Mass.

… for the glory of God and the honor of the Most Blessed Virgin Mary and all the saints, in the presence of the entire community, through your hands, most reverend father, vow to almighty God … the three vows … So help my God and this holy Gospel.

With the vows, they became Br. Alexander, Br. Scott, Br. Kevin, Br. David, and Br. Joel, with the suffix “MIC” indicating their membership in the community.

A Tough Question Asked and Answered, in the Affirmative
“To see something like this is extraordinary,” said Fr. Kaz in his homily. “God has chosen these five young men you see here for these vows.” Father Kaz then presented a related reflection on the meaning of the solemnity of Mary’s Assumption into heaven, which he called “a singular participation in her Son’s resurrection” as well as a precursor to the anticipated participation of all of us — body, soul, and spirit — in that resurrection as well.

“These five men have just spent one whole year in the novitiate,” Fr. Kaz said. It was a year “of soul searching, of discernment, of letting go of everything. Each one looked into his heart and asked a question: ‘Do I need to be here today?’ Each one of them here today answered, ‘yes.'” Father Kaz said they heard and answered the call of God, and he gave thanks and praise to God, for “The Lord has brought them this far. They are here, asking God: ‘Help me to fulfill your mission for my life.'”

Father Kaz told the five that he identified with them in a deep and profound way: “I share your journey [in the religious life], so it is a great joy for my heart [to see you choose] a life of faith.” Just as Jesus sent His disciples to preach the Good Word, Fr. Kaz says, “These are the words that Jesus has for us today.”

We invite you to watch his homily:

Father Kaz then thanked the parents, families, and friends of the five new Marian brothers “for the gift of faith. You have given them the foundation of faith. This is how our faith is nourished.”

Each of the five men then professed their vows, which Father Kaz accepted and confirmed on behalf of the Marians and the Church. He presented the new brothers with the blue scapular. The blue scapular of Our Lady serves as a sign of honoring and imitating Mary, an invitation for the wearer “to give Christ … your undivided service in the Church.”

The five new brothers then processed to the sacristy, where they would for the first time don ecclesiastic garments. The change of clothing symbolizes to putting away of the old life and the taking up of the new. Father Kaz prayed that God “remove from your heart the vanity of this world, which you renounced at your baptism. May the Lord vest you in ‘the new man,’ who was created according to God in justice and true holiness.”

Fourteen Marians Renew Their Vows; Three Enter as Postulants
The celebration also included the renewal of vows by 14 Marian brothers. Father Kaz told them: “You have lived with us. We may not have given you the best example [of holiness], and still you say ‘yes’ to God’s plan for your life.” To the 19 men — the five new brothers and the 14 brothers who renewed their vows — Fr. Kaz said, “It is my wish for all of you, for all of us … to persevere to overcome sin so that we may use our power to bring people into His Kingdom. We will pray for you, that you will fulfill God’s will for your lives.”

The evening before, the Marian Fathers also welcomed three men into the community as postulants. Father Mark Baron sees this influx of new men as a sign “that the Lord continued to nourish” the Congregation.

Left Behind: A Year of ‘Spiritual Boot Camp’
Prior to the celebration of Mass, Fr. Dante Aguero, MIC, of the Marian mission in Argentina, said the day “shows us the presence of the Holy Spirit working in these young men. They have been attracted to life, to a new life in Christ. This is part of the work of Blessed John Paul II, who inspired so many young men and women to religious life. He planted the seed, watered it, and now we are seeing the fruit.”

“One thing I noticed last night,” said Fr. Jim McCormack, MIC, “is how the guys who were novices last year were already acting as ‘big brothers’ to this year’s novice class. I was filled with a sense of gratitude and fulfillment. That year in the novitiate has its difficulties. It’s a tough year, with its ups and downs, where you perform intense examination and inventory on your life. It’s a year where God really works on us. We jokingly refer to it as ‘spiritual boot camp,’ but there’s a lot of truth in that. So those of us who have been there know what these young men experienced, we try to be here for them with any help and assistance we can provide.”

Following Mass, the assembly gathered in the Great Room at the Marian monastery attached to the National Shrine to enjoy lunch. The five new brothers each addressed the crowd, thanking them for their prayers and support. They also thanked Jesus, Mary, and Fr. Mark, their novitiate master, family, and friends for bringing them through the year.

‘Oneness in Work, Camaraderie in Humor
Father Mark said this year’s novitiate class will be remembered for its ability to work as a group, to sublimate individual egos and personalities, and to help one another to persevere, particularly in tough moments. He also personally thanked them for “helping to fill in the gaps” during his instruction where it might have faltered or come up short, and for their “oneness in work.” It also was a class with a great sense of humor, he said, and many times their classwork was interrupted with laughter, which brought to the class a unique camaraderie. 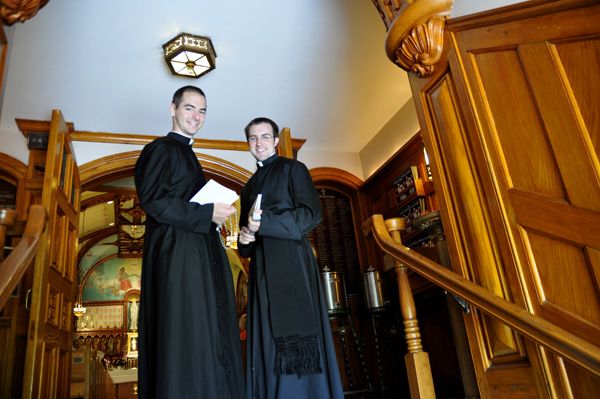 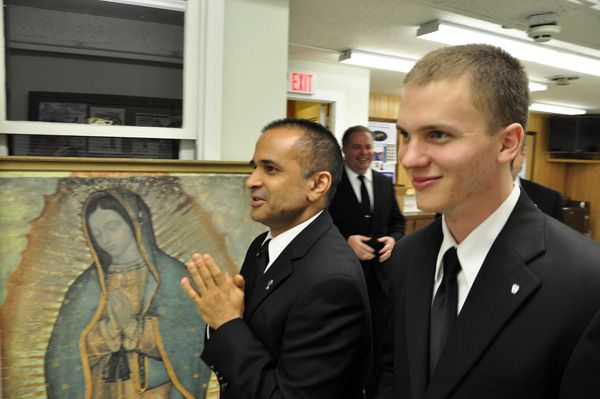 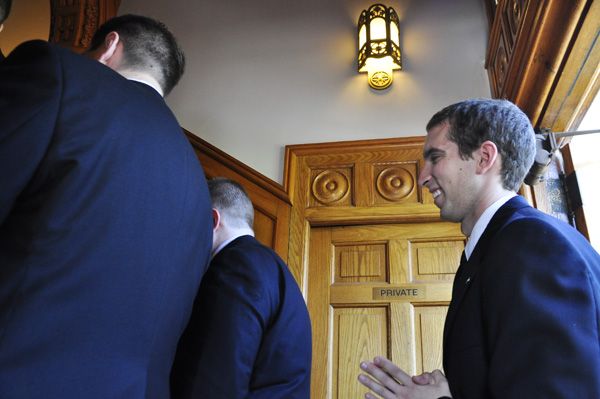 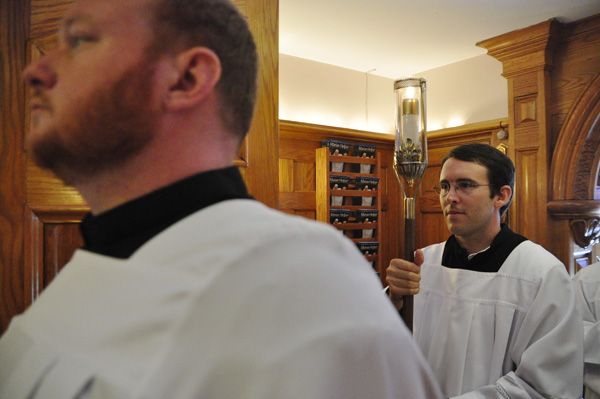 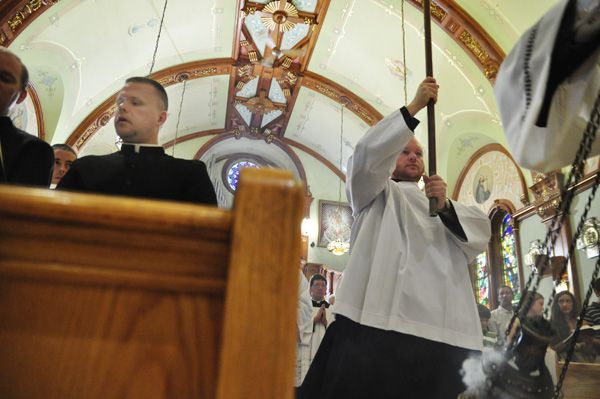 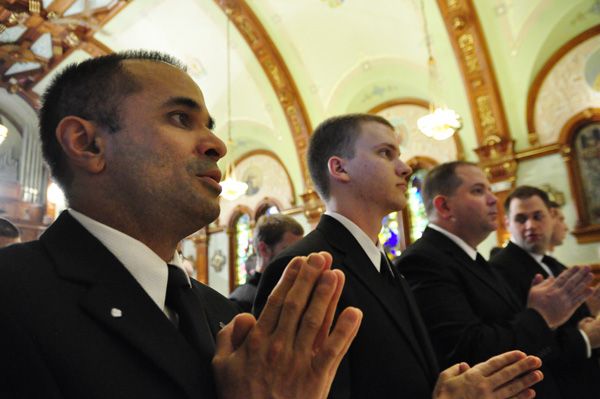 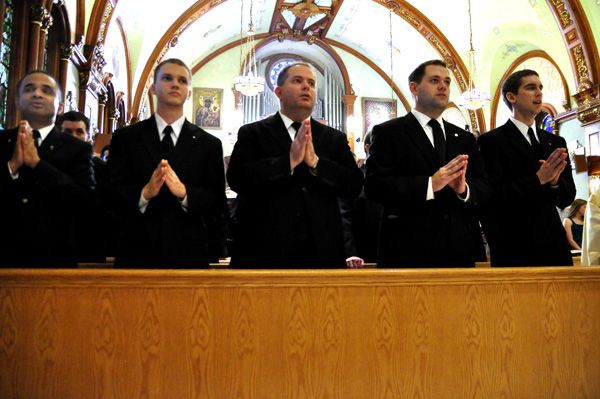 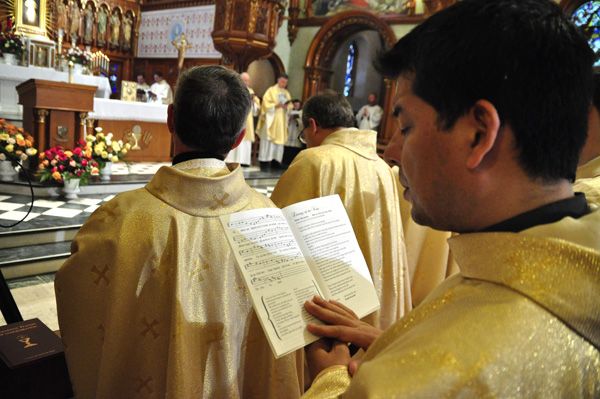 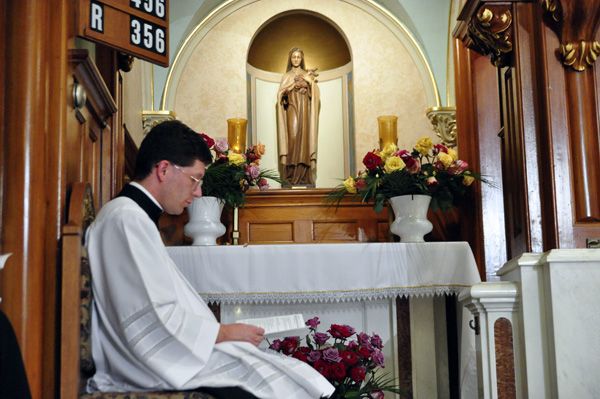 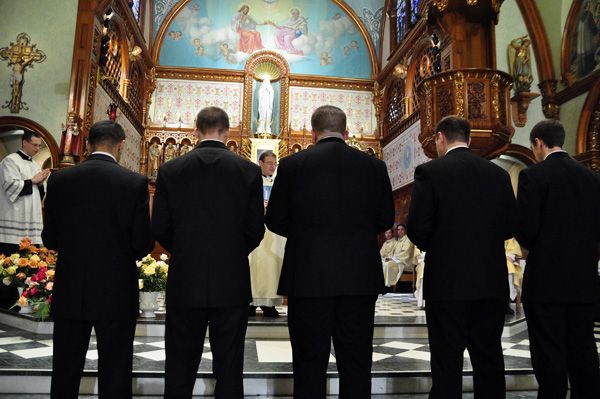 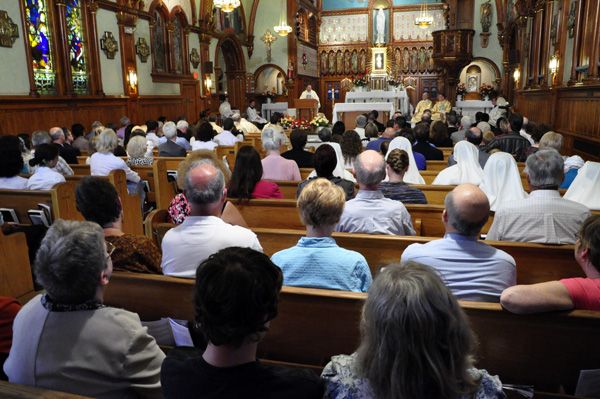 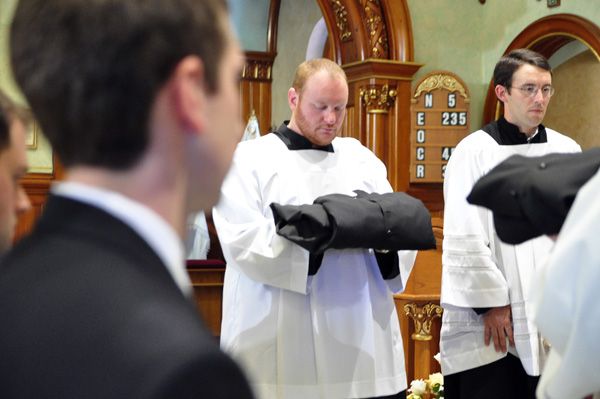 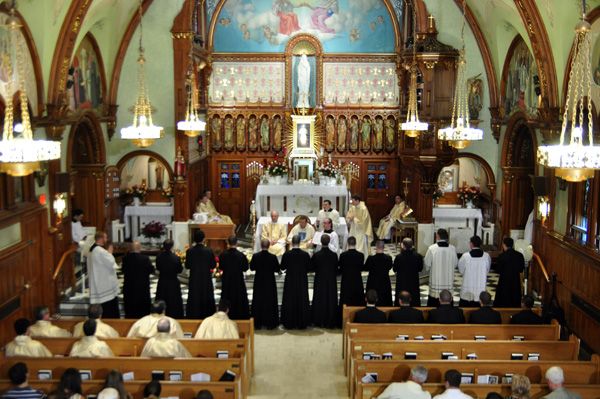 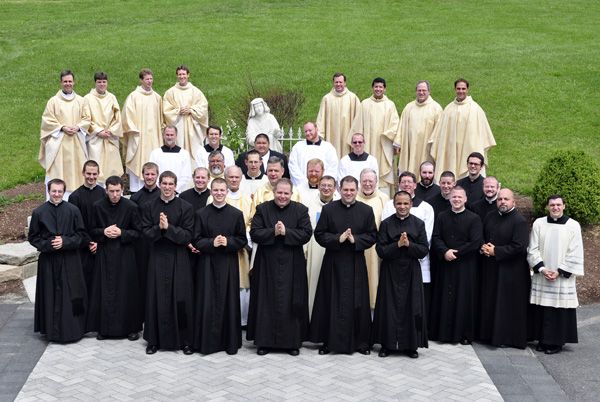 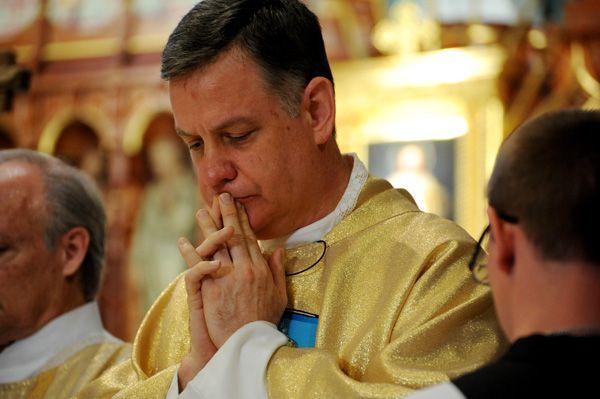 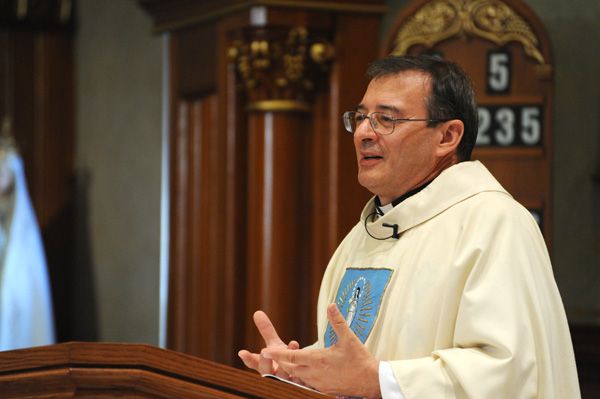 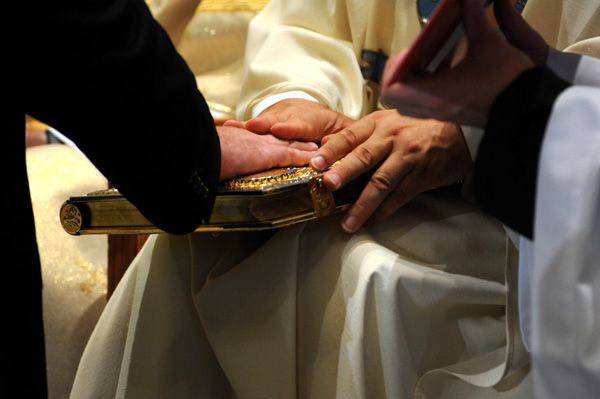 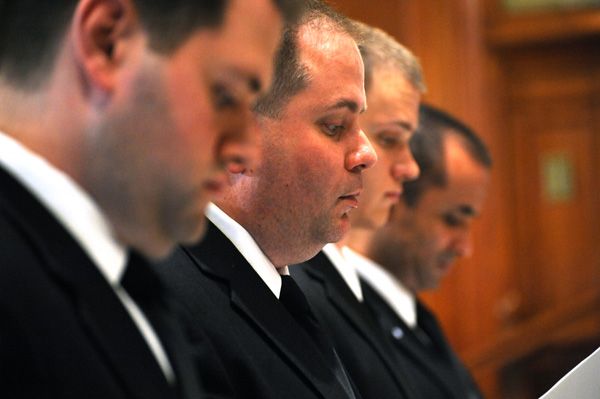 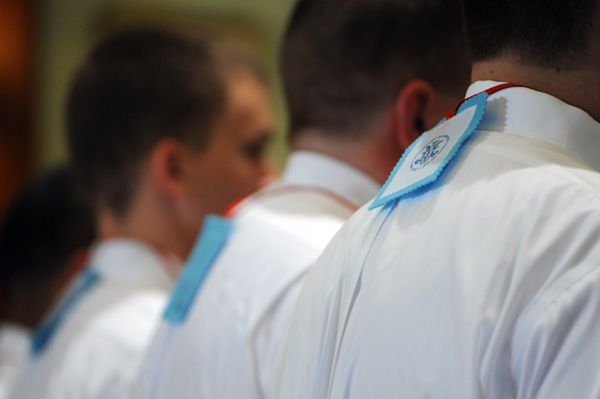 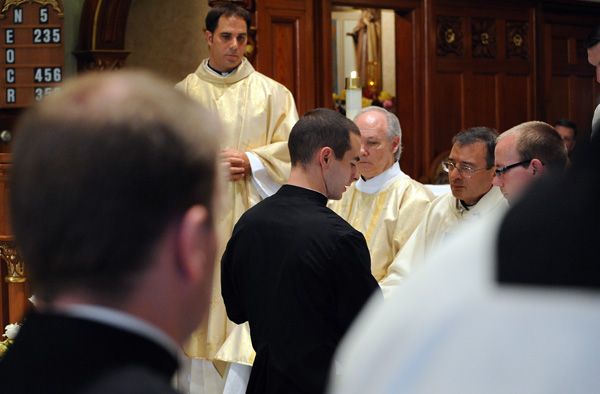 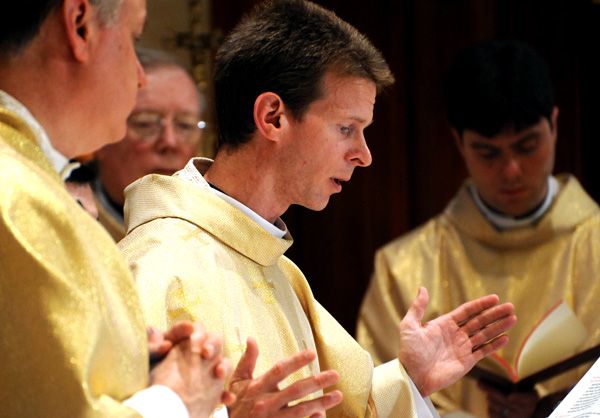 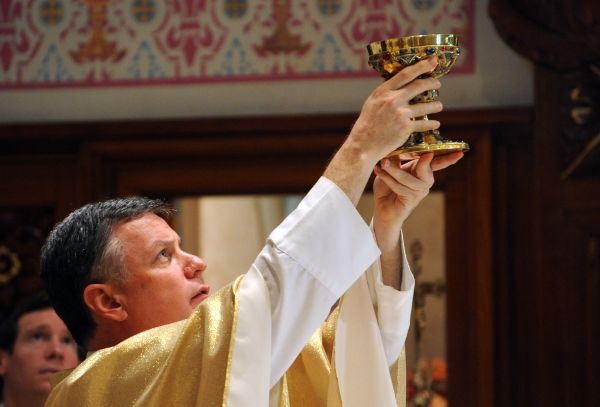