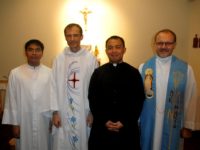 On August 25, 2012, the ceremony of solemn blessing was performed for the Marian Formation House in Quezon City (Metro Manila) in the Philippines. The ceremony was presided over and the blessing performed by Bishop Honesto F. Ongtioco, the Ordinary of the Diocese of Cubao. Among those attending the event were: Fr. Jan Migacz, MIC, Superior of the Asian Vicariate; Fr. Walerian Poźniak, MIC, Rector of The Divine Mercy Shrine in El Salvador City (Mindanao); Fr. Mariusz Janiszewski, MIC, Novice Master; and Fr. Mariusz Jarząbek, MIC, Prefect of Students and Superior of the residence in Quezon City.

The joy flowing from the opening of the new Marian post in the Philippines’ capital was shared by our friends, neighbors, and Polish missionaries (both male and female) residing in the vicinity of Manila, especially Sisters Handmaids of Mary Immaculately Conceived and Marian Sisters (Congregation of Mary Immaculate) whose delegations attended the event.