It’s getting difficult keeping track of the abundance of graces God is giving the Congregation of Marian Fathers of the Immaculate Conception these days.

“That was complicated,” said a beaming Fr. Joe Roesch, MIC, following a more than two-hours-long Mass at the National Shrine of The Divine Mercy on Thursday, Aug. 15.

Why so complicated? Let’s count the ways:

2. Another 16 men in formation renewed their vows.

4. Father Joe, himself, renewed his vows on this, the 25th anniversary of his first profession of religious vows.

To top it off, the vows ceremony was only part one of a two-day celebration of God’s graces upon the Marians. Part two — Friday, Aug. 16, at the National Shrine, in Stockbridge, Mass. — Br. Chris Alar, MIC, professes perpetual vows.

“To give perspective, when I made my vows 25 years ago,” said Fr. Joe, “I was the only one professing vows that day, and there were only a few seminarians. Now look at what God is doing in our little community. It’s obvious that the Lord is at work.”

“My heart is so filled with gratitude to God,” said the Very Rev. Fr. Kazimierz “Kaz” Chwalek, MIC, the provincial superior of the Blessed Virgin Mary, Mother of Mercy Province, which governs the Congregation throughout the United States and Argentina. “He’s brought so many faithful men who want to work for the Church and for Christ and who want to introduce those who don’t know that the message that God is real, that He loves us, and that He has a special future with us — a future with Him and with all the saints.”

The Marians now have about 30 men in formation in the United States, said Vocations Director Fr. Donald Calloway, MIC.

“They come from very diverse backgrounds and geographic areas,” Fr. Donald said, “but they are unified in their orthodoxy and their love for Our Lady and love for Divine Mercy, and many of them have had either a conversion to the faith or a reversion to the faith. So they have experienced something that has brought them into a deeper living of faith, and for many of them, that deep conversion experience is where they received their religious calling.”

Father Donald adds, “There’s a real camaraderie and fellowship among the guys. Even on their first day together it’s like they’ve known each other their entire lives.”

Three of a Kind
Three particular men who have a love for Mary Immaculate and zeal to spread the message of Divine Mercy can vouch for that. On Thursday, the three men professed their first vows as members of the Marian Fathers during Holy Mass on the Solemnity of the Assumption of the Blessed Mother into heaven.

With friends, family, and fellow Marians proudly looking on in a standing-room-only Shrine, Timothy J. Childers of Florida, and Christopher R. Orante and David G. Smith, both from California, professed their vows. Father Kaz accepted and confirmed their one-year vows on behalf of the Marians and the Church.

One by one and by name, the men stepped forward to recite the moving words of profession:

I, (name), for the glory of God and the honor of the Most Blessed Virgin Mary and all the Saints, in the presence of the entire Community, through your hands, most Reverend Father, vow to Almighty God in the Congregation of Marian Fathers of the Immaculate Conception of the Most Blessed Virgin Mary, according to its Constitutions, the three vows: of chastity, poverty, and obedience for one year. So help me God and this holy Gospel.

With the vows, they became Brothers Timothy, Christopher, and David, with the suffix “MIC” indicating their membership in the community.

Following the profession, Fr. Kaz proclaimed, “I earnestly commend you to God Almighty and to Mary Immaculate, our Mother and Patroness, that you may be able to joyfully and faithfully carry out your vows, unite with God, [and] attain holiness and eternal life.”

Father Kaz then presented the new brothers with the blue scapular. The blue scapular of Our Lady serves as a sign of honoring and imitating Mary, an invitation for the wearer “to give Christ … your undivided service in the Church.”

The three new brothers then processed to the sacristy where, for the first time, they donned ecclesiastic garments. The change of clothing — from the white shirts and black pants of novices to black clerical garb — symbolizes the putting away of the old life and the taking up of the new. Father Kaz prayed that God “remove from your heart the vanity of this world, which you renounced at your baptism. May the Lord vest you in ‘the new man,’ who was created according to God in justice and true holiness.”

The men then received an extended round of applause from those assembled, including the many Marians from around the world who came to celebrate and concelebrate the Mass.

A Glimpse of the Future Glory
It’s certainly no coincidence that the Marians each year schedule the profession of vows on or around Aug. 15, the Solemnity of the Assumption.

Indeed, Mary’s Assumption, in which she was raised body and soul into heaven, is a foretaste of what God has in store for each of us. Father Kaz, in his homily, noted that while the Assumption is a special time to honor Our Lady, it also provides an opportunity “to celebrate what God wants for us.”

Inspired by Mary, the ultimate witness and model of holiness, the newly professed Brothers Christopher, David, and Timothy say they desire to be models and examples to inspire others to holiness.

Following Mass, the assembly gathered in the Great Room at the Marian monastery attached to the National Shrine to enjoy lunch. The three new brothers each addressed the crowd, thanking them for their prayers and support. They also thanked Jesus, Mary, and Fr. Mark Baron, their novitiate master, family, and friends for bringing them through the year.

“As of right now,” said Brother Christopher, “this has been the best day of my life. Of all the moments of God giving mesomething, it finally felt great to give something back to Him.” 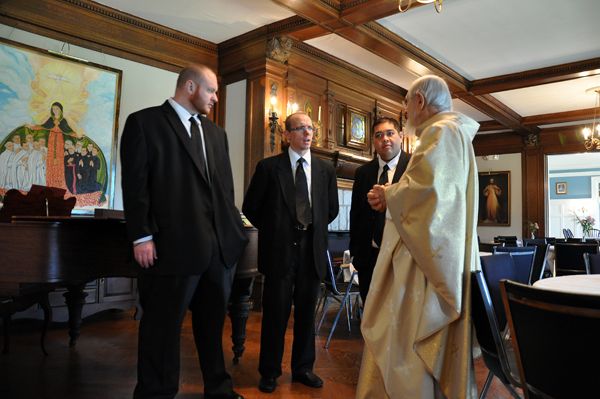 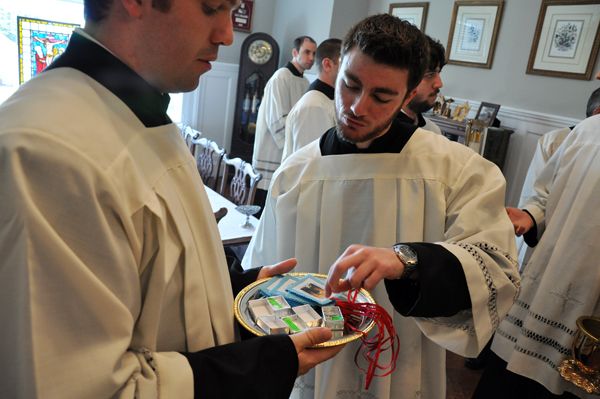 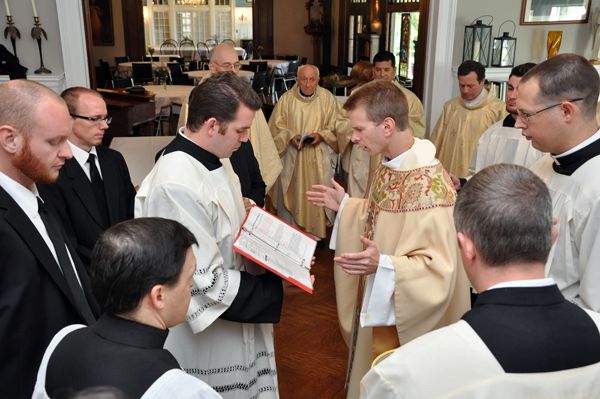 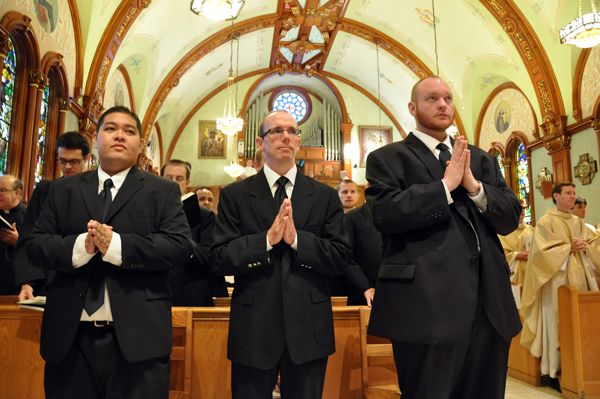 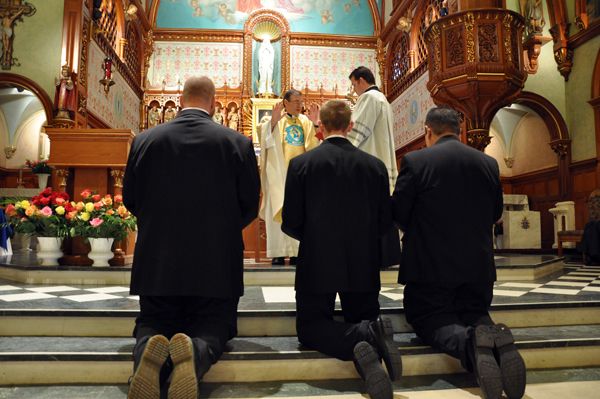 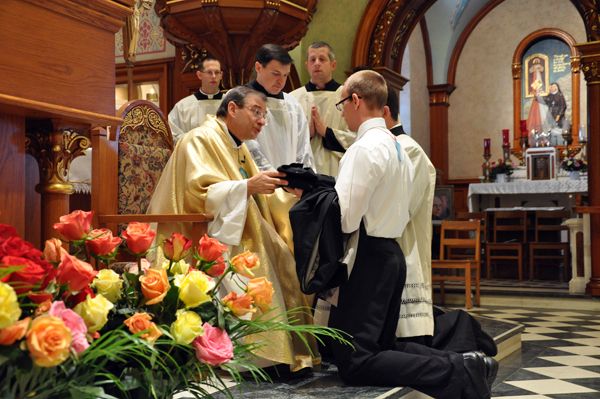 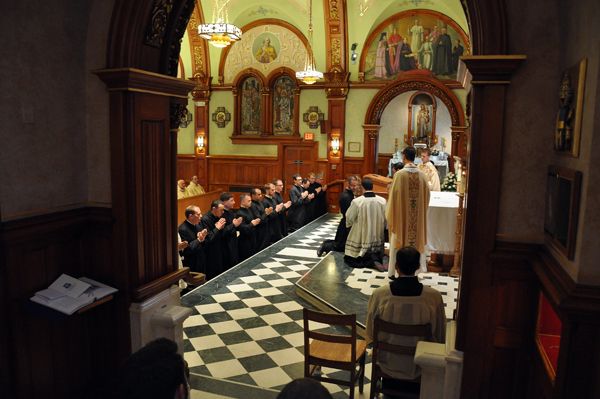 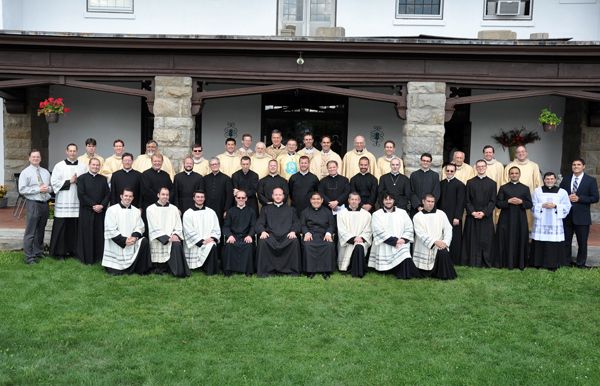 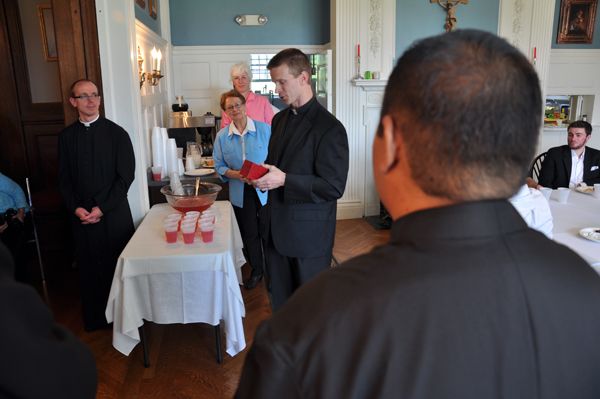 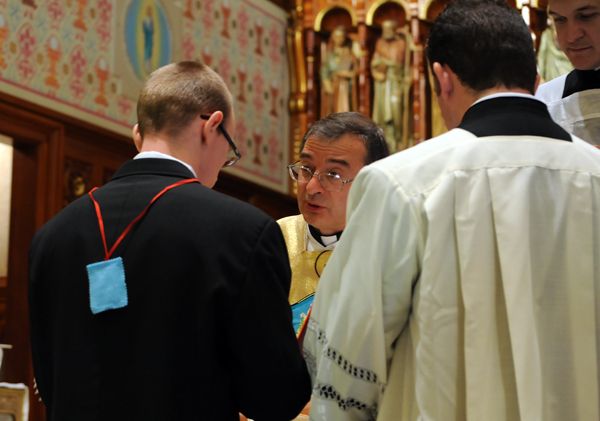 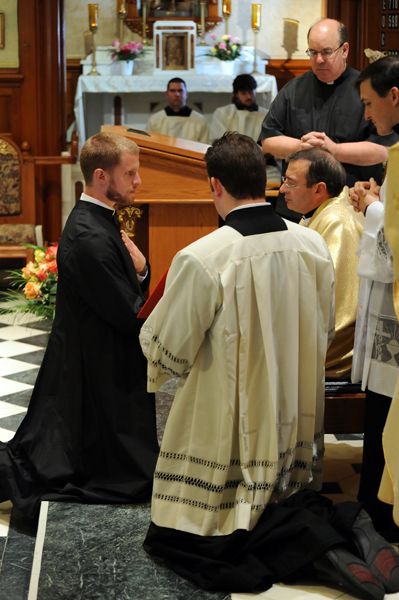 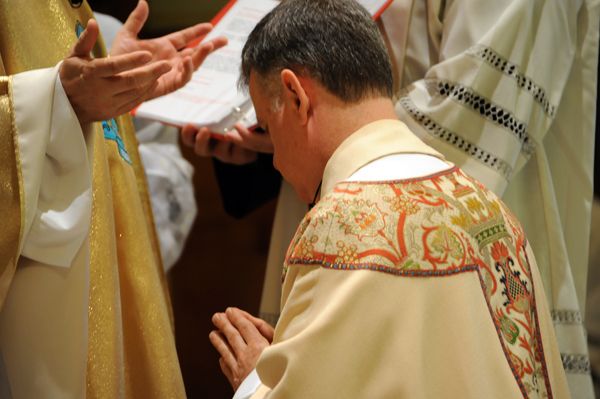 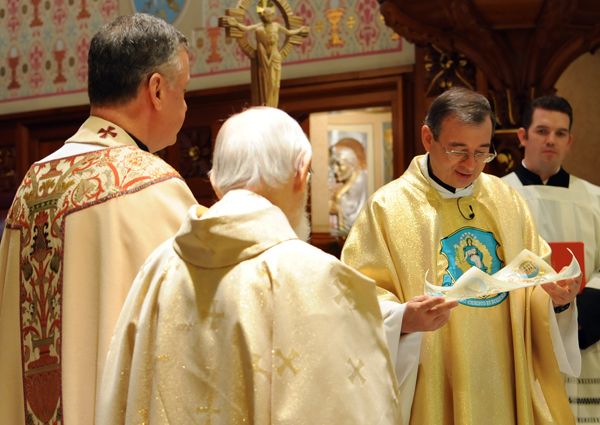 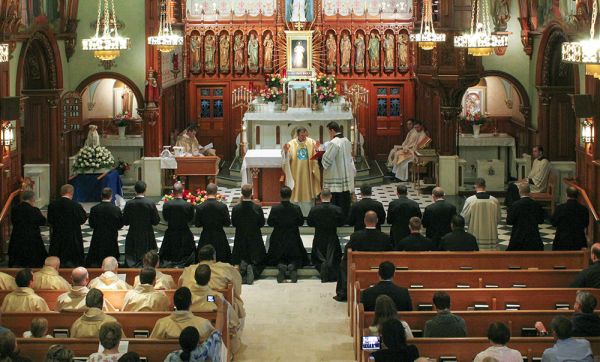 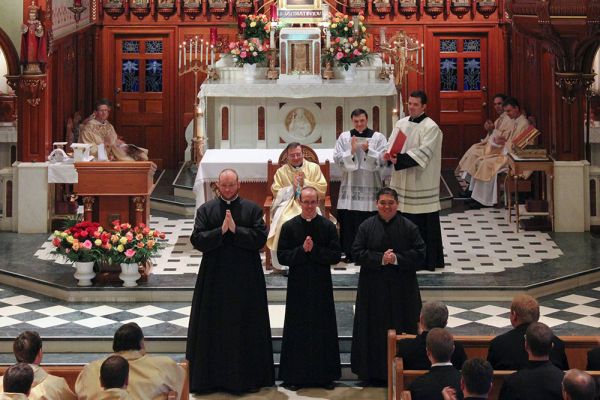