We wanted to join Pope Francis’s consecration of the world to Mary on Oct. 13, 2013, and entrust the entire diocese to the Mother of God. I went to the shrine with my Divine Mercy Animation Crew, a group of catechists who bring Divine Mercy to life through presentations and song.  During a three-day retreat, we evangelized, gave presentations about the apparitions, and shared the message of Our Lady of Fatima. Our heavenly Mother’s invitation to consecrate ourselves to her Immaculate Heart ignited in us a desire to immerse ourselves in the goodness and love through which we can conquer evil and Satan. About 500 people attended the retreat. It was a time of prayer, adoration, and celebration of the Eucharist.

On Friday, Oct. 11, we prepared for the celebration of the Sacrament of Reconciliation. In the diocese, there are many tribes that need unity and reconciliation. There is also a growing involvement in superstitions, including witchcraft and pagan rites, which are contrary to our Catholic beliefs. Therefore, there is a big need for conversion. The celebration of the Sacrament of Penance attracted many people, who fully took advantage of God’s mercy.

On Saturday, Oct. 12, we organized a three-hour procession around the city with the shrine’s statue of Our Lady of Fatima. Around 700 people processed, prayed the Rosary, and sang songs to Mary between the mysteries. Afterwards, a vigil Mass was celebrated, followed by silent adoration as part of the preparation for the act of consecration. We explained why the consecration is so important. After discussing the traditions of the Church, we emphasized the example of Blessed Pope John Paul II. During his apostolic visits, he entrusted each and every nation to the protection of the Mother of God. For us, the consecration meant loving and trusting God by entrusting our lives to Him through Mary.

The bishop, as well as many priests and nuns of the diocese, came to the Fatima Shrine for the Sunday celebrations to entrust the diocese to the Mother of God. More than 1,000 people attended the Sunday celebration, which lasted for three hours and included a procession, dances, and a performance of the apparitions of Our Lady of Fatima to the visionaries. Cameroonian children played the visionaries. A member of the Legion of Mary performed the voice of Our Lady. The act of consecration took place before the statue of Our Lady. Everyone was kneeling and repeating the prayer of consecration after the bishop, who then gave thanks and asked for future blessings.

On the same day, the bishop also visited the convent of the Poor Clares where he blessed a statue of Our Lady of Fatima, located in the grotto behind the convent’s walls. The Sisters provided pineapple juice made from fruit from their own garden. After the consecration, the Franciscan Friars, who are in charge of the shrine, held a party and potluck. 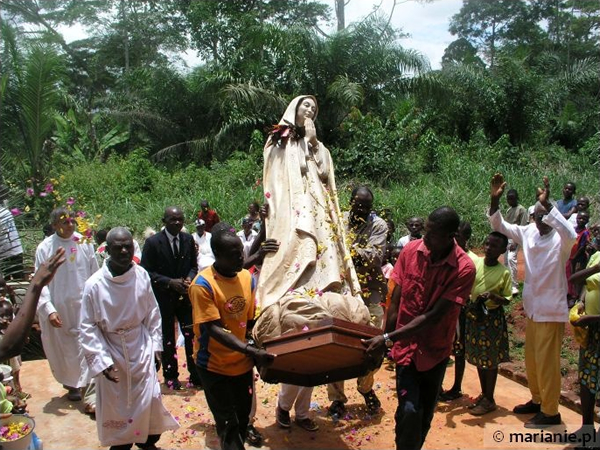 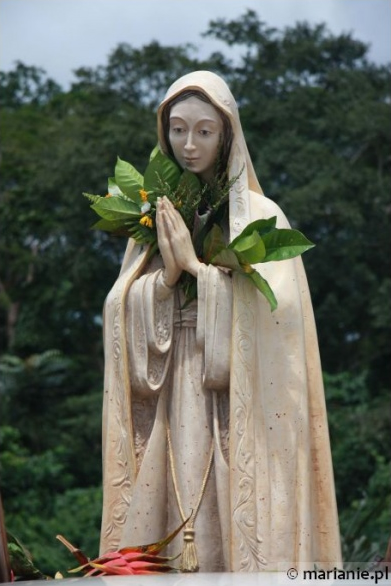 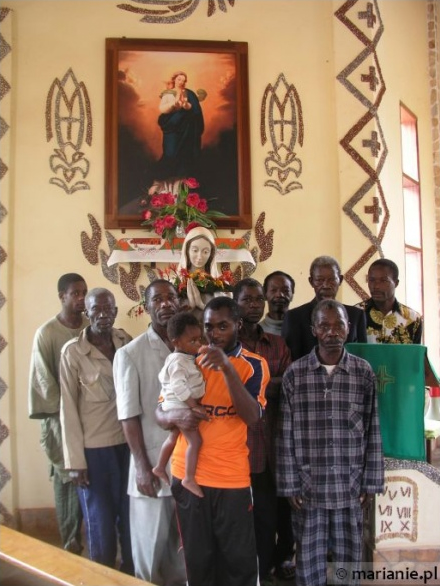 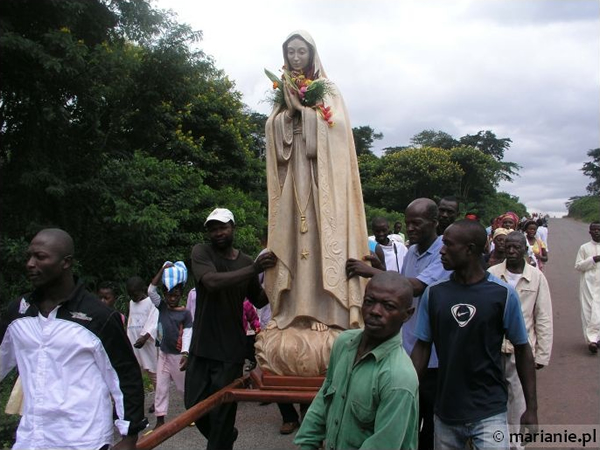 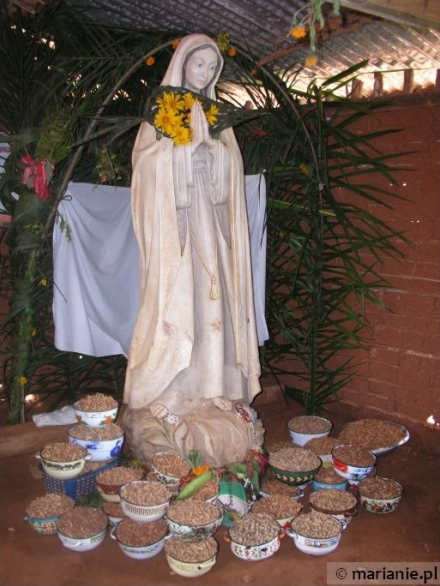