Skip to content
Poland: Communiqué on the Conclusion of the Diocesan Process for the Canonization of Blessed Stanislaus Papczyński

Poland: Communiqué on the Conclusion of the Diocesan Process for the Canonization of Blessed Stanislaus Papczyński

On April 30, 2014, at the seat of the Ełk Diocesan Curia, H.E. Jerzy Mazur, Bishop of the Diocese of Ełk, concluded the process about an alleged healing through the intercession of Blessed Stanislaus Papczyński, Founder of the Congregation of Marian Fathers of the Immaculate Conception of the Most Blessed Virgin Mary.

The case examined a person whose state, after a long period of intensive and comprehensive hospital treatments, was considered hopeless. Informed of this situation, this woman’s family and a few friends started reciting the novena through the intercession of Blessed Stanislaus for the health of the hospitalized woman. Her condition began rapidly improving already during the novena, so that she was soon transferred from the ICU and then left the hospital with no visible signs of damage to her health after the illness.

Following the decision of H.E. Jerzy Mazur, the Bishop of Ełk, the process opened Nov. 16, 2012. During the first session members of the Tribunal, which consisted of the delegate of the bishop, the promoter of justice, two notaries, courier of correspondence, and a medical expert, were sworn. They pledged under oath to faithfully fulfill the duty entrusted to them and to observe secrecy about the case itself, as well its progress and the persons involved. The Tribunal met 24 times over the course of one and a half years. During that time, the Tribunal interviewed – among others – the healed person, witnesses from her family, and personnel participating in her treatment. Medical records, appropriate copies, and translations were prepared. 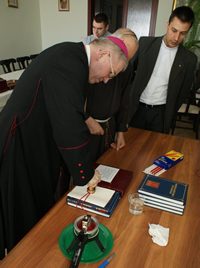 At the last, the public session on April 30, 2014, Bishop Jerzy Mazur recognized that the process was conducted in accordance with Church law. He thanked all those who participated in the process at its various stages for their reliable, accurate, and enduring work. All documents were placed in appropriate folders and then sealed. A part of the documentation will remain in the archives of the Ełk Curia: It cannot be opened without the permission of the Vatican’s Congregation for the Causes of Saints. Within a few days, copies and translations of the case documentation, as well as some other writings required by Church law, will be sent to the Vatican and submitted to the Congregation for the Causes of Saints. After the documentation is opened and the legitimacy of the Ełk process confirmed, the next stage – called the Roman stage – will begin. Church law demands keeping secrecy about the case under examination and the course of its legal actions.

It may be recalled that the beatification of Father Stanislaus Paczyński took place Sept. 16, 2007, at the Shrine of Our Lady of Licheń, which – on behalf of Pope Benedict XVI – was presided over by Cardinal Tarcisio Bertone, then Secretary of State of the Holy See. The beatification was based on the previously proclaimed heroic virtues and a miracle of healing of an ailing

mother and her unborn child. The process that examined that miracle was conducted in the Bishopric Curia of Ełk in 2003-2006, and then continued in Rome. The beatification ceremony was attended by approximately 100 cardinals, archbishops, and bishops; hundreds of priests and consecrated persons; and about 100,000 of the faithful who arrived to Lichen from all over Poland and various countries around the world, where the Marians serve pastorally. The group of people acquainted with the life, teachings, and work of Blessed Father Stanislaus continues to grow, along with a number of the faithful who are spreading his honor and turning to him in their various needs.

Let us thank the Lord for the gift of Blessed Stanislaus’s life and for the positively concluded diocesan process. Let us pray to the Holy Spirit so that we may continue to strive on the road to holiness, even as we leave to God’s will the continuation of this process.