Every year, our Marian Community in Cameroon joins in spiritual union with the whole Church, and especially our Congregation, in the observance of the solemnity of the Immaculate Conception of Blessed Virgin Mary. This year, we began our celebrations of the Immaculate Conception at 8:00 p.m. on December 7 with the solemn Eucharist in our new St. John Paul II Parish in Minkama. Although the formulary for the Mass on the second Sunday of Advent was used, we wanted to share the joy of this solemnity of the Immaculate Conception with our new parishioners, who could not come to the church on weekdays in such great numbers. During Mass, one of our seminarians, Emmanuel Habumuremyi, MIC, who is in his third year of theology, was introduced into the ministry of acolyte. Another seminarian, Joseph Mukasa Musoni, MIC, a first-year student of theology, received a white cassock with a sash, because this is the garb we wear in Africa. Father Krzysztof Pazio, MIC, Superior of the Cameroonian Vicariate of the Marian Fathers, presided over Holy Mass, delivered the homily, introduced into the service of acolyte, and clothed our confrere in the white cassock. In his homily, Fr. Krzysztof spoke, among others, about the meaning of the ministry of acolyte and the importance of religious garb, briefly referring to our Congregation’s history concerning the replacement of the white Marian habit with the black cassock. The Mass was attended by all our clerics from the Marian House of Formation led by the Prefect, Fr. Paweł Rawski, MIC, and Br. Lukasz Wierzchowski, MIC. Before giving concluding blessing, the vicar, Fr. Cyrille Bounoungou, MIC, invited the new acolyte Emmanuel and Joseph, in his new cassock, to do the dance of thanksgiving in front of the altar. Our dancing confreres were quickly joined by the parishioners, among whom was also Madam Mayor. After Mass, we all went to a provisory rectory for refreshments after which we drove back to Ngoya for lunch. In the evening, our confreres from Atok: Fr. Francis Filipiec MIC, Fr. Grzegorz Myłek MIC, and Fr. Grzegorz Leszczyk MIC, joined us there. Our patronal feast officially began on with Vespers on the evening of December 7, during which the letter of Fr. General Andzej Pakula, MIC, was read aloud. The next day, December 8, we spent together the whole day in celebrations: in the chapel, in the refectory and in the recreation room, alternately. Confreres from Atok stayed until after lunch on December 9 because being together felt so good. In total there were 17 of us, Marians: 6 priests, one religious brother, and 10 seminarians. This is an impressive number, considering that 15 years ago there were only two Marians in Cameroon. We hope that next year we will celebrate in a larger group. 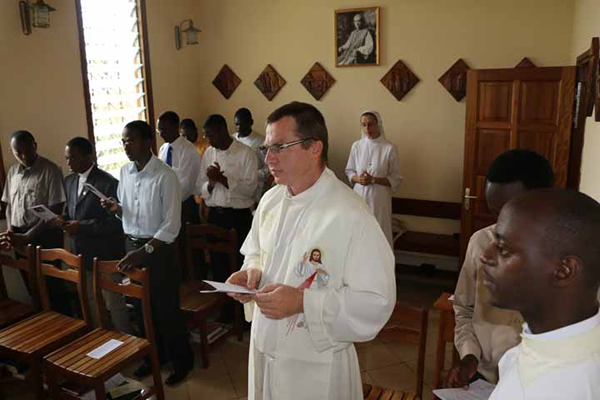 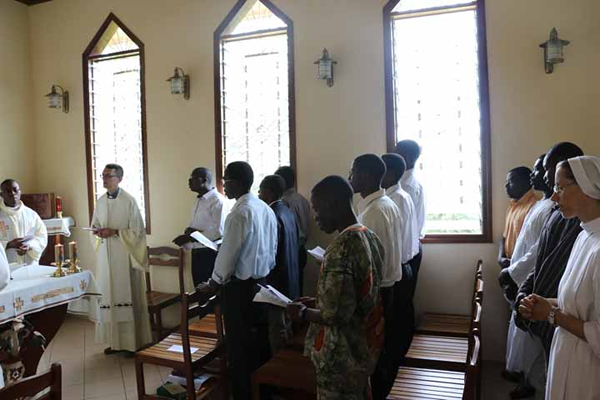 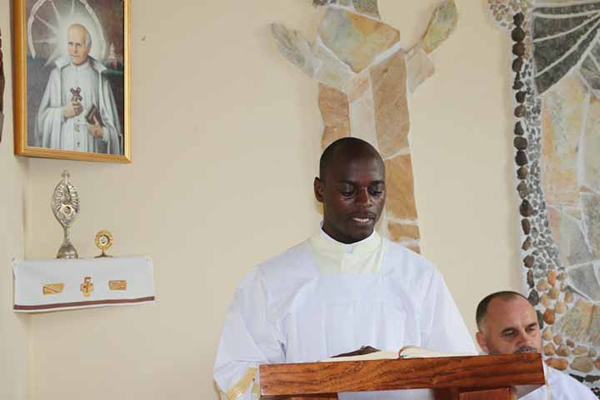 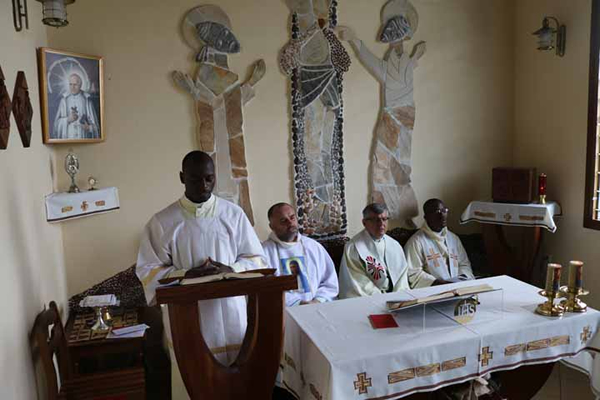 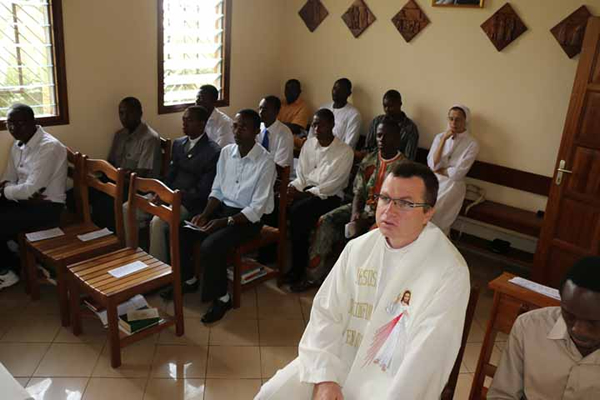 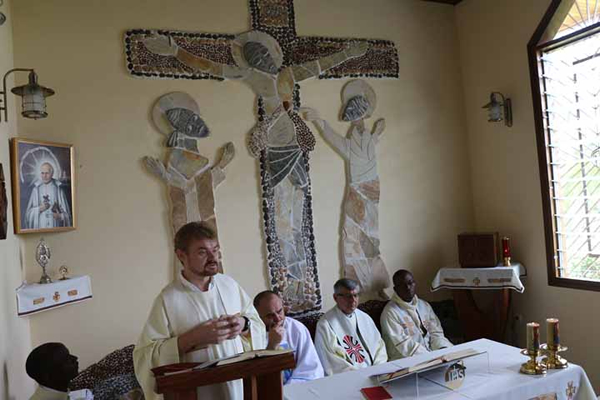 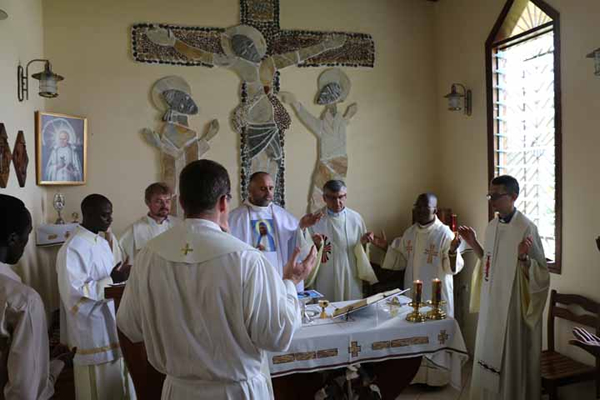 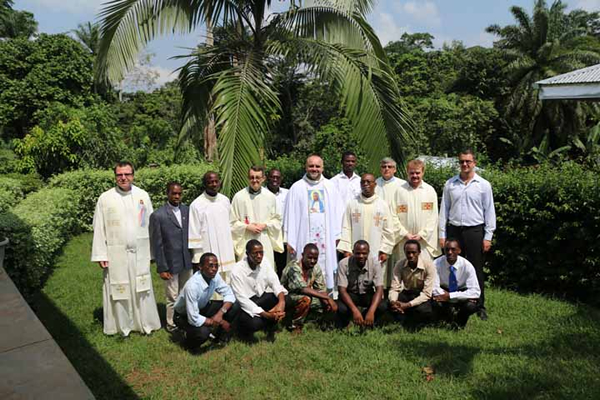 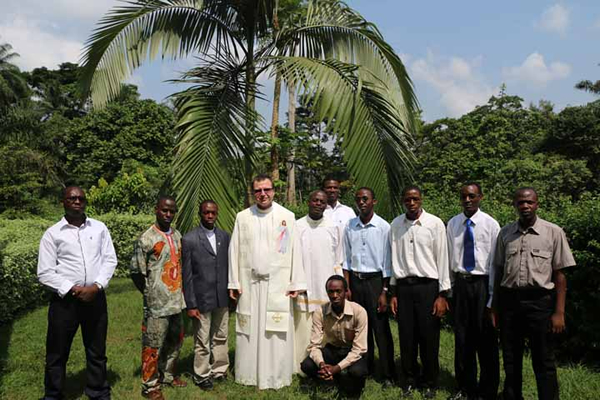 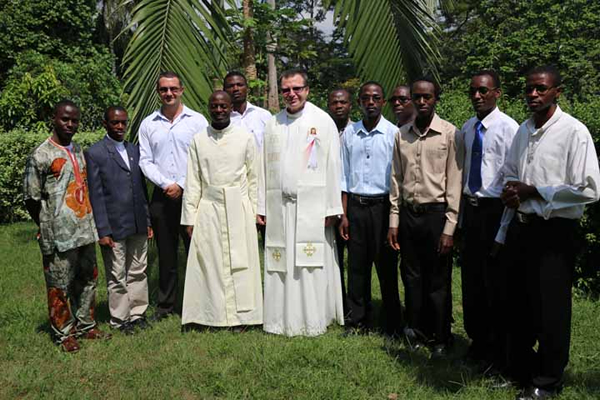 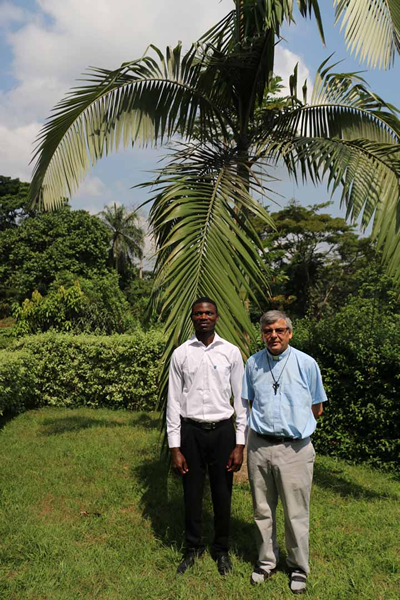