On April 20, 2015, at approx. 9:20 in the morning, our confrere, Fr. Piotr Smolinski, a Marian, aged 51, died suddenly, probably of a heart attack. At 7:30 a.m. he celebrated Mass at the Sisters of the Resurrection, ate breakfast, and went home. His coming back was slow, and when he stopped at the parish office upon his return, he grew faint, lost consciousness, fell, and died, despite the first aid and rapid medical intervention of ambulance attendants. I witnessed the fight for his life and his death; I anointed him with holy oils and prayed all the time to the Lord for saving him, but the Lord called him to Himself. Yesterday evening we celebrated Holy Mass in Fr. Piotr’s intentions preceded by the Rosary. Every day until his funeral we will pray for the eternal salvation for him. I am sending a picture of Fr. Dr. Pior Smolinski, MIC, which was taken Sunday, April 19, 2015, during Mass at 1:00 p.m., when he baptized several children. Father Piotr did not like being photographed, but he agreed on this occasion, because he was baptizing the son of our former sacristan Mr. Wojtek Kopański, who is the author of this photo. We are waiting for the coroner’s decision in regard to a possible autopsy of our brother’s remains, then we will inform about the funeral arrangements for the late Fr. Piotr, first in Ealing, London, and then in Poland.

Father Dr. Piotr Smoliński, MIC, worked in the parish of the Blessed Virgin Mary “Mother of the Church” in London, Ealing, for nearly six years. He was in charge of the group of Ministers of the Eucharist, which formed and educated with great love and respect for the presence of Eucharistic Christ. He prepared parents for the sacrament of baptism through specially organized for them theological and existential catechesis, as well as liturgical catechesis; he baptized the children almost every Sunday Mass, celebrated at 1:00 p.m. During his ministry in Ealing, he gave the sacrament of baptism to more than 1,000 children. He prepared the adults for the Sacrament of Confirmation, by organizing two-three times a year a series of at least 10 catechetic sessions. He claimed that he met in these sessions with true seekers and followers of Christ, whom he liked to initiate in the life of the Church. He led two conjugal groups called “Teams of Our Lady,” was the presbyter of a neo-catechumenal community with which he celebrated his last Passover on Holy Saturday. On June 3rd of this year he would have celebrated his 25th anniversary of the sacrament of Holy Orders. In this year Holy Week, he celebrated at the church in Ealing the Liturgy on Good Friday, speaking with love about the cross of Jesus Christ and conducting beautifully the ceremony. He had a passion for imparting philosophical and biblical knowledge, and during the past three years he conducted biblical catechesis and meditations on the Lectio Divina every Sunday at 4:00 p.m. We all greatly miss Fr. Piotr and give our heartfelt condolences to his parents Ewa and Eugeniusz, to his siblings, and members of the Marian community. 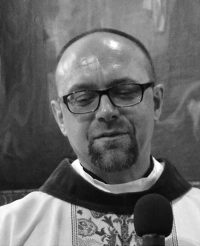