Skip to content
Cameroon: Renewal of religious vows in Ngoya

On Saturday, Aug. 22, 2015, the little chapel at the Formation House of the Marian Fathers in Ngoya was bursting at the seams. During Mass, six Marian brothers, all seminarians, renewed their temporary vows for another year. Present during this significant event were: the Very Rev. Fr. Krzysztof Pazio, the Vicariate Superior; Frs. Cyrille Bounoungou, MIC, and Francis Filipiec, MIC; Br. Joseph Musoni, MIC, who will renew his vows on Sept. 8, 2015; and three Marian candidates — Arsene, Borel, and Julien — now preparing to start their postulancy in Rwanda. The Marian brothers were also supported by the prayers of two Carmelite sisters of the Infant Jesus, Ida Bujak and Agnes Ntahonkuriye, as well as Mira Majdan, a volunteer from Poland, and Paolo Cicchito, an Italian friend of the Marian mission. The community gathered for the Eucharist brought together representatives of five countries — Burundi, Cameroon, Poland, Rwanda, and Italy — brought to mind words from a prayer with which the Marians begin their mornings: “Who through the diversity of all tongues have brought the nations together in the unity of faith.”

After the homily, in which Fr. Krzysztof Pazio spoke about the simplicity and humility of Our Lady, among other things, the Marian brothers Leon Gwaneza, Felix Uwimana, Rogatien Ntsana, Alfred Nyiobuhungiro, Cedric Ishimwe, and Christian Munyaribanje knelt in turn before the Vicariate Superior. Placing their hand on the Bible, each recited the formula of vows. Next, at the altar, each brother signed his document of vows, which was witnessed by Frs. Cyrille and Francis. This ceremony occurred in a warm, family-like climate. Both brothers and priests radiated with joy. At the end of Mass, Paolo initiated a round of traditional Italian applause.

The communal joy was augmented by the subsequent common recreation, in which conversations were simultaneously conducted in several languages. Sister Agnes, a native of Burundi, proved to have a surprisingly good command of Polish, and thus awakened in the Marian candidates a desire to learn the language. At dinner, a local specialty was served — a perfectly prepared kanga fish, which could satisfy the most fastidious palates.

The construction of a new, larger chapel at the formation house is presently being completed. Considerable interest among young Africans for the charism of the Congregation of Marian Fathers lets us hope that this chapel will soon fill up with new Marians. 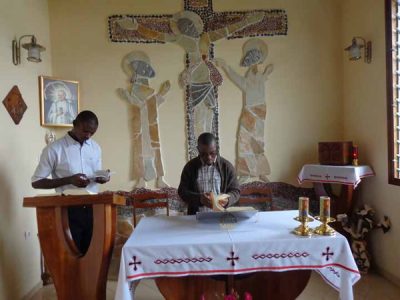 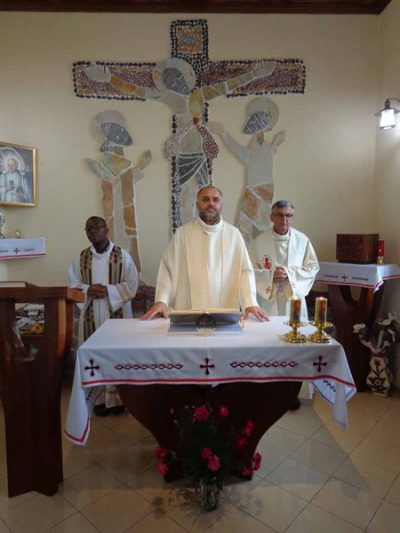 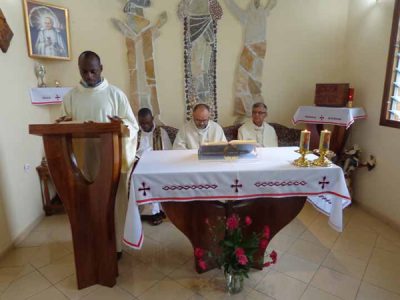 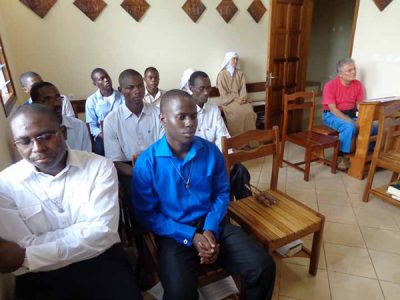 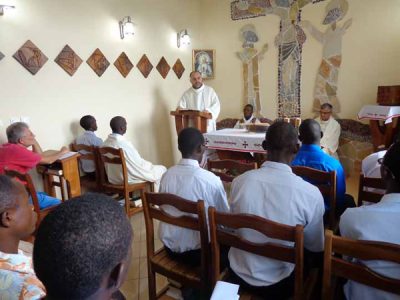 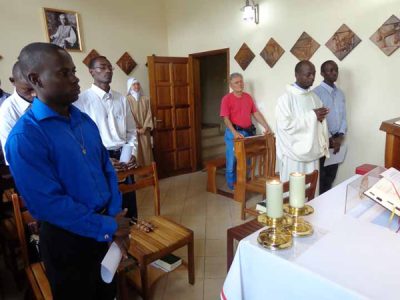 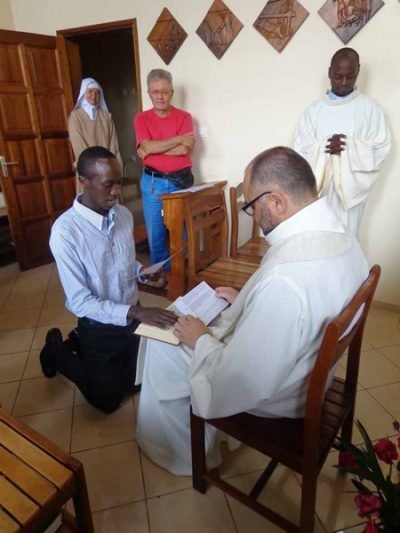 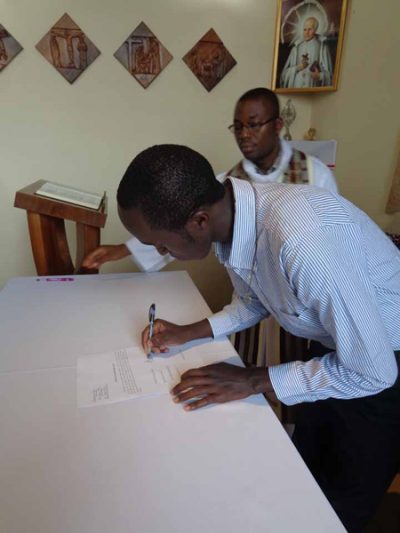 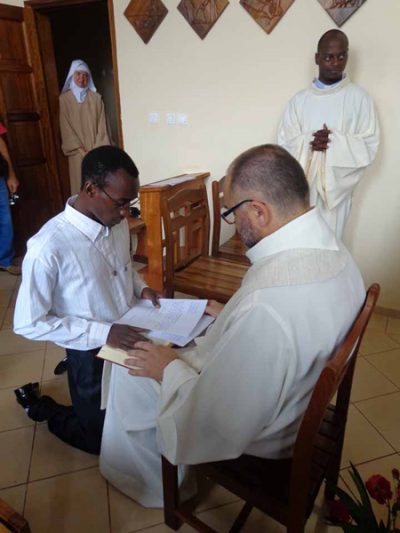 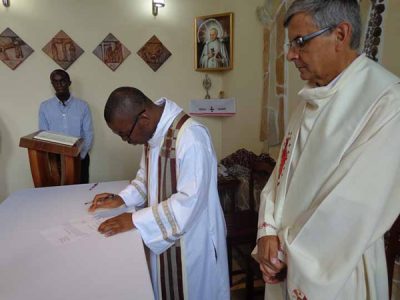 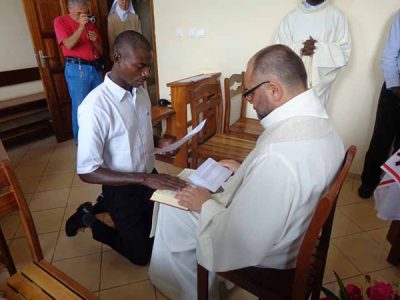 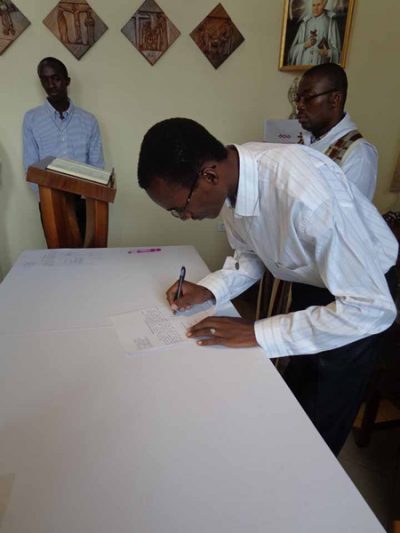 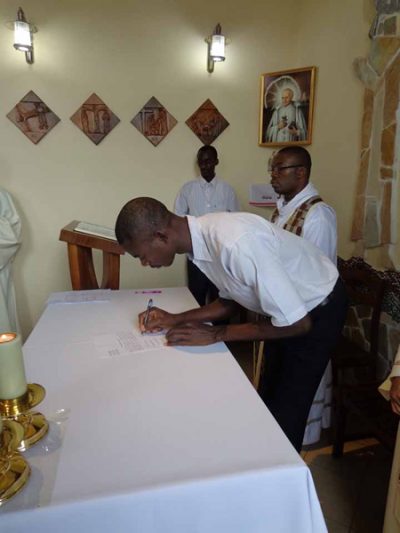 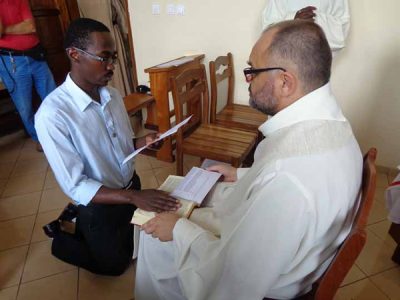 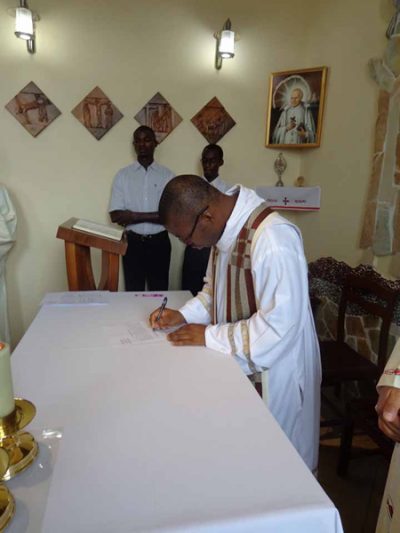 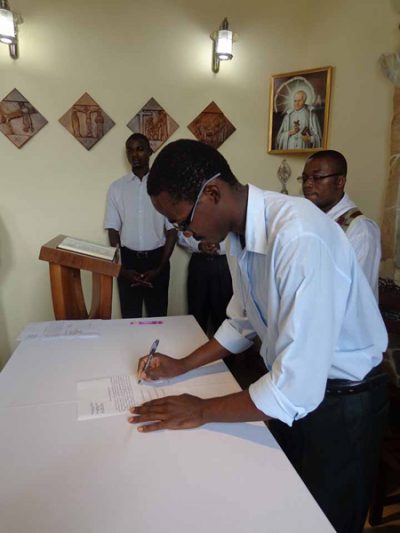 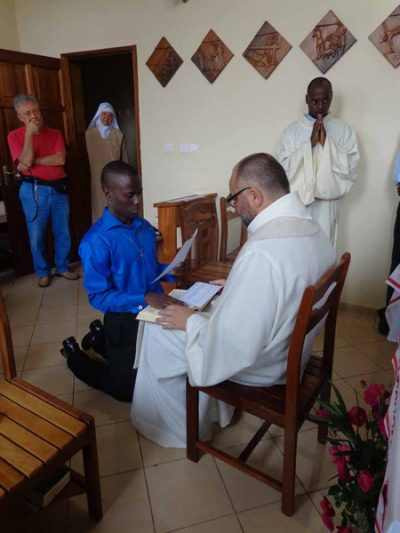 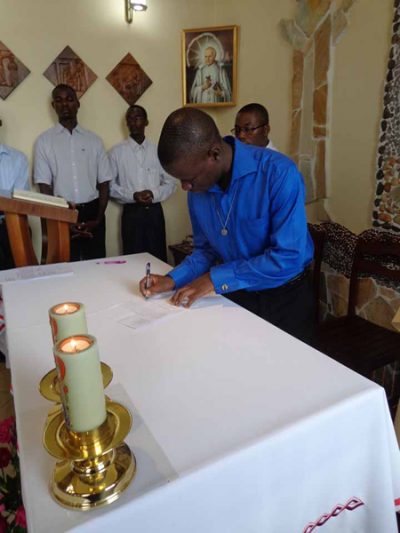 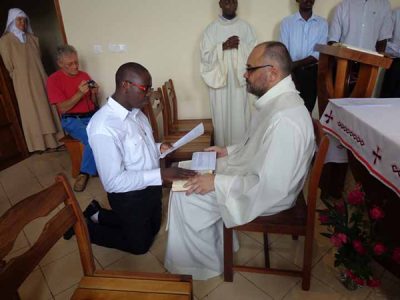 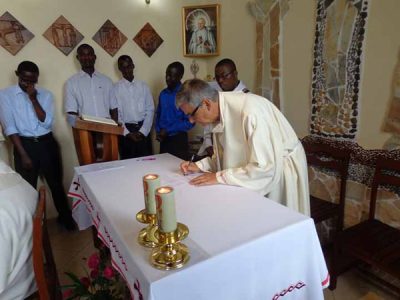 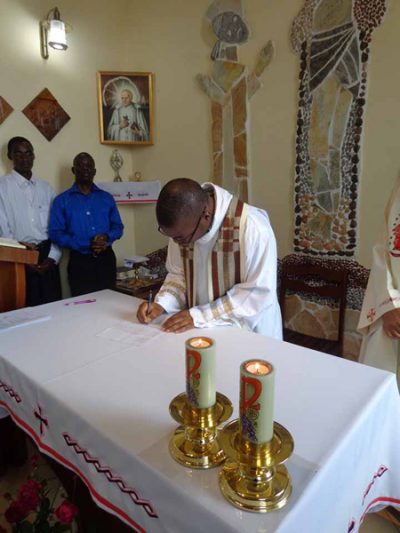 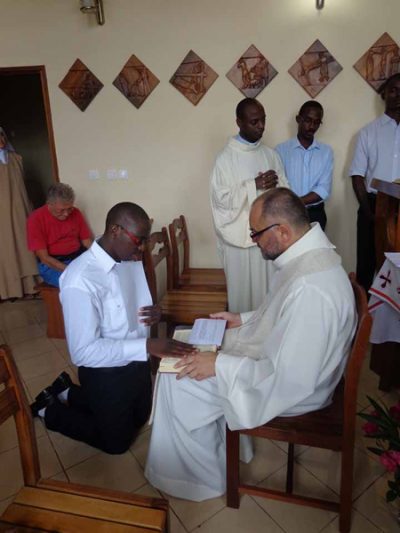 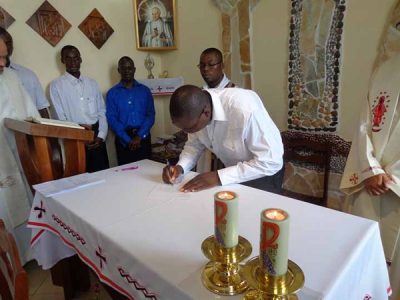 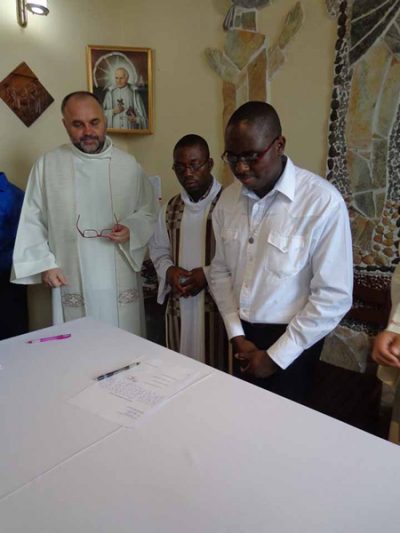 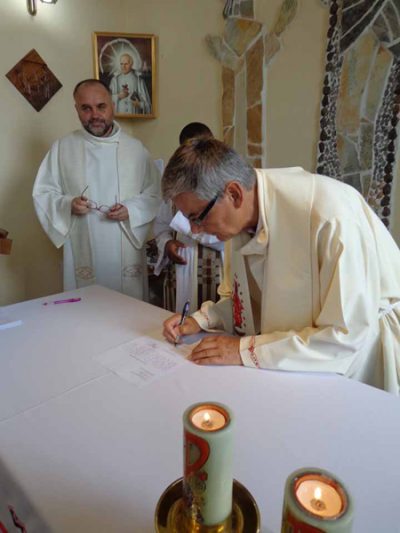 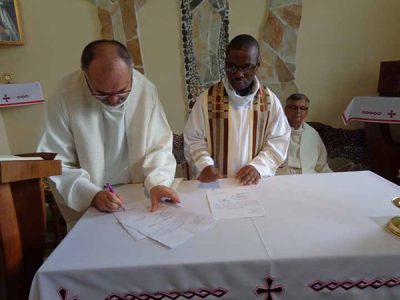 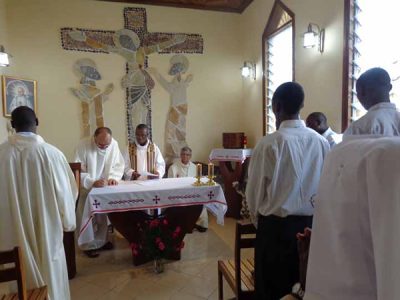 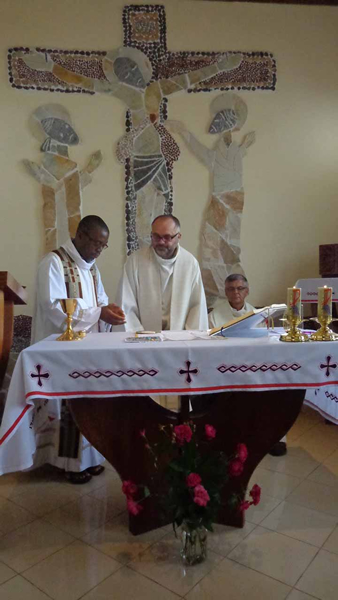 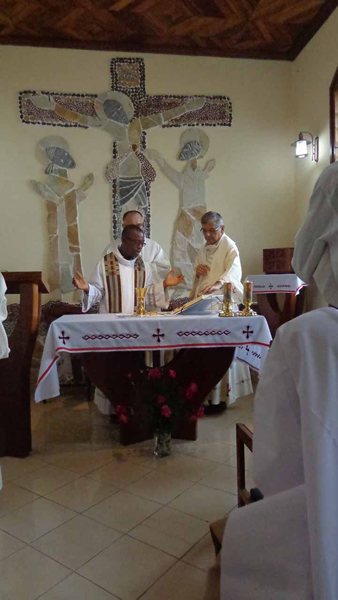 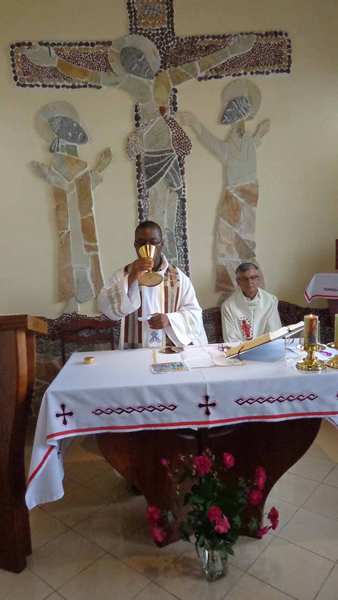 On behalf of the General Government of the Congregation and the Website editors, we wish to our visitors that the Christ Child richly bless them all with an abundance of His peace, love and joy. May you experience more of His joyful presence in your heart as you celebrate His holy and blessed birth in Bethlehem. And may Our Lady, the Mother of Jesus nurture and protect you and your loved ones throughout the New Year of 2020.