On Sept. 17, 2016, the Divine Mercy Shrine in El Salvador City near Cagayan de Oro in the north of Mindanao Island hosted the main celebration of thanksgiving for the grace of the canonization of a new saint – the Founder of the Congregation of Marian Fathers, St. Stanislaus Papczyński.

The celebration was presided over by Archbishop Romulo T. Dela Cruz, Metropolitan of Zamboanbga, a place of recent political and religious conflicts. Led by the Asian vicariate superior, Fr. Dariusz Drzewiecki MIC, all the Marian Fathers currently working in the Philippines attended the ceremony. (Today, there are 8 Marian missionaries working in the Philippines: 7 Poles and one American, of which 7 are priests and 1 is a religious brother. The Marians, together with numerous diocesan priests and delegations of religious communities, such as Polish priests from the Congregation of the Sacred Heart from Cagayan de Oro, as well as the lay faithful, whose numbers exceeded 2,000, crammed the local shrine. 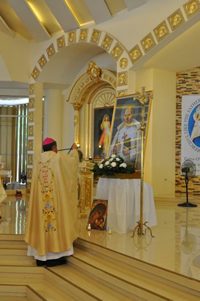 In his homily, the archbishop spoke about the person of the new saint and encouraged all to follow the example of his holiness. He also spoke of St. Stanislaus Papczyński as a model for Filipinos, demonstrating how to bravely imitate the virtues of Mary Immaculate; to persevere in trusting prayer, especially for the souls in Purgatory, and to sacrificially commit to providing spiritual and material assistance to those in direst need. The archbishop mentioned the miracles recognized in the beatification and canonization processes, which were granted through the intercession of the saint, and encouraged his listeners to pray for St. Stanislaus’ intercession in life-threatening situations, including for unborn children. After Mass, the faithful had the opportunity to venerate the relics of the new saint and to receive souvenirs with prayers and novenas in English and Bisaya languages. The archbishop blessed a statue of the new saint, which is located near the Marian Fathers’ religious house.

A similar ceremony, although on a smaller scale, took place on Aug. 21, 2016, at San Pedro Bautista Shrine Parish in Quezon City. The Marian Fathers’ formation house is located within this vast Franciscan parish. Holy Mass organized for the residents of the capital region of Manila was presided over by the Most Reverend Honesto Ongtioco, bishop of Cubao. The ceremony was also attended by lay members of the Association of Marian Helpers. 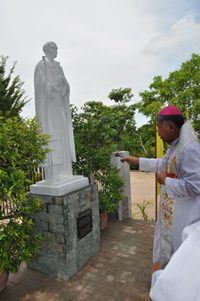 Both events provided vast opportunity for learning more about the new saint and became the incentive to pray for new priestly and religious vocations to the Marian Fathers in the Philippines and throughout Asia.