On June 5, 2016, Pope Francis proclaimed a Saint of the Catholic Church the Founder of the Congregation of Marian Fathers. Since that day, devotion to St. Stanislaus Papczyński developed on a scale that has surprised even his most devout venerators.

For many years, holy Fr. Papczyński, who lived more that 300 years ago, remained a mysterious and little known character. All this has changed recently since this Saint has “reacquainted” himself with the faithful, by obtaining from God many miracles and extraordinary graces. His canonization process not only led to the elevation to the altars of the Marian Founder – the event eagerly awaited for over three centuries – but also brought closer to the faithful the person of the new Saint and his teaching, so very relevant for our times. The numerous testimonies about graces granted through the intercession of this saintly Father were collected and published as a book entitled Miracles and Graces Granted Through the Intercession of St. Stanislaus Papczyński. Pregnant women, couples trying for children, the sick, the suffering, and those in difficult life circumstances can count on Fr. Stanislaus’s particular regard.

Since the canonization, many inexplicable phenomena have come to pass practically in every place where the Marian Fathers minister. One of them was the healing of a baby in his mother’s womb that occurred in the Philippines. Several independent doctors declared the unborn child to be in the death throes and recommended immediate termination of the pregnancy. The woman, however, would not agree. She obtained from a Marian missionary the relic of St. Stanislaus Papczyński. She held it in her hands and also placed on her belly as she recited the Novena through his intercession. And then she gave birth to a healthy child, something that the doctors were not able to explain, as Fr. Andrzej Pakuła, MIC, General Superior of the Marian Fathers has told us.

Devotion to St. Stanislaus Papczyński is popular among the Cameroon youth.

The custodian of relics of St. Stanislaus Papczyński received such a great number of requests for relics that a number of applicants had to be placed on a waiting list. The letters arrived from all over the world, i.e., from the U.S., the Philippines, Cameroon, Kazakhstan, Latvia, Slovakia, and the Czech Republic. The most recent ones came from India, Brazil, and Vietnam. The Novena to St. Stanislaus has been translated into many different languages. The first parish in the world placed under the invocation of St. Stanislaus Papczyński was opened on Sept. 18, 2016, in a town near Kigali in Rwanda. School and college students in the Philippines chose him as their patron for the most difficult exams. Prior to going to the health center for delivering their babies, pregnant women from the Nyakinama parish in Rwanda stop before the statue of the St. Stanislaus Papczyński, asking for help for themselves and good health for their babies. 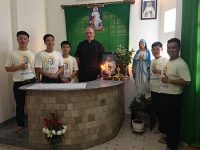 Devotion to Saint Stanislaus among the Vietnamese.

The novena to St. Stanislaus Papczyński enjoys great popularity in Poland. More than 91,000 people visited the Novena page on the site of the Association of Marian Helpers in Poland. Two films were produced for the canonization: Father Stanislaus’s Cenacle and Saved to Save the Others. Thanks to various TV stations, as well as many DVD’s, more than 2 million people saw these movies. Five thousand guests visited the Góra Kalwaria museum dedicated to the new Saint. During a three-month period, the faithful coming to pray at St. Stanislaus’s tomb filled with their names and notes the entire visitors’ book that previously was sufficient for a number of years. The combined releases of books about the holy Fr. Stanislaus numbering nearly 150,000 copies were completely exhausted.

We can talk about a true devotion to a saint only when the faithful consciously choose to imitate his virtues, – said Fr. Wojciech Skóra, MIC, Custodian of St. Stanislaus Papczyński’s tomb in Góra Kalwaria. – And this is already happening. Our pilgrims tell us: “Father Papczyński had to overcome so many obstacles in his life, but he always trusted in God, in every circumstance. I would like to do the same.” 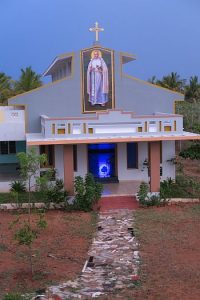 Image of St. Stanislaus Papczyński at the entrance to the chapel of the House of Studies in Karumathur, India.

On the first anniversary of St. Stanislaus Papczyński’s canonization, the Association of Marian Helpers cordially invites everyone to participate in a joint Novena. It will begin on June 5, 2017, with the Holy Mass celebrated at 7:00 p.m. at the Church of Our Lord’s Cenacle in Góra Kalwaria. All intentions submitted via the Internet will be delivered to Marianki in Góra Kalwaria and placed at the tomb of St. Stanislaus Papczyński. It was in this very church that a dead young girl was resurrected during Mass celebrated by the holy Fr. Stanislaus in the 17th century. Many pilgrims, who visit the Church of Our Lord’s Cenacle, which holds the tomb of St. Stanislaus Papczyński, regard this church as a shrine, although officially this title has not yet been granted.