Skip to content
The Profession of Perpetual Vows of Br. John Luth, MIC 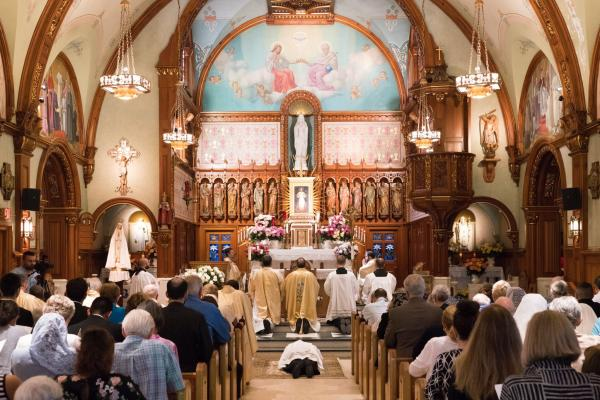 If you’ve ever been to the National Shrine of The Divine Mercy in Stockbridge, Massachusetts — amid crisis looking for answers, in consolation praising God for His goodness, or anywhere in between — chances are, you’ve met Br. John Luth, MIC.

Many-a-day since he joined the Marian Fathers more than 10 years ago, he has stood at the doors of the Shrine before daily devotions and Holy Mass, welcoming pilgrims: consoling the sorrowful, celebrating with the joyful, offering them prayers and a kind word.

He also makes sure that whenever a pilgrim has a story to share, testifying to how God’s mercy transformed their lives, that it reaches the ears of the writers at the Marian Helpers Center, often finding its way into newsletters, websites, magazines, and books of the Marians all over the world.

On Aug. 14, 2018, at the same Shrine at which he so fondly welcomes pilgrims, Br. John professed his perpetual vows of chastity, poverty, and obedience, thereby sealing his fate as a lifelong member of the Marian Fathers of the Immaculate Conception.

Like the many pilgrims he greets nearly every day, Br. John has a compelling story of his own to tell.

John was born in Providence, Rhode Island, grew up a cradle Catholic to devout parents, and later began his career as a schoolteacher. But he quickly learned teaching was not his gift. After reading a book about a nun who discovered a calling to become a nurse, he discerned his own call to study nursing.

He remembers, “I heard God saying, ‘You’re going to be a nurse.’ I tried to avoid it. But I was not settled — I was floundering, and was wasting time. God put me in the belly of a whale until finally I said, ‘OK, OK, OK.'” Within six weeks of my application to nursing school, I was accepted. Soon, upon returning from assignment overseas, he was immersed in courses at St. Joseph Hospital School of Nursing in North Providence, Rhode Island.

“About a year into my first assignment as a new registered nurse, I was thanking God for leading me into this work,” he said.

With his kind heart and gentle demeanor, John excelled as a psychiatric nurse for more than 20 years. But he still felt as though something was missing.

“Years and years later, I was tired of my own thoughts,” he said.

He decided to go back to school once again, this time for theology at Providence College.

“I loved to talk about God,” he said. “I figured it would be easy. [But] it was the hardest thing I had ever done.”

Then, he experienced a profound deepening of his faith after reading The Seven Story Mountain by Thomas Merton for class.

“Every night I came home, ate dinner, settled in my chair, and I read that book. I hated it when it was over,” he said.

Inspired by Merton’s story, John knelt at the side of his bed to ask God not to let this new feeling to go. “If I had not done that, this book would have been just another book I had read,” he said.

“I realized I wanted to be a Trappist, but by then I was ‘too young.’ They didn’t want anyone who was as ‘young’ as I was,” he joked.

Though he could not join the Trappists due to their age requirements, he knew that God had something in store for him.

“I said, ‘Ok God … if you want this, it will take care of itself,'” he said. He admitted that he never talked so boldly, so it must have been God’s voice. Therefore, he mustered up enough courage to approach his parish priest about going to seminary.

This priest encouraged him, telling him that he ought to prepare himself for seminary, meaning that John would have to sell his house.

Now, John did not own just any house. He lived in his grandmother’s colonial cottage in Warrick, Rhode Island — a home he had loved dearly since childhood, full of generations of family memories and possessions.

Believing he had the most illustrious house in all Rhode Island, as he would later joke with his seminarian peers, he struggled to part with these possessions.

At one point, he made up his mind that he would make his home into a type of hermitage. He thought that maybe he could serve the Lord and have his things.

“One day, I was moving books into a new bookcase. I had a big stack, I carried them under my chin, I remember,” he said. Walking with these books piled high in his hands, he felt as if a hand suddenly pressed against his chest. Then he heard an inner voice say, “You’re not staying here. Do you get it?”

He put the books down, called his priest, and agreed to continue with his discernment.

“It was a long haul from there. It took four years to get into seminary,” he said.

He suffered rejection several times from various orders mostly because of his “young” age. But he allowed these trials to reignite his passion for nursing.

“When I went back to my work I said, ‘Yes, God, this is why you’re rejecting me. You’re not going to let me go to seminary until I become a good nurse,'” he said.

So he worked at being a better nurse.

His former coworker, Maureen Harkavy, a Psychiatrist at Our Lady of Fatima Hospital, said, “We practice in a Catholic hospital, but there was not enough pastoral care going around as there used to be … [Br. John] had something to offer [patients] that no other psychiatric nurse could offer.”

Then at a nearby Divine Mercy Healthcare Conference, John discovered the Marian Fathers, impressed by their presentation.

With Br. John’s perseverance in prayer and devotion to Mary Immaculate — and against all the odds — the Marians accepted him.

In his homily during the Mass for Br. John’s profession of vows, the Very Rev. Fr. Kazimierz Chwalek, MIC, the provincial superior for the Marians’ province in the United States and Argentina, read an excerpt of the letter Br. John wrote petitioning for his final vows.

“In writing my original application, I recall saying I wanted to open the doors of the church wide for all those coming home to [the] Church, perhaps coming back for the first time. I wanted to be there, to be a sign of the welcome to the home of God … It is providential that I should have found my home, on the door of the steps of the Shrine, greeting and welcoming pilgrims to this magnificent chapel.

I have found no less of a home in the rooms of hospitals of patients in local facilities, making their needs my prayer. … I am grateful, too, for the many opportunities availed to me to introduce pilgrims to the powerful beauty and spirituality of our magnificent Shrine. … I have spent my life serving, from teaching to nursing, and now in hope of serving God and His people. I have sought purpose in my life, always searching for the deeper, broader purpose because my life had to mean something … and service was the only thing that seemed to make sense of me.”

After the ceremony, Fr. Kaz said, “Brother John has an unusual gift of being present to people. I am happy that he can use his gift because there are many, many broken people going through a variety of trials and difficulties, and I think they are drawn to him and he to them. … He’s able to bring them to Christ, to a deeper sense of His presence, His love. I think John will do well wherever he is stationed. … My wish for him is that he continues to give of himself as he does.”