Ever Heard of a Theological Anthropology?

Ever Heard of a Theological Anthropology? 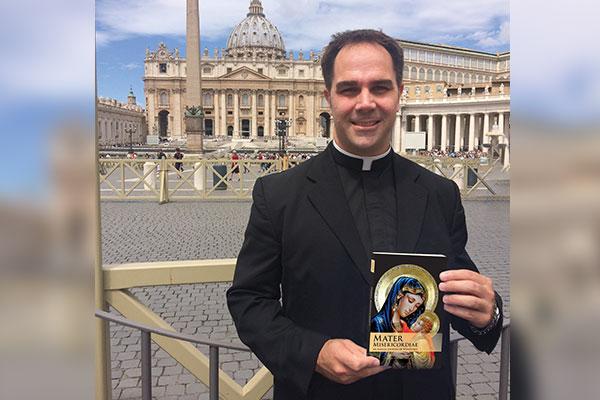 The Marian Fathers are giving an annual gift to the Church in the form of an academic journal on Mariology, Mater Misericordiae. Father Donald Calloway, MIC, spiritual director of the Thirteenth of the Month Club Newsletter, just edited the third volume of this journal. We sat down with Fr. Donald and learned why this edition’s topic, “Mary and Theological Anthropology,” is so important for our modern world.

Our culture has attacked basic human dignity on many levels, through abortion, homosexuality, transgenderism, etc. We’re having an anthropological crisis, so we need this type of study now more than ever. In particular, we need to contemplate the theological anthropology of Our Lady because she gives us the most perfect example of the human person. Jesus, of course, was human, but He was a divine person. Mary was the only perfect human person. We should strive to imitate her who imitated Christ.

Who developed theological anthropology?
There were three people in particular who were thinking about these anthropological issues at the beginning of the 20th century. All three of them were in concentration camps: Fr. Joseph Kentenich, St. Maximillian Kolbe, and St. Teresa Benedicta of the Cross (or Edith Stein). As millions were attacked and tortured, they were contemplating the significance of the human body, especially in relation to Mary. So during one of the worst attacks on human dignity in history, we get an answer to the question of what our bodies mean, how they reveal our inherent dignity.

What do these holy people have to say about embodied humanity?
Father Joseph Kentenich made some particularly important contributions to this area of theology. He founded a Marian movement called Schoenstatt, which focused on education — learning what it means to be a man or woman through studying Mary’s virtues. Many of these virtues aren’t learned through our parents. We have to learn what they are by looking at Mary from God’s perspective and modeling ourselves after her.

Similarly, St. Maximillian Kolbe says that we have to turn away from sin to become, in essence, transubstantiated into the Immaculate Conception. All of us ought to become another Mary. Saint Teresa Benedicta of the Cross says that women should not try to become other men. Despite the assumptions of our modern world, she maintains that women have qualities particular to them that the world cannot do without. She makes clear distinctions about what it means to be a man versus what it means to be a woman. Of course, all of this coming from a woman makes her argument that much more convincing.

Why the urgency in addressing theological anthropology?
It needs to be addressed because the world is running full speed ahead in one direction and they’re going the wrong way. Many people think that transgenderism and homosexuality are just normal. It’s in schools, it’s in the workplace. If you say anything against it, you’re in danger of being called a homophobe, getting sued, or losing your job. We need to teach people the truth about what it means to be human, about how important it is to strive for virtue. Then hopefully, the more we teach and embody the virtues of Mary, the more those around us will grow in virtue, too.