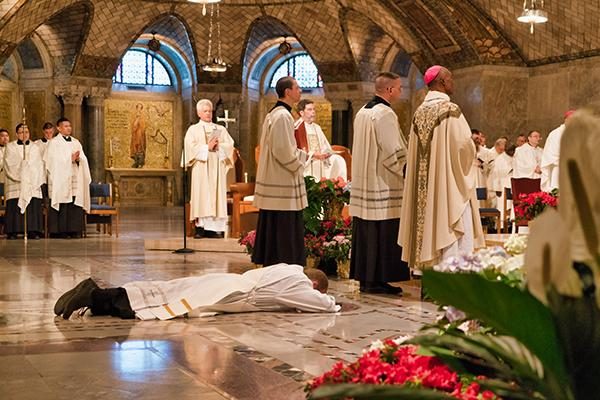 In the beautiful crypt church of the Basilica of the National Shrine of The Immaculate Conception, a spiritual son of Mother Angelica, the founder of the Eternal Word Television Network (EWTN), was ordained a Marian priest. Father Michael Baker, MIC, originally from San Diego, California, was filled with peace and joy on this momentous occasion.

Father Michael joined the Marian Fathers of the Immaculate Conception in 2010 after working as a television producer for EWTN.

In 2005, he moved from Southern California to Birmingham, Alabama, to discern a vocation with the Franciscan Friars religious community founded by Mother Angelica. She gave him the religious name Giovanni (Italian for “John”) Maria of the Most Sacred Heart of Jesus. This name spoke of his relationship to Jesus and Mary at the foot of the Cross. He knew Jesus was asking him to take Mary as his mother, just as He asked the Apostle John (see Jn 19:27). In turn, Mary took him as her son.

Although it ultimately didn’t work out with the Franciscans Friars, he had the opportunity to work at EWTN.

“It was a beautiful gift to be able to spend time with my spiritual mother,” Fr. Michael said. There, he received the call to his vocation with the Marian Fathers.

“In early October 2009, a week before my birthday, was praying in Our Lady of the Angels Chapel at EWTN. In front of the statue of Our Lady of Fatima, I heard Mary’s voice. She told me, ‘I’m going to give you a gift on your birthday, but you’re not going to figure it out right away.” The gift was my vocation. Since then, Our Lady has continued to walk faithfully with me throughout my journey. One of my greatest joys as a Marian has been learning to trust in Mary’s maternal guidance. I’ve continued to grow deeper in my devotion to her and see even more clearly just how necessary a relationship with her is.”

Father Michael chose to enter the Marian Fathers because of the Marians’ love for our Lord and Our Lady, and they are faithful to the teachings of the Catholic Church.

Father Michael’s mother, Anna, flew all the way from California to witness the special day. Also present were friends from his hometown and a group of young men whom Deacon Michael has ministered to on the campus of Franciscan University of Steubenville over the past six years. The young men are all part of a fraternal household called The Knights of the Holy Queen. The “Knights” as they are familiarly called, have had Marian Fathers as chaplains going back decades, even back to when the now-vicar general of the Marian Fathers the Very Rev. Fr. Joe Roesch, MIC, was at the Marian House of Studies in Steubenville, Ohio.

The ordaining bishop in attendance was the Very Rev. Martin Uzoukwu of Nigeria, a personal friend of the Marian community and of the newly ordained Fr. Michael Baker, MIC.

Surrounded by his family and friends, Fr. Michael wishes to extend his heartfelt gratitude to you, all of our Marian Helpers, for your prayers and support especially as he begins his priestly ministry.