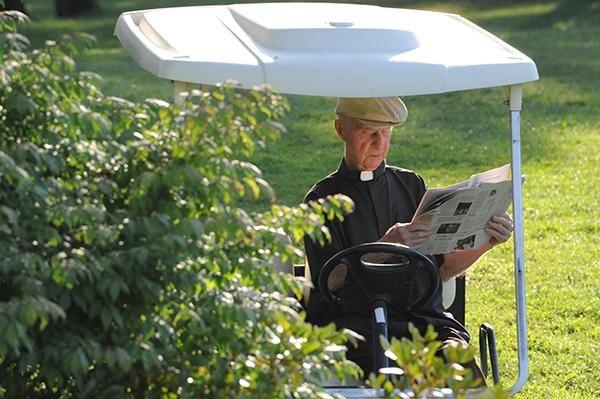 Father Martin Rzeszutek, a priest with the Congregation of Marian Fathers of the Immaculate Conception in Stockbridge, Massachusetts, died Aug. 19, from complications following several strokes.

Remembered as a gentle shepherd of souls, a polyglot, and an avid gardener and birder, he was 93.

Born on Sept. 22, 1925, in Easthampton, Massachusetts, to Frank and Angela Rzeszutek, Fr. Martin was one of nine children.

Following graduation from public high school in Easthampton in 1942, he joined the Marian Fathers and served in many roles and many locations throughout his religious life.

He first moved to the Marian house in Washington, D.C., where he entered the novitiate in preparation for his religious vows. He professed his first religious vows on Aug. 15, 1943.

He received his bachelor’s degree in philosophy from The Catholic University of America in May, 1948. He then was sent to Rome, where he received his licentiate degree in theology at the Angelicum in 1951.

Immediately following his ordination, he returned to Washington, D.C. His duties included preaching missions in parishes in the Eastern part of the United States. In 1956, he was assigned to the Marian house in Stockbridge, serving various administrative and pastoral positions.

In 1958-59, he was assigned to the Marian Mission House in Detroit, where he would continue preaching missions in the Midwest until 1965.

He then returned to Stockbridge and served as secretary and first counselor of what was then called the St. Stanislaus Kostka Province. He served in these roles until 1969, when he was sent once again to Rome. There he served as secretary general for the Marian Congregation worldwide.

He then served as superior of the Marian Scholasticate in Washington, D.C., before being assigned to the Marian monastery in Balsamao, Portugal. In the 1980s, he served in Fatima, Portugal, as director of the Marians’ pilgrimage center there.

He was then assigned to Stockbridge in the early 1990s, where he ministered at the National Shrine of The Divine Mercy and served various administrative roles.

In the early 1990s, he was assigned to Brookville, Maryland, the Marians’ novitiate at the time. Then, in 1996, he was assigned to Bernalillo, New Mexico, to serve at the Southwest Divine Mercy Center. That assignment lasted until 2003, when he returned to Stockbridge.

He remained in Stockbridge for the rest of his life. He was known as a great confessor. He spoke many languages, including Polish, Italian, Portuguese, Spanish, and German. He was a gifted proofreader and writer and contributed to many of the Marians’ publishing projects.

With farming skills honed in his youth, he grew vegetables on the Marians’ Eden Hill property in Stockbridge. Through last fall, he could be found in the orchard picking apples for pies that he would bake for friends and fellow Marians.

He was a promotor of bluebirds. He would give homemade bluebird boxes to anyone who had land conducive to a bluebird habitat. He maintained dozens of boxes throughout the Eden Hill property.

Father Martin is survived by his sister Helen Yagodzynski of Hatfield, Mass.  He is predeceased by his sisters Mariana Wozniak, Sophie Dusreane, Mary Yamer, and Josephine Rzeszutek, and his brothers Joseph, Stanley, and Walter.

A viewing and wake service will take place from 4-7 p.m. on Wednesday, Aug. 21, at the Marian Fathers’ residence adjacent to the National Shrine of The Divine Mercy (with Rosary and vespers at 5 p.m.). The viewing will continue on Thursday, Aug. 22 at the National Shrine starting at 8:30 a.m., followed by a funeral Mass at 11 a.m. Burial will take place after the Mass at the Marian Cemetery on Eden Hill.