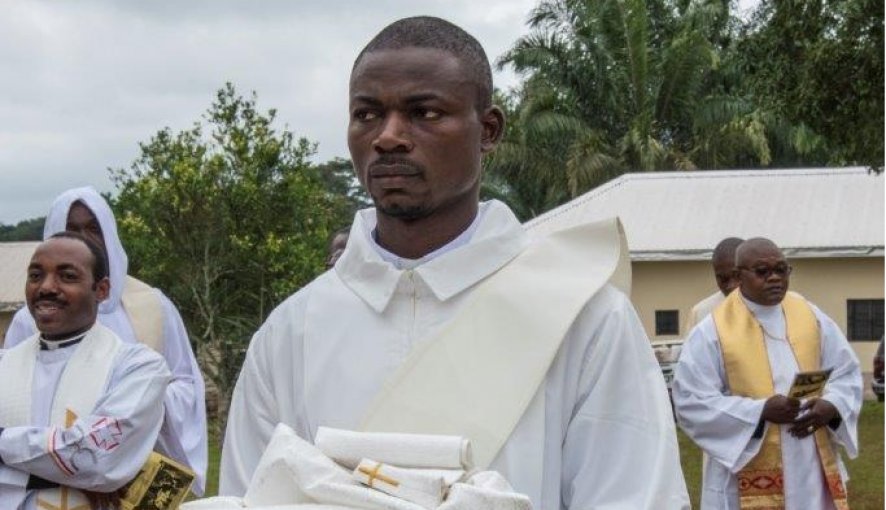 “O Lord, you know everything, be merciful to me and lead me by Your hand.”

Holy orders are a great grace and a gift of God; they are not bestowed as a result of our own merit or achievement. However, preparations are necessary to accept this gift worthily and to live out the ceremony with dignity.

At the site of the recent ceremony of the Ordination of Fr. Rogatien Ntsana, our parishioners from Atok, in Cameroon, aided by members of our second Marian parish in Minkama, raised funds to cover the cost of the reception and contributed food items. Families and friends of our seminarians also gave gifts. A youth group, joined by volunteers, helped with tidying up the mission and decorating the church and parish house for this event. Preparations for the liturgy and choir practice were under the care of our Marian clerics. Additional drums and balafons1 were brought in to further enhance the ceremony.

In anticipation of his ordination to the priesthood, Deacon Rogatien Ntsana made a weeklong retreat at the Oasis of Peace Shrine in Mbalmayo.

The ceremony of his ordination took place Saturday, August 3, 2019. The faithful began gathering in the church in the morning. While waiting for the Holy Mass to begin, they recited the Rosary and the Divine Mercy Chaplet. Before the celebration opening, a seminarian, Arsène, presented the course of the liturgy and the biography of the candidate for ordination.

Father Francis Filipiec, MIC, welcomed Bishop Jan Ozga, as well as the local King of the Maka people, representatives of the authorities, the clergy, members of Rogatien’s family, and the faithful.

In his homily, the bishop emphasized the aspect of service in pastoral ministry and the need for close relationships with God and the people to whom he is sent. Our seminarian Brice provided explanations to the rite of ordination, so that the faithful could understand the meaning and significance of the procedures. Led by the cantor, everyone in the church chanted prayers for the intercession of the saints on behalf of the candidate for ordination. The chanting stopped at the moment when, following the bishop, all concelebrating priests first placed their hands on Rogatien’s head, and then raised them in a gesture of prayer. Up until the end of the prayer of consecration, everyone remained silent. After that, Rogatien Ntsana was proclaimed a priest, which was met with loud cheers and applause.

During the liturgy, abundant in symbols, mysteries of the Sacrament of Ordination — donning a chasuble for celebrating the liturgy, anointing of the hands, presenting with a chalice, and giving a kiss of peace — were explained.

As Fr. Rogatien confessed later, he felt very moved, overwhelmed with emotions due to experiencing the great mystery of Ordination to the Priesthood. Words of thanksgiving poured out from his heart: “O Lord, You know everything, be merciful to me and lead me by Your hand.” He also experienced the great power of God who called him, was faithful to His promises, and enabled him to carry out his mission. These were the fruits of God’s mercy.

At the end of Mass, the newly ordained priest said that he felt greatly indebted to all those whom he met on his road. He expressed gratitude to many diocesan priests, nuns, his family, and friends. All these people made possible his path to the priesthood.

In conversations with people who attended the ceremony, we heard of their experiences of this event. Most of them mentioned being much moved by the liturgy, which took place in an atmosphere of prayer with inspiring songs. Some people felt strengthened in their vocation and faith. Others said they received a gift of joy. A special meaning to this ceremony was communicated by the presence of our seminarians’ mothers, who consider themselves a part of one big Marian family. The Ordination of Deacon Rogatien filled us all with joy and thanksgiving. This was the eighth ordination in our Vicariate. To date, five Marians from Rwanda and three from Cameroon have been ordained priests. The next group of 10 seminarians is now in training at the seminary. Please pray for them.

1The balafon is a gourd-resonated xylophone, a type of struck idiophone.