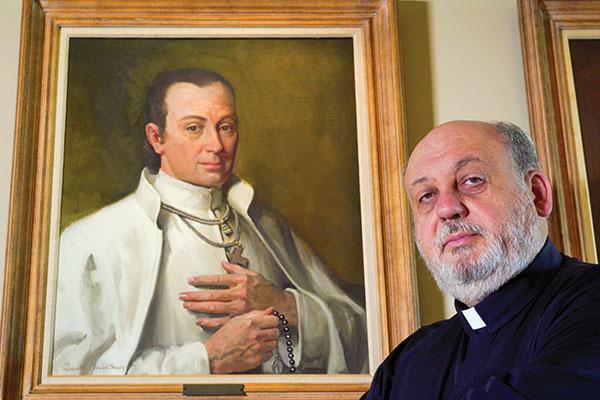 I want to introduce you to one of my boyhood heroes, a great Marian priest and humble man who we hope someday will be raised to the honors of the altar.

Why should you take an interest in the Venerable Servant of God Fr. Casimir Wyszynski (1700-1755)?

As vice postulator of Marian Causes of Canonization in North America and Asia, I receive many reports of graces received through the intercession of Fr. Casimir. Marians and Marian Helpers have discovered in him a powerful intercessor in Heaven.

I grew up in Our Lady of Lourdes Parish in Warsaw, Poland. This was a Marian parish, and therefore devotion to Mary Immaculate was ingrained in all things.

We, of course, were taught about the Founder of the Marian Fathers of the Immaculate Conception, Fr. Stanislaus Papczynski (1631-1701), who was canonized in 2016. But equally so, we were taught about this man, Fr. Casimir, who had a great deal to do with our Founder’s eventual canonization. Father Casimir wrote the first published biography on the future saint. He prepared the paperwork to initiate the beatification process for him as well. We have Fr. Casimir to thank for collecting eyewitness accounts attesting to St. Stanislaus’ virtues and sanctity.

It was Fr. Casimir who believed the most effective way to spread the Marian Fathers’ spirituality throughout the world was by working to elevate Father Founder to the honors of the altar.

I was always struck by Fr. Casimir’s love and loyalty toward our Founder and our Congregation. Of course, these two loves were rooted in his great love for the Blessed Virgin Mary.

Father Casimir wrote, “Christ left us, in His own Mother, the most perfect example of His life. She knew exactly the ways of God; her holy virtues show us how we should follow Christ. Only by imitating Mary shall we be her true venerators and servants. To imitate the Mother of God means to imitate most faithfully Christ Himself. More than all the saints, she knew Christ’s teachings and way of life.”

Father Casimir was driven by his love for Our Lady in all things. Indeed, his zeal to spread devotion to the mystery of the Immaculate Conception led him to join the Marian Fathers.

But his is not your typical vocation story. He was in his early 20s visiting shrines in Rome when he met a Marian priest, Fr. Joachim Kozlowski. The priest told him of disputes at the time within the young Marian Congregation and how Wyszynski’s own brother — a Marian novice — had done much harm. Particularly, his brother had banded with others who sought to ease religious discipline within the Marian Congregation and had also sided with a group seeking to disband the Marians entirely.

Moved by this news, the future Fr. Casimir said, “I want to make up for what my brother ruined.”

He quickly set about quelling an internal dispute within the Congregation, a dispute that centered on whether the Marians were to be a contemplative order or an apostolic order. A true spiritual son of the Founder, Fr. Casimir set about grounding the Marians as an apostolic religious congregation that serves where the need is greatest.

While fixing the wrongs of his brother, Fr. Casimir became a great reformer and builder of our religious community.

He referred to himself as a “thorn in the side” to those who would deny Mary’s Immaculate Conception. Mind you, this was more than a century before the Church would declare as dogma in 1854 that Mary was preserved from original sin from the moment of her conception.

He was a zealous promoter of the virtues of the Blessed Virgin Mary and the Blue Scapular. He guided his confreres and the laity toward more fully embracing Father Founder’s devotion to the souls in Purgatory. Moreover, he was a protector of the underprivileged, especially peasants abused by the clergy and upper-class people.

His fellow Marians elected him to serve in many leadership roles, including as superior general twice. All the while, he helped the Marian Fathers grow in merit and number. Under his leadership, the Marians became an international community and accepted vocations from all over Europe.

In 1753, he founded the first Marian monastery in Portugal, at Balsamao. He died there on Oct. 21, 1755. The beatification process for him began only a few years later. The Church declared him a venerable servant of God in 1989.

His earthly remains are enthroned in Balsamao, where the faithful still refer to him as “Santo Polacco,” the Holy Pole.

A final story I wish to share with you occurred in the 1950s. The Marians were in Balsamao exhuming Fr. Casimir’s remains and placing them in a new coffin. As they were doing this, the bells in the church tower started ringing without anyone tolling them — indeed, without any natural cause.

To this day in Balsamao, they still talk of “the miracle of the bells.”

Through that incident and through the many answered prayers through his intercession, Fr. Casimir makes his presence known.

Please email news about any cure or other graces received from God through the intercession of Fr. Casimir Wyszynski, requests
for biographies and prayers, or any other correspondence, to [email protected] or to the following address:

Vice Postulator of the Marian Causes of Canonization
Marian Fathers of the Immaculate Conception
2 Prospect Hill Road
Stockbridge, MA 01262
Prayer for the beatification of the Venerable Servant of God Fr. Casimir Wyszynski

Let us pray for the beatification of Venerable Casimir so that the whole Church may better know him and benefit from his powerful prayers.

O God, joy of the saints, make us glad by the raising to the honors of the altar of Your faithful servant Casimir and grant us the zeal to imitate him on our way to holiness. Amen.

O God, Merciful Father, in the heart of Your Servant Casimir, You aroused such a great zeal for accomplishing corporal and spiritual deeds of mercy; deign to grant to me (to us) through his intercession the grace … for which I (we) implore You. Amen.

Our Father … Hail Mary …
Glory be to the Father …

NOTE: It is recommended that this prayer for a particular intention be complemented by Confession and Holy Communion.