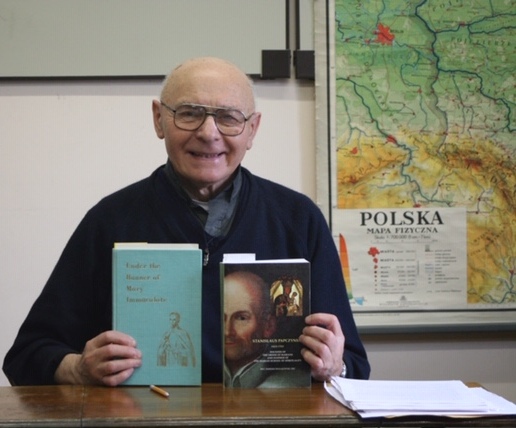 Rev. Casimir (Kazimierz) Krzyzanowski, MIC was born in Lublin, Poland on January 17, 1923. He did his schooling in Lublin and after the occupation of Poland by the Germans in 1939, he moved to Warsaw where he passed his secondary school final exams and began his underground electrical engineering studies at the Polytechnic Institute in Warsaw.

He fought alongside his brother Seweryn with the Polish Patriots in the Warsaw Uprising. In 1944, he became a prisoner of war in a camp in Austria. At the end of the Second World War, he was freed from the Camp by the Americans and he joined the Second Polish Corps under the command of General Władysław Anders. This Corps was under the British Command in Italy. In 1946, he was transferred for the demobilization to England where he continued his studies at the Polytechnic Institute in London. In 1948, he abandoned these studies when he was accepted as a candidate to the Congregation of Marian Fathers there.

In 1949, he went to the United States where he made his novitiate and in 1950, he professed his first religious vows. He then studied philosophy and theology at the Catholic University of America, obtaining a licentiate degree. He professed his final vows in 1954 and was ordained to the priesthood in 1956.

In 1958, he was transferred to Rome. He undertook studies at the Angelicum. At the end of his studies, he received a doctoral degree in Moral Theology. He then became the Assistant to the Postulator General. He wrote the Positio for the beatification cause of our Founder, Saint Stanislaus of Jesus and Mary Papczyński. He also prepared the text for a popular book on the life of the Founder called Under the Banner of Mary Immaculate and later on the Collected Writings of St. Stanislaus in its original Latin version. His lifelong work together with his extensive historical research had a tremendous and undeniable impact on the beatification process of our holy Founder. Father Casimir also served our Community with his deep and well-known knowledge of the Latin language.

From 1975-78 he briefly returned to the United States to serve in the offices of Local Superior and Provincial Secretary in Stockbridge, MA.

He was called back to Rome in 1978 where he also worked on the beatification cause of the Venerable Servant of God, Casimir Wyszynski. Through the years in Rome, he also served as Secretary General, General Councilor and Procurator General. He was a member of the Institute of Marian History and Spirituality.

In 2005, he was transferred to Washington, D.C. where he remained until his death. For many years, he contributed to the formation of the novices in the United States by teaching a three-week course on the history and the spirituality of the Marians. Because of failing health, he spent the last year of his life being cared for in the Nursing Home of the Little Sisters of the Poor across the street from the Marian Scholasticate. Being strike with many physical aliments in the last couple of years he bore them patiently and with the submission to God’s will. He died on his 97th Birthday on January 17, 2020.

Father Gabriel Cillo, MIC and our young confreres from the Washington house were with him on January 17th. Fr. Gabriel shared with us a very touching description of the last moments of Fr. Krzyzanowski’s earthly life. At the bedside of Fr. Casimir there was also one of the Little Sisters of the Poor who asked the Marians to say or sing something in Polish. Since nobody from the group could speak Polish, Fr. Gabriel put St. John Paul II praying the Rosary in Polish on YouTube and then tears started coming down Fr. Casimir’s face for a few minutes. After about two decades of the rosary, Fr. Krzyzanowski peacefully departed for the House of the Father precisely at 6:54 PM…

Father Casimir Krzyzanowski will be remembered for his regular religious observance, and for his deep piety to our Blessed Mother and to our holy Father Founder. For many years together with his brother Seweryn, Fr. Casimir would annually obtain food and clothing to help needy families and orphans in his native Poland. It was something that he deeply cared about. In his spare time, he enjoyed reading, listening to music and watching movie musicals on T.V.

May he rest in Peace and may our Founder, Saint Stanislaus – whose sanctity – Fr. Casimir promoted throughout his entire religious life, intercede for him before the throne of our merciful Lord.