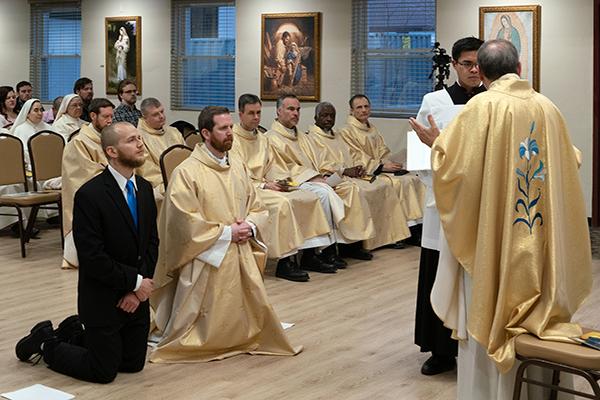 Just two hours before kick-off of Super Bowl LIV on Sunday evening, the Marian Fathers celebrated their own special and extraordinary occasion — one requiring an intensive game plan in which the stakes are eternity itself.

Two men knelt before their religious superior, placed their right hands on the Gospel, and solemnly professed their first vows of chastity, poverty, and obedience as members of the Marian Fathers of the Immaculate Conception.

Nicholas Medley, from the diocese of Santa Fe, New Mexico, and an alumni of Franciscan University of Steubenville, thereby became “Br. Nicholas, MIC.”

“My heart is so filled with gratitude to God,” said the Very Rev. Kazimierz Chwalek, MIC, provincial superior of the Blessed Virgin Mary, Mother of Mercy Province.

Father Kaz accepted and confirmed the men’s one-year vows on behalf of the Marian Fathers and the Church before a crowd of family, friends, and Marians. With the National Shrine of The Divine Mercy closed for renovations until Ash Wednesday, the event was held in the nearby St. Faustina Welcome Center.

May God accomplish this in me with the help of this holy Gospel and the intercession of Mary Immaculate, St. Stanislaus our Founder, and all the saints.

In his homily, Fr. Kaz remarked that the day of the vows, Feb. 2, also marks the celebration of the Feast of the Presentation of our Lord in the Temple and the World Day of Consecrated Life.

“It’s a wonderful day to celebrate first vows,” said Fr. Kaz, “marking the day the Son of God is entering the Father’s house — a beautiful moment of encounter with God, encounter with the Messiah.” And the World Day of Consecrated Life serves as “a reminder,” he said, “that Christ shows us who we are. He shows also our destiny.”

Father Kaz urged the men to model their lives, their religious calling, their every action on Christ Himself.

“He lived a life of obedience to the Father, absolute obedience, even to the point of death, as you know, in His humanity,” Fr. Kaz said. “He lived poverty. He lived absolute purity.”

Father Kaz said, “The religious life is a gift of God. It is not our choosing. Rather, God has chosen us to bring great fruit, blessing upon this humanity, this world.”

The religious life has another model, as well, he said: Mary Immaculate, who said, “May it be done to me according to your word” (Lk 1:38).

“As you enter the vows, what do you say to God? ‘I want to be like You, Jesus. Help me to be like You. Help me to overcome my own humanity.’ … Through vows, God is asking us that we say ‘yes’ to Him completely — that He is enough for us. Through vows we are saying to Our Lady, ‘Help us. You are our Mother. We are your sons. We need you because we can’t do it alone.'”

Father Kaz then presented the two professed Marians with the Blue Scapular of Our Lady, which serves as a sign that they hereby honor and imitate Mary and give to Christ their undivided service in the Church.

Brother Nicholas was then led to a changing room where he, for the first time, donned ecclesiastic garments. The change of clothing symbolizes putting away of the old life and taking up of the new. Father Kaz prayed that God “remove from your heart the vanity of this world, which you renounced at your Baptism. May the Lord vest you in ‘the new man,’ who was created according to God in justice and true holiness.”

Before beginning the liturgy of the Eucharist, the newly professed men stood before the crowd who gave them an extended round of applause.

Father James’ path to the Marian Fathers began in 2017. He had been working with youth in Ireland and utilizing the Marian consecration book 33 Days to Morning Glory by Fr. Michael Gaitley, MIC.

“From that, we did a conference in July 2017, and we brought in Fr. Michael,” he explained. “He came back that October and did a consecration around the country where he spoke in six venues in five days and distributed something like 70,000 copies of 33 Days to Morning Glory. It was amazing.”

Father James said that joining a religious congregation had been on his heart since his calling to the priesthood began.

“Mary and Divine Mercy had always been a part of my spirituality,” he said. “When I met Fr. Mike and learned more about the Marians, I thought, ‘Wow, this could really fit.'”

With permission from his bishop in Derry, Fr. James spent the past year living with the Marian Fathers at their House of Studies in Washington, D.C. There, he immersed himself in the Marian spirituality — including devotion to the mystery of the Immaculate Conception and the souls in Purgatory — and studying the life and writings of the Marian Founder, St. Stanislaus Papczynski.

Father James is now stationed in Stockbridge, working with Fr. Michael in the Evangelization and Development Office.

“Their thoroughly Marian devotion resonated with me,” he said. “As I was discerning, I kept seeing all these connections with Divine Mercy and the Immaculate Heart of Mary, and it seemed like Our Lady was drawing me along a particular spiritual path, and the Marians were always in that path.”

Brother Nicolas attended a “come and see” retreat with the Marian Fathers in the spring of 2017, during which he experienced what he calls his “Aha!” moment — realizing that Our Lady was guiding him to someday be a Marian priest. He was accepted into the Congregation in the spring of 2018.